Hunting Hyena - How many have hunted one?

TOM said:
I'm in final prep mode for a trip to Zim in August. In addition to buff, i would like a hyena. I have spoken with several people and have been told that intentional hunts for hyena are difficult. Most hyena taken are through random encounters.

Has anyone here taken a hyena? Was it purposeful or opportunity?
Click to expand...

I went Bowhunting near Limpopo, S. Africa with my Uncle...I had to use a crossbow because an automobile accident left me with little muscle in my left shoulder and I could not draw a compound bow back properly.

We were not hunting, specifically, for a brown hyena. However, during our trip, we came across three different brown hyenas. The first came within about 15 feet of my blind, in broad daylight.

The second ran in front of a guide vehicle, twice, and got hit by the back tire (and killed) the second time it ran out.

The third came on a night hunt, when I was hunting for bushpigs (I know, not a huge trophy, but still fun to hunt). I was able to shoot the hyena from a slightly elevated 10 feet away. One bolt, perfect shot from front shoulder through the lungs and out the opposite shoulder at an angle.

The hyena let out the most horrendous yelp, ran rampantly through the brush for about 20 yards and fell over.

Although I wasn't specifically hunting for brown hyena's, this was definitely a blast to hunt. It provided for one for most exciting hunts I've ever been on.

Member of
SCI and pr hunters association of Zambia

Hi Tom,
I saw your post about hunting a hyena - whereabouts in zim are you hunting? It will be spotted there like our ones here in Zambia. I have hunted several with guys with rifle and bow.We are fortunate that we have loads of them. They are crafty and lots of them are taken by chance but if you ask your PH , you can then focus on them and make a plan. They will need to be baited or called. Calling is extremely effective if it is legal in the concession you are hunting. If you are bowhunting , a pop up blind is a great help.
Good luck and hope you get one of the sneaky critters!!
T

I'd like to shoot one also. They look like the "hound from hell", I think it would make an interesting trophy.

I was on a 30 day safari a few weeks back and planned to hunt hyena around Gwayi in Zim. No luck with the baits. Had some plains game and small predator hunting to do in Limpopo along the Matlabas River and we went out for a few night hunts after putting out some very smelly old baits for both brown and spotted hyena. The brown were coming to bait but we always missed them. The spotted would not come to bait, but we would always hear them. We started calling them and spotted them three times. On the second occasion, the hyena's calling was loud and coming in fast. In pitch darkness we could here the big animal moving along the stony sand. When we hit the light I had less than two seconds to fire. The hyena dropped to the shoulder shot and as it kicked and carried on I gave it another in the spine. Beautiful animal with a massive head and awesome jaws and a clean, shaggy coat. The hyenas in this area are nomadic and play havoc with the cattle when they do come through. This property had lost 5 cows over two weeks and were very ken to give them a fright.
Rifle was a .300 Weatherby Mag with Leupold 4.5-14 x 56mm, 180gr Woodleigh PP @ 2950fps. Neither shot exited. Top trophy after 7 freezing cold nights out at winter's worst. One of my favoutite hunts if you can handle the cold and are happy to hunt at night.
If anyone is interested in hunting hyena, I would be happy to put you in touch with my PH. 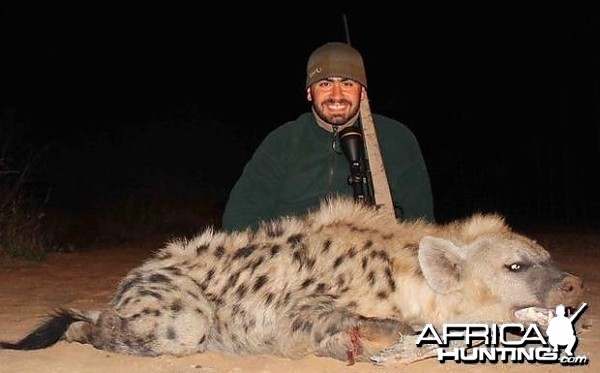 schembridan, man you look happy next to that bad ass nasty lookin beast! Hyenas are so bizarre I just love em. Thanks for the great story, I never knew that Africa could be that cold until I experienced it myself.

By the way what kind of call do they make to call them in?
T

NICE!!! That's what I'm talking about. I'd love to try that. The calling ,the cold (like New England), and the night hunting. Sign me up! Great trophy, thanks for sharing.

Thanks for the great picture and story behind the hyena. That sounds like a hard hunt for a wonderful trophy! Thanks for the post Schembridan!

safari hunter, the call we used was a steenbok in distress. We would play it loud for a minute then stop it, then repeat. Once we heard them calling, we would play it softly and for shorter periods. When we could hear the animals moving through the bush and their the crunching of sand under foot, it was "be quiet and get ready".

Attached a picture of thus guy's pearly whites. I think the jaws are more impressive then a lion's - a photo really does this no justice. 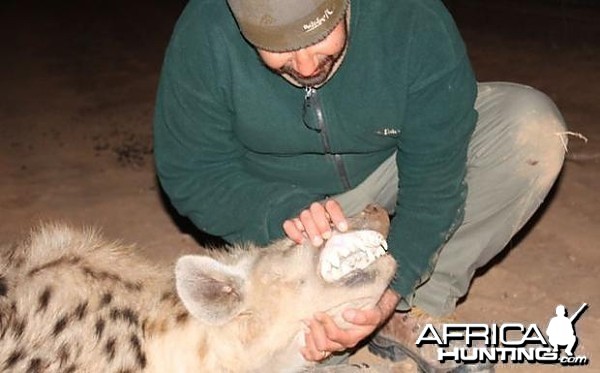 Thanks man. Those are some serious teeth there! BTW I just realized that your avatar is a piece of sh*t, funny.

Here is a big Spotted Hyena taken in Tanzania. 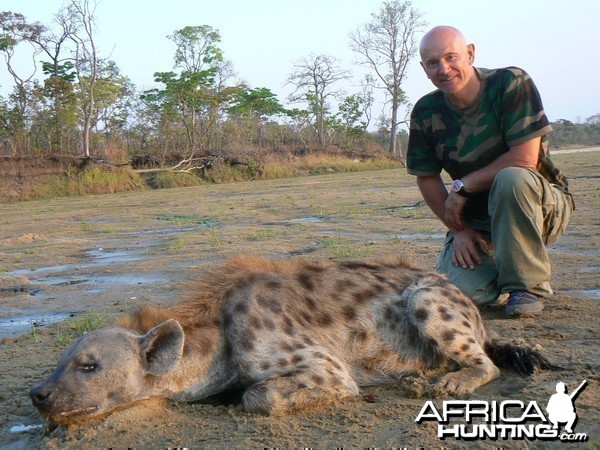 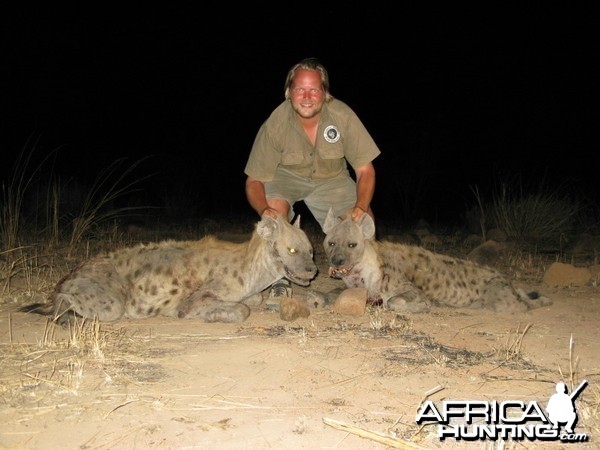 Last edited by a moderator: Dec 1, 2016
Anton Dahlgren
Check out my photos on Instagram at https://instagram.com/bwana.be/
S 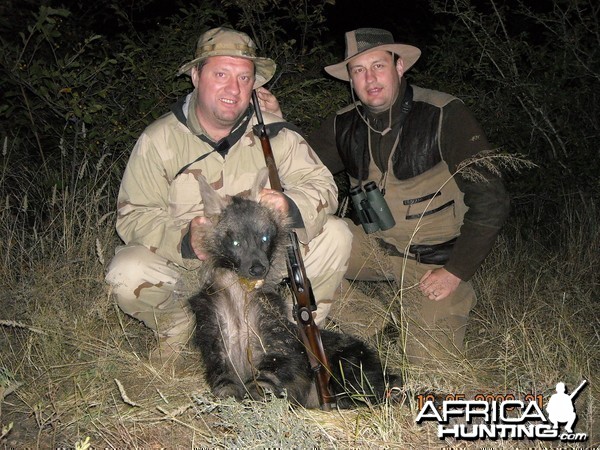 Nice double A.Dahlgren. Did you take one after the other? Don't know how big you are but the left hyena looks very big. Congrats!

Thanks, this was on the end on a 21 day hunt and we had seen the tracks in this hill every day. The first one came out running just after sunset (didnt need any flashlight) shot him running in the chest but i wasnt sure i had hit him ! One minute after the female showed up and i shot her in the chest also. The male was the smaller one and he was in poor condition, with a snare around his foot. 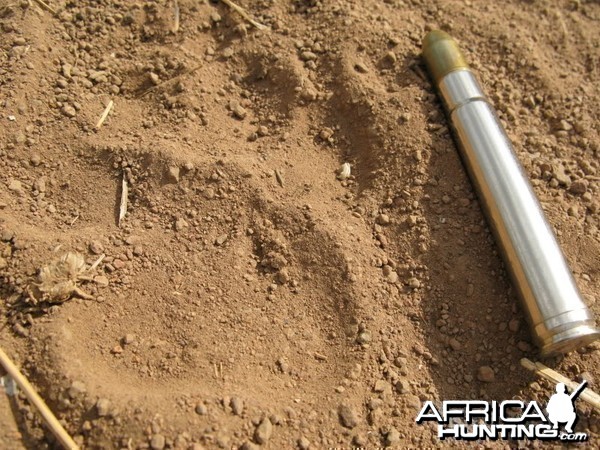 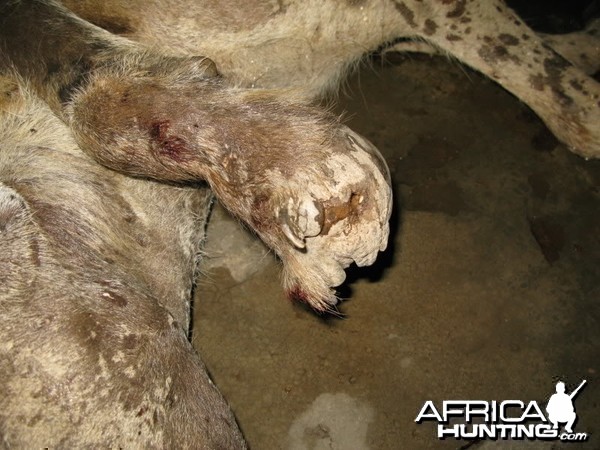 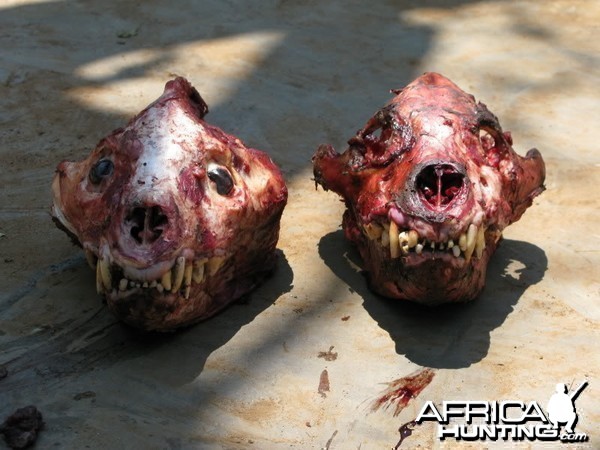 Last edited by a moderator: Dec 1, 2016
Anton Dahlgren
Check out my photos on Instagram at https://instagram.com/bwana.be/

Thanks for all the pictures and stories on the hyena. I sure hope I get the opportunity someday to hear one in the night and it would be awesome to shoot one. I think it's one of Africa's hidden gems in the hunting world. "The spotted hyena".
S

A.Dahlgren, curiosity gave you the second shot on the female, she came out to investigate. :guns: Good shooting. Those snares are nasty and cruel business. When I was in Namibia we came across a gemsbok wasting away barely alive in a snare, we put him out of his misery. I'd rather die of a bullet any day. That experience got me thinking about all the ways that animals die in nature and none are as swift and cruelty free as a well placed bullet. Thanks for the pictures.

I was asking my PH the other day and he was pretty sure that spotted was the only one that can be imported into the US. He is checking for me.
L

Member of
SCI and PHASA

We are only allowed to export the spotted hyena out of South Africa to the US, brown can be exported to Europe but not to the US.

I am not sure about Namibia though?

I just took a spotted in May in South Africa. It was one of the most exciting hunts I've been on. We set out to take Hyena and baited for them at a neighboring farm where they had been sighted previously. We couldn't get them to come to where we wanted them to eat, for some reason they would not go through the cattle fence. We finally decided to sit in the blind we had constructed and call them to see if we could get them on the bait with sound also. Let me tell you, the walls of a blind begin to feel really flimsy when you have two Hyena running up and down the fence 20meters to your left for about an hour vocalizing the entire time. We finally exited the rear of the blind to get a shot. The only mistake we made was not sitting tight after shooting the first one, thereby giving up any chance of a second that night.

I've got a rug and the skull on the way and can't wait to go back next year to try for another.

Yes, the trophy picture leaves a lot to be desired, it was about 2AM and it in itself is a long story.... 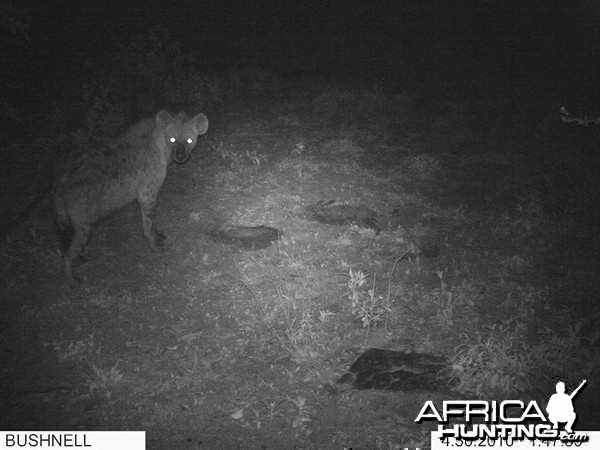 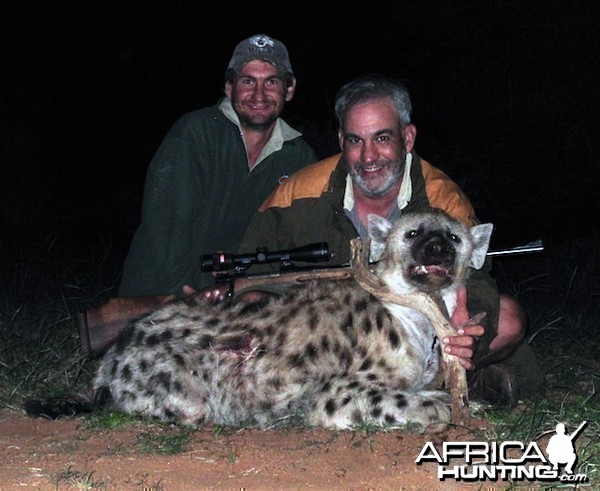 Hyena: Scavenger or Predator? The Human Influence on Hyena & Lion

No shortage of Hyenas In Ethiopia