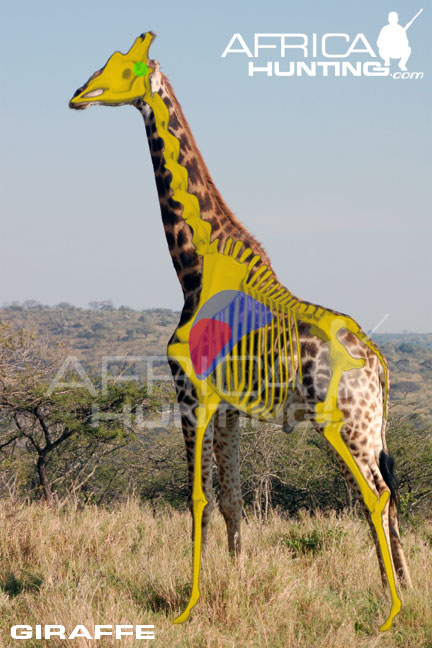 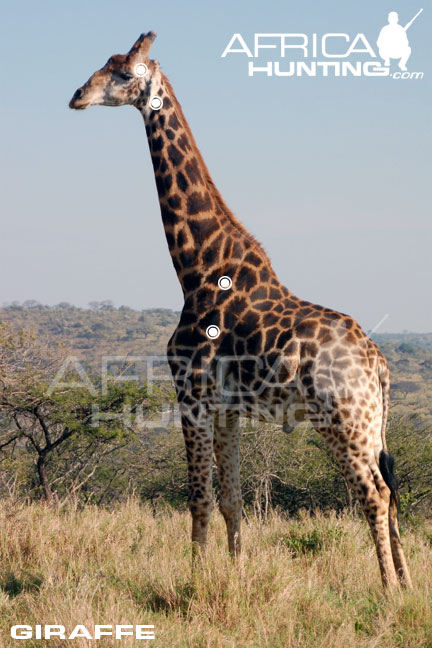 Hunting an animal that has a tree stand view

When hunting an animal that sees the world from a tree stand view one can often find the target animal standing facing the shooter. It seems very strange to hold and aim so high above level when not bird shooting or hunting mountain sheep. But it is correct and a well placed shot into the bushel basket sized heart will bring the behemoth down.

It is an awesome testament to their size and mass to see a bull at close hand absorb 225 grns from a 338 WM with only a heavy shudder before turning and loping off for several 10+ yard strides before the huge crash.

A lung shot giraffe will and can run a long way they are a lot of fun to hunt and for their size the cheapest of the big animals to hunt the recovery is an experience on its own. The neck shot is also a very good shot to take and quite spectactular when the giant falls over. The vertebra at the top of the neck is about 4-4 1/2" thick.
Keep the wind in your face and enjoy your hunt!

Here are a few interesting facts about Giraffes...

Just like humans, the Giraffe has seven neck vertebrae (although disputed by some zoologists who claim that it has eight), they are greatly elongated but other than that they are nearly identical structures.

A Giraffe's heart which weighs up to 10 kg (22 lb) and measures about 60 cm (2 ft) long, must generates approximately double the normal blood pressure for an average large mammal to maintain blood flow to the brain.

The Giraffe (Giraffa camelopardalis) is an African even toed ungulate mammal, the tallest of all land-living animal species, and the largest ruminant. The Giraffe is related to deer and cattle, but is placed in a separate family, the Giraffidae, consisting of only the Giraffe and its closest relative, the okapi. Its range extends from Chad in Central Africa to South Africa.

Both sexes have horns, although the horns of a female are smaller. The prominent horns are formed from ossified cartilage. The appearance of horns is a reliable method of identifying the sex of Giraffes, with the females displaying tufts of hair on the top of the horns, whereas males' horns tend to be bald on top, an effect of necking in combat. Males sometimes develop calcium deposits which form bumps on their skull as they age, which can give the appearance of up to three additional horns.

Giraffes also have slightly elongated forelegs, about 10% longer than their hind legs. The pace of the Giraffe is an amble, though when pursued it can run extremely fast, up to 55 km/h. It cannot sustain a lengthy chase.

The Giraffe has one of the shortest sleep requirements of any mammal, which is between ten minutes and two hours in a 24-hour period, averaging 1.9 hours per day.
Jerome Philippe, Founder of AfricaHunting.com 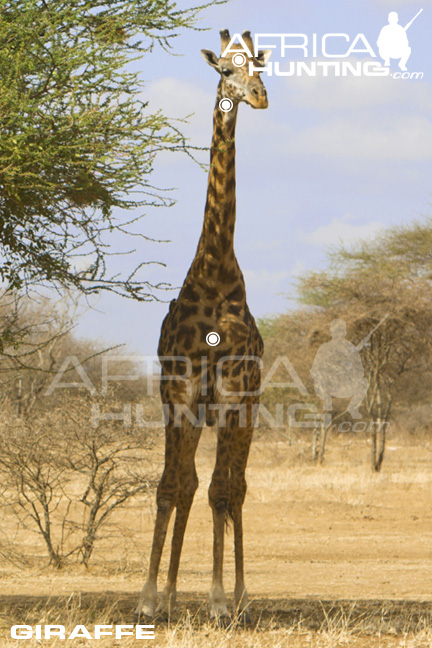 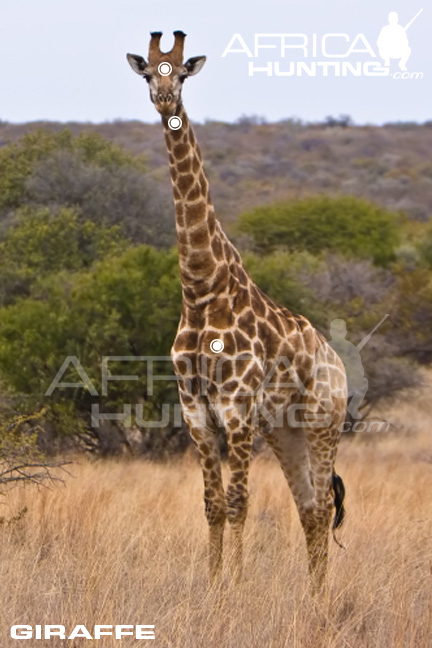 I'm planning a hunt in Namibia. Most of the hunt is typical plains game which my 30-06 will be quite effective on but I'm seriously thinking of adding a giraffe to the hunt. What caliber would you recommend for giraffe? Would a .338 Win mag work well or is that under gunned and a .375 H&H be the choice? I'm thinking of either Swift A-frame bullets or Barnes TSX.

225gr TSX in the 338 will work just fine just do your part in my opinion the 338 loaded with 225gr TSX is possibly the best plainsgame all round load you can use if it was legal I would let a client even use it on buffalo.

Just bear in mind a giraffe is not dangerous game but has a more solid body than a buffalo and a 1- 1/2" thick skin on those shoulders and low neck area.
Keep the wind in your face and enjoy your hunt!

Thanks for the information Frederik. It's solid frame and thick skin is exactly the reason why I was looking into the heavier round.

AfricaHunting.com said:
A Giraffe's heart which weighs up to 10 kg (22 lb) and measures about 60 cm (2 ft) long, must generates approximately double the normal blood pressure for an average large mammal to maintain blood flow to the brain.
Click to expand...

Wholely cow, 22 pounds? I didn't think it was that large. Shouldn't that make a kill shot that much easier?

A larger target, but it also requires a larger hole and more shock to affect it. A small hole and minimal shock and that ticker can keep working sending blood to the brain and body as I understand it. Throw in those long legs and I'm guessing they can cover lot of real estate fast.

I have hunted a couple of these blokes. In relation to the photos I would recommend placing the bullet a little lower in the head as in the picture. Old bull’s forms a lot off bone growth on the muzzle and between the 'horns' that will make the head seem higher between the eyes and horns. I bullet between the eyes for the frontal shot will do. Keep in mind that a soft might fail as it is a long way through thick bone to the brain. If I could recommend anything on hunting Giraffe is that a body shot is my preferred shot for its circulatory system runs on above average pressures and any hole in it will lead it to fail much more rapidly then say a Kudu.
M

I've seen many giraffe but I have had no desire to shoot one as a trophy in the past but with a lion hunt in Zim a possibility for '12 a giraffe is looking like an economical way to get some huge baits up quickly. My question is for people who are familiar with giraffe would you try the neck shot at the top where it joins the head? The giraffe I've seen will often stand and stare at you from fairly close range giving you time to place the shot carefully. Opinions?

Yes go for the neck shot with a stable shooting platform go for it none of our clients wanted to go for it yet would love to see it go "Timber!!!" hehehe.
Keep the wind in your face and enjoy your hunt!
M

Thx Fredrick. It just made sense that if the vertebrae were 4"-4.5" that the neck shot might be the way to go as it would avoid any chasing of the giraffe around the concession. I've had client shoot these guys too low and with inadeguate calibers causing a long and painful chase.

My one and only giraffe was a low neck shot with a .375. The plan was to take a heartshot, and I'd studied the charts and quizzed every PH that I could. When the time came however, the body was screened by brush and the neck completely clear. It looked like a crane falling over.

We took two giraffe in two weeks both neck shots both drop in their tracks. About one foot below the head to me the perfect shot on giraffe. 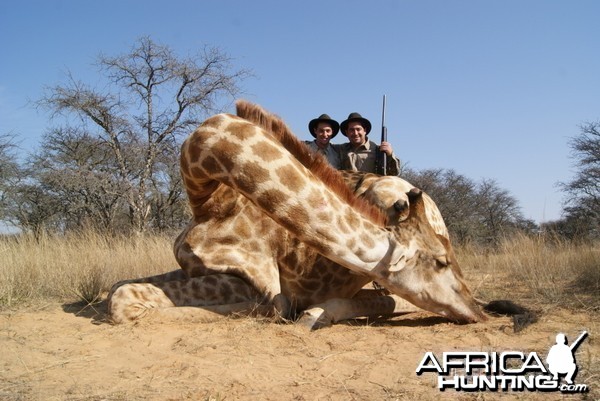 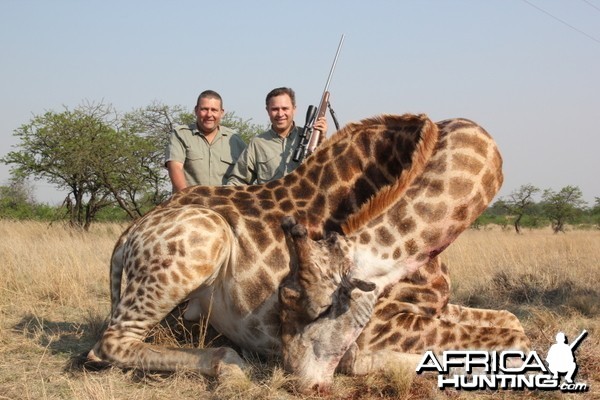 I recently bought a .375 Ruger for my giraffe hunt because finding a left handed .375 H&H proved rather pricey. If I go with factory ammo would the Hornady 270 grain soft point work or would their 300 grain DGX bullet be a better choice?

I would go with the 300 grain DGX bullet.
You must log in or register to reply here.