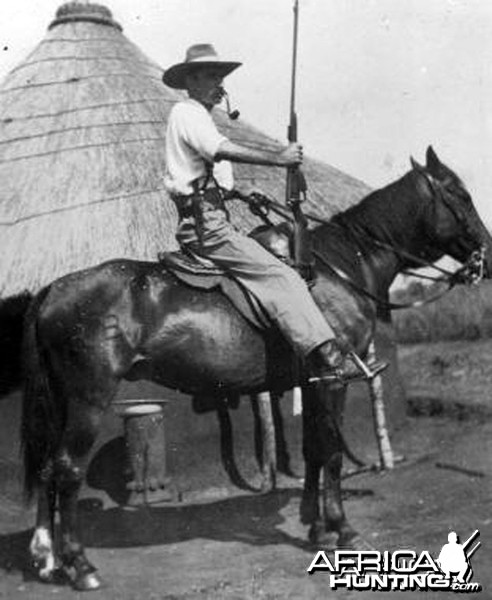 Harry Wolhuter was a legendary ranger in the Kruger National Park and completed 44 years of service before retiring in 1948. Born in Beaufort West, Cape, Wolhuter lived a life of freedom in the veld. From the time he could first remember he was a hunter, with a catapult, an air gun, finally graduating to an old muzzle loader. He and his friends made their own gunpowder and percussion caps from match -heads. At 14 he left school and started work in a trading store in Maraisburg, Transvaal. He later became a shepherd, a big game hunter, and, during the Anglo -Boer War a member of the colourful band of mounted soldiers known as Steinacker's Horse.

In game ranging Wolhuter found his true vocation. During his period of service he had the satisfaction of seeing his reserve, renamed The Kruger National Park, grow into, perhaps, the best - known and most popular wild life sanctuary in the world. He wrote: " My long experience has taught me that, thrilling through the pleasures of shooting undoubtedly are, infinitely greater and far more lasting pleasure and interest can be obtained from the observation and study of wild animals, unafraid and uninterfered with, in their natural haunts; and I have never regretted my metamorphosis from hunter to guardian!" Tall, spare, but powerfully built; purposeful, for all his quiet voice and unassuming manner, he seemed emblematical of the best type of pioneer hunter.

“His Memories of a Game Ranger” written in a most readable and modest manner were brought out in 1948 by The Wild Life Protection Society of South Africa. It is from this book that these extracts are taken .Wolhuter was riding on horseback along what is today the Lindanda Road , when two lions attacked him shortly after nightfall. Toppled from his horse, one of lions seized him by the shoulder, and dragged him almost 100 metres, into the bush. At this point, the semi-conscious ranger managed to retrieve his sheath knife from his belt and stabbed the lion.

The mortally wounded lion then dropped Wolhuter who managed to climb into a tree before the second lion came after him. Wolhuter believes he was saved by his dog, Bull, whose persistent barking at the second lion distracted it. Wolhuter’s assistants then arrived, and carried him back to camp.

After resting a day, he was carried in a litter, to get medical assistance. The party arrived at Komatipoort four days later. Wolhuter was patched up by a doctor and then sent by train to Barberton hospital where he stayed for several weeks..

A wound incurred after being dragged off by a lion, together with severe bouts of malaria, permanently affected his health. He retired in 1946. Wolhuter’s knife and the skin of the lion he killed are on display in the Stevenson-Hamilton Library at Skukuza. Wolhuter was known by his Swazi name, Lindanda. The name is derived from "lihiya", a type of loincloth worn by the Swazi people, and which Wolhuter himself was fond of wearing. He died in 1964.