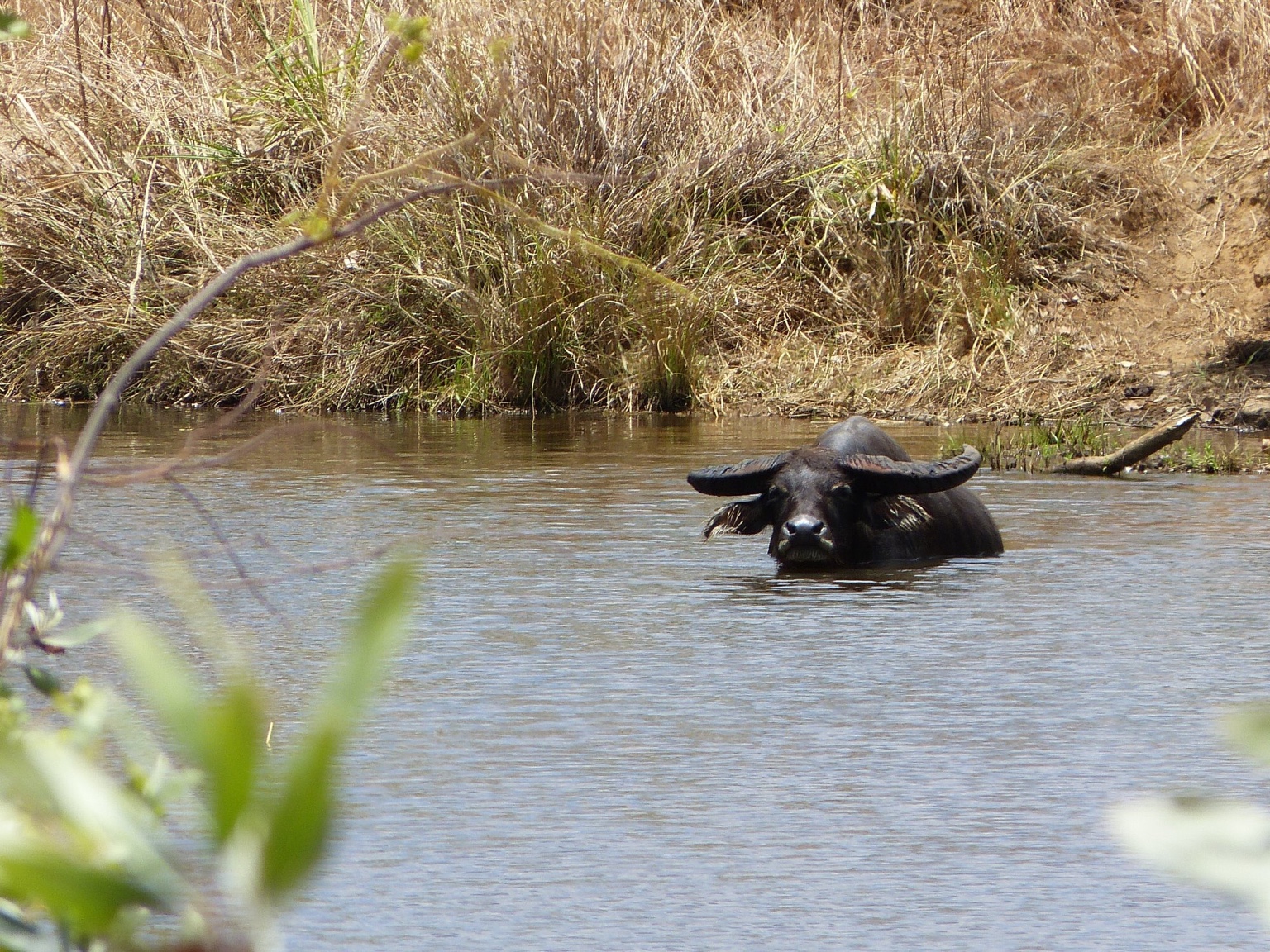 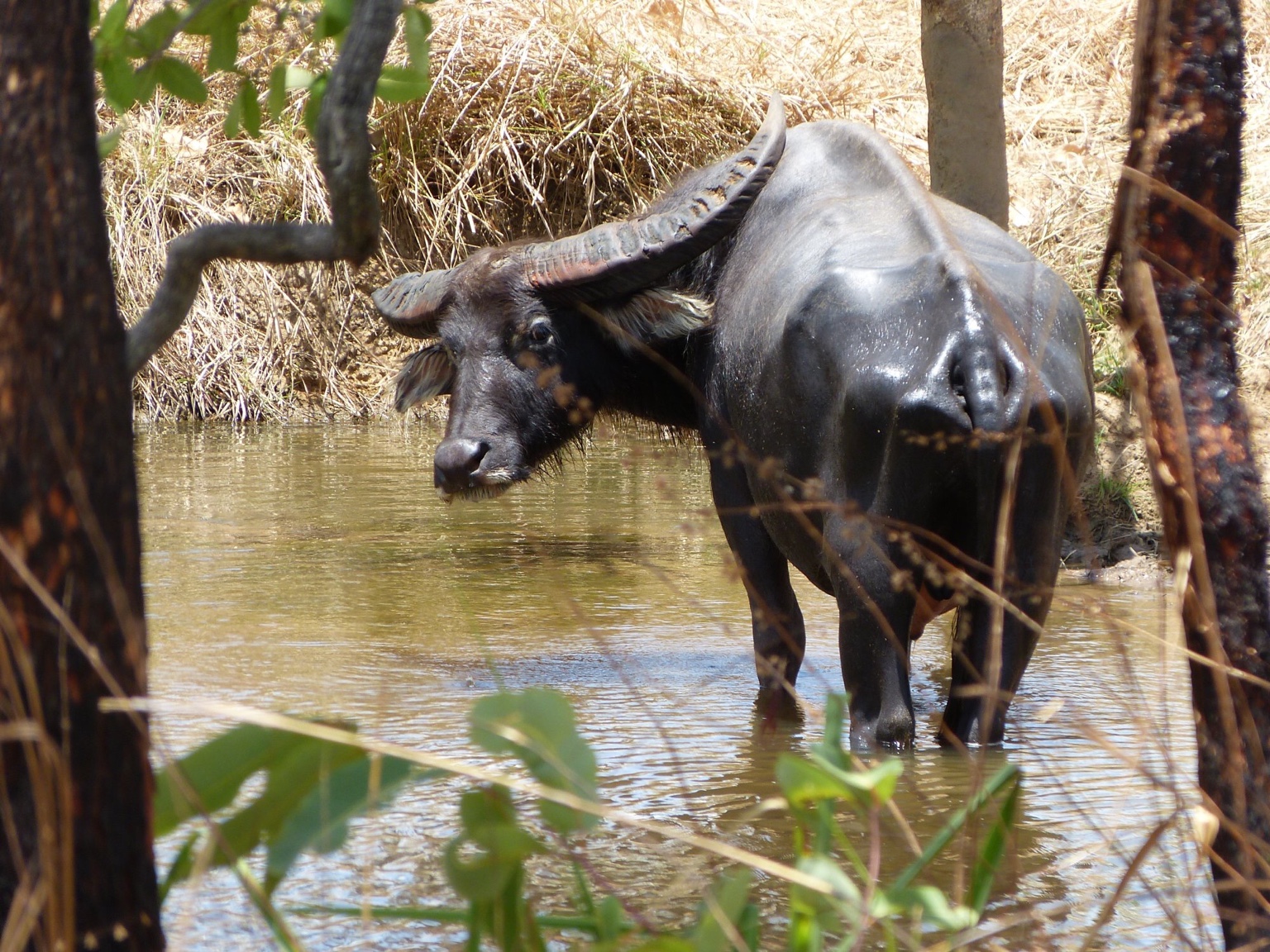 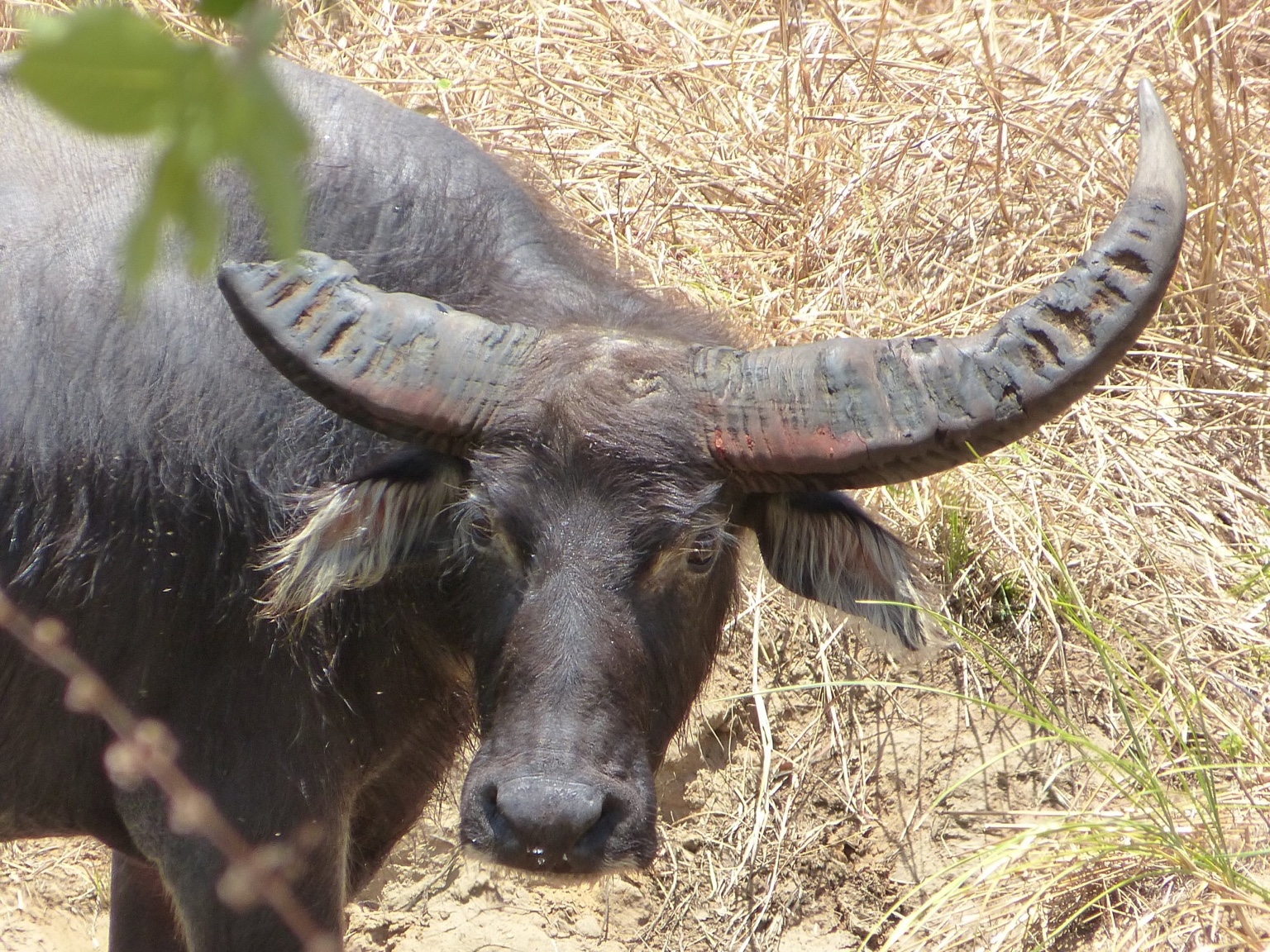 I'll say, man I want to get in close to those things one day. What camera are you running? Great snap.

I stole my wife’s Leica V-Lux 3 when she wasn’t looking! It is a really good camera. Sure beats my iPhone! Here’s the same bull the other day with my iPhone: 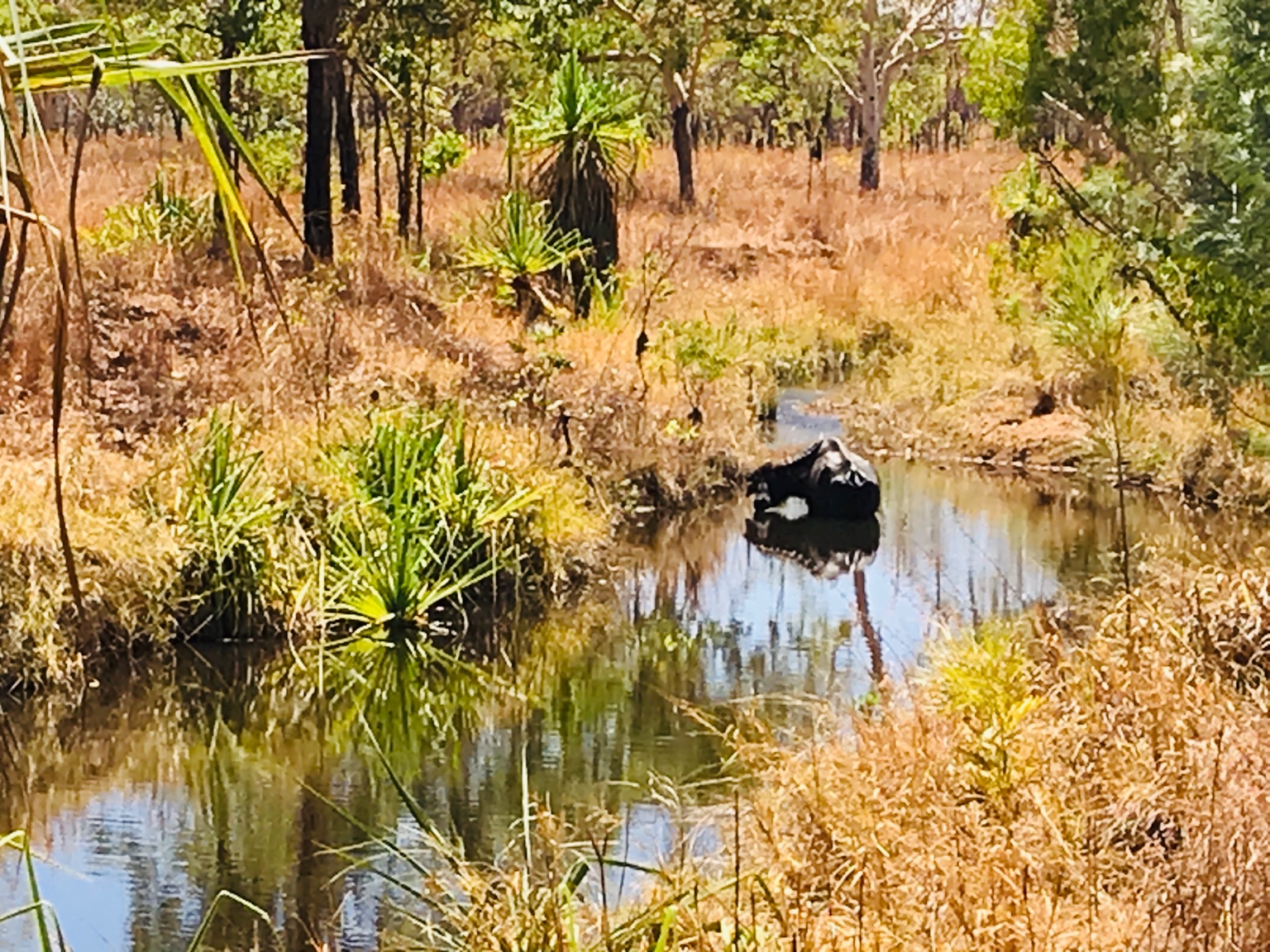 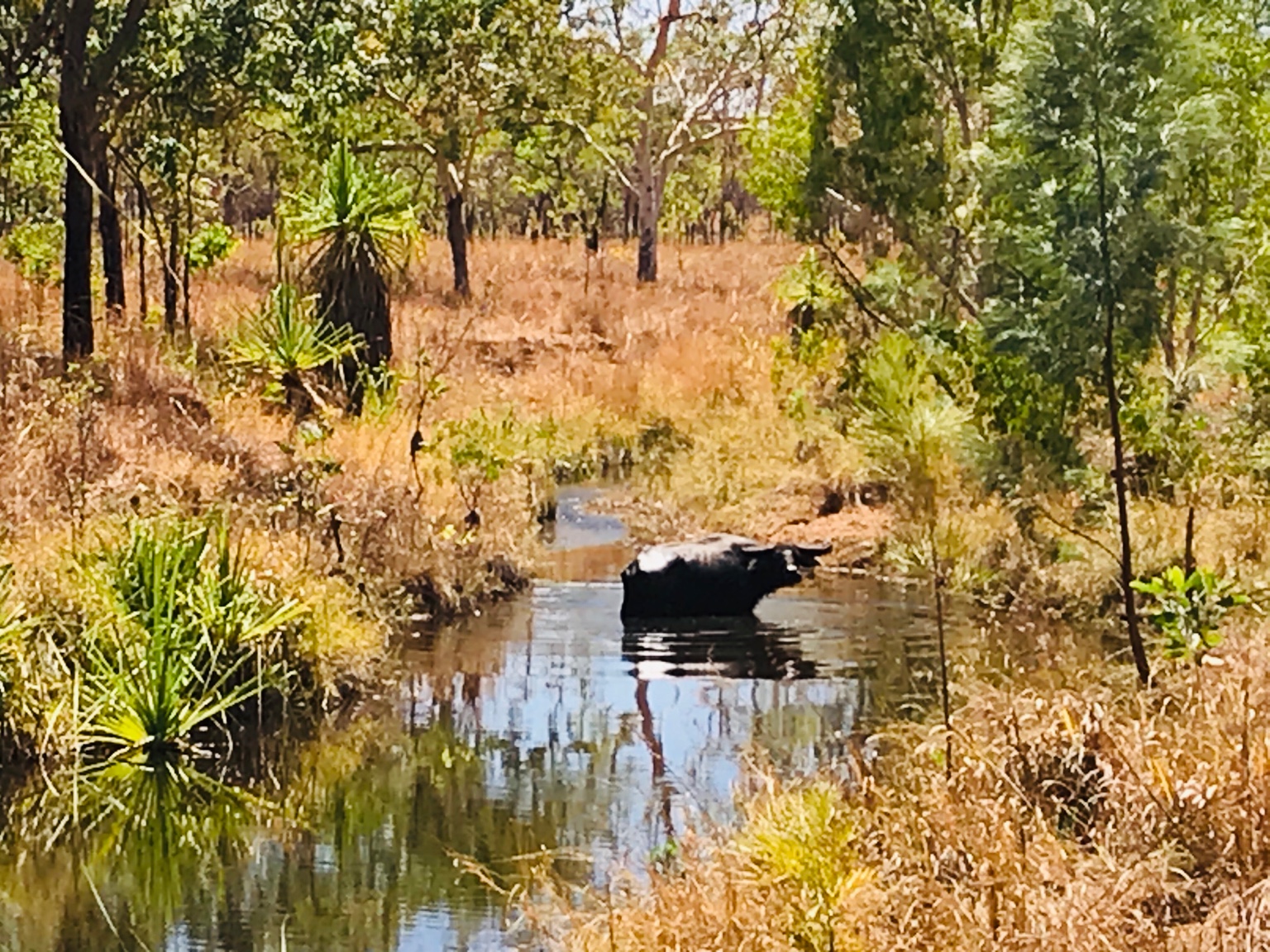 One fine old bull for sure! Very nice pictures!
Africa on my mind.

Cool pics! I really want to hunt one someday in the near future!
John 3:16

Great pictures, makes me want to come back for more of them! Great fun!
"Montana seems to be what a small boy would think Texas is like from hearing Texans" John Steinbeck

Thanks for bringing us along.
Glad he's got some water. It looks like he could use some more groceries though.

Here’s a picture from June 21 when we first discovered that he’d moved into the neighbourhood. 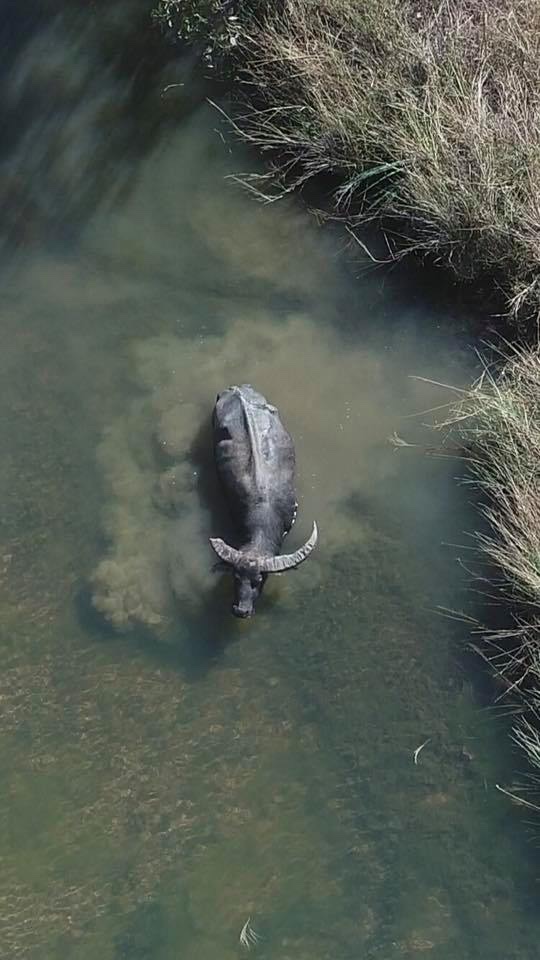 Until this week, our only contact was with the drone, checking once a week. This week we located him in person several times, as I really wanted to record him better on camera.

He seems to like rubbing his horns on trees, and I guess it must be soothing. One of his back legs is injured, and he walks slowly with a limp. I think he’s chosen a peaceful place in which to retire, away from annoying cows and calves and the prime bulls that would attend them and heap violence upon him. His area is a little too harsh for the cows and calves.

Here are some poor-quality iPhone pictures from a few days ago of him returning to water after hobbling long distances overnight in search of sparse grazing. Note the remnant barbed wire fence leftover from station days - he walked through both to get back to his patch of creek. 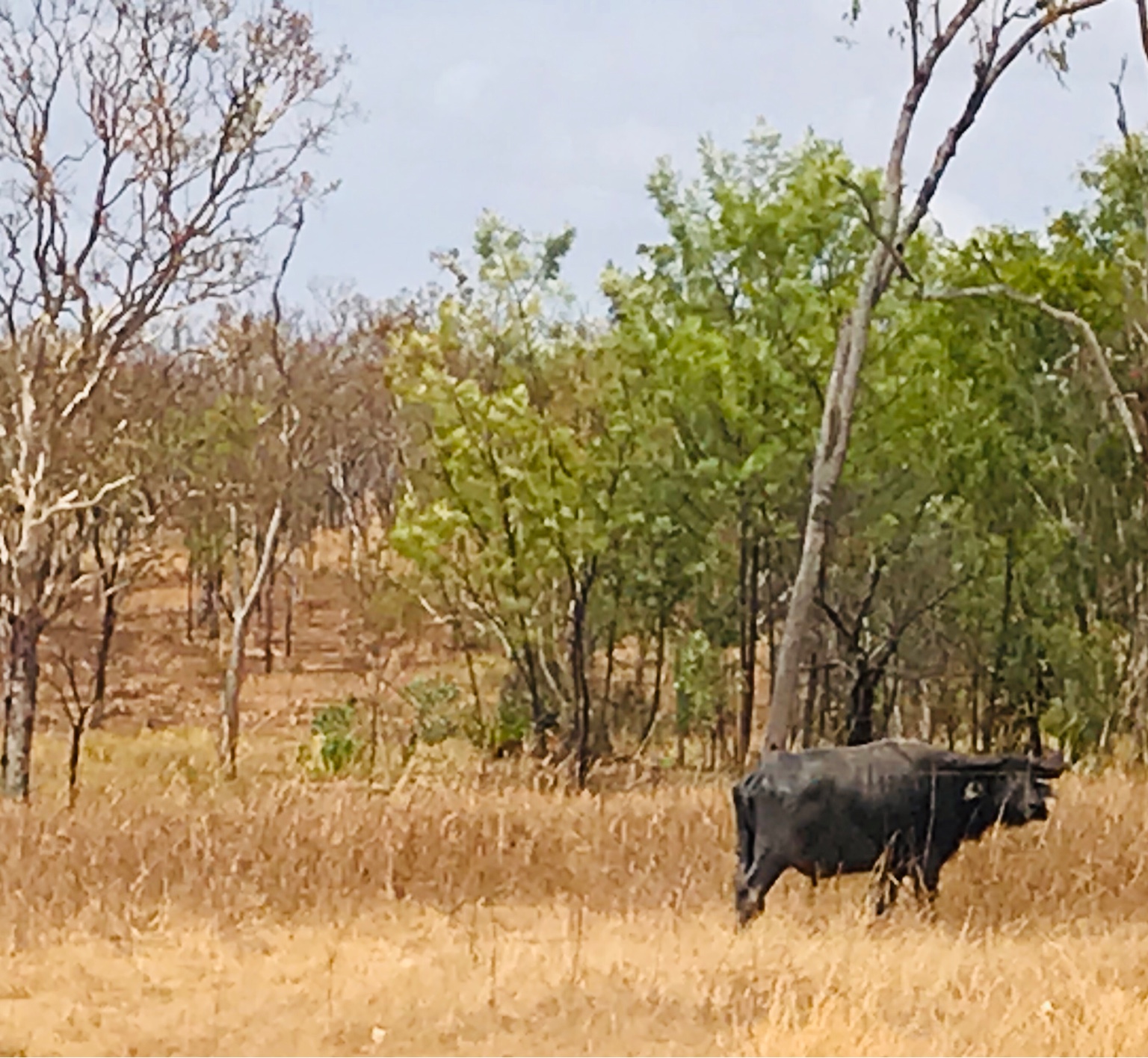 Interesting, at least to me, is to note features of extreme age beginning to show on this bull and i'm not referring to his physical condition.

The appearance of the face changing from the square, more masculine type structure of the face to a more gentle, "rounded", appearance of a cow, or even less mature bull.
The extended and re-growth of the white inner ear-lining hairs and the prominence of the white eye markings.
Also, most of the facial hair length and the re-growth of hair between the horns shows he has long given up the thought of head-butting other bulls for mating rights.

At a rough, un-scientific, aging guess i'd say your boy here is at least 13y.o, maybe older, and judging by his physical condition may not have another Wet season left in him.

(looking at the rear "hooks and pins" to spine ratio, he may even have a case of "rickets" which will cause him to walk stiff legged when he is walking away from you).

Thanks for sharing.
Paul Truccolo.

Thank you, Paul! I’ve learned something new from you! I’d not heard of rickets. Google seems to focus on young animals at a quick glance. Is this something you think this bull may have had since being young? I don’t know anything about the ratios you mentioned. If this bloke can last until the rains come, it might get a little easier. But I think he’s at that age where he’s deteriorating every day. He appears to have only days, weeks or months at best.

Paul, I’ve hunted buffalo from Douglas River to Wilton River, and the Roper River and Katherine River and Waterhouse River, and there is a mystery in a little area right here, a health mystery. In a small radius of twenty kilometres I’ve killed four sick young buffalo with at least one scissor hoof; I’ve killed a tremendous old bull with three-and-a-half legs (his rear right kind-of ended at the “knee” with a deformed little hoof growing out of it - this leg was completely useless, bearing no weight, never touching the ground, and just dangling); and I’ve seen a sickly, limping young bull with a deformed, strange-looking face, a kind-of massive hump of a Roman nose, very unsettling and weird. I’ve not encountered such strange things elsewhere, and it’s been confined to this one area. I’m happy to report that the majority seem normal and healthy!

My guess is that by thirteen or fourteen a bull is ready to perish. Have you ever watched the brilliant video on YouTube called the The Great Australian Buffalo Hunt? It’s from my old stomping grounds at Bulman, and the gentleman certainly knew more about buffalo than I ever will (actually, my good friend worked for him when he was young). But there’s the story of old bulls carrying fifty cal bullets from World War Two fighter planes, and I’m struggling with the mathematics of that (the video was shot about thirty years after the war).

Another thing: this wonderful old bull is so predictable about where and when he’s in the water. Yes, it’s hot, but he’s definitely spending more time in the water than others are, from what I can tell. I suspect the buoyancy the water provides is easing his aches and pains.

One heck of an old bull. Old warrior.
Bruce

Rickets effected buff seemed more prevalent after poor Wet seasons and I think that may be a result of the animals being less choosey of the type of feed that they graze on. I can't remember which plant gives it to them or if they recover from it or not (i'm sure there will be some cattle-men here that will know more about it than I do) but it wasn't uncommon in my area, as I said more so after poor Wet seasons.
Twice I was charged by cows suffering badly from Rickets, dodged one and climbed a tree the other time.
I ended up going back and shooting both of them as they were a threat to my local T.O's who used those areas for fishing.

I have no doubt that the Coastal areas provide a better environment for bulls to live longer. The higher rainfall, heavy dews and softer grounds provides more opportunity for those little green "oasis" where a tired old bull doesn't have to travel as far the get a good feed. Countering that is the sandy soil which grinds their teeth down faster and kills them anyway.
I am aware of confirmed reports that wild buffalo have been aged at 20 years of age and don't doubt that under ideal conditions this would be possible.

In my past, I am sure we took several that I estimated between 13 and 16, maybe older.
All taken within 1k of the coast and all taken late in the season, Oct/Nov a link I haven't figured out yet.
I'd kept several jaw bones with teeth in order to send them somewhere and have them aged only to loose them in a grass fire that burnt in to my camp one year.

As poor as your bull looks you'd be surprised at how long he could actually hang on for. I have seen them so poor that they look like nothing more than coat-hangers for their skin and yet see the same animal the following season.
They are tough animals !

I absolutely agree with your assessment of the effects of the water for this bull as most, nearly all, of the Rickets effected buff I have seen in the past have either been in the water or right next to it.
I think they must feel a fair bit of pain being up-right and maybe even just laying down.

I remember one sick young thing out at Bulman that had me scrambling to reach back to my better half who was carrying my double at the time. I got too close and he had a go, even though he didn’t weigh more than 150kg. I thought he may’ve been eating the little green eucalyptus suckers (truthfully I don’t know exactly what species they are, but they’re often the only green thing left). The Ranger Boss told me quite a few horses were falling-over because of eating that stuff, and some buffalo, too. How accurate that assessment is I do not know.

Perhaps this one is due to be retired to greener grazing grounds?

Great bull, but he does look hungry !

I knew rickets in dog pups is due to vitamin deficiency ,what would be causing rickets in Asiatic WB?

Paul, can you tell me how to tell the difference between rickets and plain old age and the injuries of battles won and lost? Was talking to a cattle guy here and he’s not heard of rickets in cattle in these parts.
You must log in or register to reply here.

What is the proper "Sight Alignment" for Express Sights?

C
What calibers would be needed for a proper dangerous game cartridge display?
2 3