A dangerous charge from Africa's Black Death, the African Buffalo.

Yikes I guess! Yep, shoot and keep shooting and shows how important it is to have confidence in cycling that action under stress. At that moment I want the biggest caliber I can shoot accurately with the best bullet for the job.
S

Oh, that Black Death, for a moment I thought there was some new pandemic crotch rot in Africa...lol

Cape Buffalo are on my bucket list for sure and that's why lol . Those buffalo are wild

R.M.C. said:
Cape Buffalo are on my bucket list for sure and that's why lol . Those buffalo are wild
Click to expand...

Statistics show charges like that are not common with buffalo but it occasionally happens. All it takes is one though... At that point it turns very serious and everyone with a capable rifle needs to know what to do. For example that is probably a buffalo that is ill, has an infection, has been injured, has recently had a fight with another buffalo or lion or has been perviously hit. If I were the hunter there and if I was involved in previously hitting that buffalo, I would have topped off my rifle and likewise the PH should have also. I would not feel comfortable with a 9.3 or 375 loaded with some 286-300 gr soft points. Sorry if that disagrees with those who advise and swear you need to stay with soft points so you don't shoot through a buffalo and hit another animal behind and should just let the PH clean up any mess like that. Good grief!!, shooting through that buffalo and hitting another behind it with a solid would be the last thing I'd be thinking about in that situation. If that buffalo was not previously hit and came out of nowhere, I would still feel a lot more comfortable hunting with a quality tough soft point on top followed by all flat point solids in the magazine. And I will not have all my solids in my loops or in a pocket waiting for the go ahead to load them. That would be like Barney asking Andy if he could load his revolver with his bullet after they had encountered a bad guy!!! Also, if following up a wounded buffalo, I would want to have the largest rifle I can handle, for me a 450 Watts, for others maybe even a 500 of some variety if they can handle it, loaded full of penetrating flat point solids. If a charge happens right at me, I'd be aiming right down the neck line centered about at eye line just below the boss hoping to drive a bullet, on axis, down that neck line and into the center of mass of the body. If the buffalo came with head up or head down I'd still be aiming right down that neck line toward the center of body mass. If coming at an angle, I'd be trying to put a bullet as centered as possible near the junction of neck and shoulders toward center of body mass. At close ranges it becomes almost an instinctive shot. Soft points simply are not designed to reliably do that job with enough certain penetration- especially in marginal "stoppers that aren't" like a 9.3 or 375.

Also what impressed me about the two with rifles in the video was that the PH was not barking and yelling orders that some do when stressed like, "no!, shoot!, don't shoot!, wait!, shoot!, no!, now!, no!, shoot shoot shoot now!" .... and so on. Those in the video were very cool under stress! That buffalo had every intention of killing whomever was in the way.

Again, my choice it that situation..
. 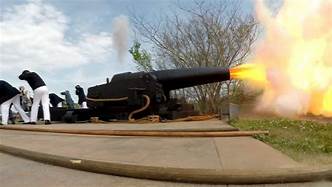 Wow. Great video.
My .375 H&H will hold one in the chamber and 3 in the magazine.
I'm hoping it will be enough if my day comes as Buffalo is on my bucket list.

Calm under pressure or at least holding it together well.
Bowhunter addict

A dangerous charge from Africa's Black Death, the African Buffalo
Click to expand...