We have two new reports from Burkina Faso this month from subscribers James Ledgerwood and Dennis Slater. Slater's report is the first we have received on a hunt in Burkina Faso operated by South African safari outfit Spear Safaris, and it also covers a newly reopened hunting concession, Pama Centre Nord. Both Slater and Ledgerwood were in country during the January 15 terrorist attack on the Hotel Splendid in Ouagadougou, which left 28 dead, including a number of foreign nationals.

As subscribers know, we have been following the security situation in Burkina Faso since the military coup in September, and have issued several updates from our corporate affiliate Ripcord (see Articles 3640, 3656, 3686, and the latest Ripcord Security Assessment in our February issue). The country's political situation has stabilized following the November election of President Roch Marc Christian Kaboré, but concerns over terrorist activity remain. Al-Qaeda in the Islamic Maghreb (AQIM) claimed responsibility for the January attack, which followed on a November attack in Mali. The curfew put in place following the AQIM attack was lifted on January 28, although the area around the Hotel Splendid is still restricted and the US Embassy continues to advise caution to foreign travelers in Burkina Faso (see http://ouagadougou.usembassy.gov/curfewlifted.html).

Despite the terrorist attack, both Slater and Ledgerwood say that they felt safe on their trips and that their safari operators prioritized security during travel through Ouagadougou.


"I was able to take excellent game on this trip, including a monster hartebeest and bushbuck. It's possible and likely that hunters in this area will be able to get excellent specimens of the major West African game animals.

"The concession was newly reopened, and I had the luck of being the first hunter to go in recently. PH Ernest Dyason is a real pro, and he took away any uncertainty about trophy selection."

Slater provided us with more details on his hunt in a follow-up email. He writes,

"Before traveling to Burkina Faso I read everything that The Hunting Report had on file, as well as the updates from Ripcord. While there were concerns, I decided to go anyway and I am very glad that I did. Following our arrival, I stayed in a comfortable, nondescript hotel in Ouagadougou a couple miles from where the terrorist attack occurred. We left town for the hunting concession the morning of the terror attack and were 100 miles away at the time, driving towards the southeast of Burkina Faso. There were no significant safety issues on the trip, other than the bad roads and grossly overloaded traffic. We encountered periodic roadblocks set by both the military and the local police, which we got through smoothly, as we had a very good local expeditor/translator with us. The soldiers and police were happy to see an American in their country.

"The concession we hunted, Pama Centre Nord, lies to the west of Arly National Park near the Benin border. We stayed at a camp (more of a mansion) 20 minutes from the concession, which was formerly a presidential retreat. The place was perfectly comfortable, although it had been mostly out of service for some time and needs some more maintenance and cleaning. The room had all of the necessities, including A/C, quality water and a working shower. The camp was scheduled for renovation after my departure.

"Ernest Dyason, operator of Spear Safaris in South Africa, planned this hunt and accompanied me as my PH. He had the inside track on hunting this concession, which is just now being reopened after years of being reserved for the former president, his cronies, and foreign politicians. The new government seems to be sincerely interested in increasing the number of American hunters coming to their country. We had all manner of officials visit us to express their appreciation for our presence.

"The number and quality of the game was exceptional. In addition to the animals I harvested, I also passed on plentiful oribi and duiker. There were lots of lions in the area. We saw tracks and heard them roar, but never spotted any. At one point a male leopard walked by us at 50 yards without seeing us sitting under a tree resting and watching him an hour before dark. I've been on two unsuccessful leopard hunts and this was an amazing experience. Dyason also arranged for us to hunt kob on a neighboring concession, and I found a very good specimen.

"I highly recommend this hunt. The area is a jewel for safari hunting, and will remain so if it continues to be controlled with limited access. An experienced PH like Dyason is indispensable in Burkina. He held back the local PH and trackers, who were pushing hard for shots on average animals."

We also heard from Ernest Dyason via email for more details on this safari.

"To arrange this hunt I teamed up with a local from the Ivory Coast who has many contacts in Burkina. The hunt area lies within the Pama Reserve about 4.5 hours east of Ouagadougou. It consists of about 85,000 hectares, formerly known as Presidential Park. The camp there is a bit run down, but we are currently in the process of revitalizing it. Having A/C is a real boon in Burkina, particularly in the warmer months after March.

"This was an exploratory safari of sorts. We saw all animals that were on quota, as well as elephant, leopard, cheetah and caracal. There were abundant buffalo, with herds of over 100 head. The hunting area is well-managed, with lots of waterholes and wells, and the game scouts follow the rules to the letter. My West African partner and I are awaiting an official letter of invite from the wildlife authorities to operate in this area.


"The local staff are friendly and pleasant, but very pushy with inferior trophy selection. This is quite common in Burkina, and I plan to accompany hunters personally or send one of my PHs from Spear Safaris for all future hunts in Burkina. Another fact that Americans may find irritating is that there is cell coverage almost everywhere, and the locals are constantly on their phones. It has its benefits for communication, though.

"I found the country to be very safe and friendly. I felt more at ease there than I do in Tanzania, even after the attack in Ouagadougou. Personally I believe it to have been an isolated incident, but I avoid any tourist places such as popular tourist hotels or any gatherings of Europeans where AQIM might attack. The smaller and less popular hotels are more than comfortable enough. We spent some time in Ouagadougou at the end of the trip, although this was not necessary."

Dyason says Hunting Report subscribers are welcome to contact him with questions about the Pama Centre Nord concession or travel in Burkina.

Thanks for the hunt report, I hope this opens more hunts to the area. I really would like to go one day, some year to this area and get a roan and the plains game at least....maybe a savanna buffalo. I like the look of the one above in the hunt report.

enysse said:
Thanks for the hunt report, I hope this opens more hunts to the area. I really would like to go one day, some year to this area and get a roan and the plains game at least....maybe a savanna buffalo. I like the look of the one above in the hunt report.
Click to expand...

I have been saying that for a long time Ernest, I just want to go will someone who is honest and speaks English. I don't want to be second guessing what my guide is saying during the hunt. I don't speak French, my old roommate in college did back in the day but I don't.

Enysse you can always get one of those translation apps for your phone.
L

Spear Safaris said:
Burkina is truly a great and different place to hunt, it is also a lot more affordable to hunt than most people believe.
Click to expand...

enysse said:
I have been saying that for a long time Ernest, I just want to go will someone who is honest and speaks English. I don't want to be second guessing what my guide is saying during the hunt. I don't speak French, my old roommate in college did back in the day but I don't.
Click to expand...

This is a all inclusive price, All licenses, trophy fees, 1st Gun, alcoholic drinks etc. You just take care of the tips if you please.
Click to expand...

Thanks for the post and price example, I like some others here would certainly love to go to that part of Africa someday!
John 3:16
N

I just loved that Bushbuck.John

CAustin said:
Enysse you can always get one of those translation apps for your phone.
Click to expand...

i wouldnt even know how to use one of these new phones today.im still dialing,cant teach an old dog new tricks.

Spear Safaris said:
Remember that I will be your guide / Ph, My partner there will also be with us and he is Fluent in the local French. It may cost you slightly more to do the hunt with me, not sure by how much as I have not really compared with the competition, I have to cover my own travel expenses, but I assure you that I will give you 5 star treatment and will do my utmost best to get you the best possible trophy's. If you are ready we can even do it this year, if not I am taking a few hunters again next January if you want to try a back to back with one of them.
Click to expand...

edward said:
i wouldnt even know how to use one of these new phones today.im still dialing,cant teach an old dog new tricks.
Click to expand...

If you want to pay to take me along I will work the smart phone for you!!!!

Matt Perchick said:
If you want to pay to take me along I will work the smart phone for you!!!!
Click to expand...

Ed, I have personally no experience with Handguns in Burkina but I am assured that is is no problem.

Below is a Burkina Transporter, these are all live goats. 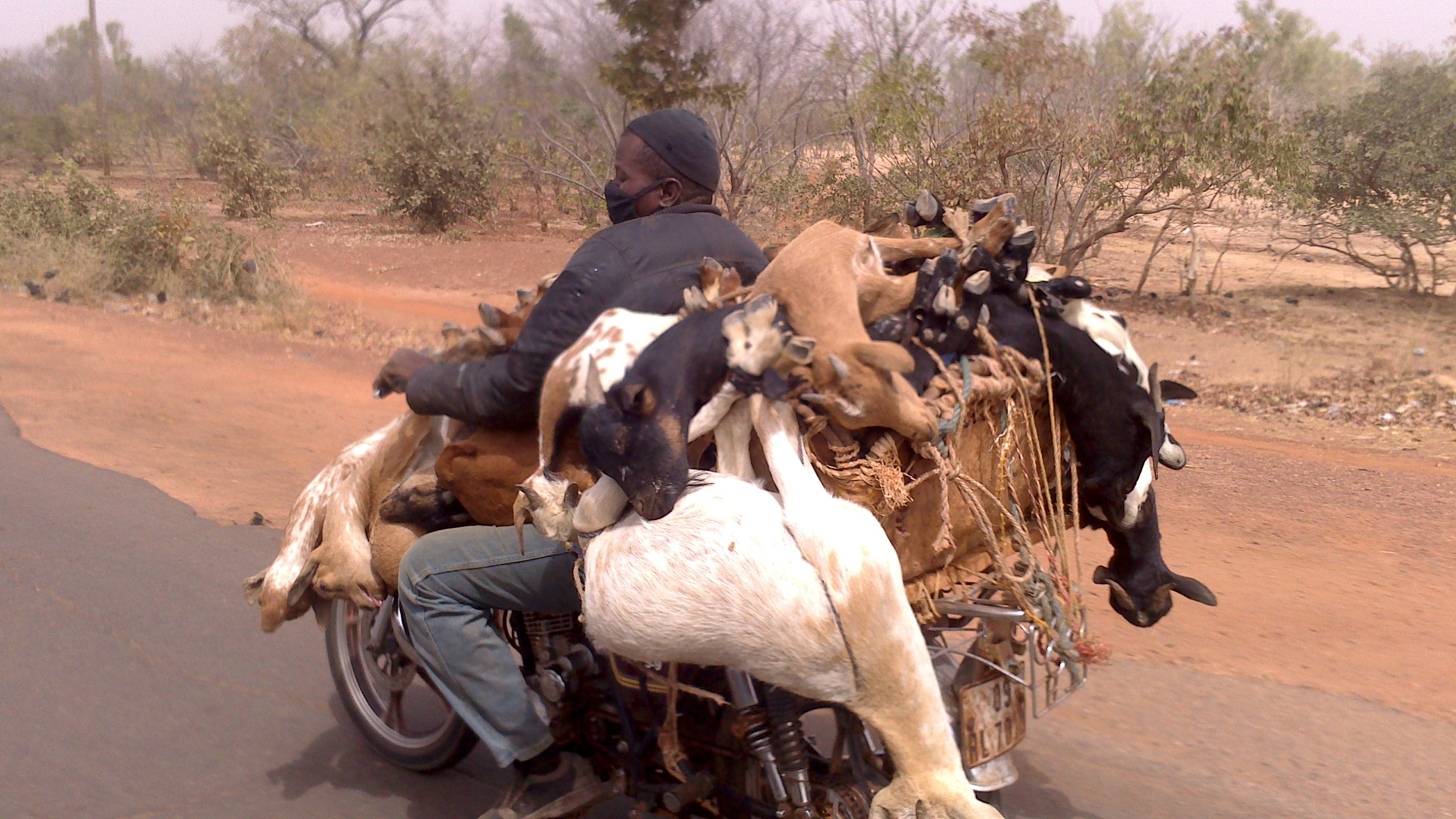 if thats for real,amazing.would that be our mode of travel?