Dear All
In March of 2015 I conducted a Safari for some of the small cats. This was a great Challenge and took us to places, that we may generally not visit.

Well I conducted another one of those in June of 2015 with some stunning results.

Dick Lane and I have hunted together 6 or 7 times in South Africa, Zimbabwe, Mozambique and Benin. We will probably hunt 6 or 7 times more as we just hit it off.

Dick wanted some of the small cats as they had evaded him for many years. I put it together and off we went to start in Mpumalanga South Africa. Our quest here was for Serval and Caracal.

Day 1 started at around 4:45 with us heading towards where we would meet our houndsmen, and likely areas for Serval. The day started slow and Cold, we broke open our Breakfast box for some coffee, when a call came from one of the teams to say that they had a mature Serval in a tree.

Off we took and there was a beautiful sight, the Serval treed about 8 feet above ground.
Dick took the shot and down came his cat, the Hounds chased it down into the river where we recovered it. 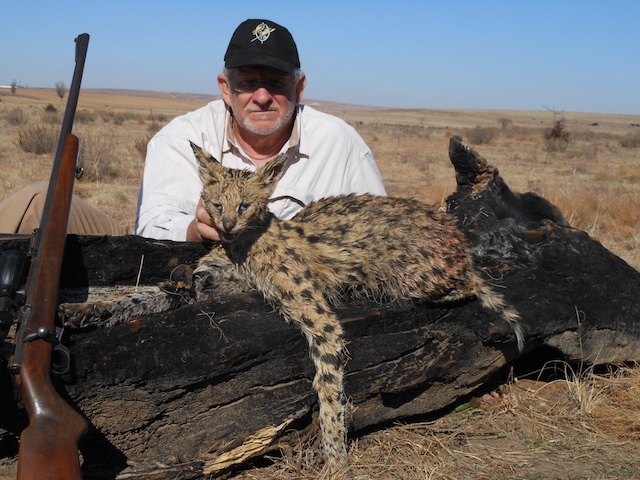 The rest of the Day was spent resting and or sleeping. I did not take my skinners so I did the Full mount skinning, while Dick got some rest.

Day two got us up early again and in the opposite direction for Caracal. Again it was bitterly cold and the welcome cup of coffee at sunrise.
About 30 minutes after sunrise the hounds had another Serval in a tree, but they just left him there. This one was a very nice male.

The second pack was on another track that looked promising but they just could not sort it out.
At one time, one of the farmers came to us to tell us that there was a Caracal in the tree close to where they were working on a pump.

You can imagine our excitement just to face disappointment, when we got there, to find the Serval they had treed earlier still in the tree. Anyway I got some nice pictures. 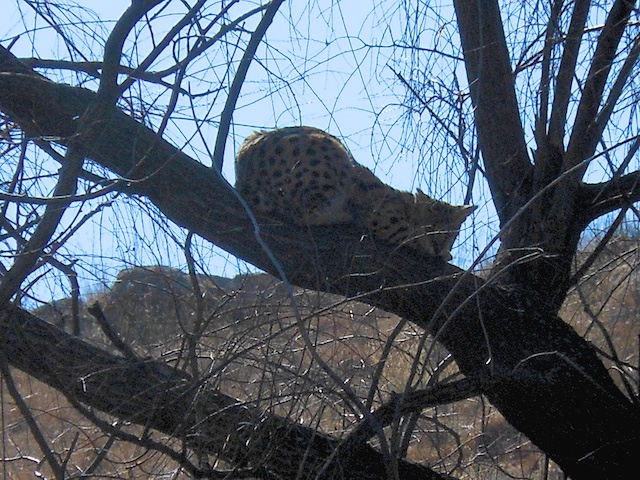 We gave up the chase and headed back to camp at around 1pm.

Day 3 and the same routine. Coffee at sunrise but this time the handlers called us to a spot quite far from where we were, it took me a good 45 minutes to reach them. The sight was electric, hounds were howling and running in all directions.

Dick made the shot and once again the Cat jumped, and was chased straight into the water by the hounds. We were ecstatic to find the Large male Caracal.
As I was the skinner again, we raced back to camp for me to skin, so that we could leave the same day. 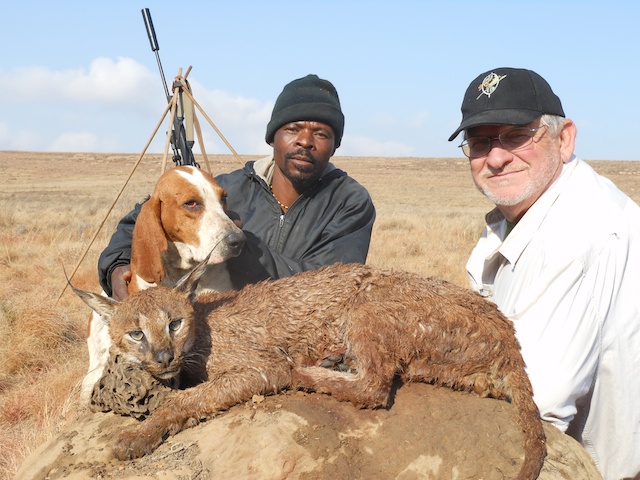 That evening we were at My Komati river area calling for Jackal but to no avail.
Day 4 we drove to the Kruger area.
As we were a little ahead of schedule we decided to just relax that first night and check my bait sites where I had some Side striped jackal feeding.


Day 5 was hyena Day. We got into position just before dark and 1 hour after dark Dick had his opportunity.
Unfortunately the shot went low and the Hyena was wounded, we followed Blood for 1,5 Hours in the dark to no avail and gave up the chase, for the next morning, which consequently produced nothing as well.
Unfortunately this can happen to anyone and we just have to deal with it. 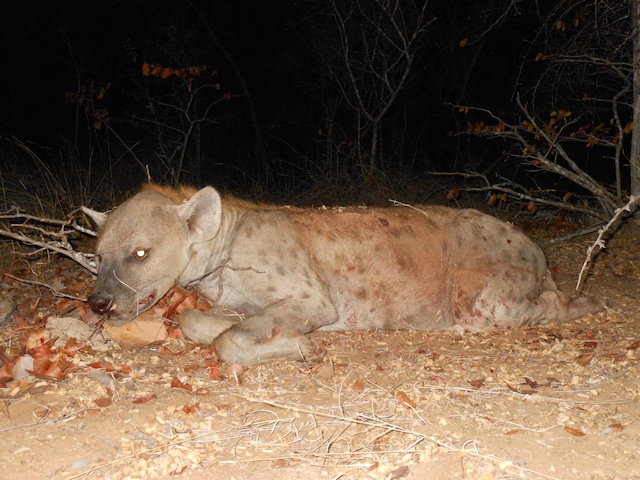 One of my Neighbors has a lot of Civet and they come to the back of his lodge, were they put out all the Kitchen scraps. I had an arrangement for us to try there and 6 pm we were in position. We were not even quiet yet, and a Civet appeared. Dick made sure of the shot this time and our quest was almost over. 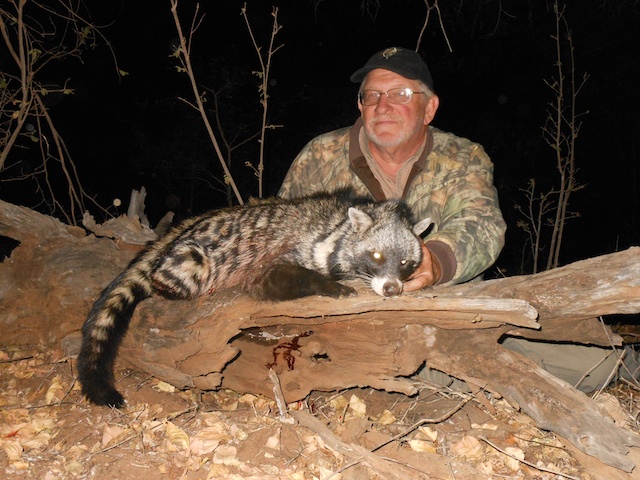 The rest of the time we tried to get one the cunning Side striped jackal, from my place, but they just vanished and totally outsmarted us.
Something for a next time.

Our days was spent at my Family camp on Thornybush just game viewing and relaxing, what a great end to our trip. 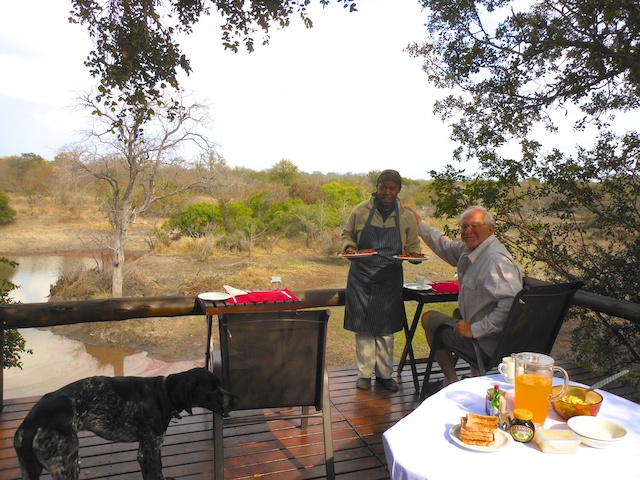 Dick and I are planning our next trip as we speak and it would probably be Burkina to collect some of the ones we failed on in Benin.

Congrats, that trip sounds like it was a blast.

Great fun Ernest! Thanks for sharing!

that would've been fun .....
congratulations to both ,you lads
THE HUNTER; The person that pays over 90% of the cost for the presavation and maintance of wildlife and gets zero credit for it ................

Different sort of a safari. Congrats on some nice trophies. Bruce

Have to love the breakfast view.

Good and bad luck and some good trophies. It sure sounds like there will be a next time.

That would be a fun hunt...

I'm confused on the Hyena though? It sounded from the story like it was lost, but there is a picture of a Hyena? Is that just a different hyena, or am I being dense somehow?
HUNTERS make importation bans work!
D

That had to be a very fun hunt.

BRICKBURN said:
Have to love the breakfast view.
Click to expand...

Me too and very impressed there is a jar of Marmite on the table!

Thank you for sharing, the small cats sound like a great hunt

Congratulations on the small cats! They really can be a challenge. Love any kind of hound story. Thanks for sharing! R.

Some day maybe ? We used to run hounds on coyotes around here .......love the sound of the chase !
Glen
GOOD LUCK AND PLAY SAFE !

Sounds like you had a great adventure. Good looking trophy's.

I'm curious about the hyena story also. Said it was lost but have a pic of a good one?

Sounds like a fun hunt Ernest. Thanks for the report and photos.
And here I am, returning to Africa of many faces;.... the sloe-eyed temptress with flowers in her hair who stole my youth and my heart, and left me an old man with a kaleidoscope of conflicting memories of many dashed hopes and some fulfilled dreams. E. Echols

P
SOUTH AFRICA: The Sheriff Is In Town