Language, music, and art often vary between adjacent groups of people, and help us identify not only ourselves but also others. And in recent years rich debates have emerged and spawned research into culture in non-human animals.

Scientists first observed chimpanzees using tools more than half a century ago. As this complex behaviour appeared to differ across different populations, researchers concluded that tool use in apes was socially learned and therefore a cultural behaviour.

This was the beginning of exploring what behaviours in other species might be considered cultural as well. Killer whale pods and dolphins exhibit different dialects and use tools differently, for instance. Scientists have mostly focused on primates, however. Capuchin monkeys of Central and South America exhibit 13 variants of social customs, to take one example, while different orangutan populations vary their callsand the use of tools, nests or other objects. But no species has garnered more discussion on the presence, importance, and evolution of culture than chimpanzees. 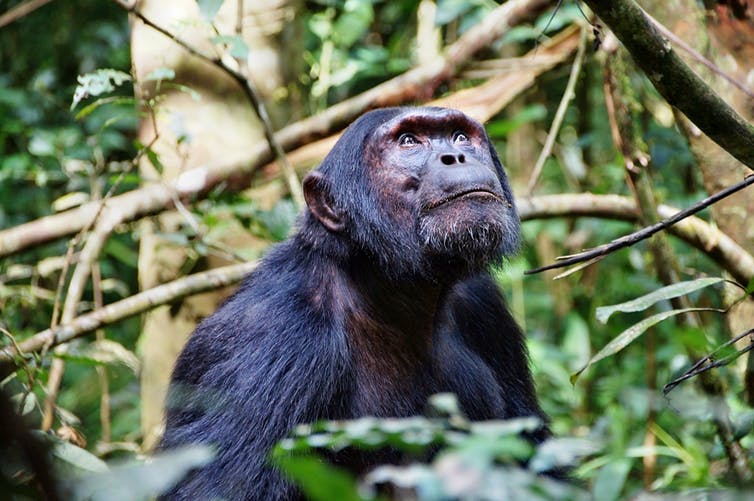 Chimpanzees differ in their grooming habits and the use of tools. Przemyslaw Skibinski / shutterstock
Examples of chimpanzee culture range from social customs, such as the way they grasp their hands during grooming, to how males sexually display, to the type of tools used for cracking nuts or ant-dipping. An early study argued that there are as many as 39 different behaviours that are candidates for cultural variation. This set off an eager debate about whether animals have culture or not and how we would be able to detect it.

As in humans, cultural behaviours in chimpanzees are likely critical for individuals to demonstrate community membership. If a young chimpanzee in the Tai forest in the Ivory Coast wants to signal to a peer that they would like to play around, then they build a small, rudimentary ground nest and sit in it. In most other chimpanzee groups, ground nests are mainly used for resting.

Living with humans
But chimpanzees now face the daunting task of surviving in a habitat increasingly infested and assaulted by humans. And as their populations decline, so does their behavioural variation. In short, humans are causing chimpanzee cultural collapse.

Two of us (Alexander and Fiona) were involved in a new study which integrated data from 144 chimpanzee communities across Africa, and found the more that humans had disturbed an area, the less behavioural variants are exhibited by nearby chimpanzees. The results are published in the journal Science.

The actual mechanism behind this is not entirely known. The most obvious explanation is that increased human disturbance means there are fewer chimpanzees overall. Even those that remain have to be more inconspicuous in order to survive in areas where their food and nesting sites are threatened by logging operations, their water sources are polluted by miners, and they risk being hunted for bushmeat by poachers brought into their forests by newly-built roads. 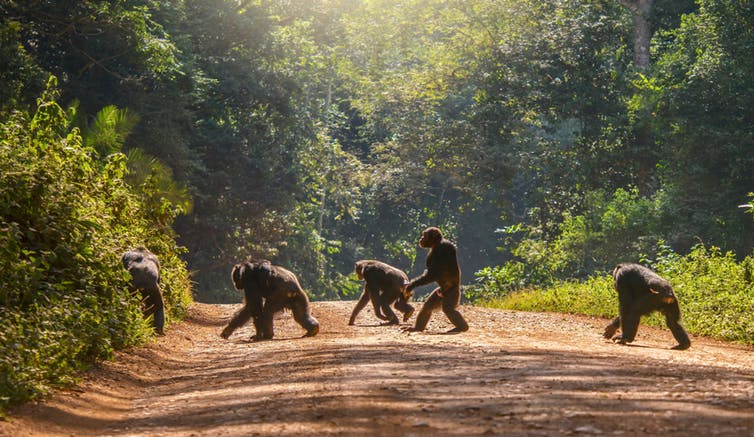 Chimpanzee habitat is being fragmented by roads. CherylRamalho / shutterstock
All this forces the chimpanzees to forage in smaller groups and use less long distance communication like pan hoots and drumming on tree trunks. This likely leads to a decrease in the spread of cultural behaviours, as associating in smaller group sizes lowers the chance of learning socially from one another.

Chimpanzees have also been observed to adapt to human disturbance by inventing new coping mechanisms such as eating human crops. But despite these rare adaptations, overall human activity is vastly erasing the rich behavioural diversity that now characterises chimpanzees.

Chimpanzee monoculture
But, if the species is gradually merging into a single cultural entity that stretches all the way from Senegal to Tanzania – why does this matter? After all, monocultural species are not inherently problematic. There is no direct relationship between cultural diversity and species distribution, for example. Flies, rats and crocodiles are all disseminated across a vast area, and yet have not yet been described as cultural. Losing chimpanzee behavioural diversity doesn’t itself threaten the species survival.

Losing diversity could be representative of larger issues, however, not least that the species is on the decline, which is the worst scenario. For example, we don’t yet know how adaptive these behaviours are. A loss of behavioural diversity could represent compromises in how animals respond to selection pressures like changes in food availability and how they adapt to climate change.

The risk is that we humans are irreversibly endangering a unique chance to discover the full extent of cultural diversity in our closest living relatives. When scientists discover a new group of wild chimpanzees it often exhibits unique behaviours that have never been observed previously, and it is hard to know what would be eradicated before we know about it.

If things continue as they are, the opportunity to study common evolutionary roots with our own species might soon be forever lost. Making protection of cultural diversity a conservation priority, which extend to numerous other species, would help to ensure the survival of our extraordinary primate heritage.

With a surging human population, and invasive species from China, the worst is yet to come for the chimps. And the Humans...........FWB
You must log in or register to reply here.

Humans Not Always To Blame For Genetic Diversity Loss In Wildlife

Stunning Discovery Shows Early Humans Were Hunting Rhinos In The Philippines Over 700,000 Years Ago

30 Litres Of Milk A Day, A Sheep As Companion And Humans As Caretakers

A Psychological Appreciation About Hunting