Guys and Girls I am just back from a hunting trip in Sweden with the outstanding L2G Experiences Team. We flew from Edinburgh to Oslo . Under £50 each way. Picked up in Oslo is a suped up Volvo Should have taken 2 hours to get to the cabins in Sweden but there was a crash or two in Norway. So took 4 hours. After getting dropped of at the cabins to get shower and changed we went for a cracking meal. Mushroom soup, roe deer and baked cheese to finish. Off to the pub . This was the owner privite hunters pub. The local beer was superb. Then the shots (fireball) and the stories about hunting and life started flowing. Sore head the next day.

The 2nd day was learning how to ski . #sorearse . Was a good laugh. We also had a mess around on the 6x6 tracked bike good fun. After lunch we went to the range to get used to the rifles. 300 win mag Sauer 404 3006 308 All shooting target at 100m . Had moose for tea . First time ever. Super home made meal. Linda cooking was out of this world. We made a plan for the next day. 30mins later it got change as one of Lars (the main man) camera trap sent him a photo of a pack of 5 wolves came through the hunting ground. Also a picture of a lynx got sent for the gun range 100m from Lars house.

Up at 5am to get breakfast. Cold meat and cheese. Load the bike into the trailer and away for a 120k drive to one of the 50k hunting grounds. -25 in the car. At the hunting shelter we light a fire and made sure everyone knew where there stand was. The dog were not getting off the line because of the wolves. I was the last to get dropped off. I was allowed to shoot bull moose, cow moose and calf but the rule is the calf is to be on the floor first. And roe which I was not going to shoot. (Saw 50 odd roe in the 2 days hunting) I walked 50m up the hill and started scanning for a nice bit to sit and wait for the dogs to come through. Straight away I found a cow moose. I stalked back into the tree to cut the distance . At 130m I was happy with a tree as a lean . Just had to check for a calf. Then I found a bigger moose . Lifted its head it had antlers. Thought this was a safer option. Had to wait 10 mins until I could squeeze the 308 trigger off. He jump and ran for 20 m and stood. I ran to another tree to get a clear shot then he turned to run towards me and made 5 yards and his legs came up in the air. The cow moose ran out and stood perfect but I was not being greedy and let her be. I messaged Lars to come and see me . He had only dropped me off 20 mins and we had a moose down. Hugs and hand shakes and a spruce was giving to me. Took me 15 mins to graloch him. Then it was the tracked bike work time. Made it so easy dragging him out. No other moose were shot that day but lots of sign . Back to the hunters shelter for moose 2 hour time back to skin the moose out and cut a bit of damaged meat of on the ribs. Moose fillet for tea. Omg that is the stuff . Amazing day

Next day we placed everyone in there stand while I went for a look for a Capercaillie. Found 3 . Fecking missed a cock bird at 35 yards. Right over the top of him. Forgot to aim low. I was not in a good place. One of the dogs was barking hard at a moose and were moving closer to the other hunters . We watched all the action on itracker app on the phone. The boom as the 300 win let ring. The msg came through moose down. The other hunter drew had shot his moose. And the bike made short work on getting his animal out. The trip was amazing . L2g were brilliant. They could not do enough for us. The people the food the drink were out of this world. Lars the owner of L2G Experiences was the best host ever . What a knowledge this man has. I could not have sat in the stand or walked in that weather without my nomad jack and plus 4s I was so cozy in -25. But I wish I had better boots. My meindl were not up to the job and too noisy. I can recommend Lars and the L2G Experiences so much and I will be going back. I hope you enjoyed my write up and photos. 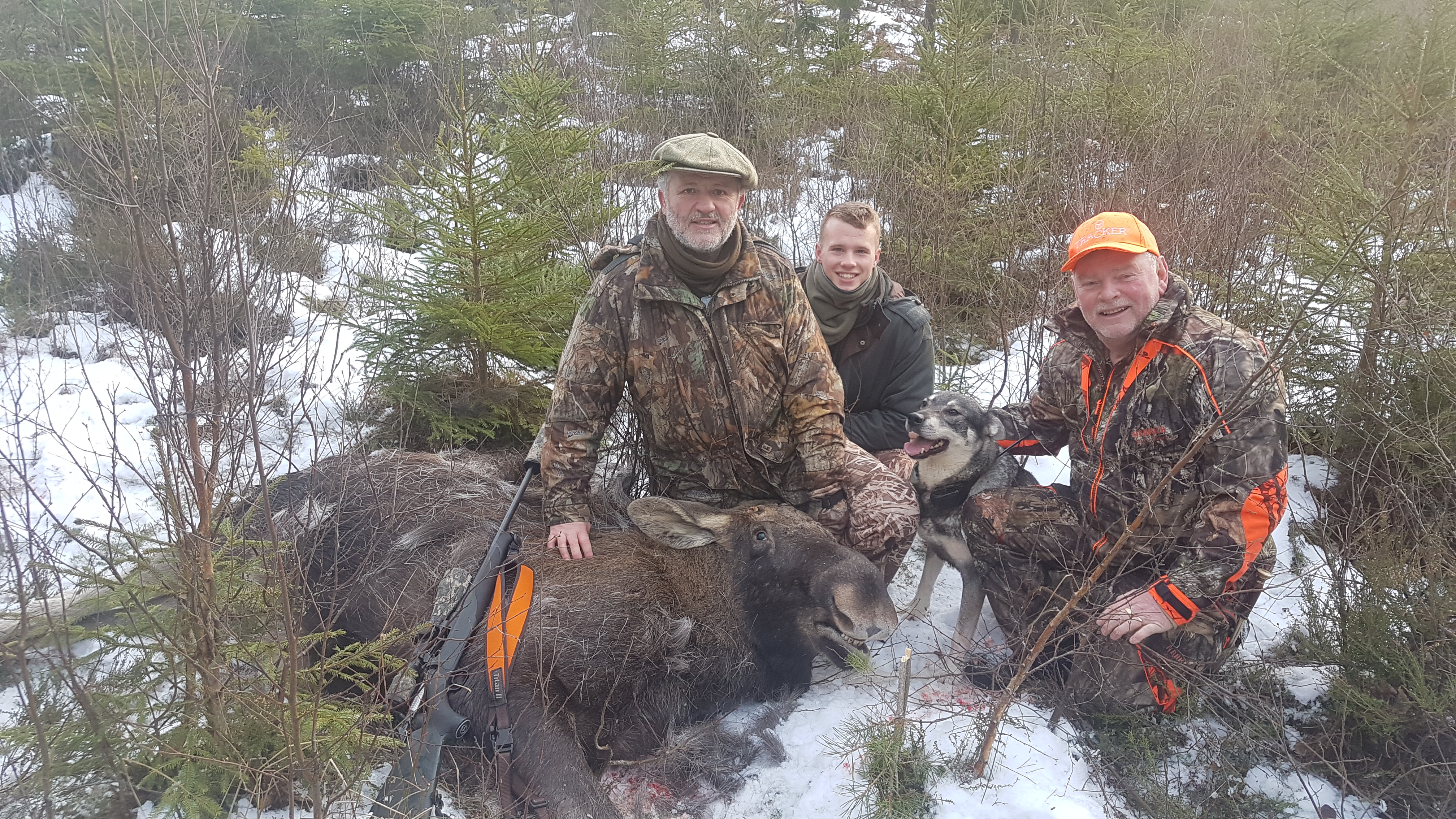 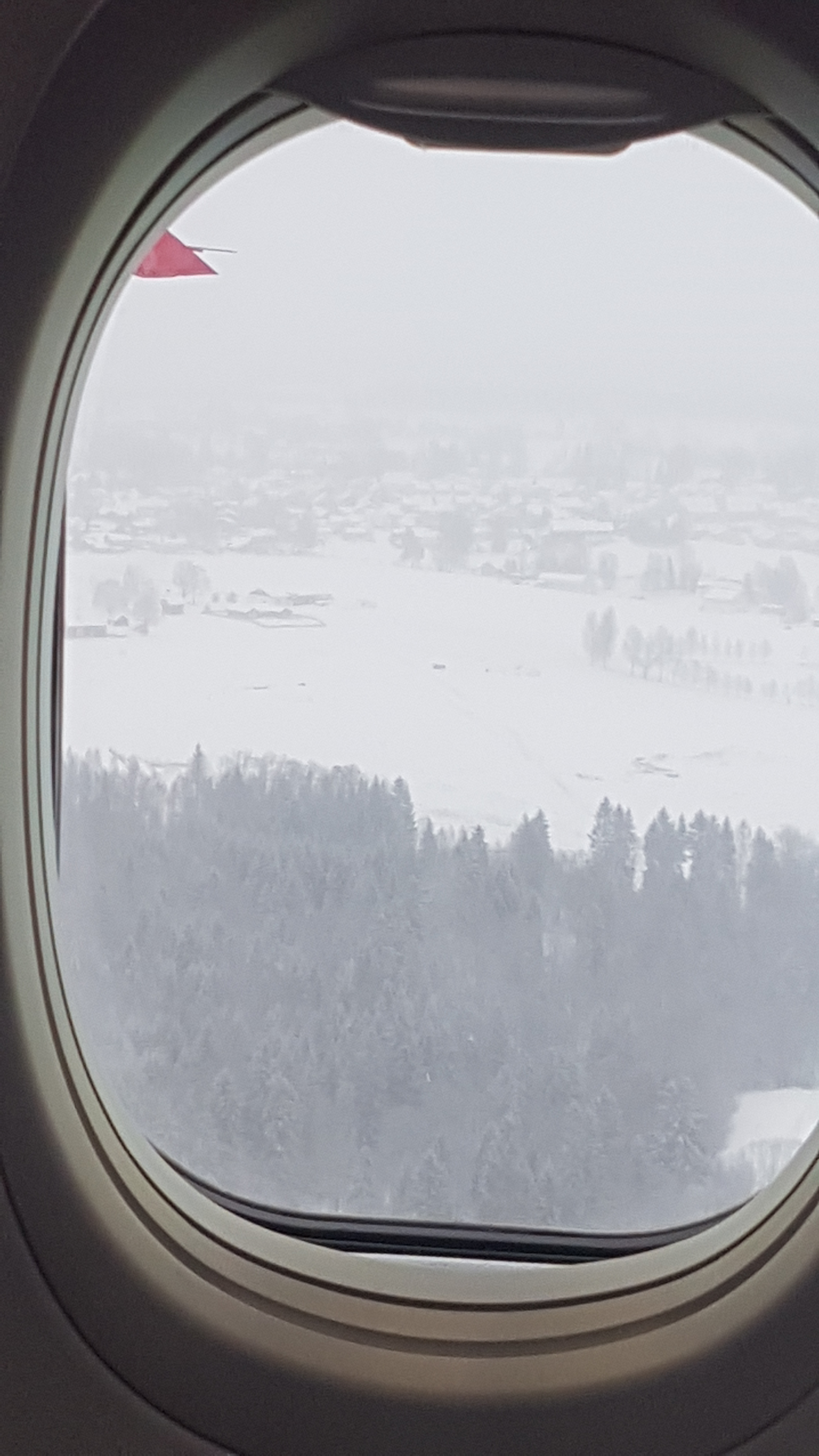 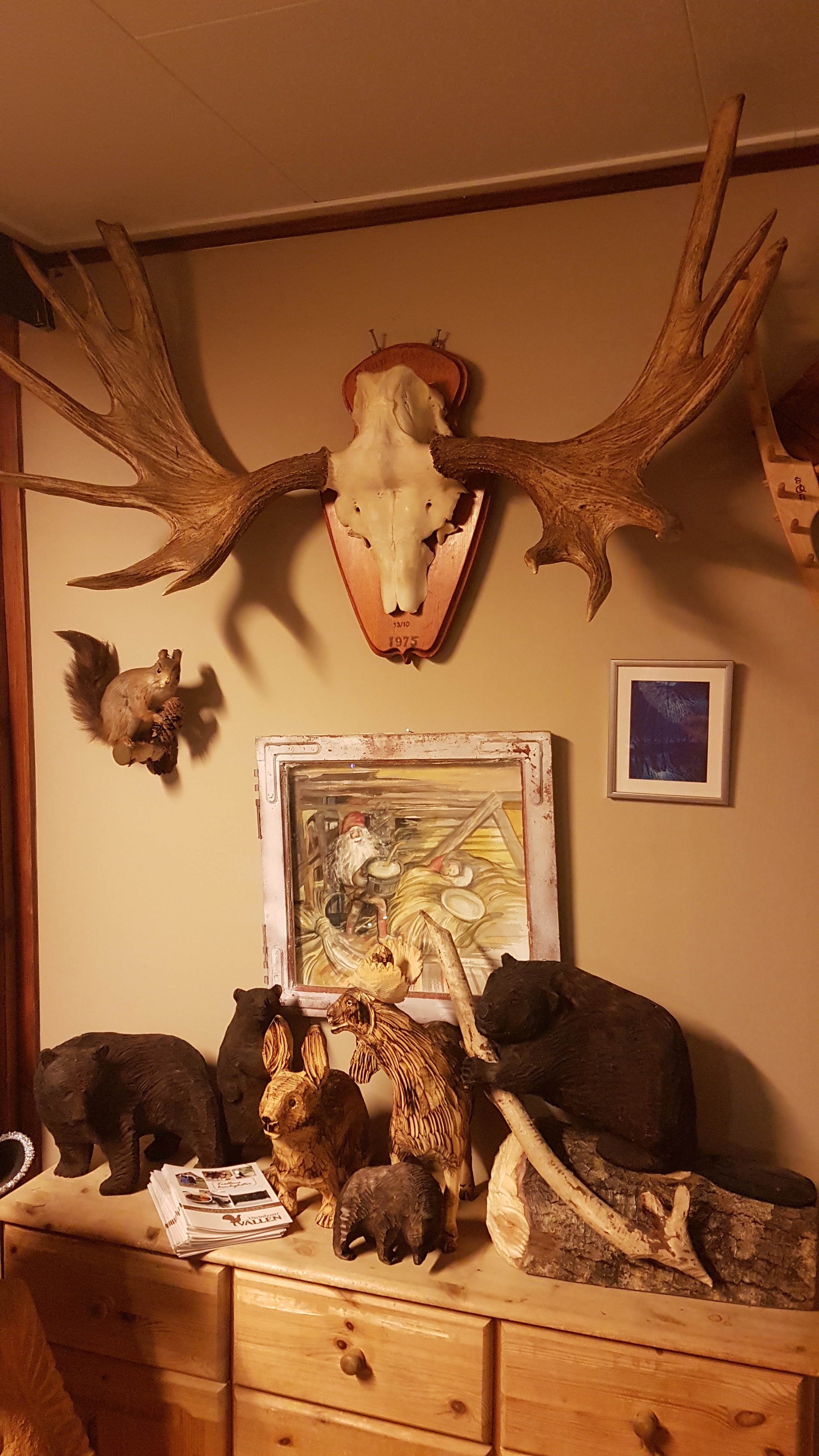 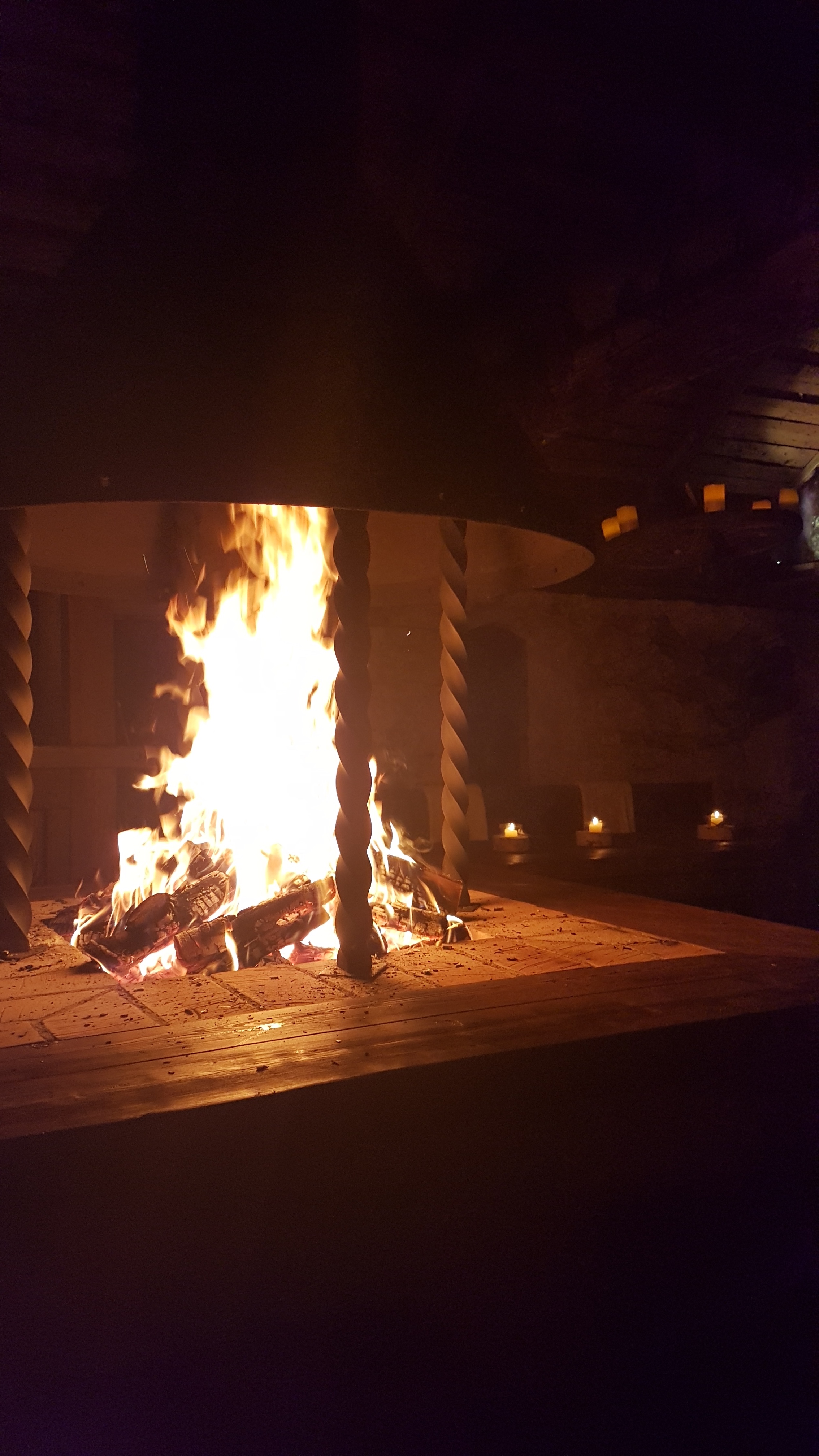 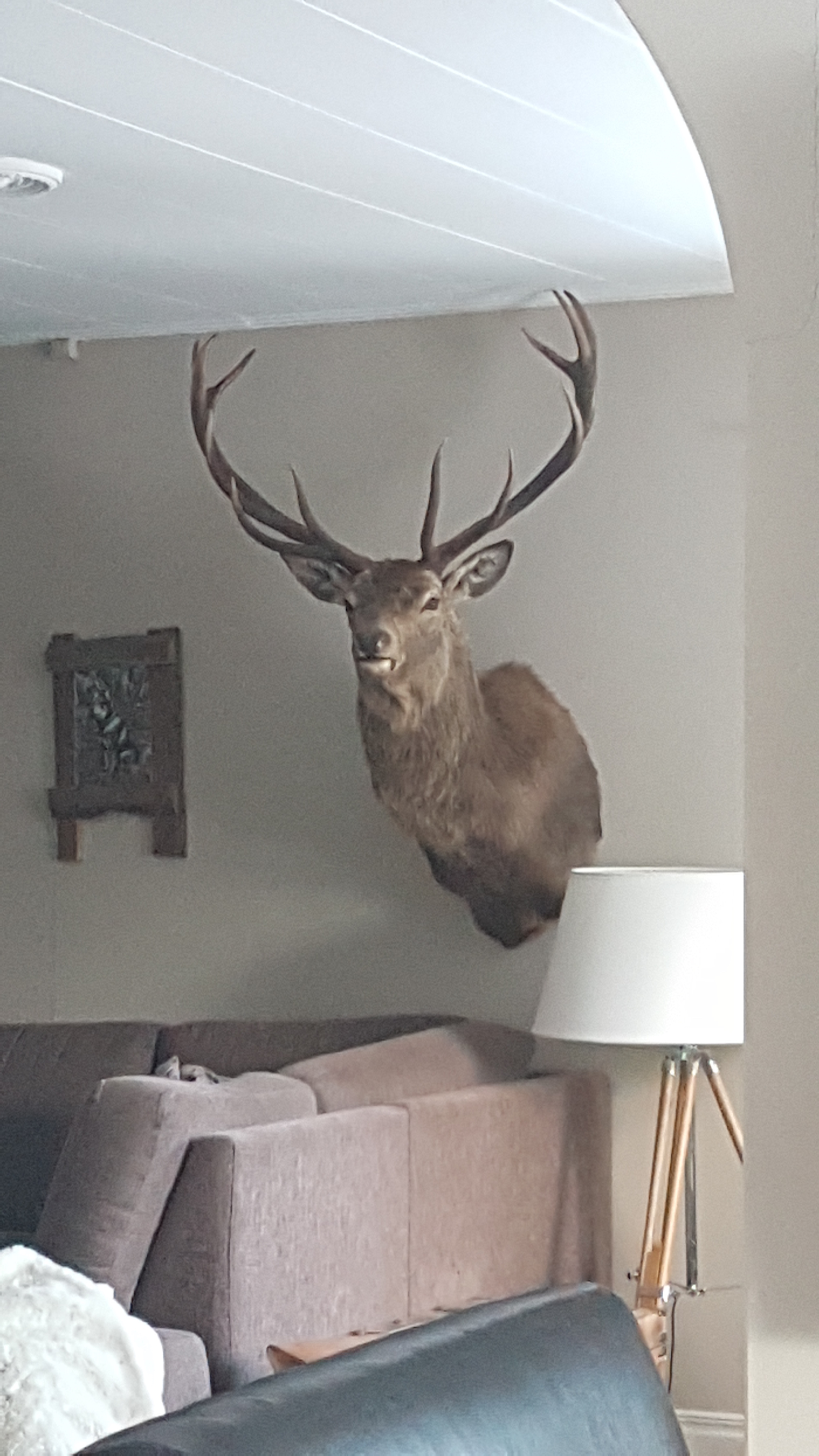 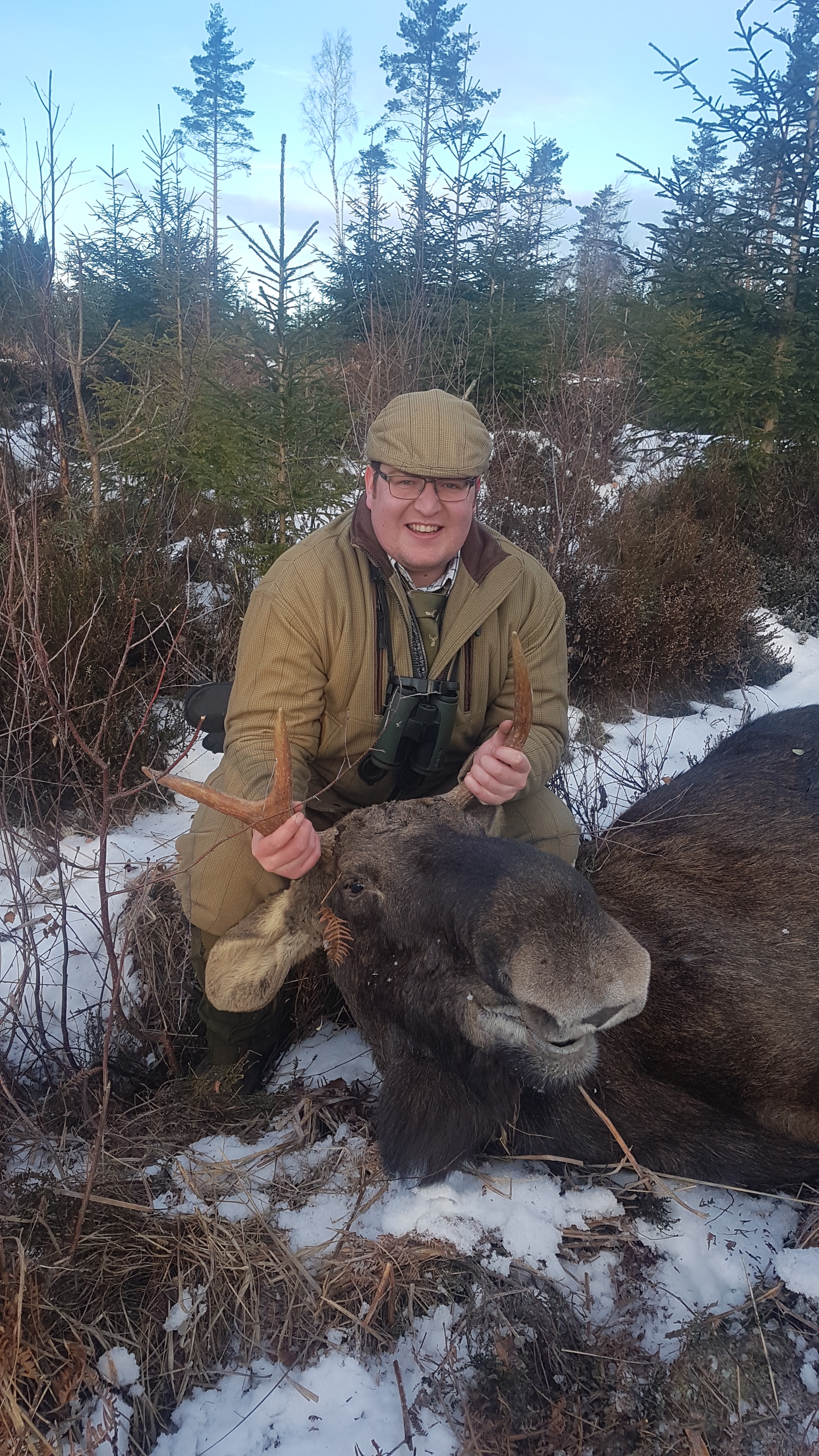 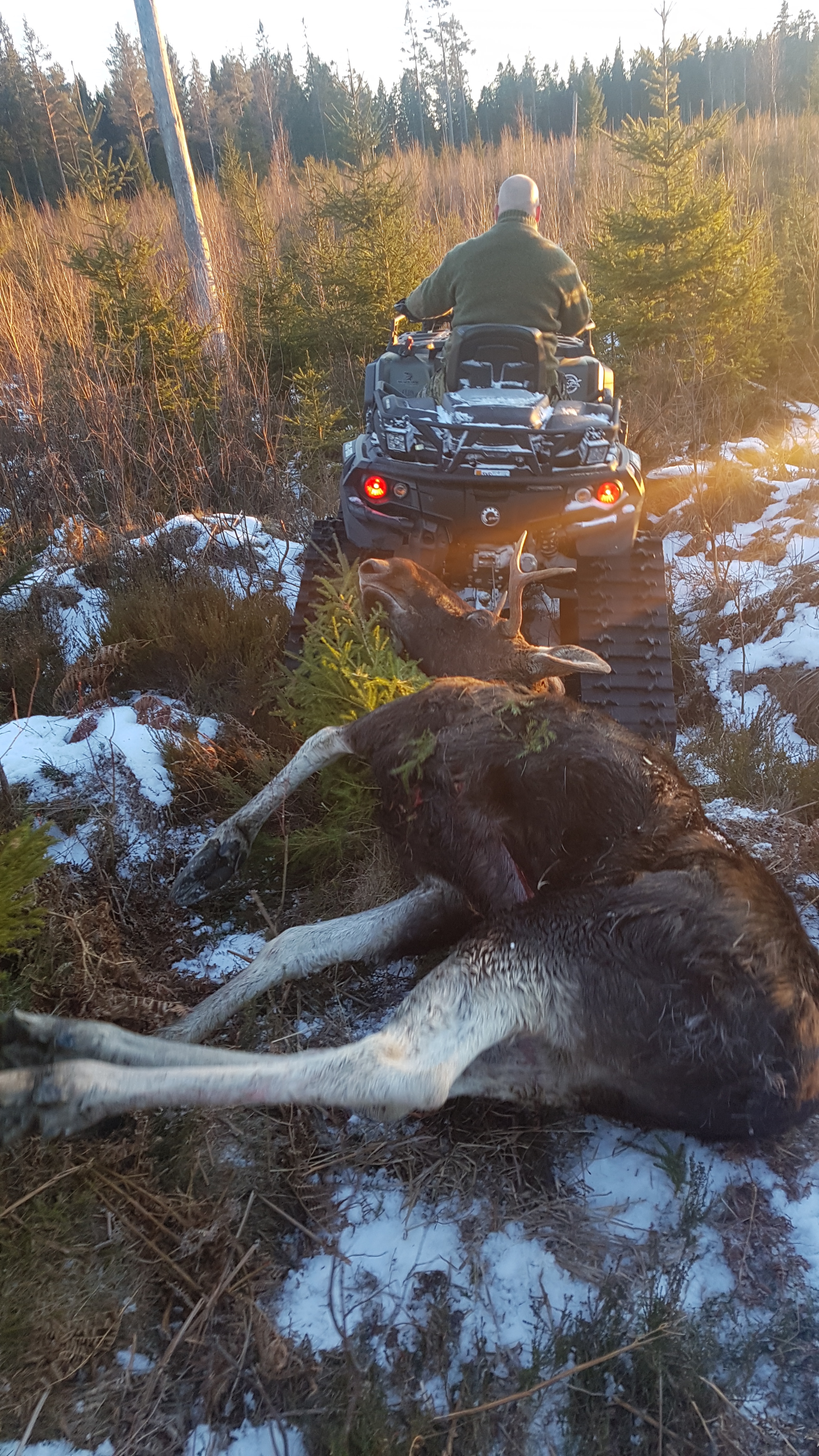 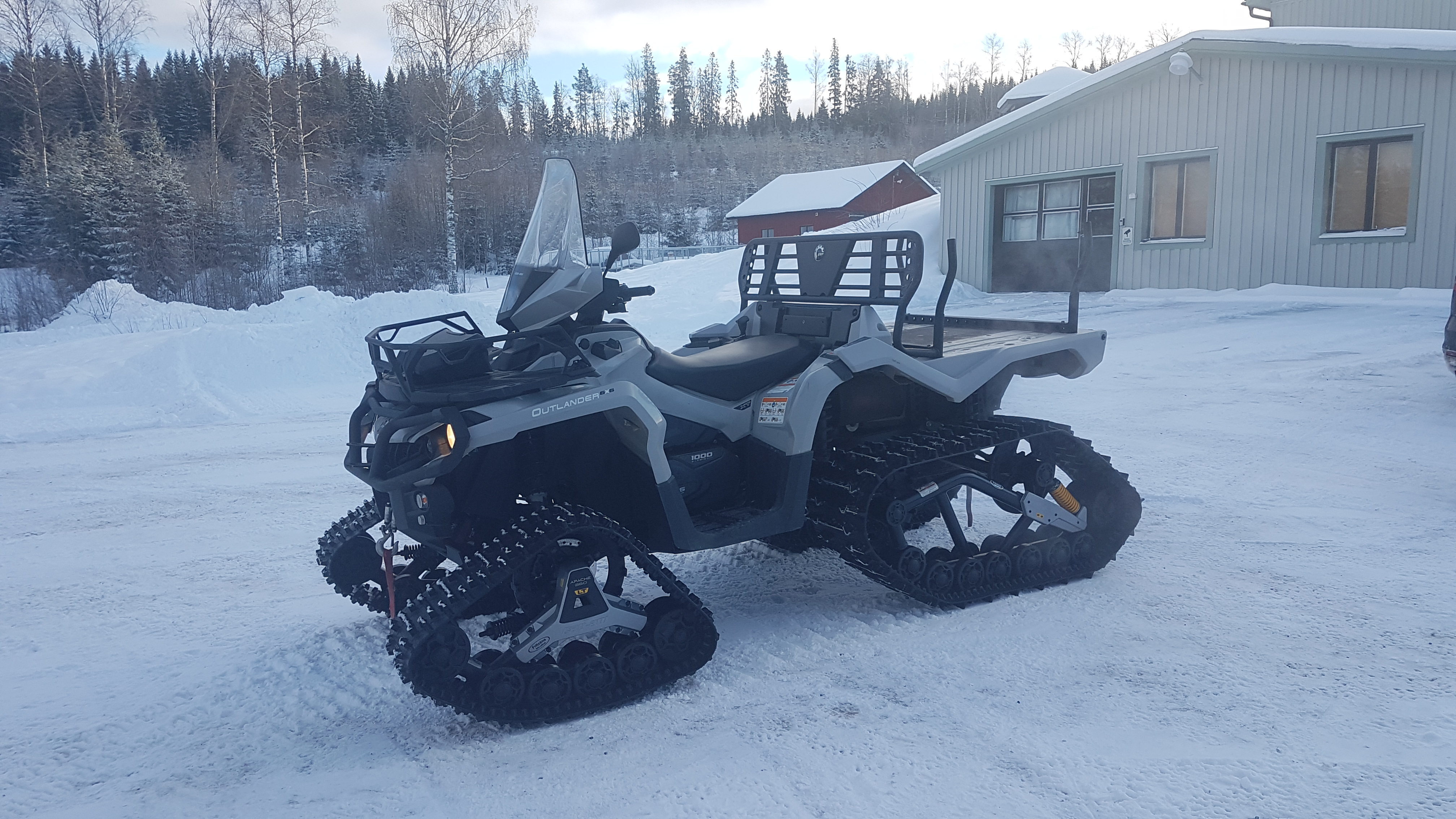 Congrats on your hunt!

Thanks for sharing your hunt.

Thanks! I love it when people write reports - and of course post photos.

Sounds like a good place for hunting. Usually, it takes quite a while of waiting to get a Moose. Perhaps the use of a good dog to find them helped a lot, but the guide must know well where the animals are going to go. In some parts, the dogs are used to stop the moose and hold its attention so that the hunter can get to a good position for a shot.

It makes perfect sense that you don't shoot a cow if there's a calf (or two or three) with it. Here in Finland, it is a big offense to kill a female animal that has young ones with it. I guess Sweden has the same thing.

In the photo, the moose is being dragged through the bushes. I just read a book on how to handle game animals after the kill, and one thing that the authors warned about was damaging the pelt while getting the animal out of the woods. Using a trailer, sleigh or even a big piece of canvas was recommended.

Was the Capercaillie in a tree or on the ground? At 35 meters/yards, you had a pretty steep upwards angle, if in a tree. Getting a capercaillie is a pretty big deal, as far as birds go. It is the biggest bird in the woods and just finding one isn't necessarily easy. They can get quite aggressive during the mating season. Like, attacking people who want to pass through their area.

You had a fun hunt, thanks for sharing. Approximately how much did your moose weigh?

Doing a moose hut is on my bucket list. Question for you, @Alan Rose : what constitutes a legal bull in Sweden? Many places that I've researched in Canada and the US have certain requirements, such as 50" or a certain number of tines. Your moose would appear to be very young.

Browsing the Swedish hunting legislation, I could not find a national rule for size. However, the law requires that a "Moose hunting area" must have a Moose hunting plan, approved at the County Administrative Board (Government agency). Those plans might have local rules about favoring certain sizes, or they might not.

Not quite sure about Sweden, but it seems to me that the traditional tendency in Scandinavia and Finland has NOT been to breed trophies. You hunt for meat, and you keep the Moose population from exploding. If you get a nice set of antlers, that is an extra bonus. A big chunk of meat and maybe a good pelt is what a local guy goes after, in addition to the actual hunt.

Congrats Alan, seems like you had a great time !

I hunted in Finland about 20 years ago, and as @perttime says, you are allowed to hunt a certain amount of animals and they specify numbers males and females.

The locals are certainly not interested in trophies, they hunt for meat.
B

375 Ruger Fan said:
Doing a moose hut is on my bucket list. Question for you, @Alan Rose : what constitutes a legal bull in Sweden? Many places that I've researched in Canada and the US have certain requirements, such as 50" or a certain number of tines. Your moose would appear to be very young.
Click to expand...

There are no such size requirements. Every, by the government specified, area hunts out of a quota given to them. The area normally then decides the age distribution of the bulls themselves. I think the rules can differ somewhat depending on where in the country you are, but these are the general principles. It should be noted that the goverment determines when in time you are allowed to hunt specific species. There is however a divide in the hunting community whether to allow winter hunts on moose due to the fact a fetus might a have been developed.
Last edited: Jan 22, 2019

If I'm reading the Swedish regulations correctly, the hunting period is determined by the relevant County Administration. National regulations set the earliest date for starting, like first Monday of September or second Monday of October, depending on area. Generally the Moose hunting period should last at least 70 days. It cannot continue after the last day of February.
http://www.riksdagen.se/sv/dokument...gssamling/jaktforordning-1987905_sfs-1987-905

In neighboring Finland, many hunters say that they do not want to start too early, for two reasons: they wait for the leaves to fall for better visibility, and prefer colder weather for more troublefree preservation of meat.

Is it legal to bring Scandinavian game meat back to the US?

The only two countries I know for certain that it's legal to bring back game meat are Canada and New Zealand.
"Only accurate rifles are interesting." -- Townsend Whelen

Shootist43 said:
You had a fun hunt, thanks for sharing. Approximately how much did your moose weigh?
Click to expand...

Thanks for sharing your report. Looks like you had a good time and returned with some tasty meat. Congrats
Bruce
You must log in or register to reply here.