Congrats on the hunt, thanks for sharing with us so far!
John 3:16

We continued to hunt plains game during the day. Of coarse, I wanted to go back to that special valley to look for that huge nyala again. Well be did go back and we found another very nice nyala. I was not sure how big he was but I got a shot within 75 yds between female nyala and took a shot. When we walked up to him he was 27 3/4 and 28 inches respectively. We were smarter this time and drove past immediately and stalked our way back to the nyala. I will be doing a wall mount, this one has a beautiful coat of hair on him. 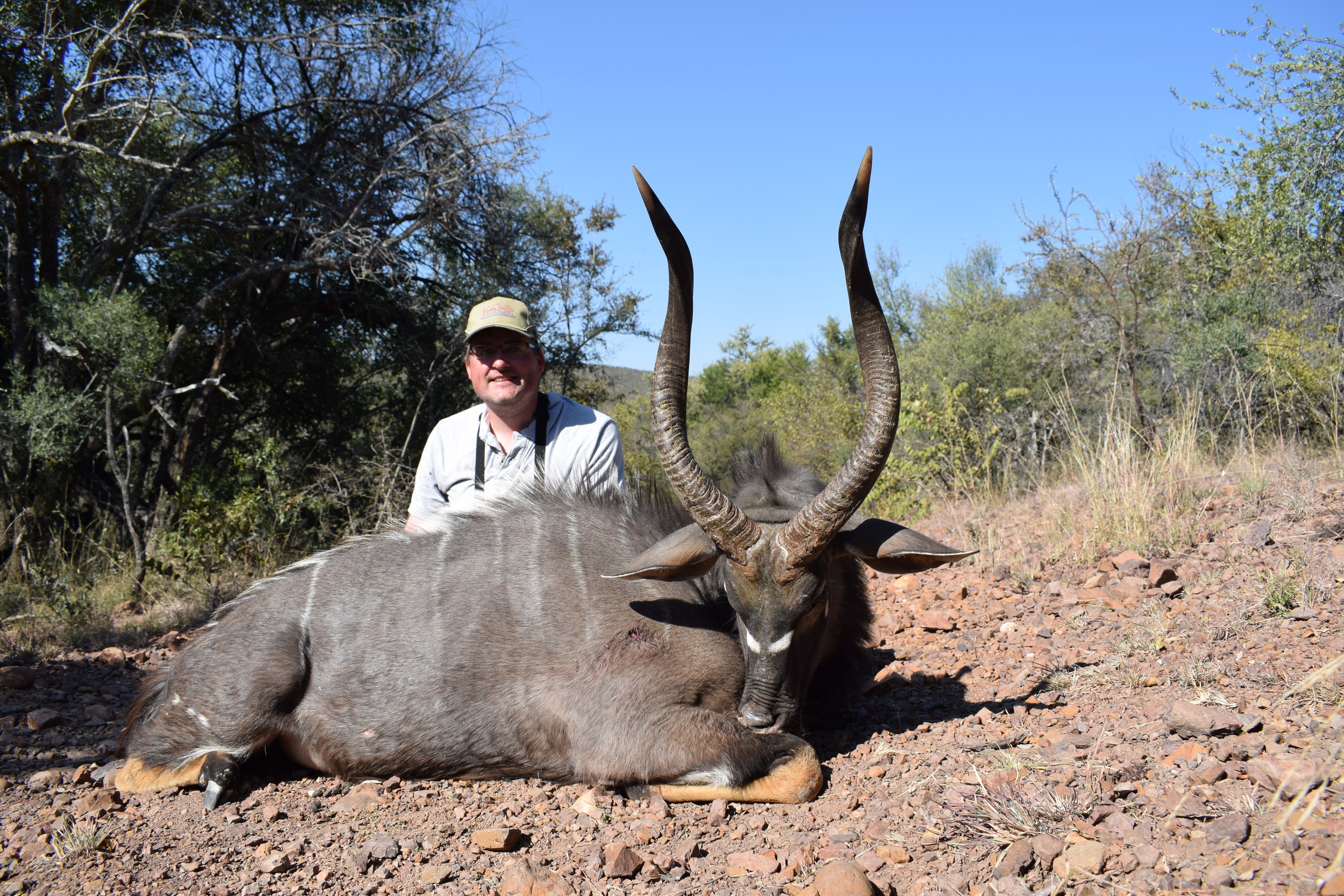 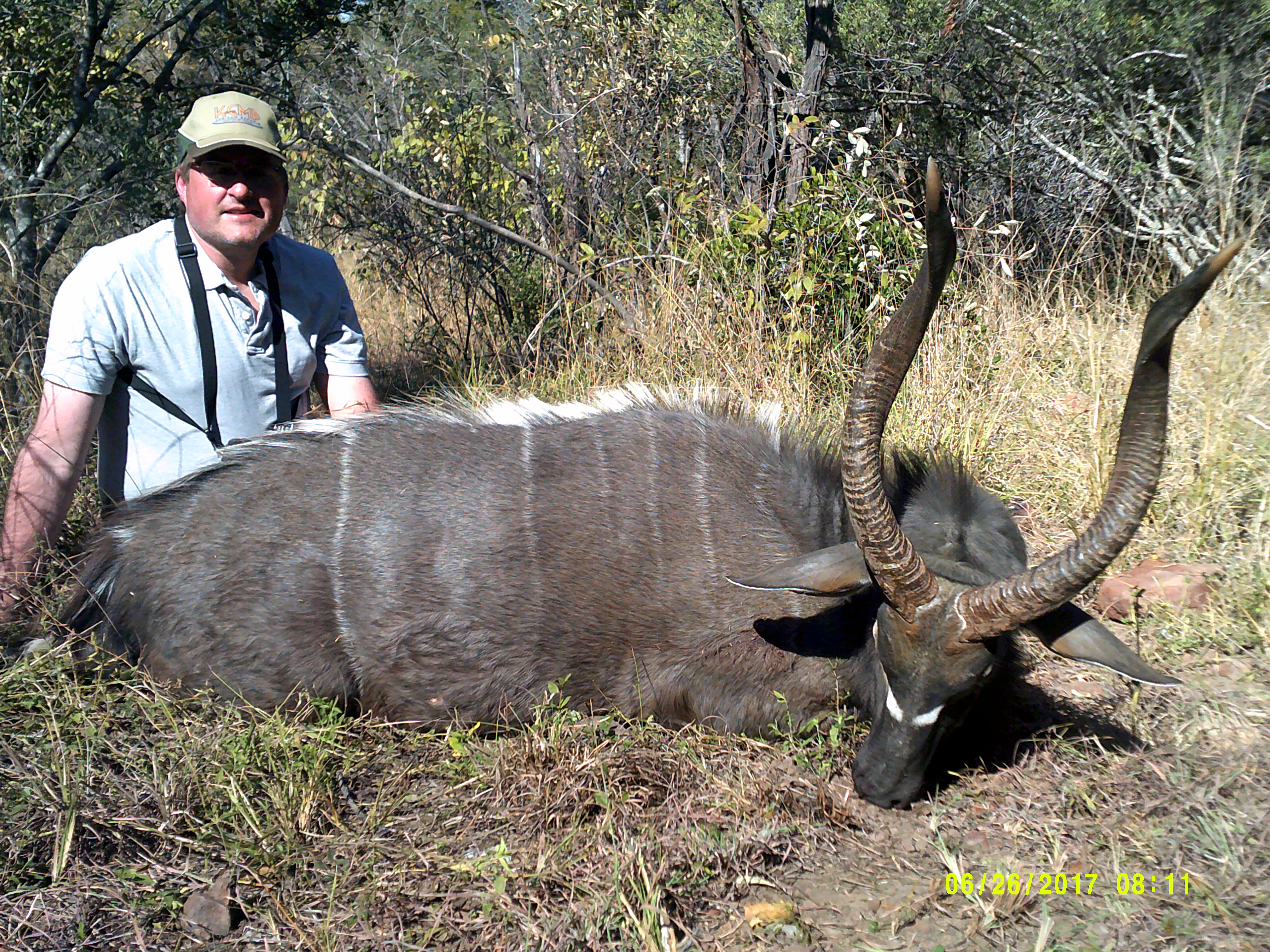 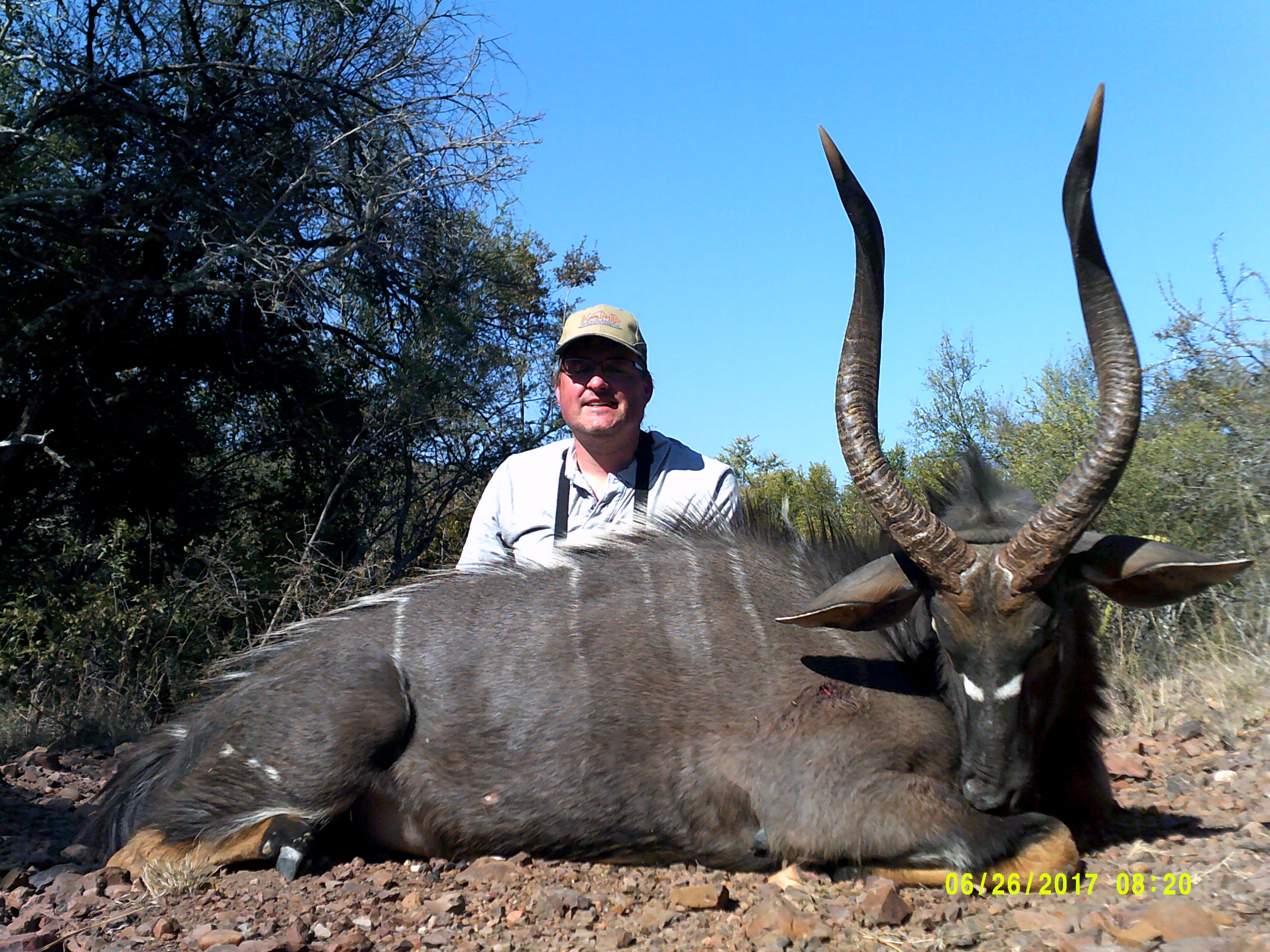 I am enjoying your report. I am glad you have made the time to share your hunt with us.
Not enough hunt reports this time of year.
Your Nyala is a beauty.

Beautiful Nyala. Do you think it was the same one you saw there before? Fully mature for sure. Congrats
Bruce

Great looking Nyala E. Congratulations!
And here I am, returning to Africa of many faces;.... the sloe-eyed temptress with flowers in her hair who stole my youth and my heart, and left me an old man with a kaleidoscope of conflicting memories of many dashed hopes and some fulfilled dreams. E. Echols

I had to go back to the beginning to refresh my memory on the background of this hunt. You got some cool critters...some of the cull animals look like trophy quality to my untrained eyes. Looks like a busy, but great hunt!
"I don't need to shoot farther...I need to hunt closer." - G. Sitton

Beautiful Nyala. Do you think it was the same one you saw there before? Fully mature for sure. Congrats
Bruce
Click to expand...

I'm going to try to post the video of both of nyala, her on AH. I may have to send it to Brickburn though, I did try posting it here unsuccessfully. I'll keep trying, I'm not sure what I'm doing wrong. It really is good footage considering not having a camera person. 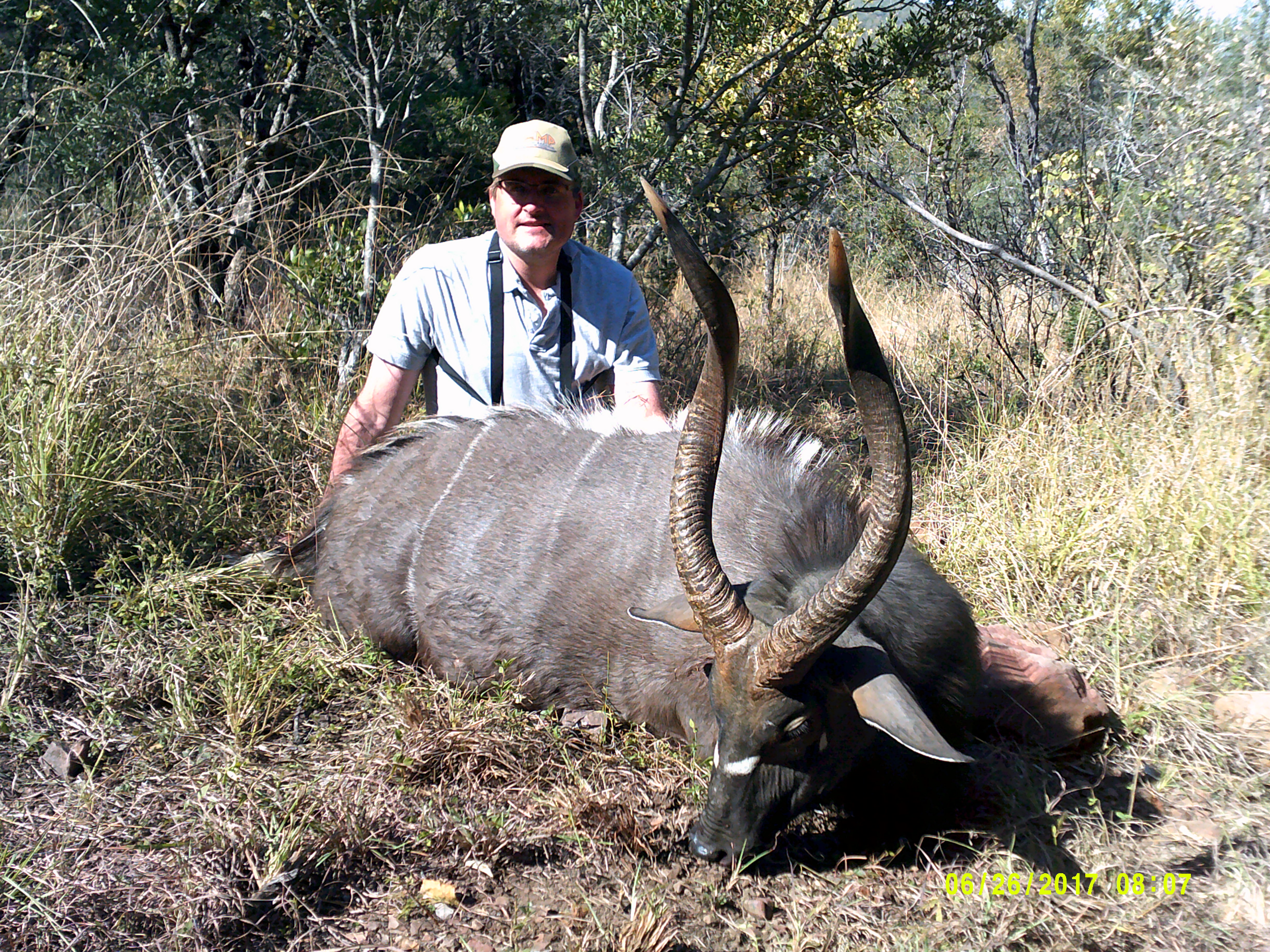 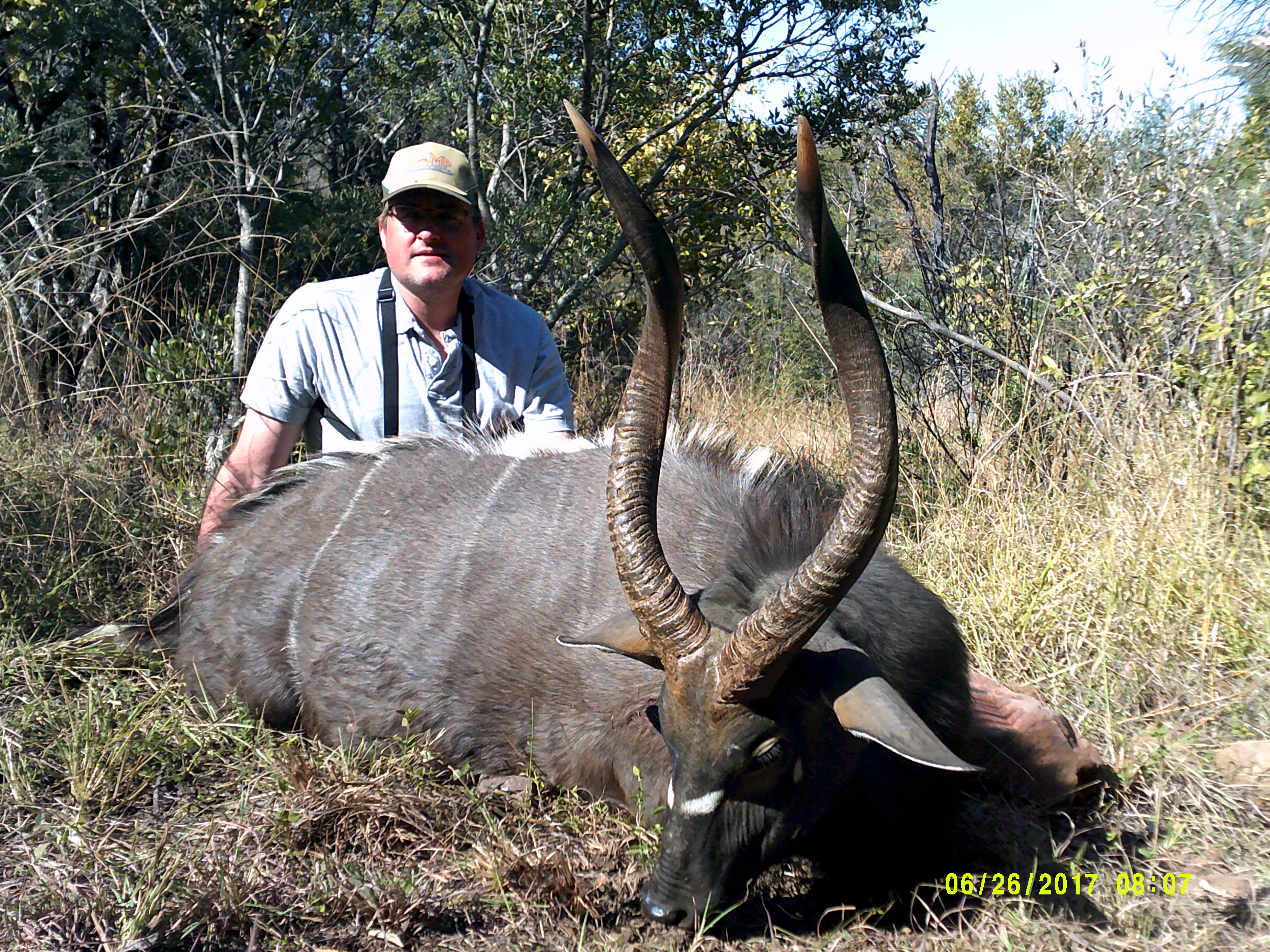 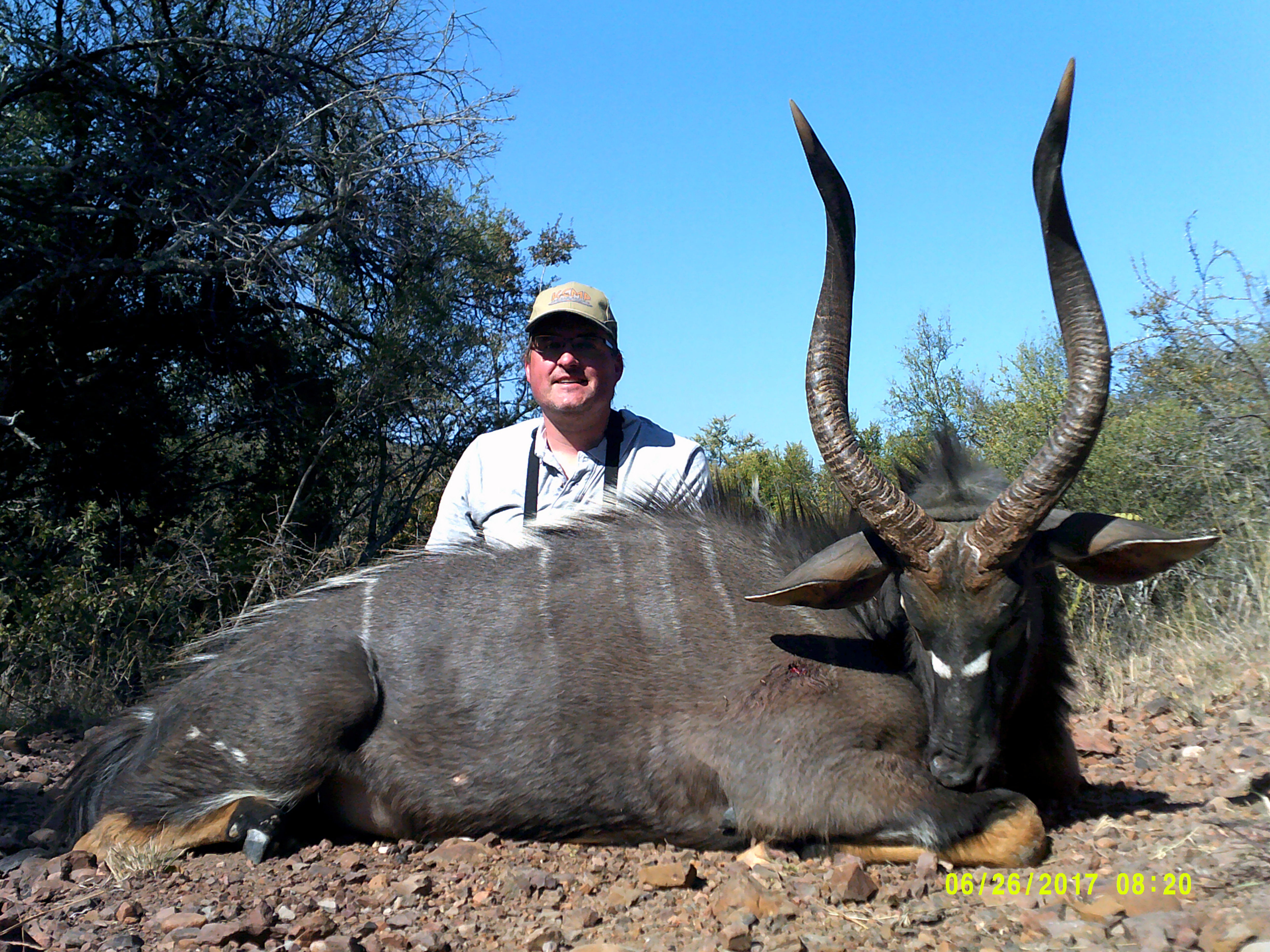 We talked about other animals I was interested in taking while in Africa. I stated that giraffe, was always on the wish list but the price would have to be right. The giraffe price has gone up quite a bit in the last 10 years. And taxidermy cost for doing a giraffe is a lot, so it can be an expensive animal. Plus I just didn't want to enter a property find one and shoot one in a matter of hours. I actually wanted to hunt one down. I know my expectations might me lofty but I want good memories of the hunt. We were only going to shoot one if we had time in the hunt. Well we had time so we went hunting for one. This particle giraffe was on a property with hills and tall trees. There were also six younger giraffe that were off limits on the property. The giraffe we were looking for was an old bull kicked out the herd.
Well lets say that it took three hard days of hunting to get this bull on the ground. We would only hunt to 2 PM and call the day off because it would be too dark to take the animal apart and butcher. Plus it would mess up our night hunting. I was using 9.3X62, that was the PH's gun, it was loaded with Barnes TSX ammo. The gun was accurate!
This old bull giraffe was smart and he knew he was being targeted. At first he would run and mix in with the other giraffe so we couldn't track him. Then he got smart and hide in the trees. We had to climb trees and do a lot of glassing to figure out where he was hiding. Finally on the last day we could hunt him, we found his location and I climbed up a hill. I carefully got on the sticks, took a shoulder shot and watched the giraffe run about 75 yards and go head first into the ground. When we walked up on him his left hind quarter was all infected and the giraffe had a major injury that no one knew about. He couldn't have been far from sepsis. So I finally got my giraffe in South Africa. 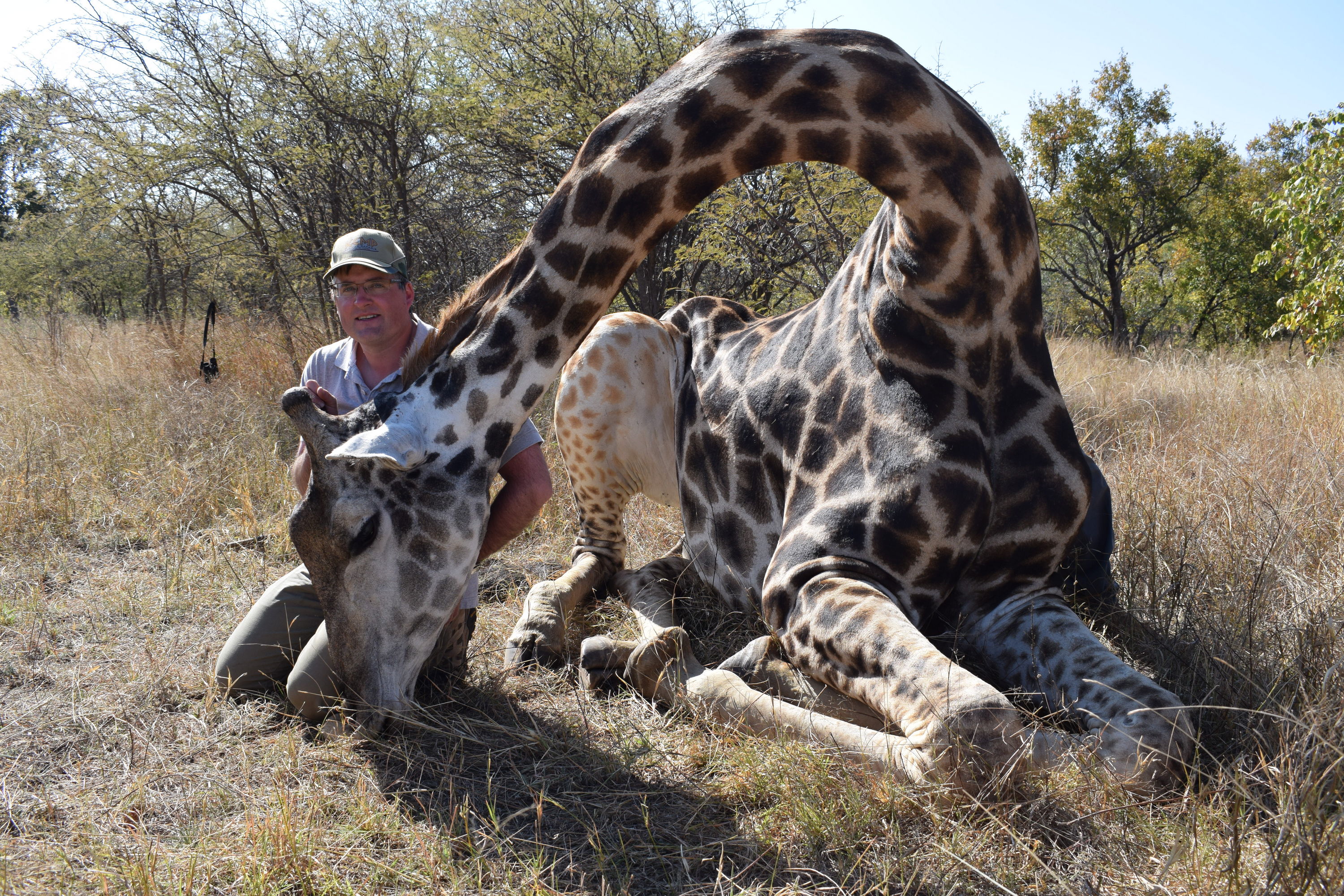 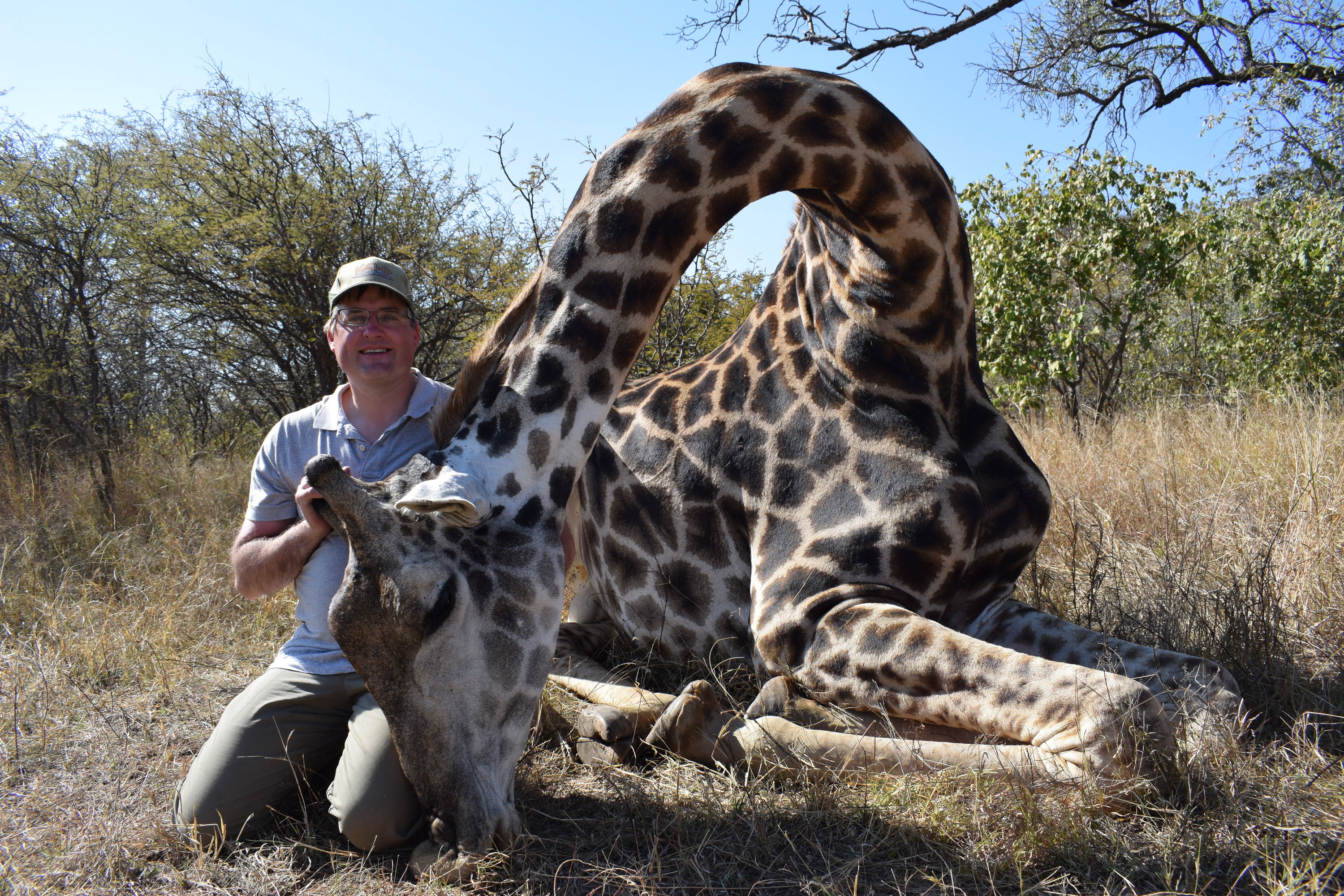 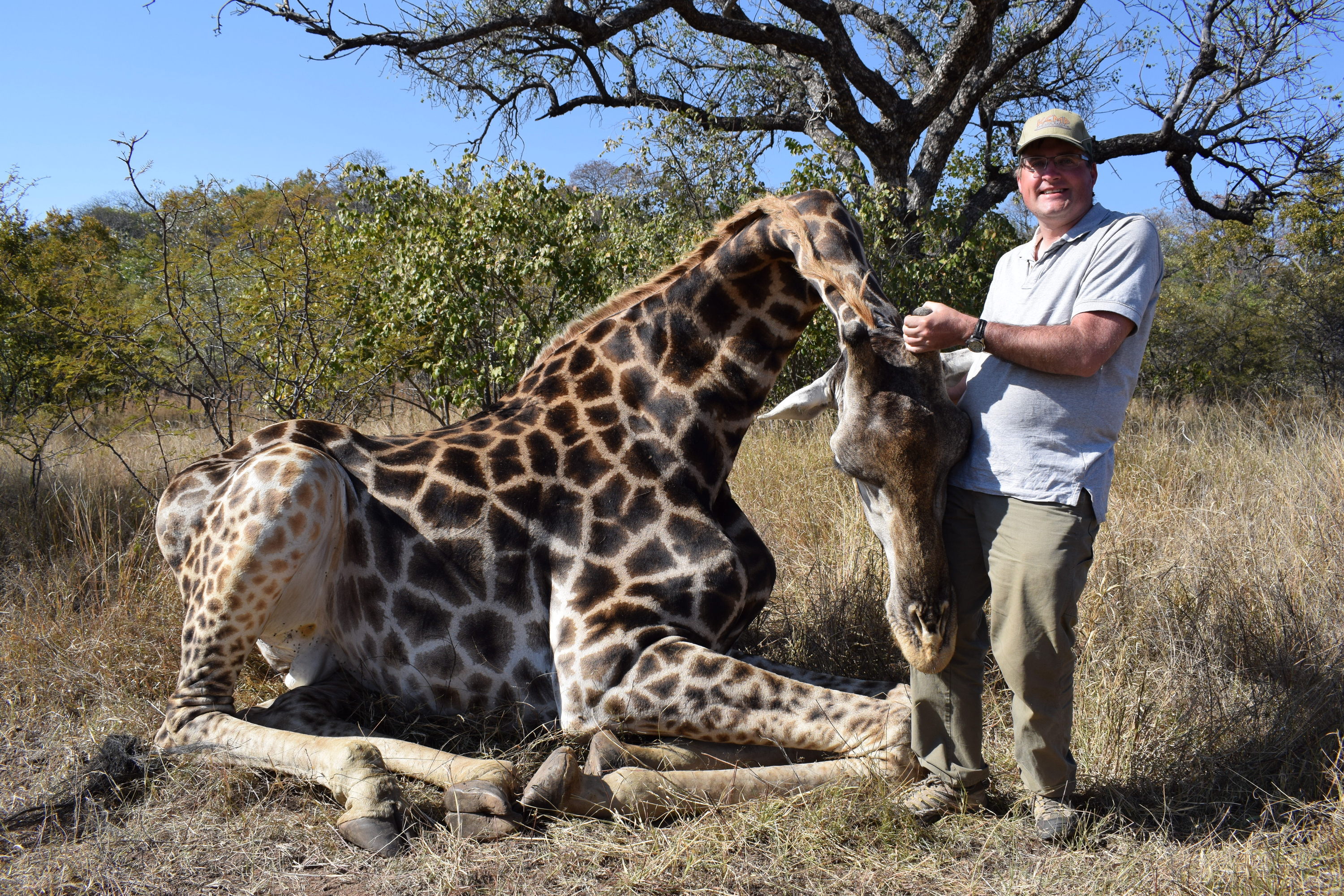 Well, we continued every evening to hunt the civet cat, "the black leopard of Africa", as one of my PHs called him. I must admit, I grew in love with this crafty night critter. He had learned how to fool the motion sensor by the bait, by moving very slow and carefully. Well we finally got the upper hand. My PH that night predicted when the moon rose he will be there on the bait and you will get a shot. And he was 100% correct! At 9:30 PM the moon rose, the animal came to the bait, I put one shot through him with the .223 Rem quartering too and it was all over. We celebrated like we shot a 225 pound leopard! I was elated to get a civet cat. One of the hardest earned trophies for me. I will be doing a full mount. I hope the pictures do this magnificent animal justice. 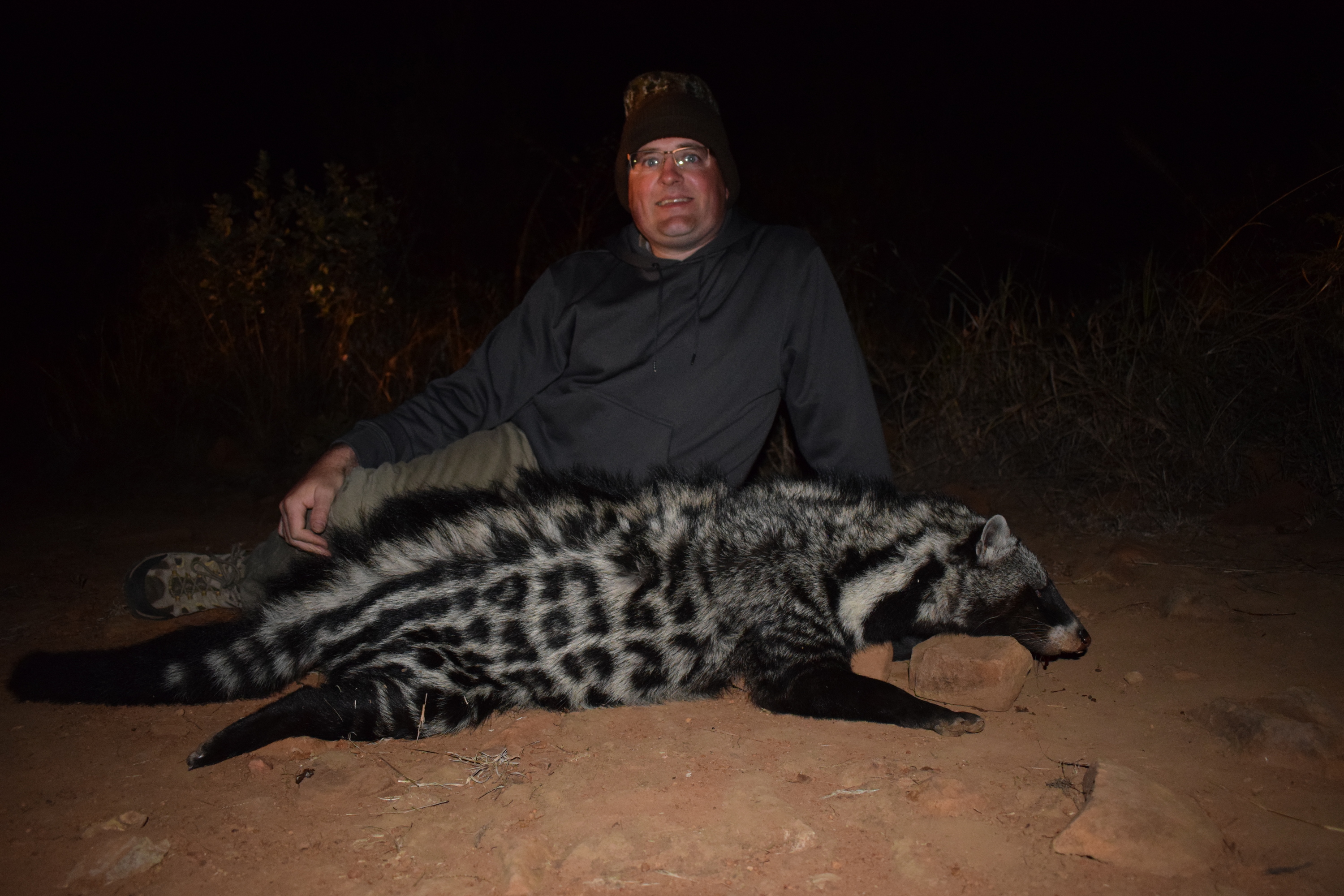 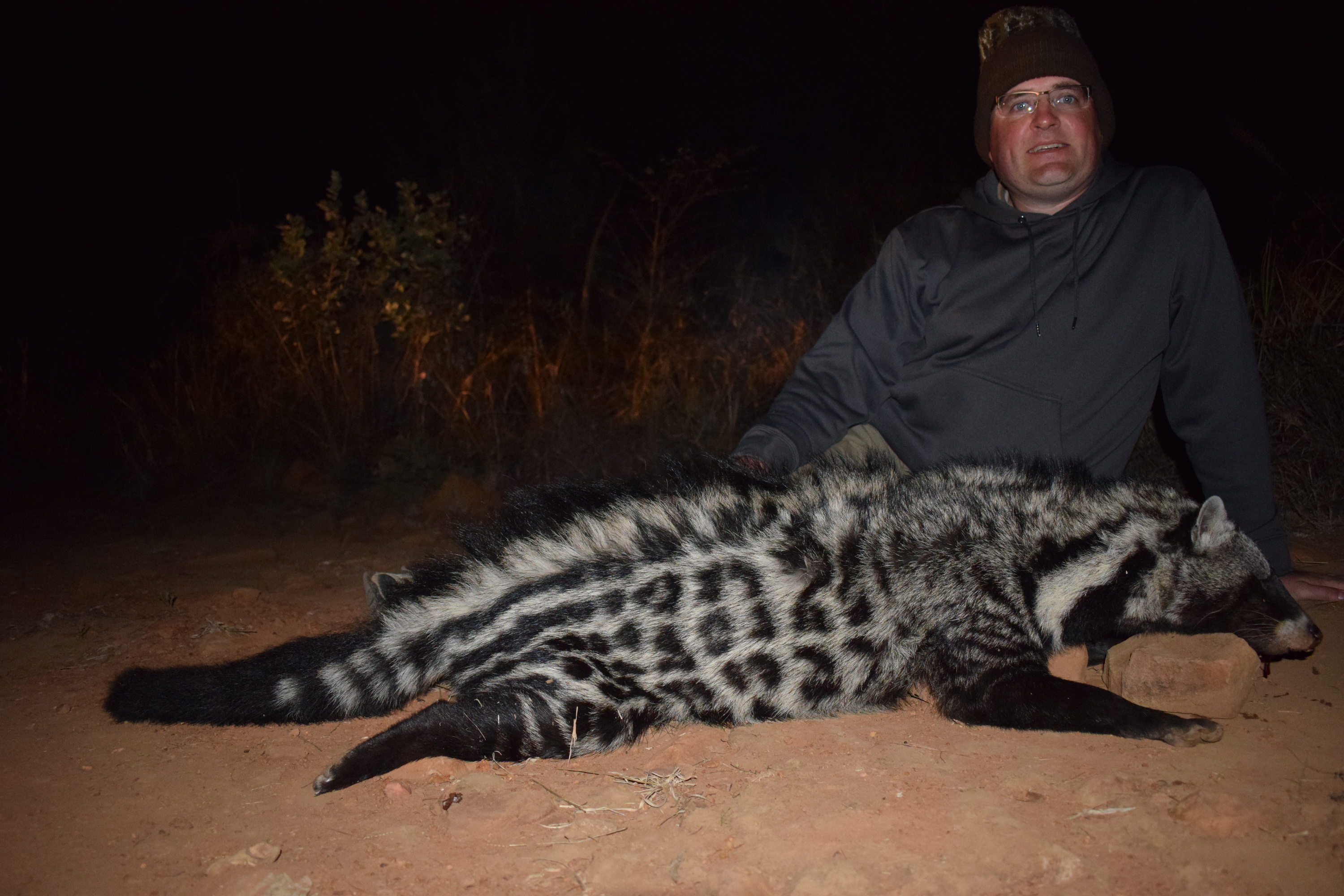 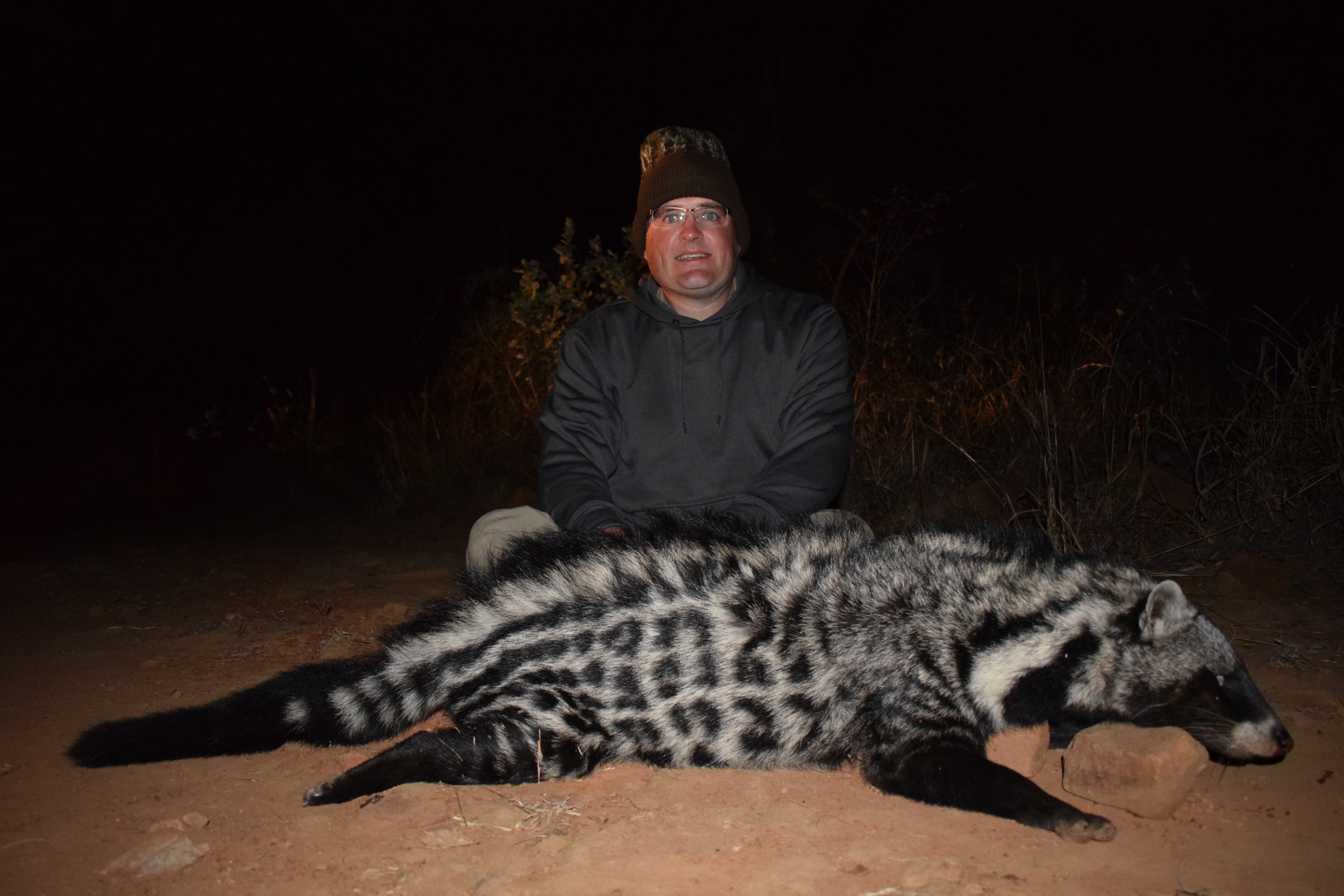 The final day we were down to just two night animals on my list the serval and the large spotted genet. I just didn't have any luck on the serval, we hunted hard but it wasn't meant to be this trip. I almost got on a warthog with decent tusks this trip too but fate dealt me bad deck of cards and the animal spooked before I got a shot off.
We went back to the valley I shot the nyala on, it's a stunning piece of property. We were talking about past successful hunts and all the great animals taken.
It was getting dark and we were driving around looking for warthog, when a kudu crossed the road up ahead. We stalked up on it and he was not sticking around to put a show on today. I made a impulse decision as he stopped in the trees and put a shot into his neck. I broke his neck but he was still alive and needed a second shot to put him down for good. I was not sure how big he was but he looked pretty through the trees. Everyone was making guesses but he ended up being 53 inches! Not bad at all! I love kudu hunting and will try to take a kudu every trip in Africa! 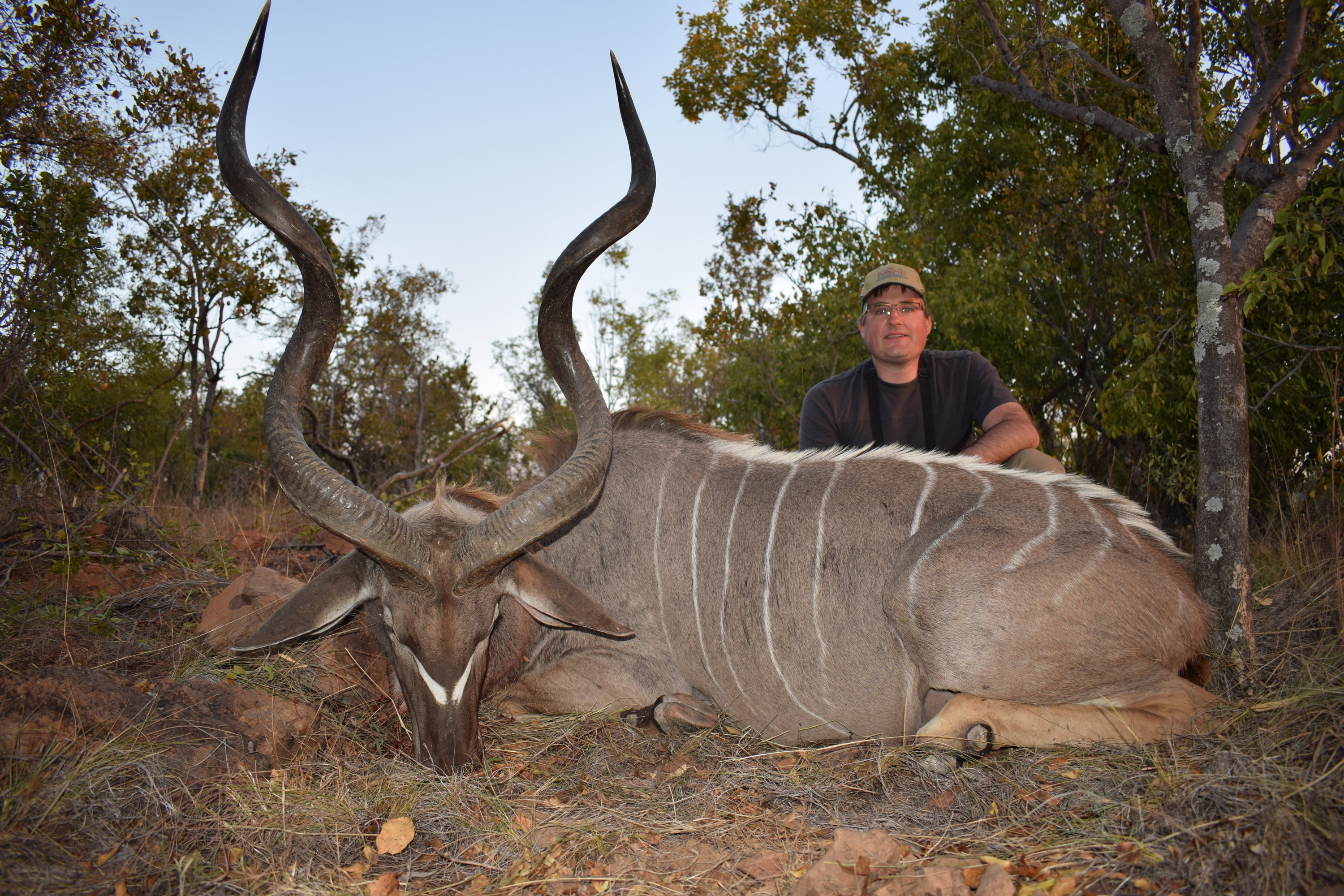 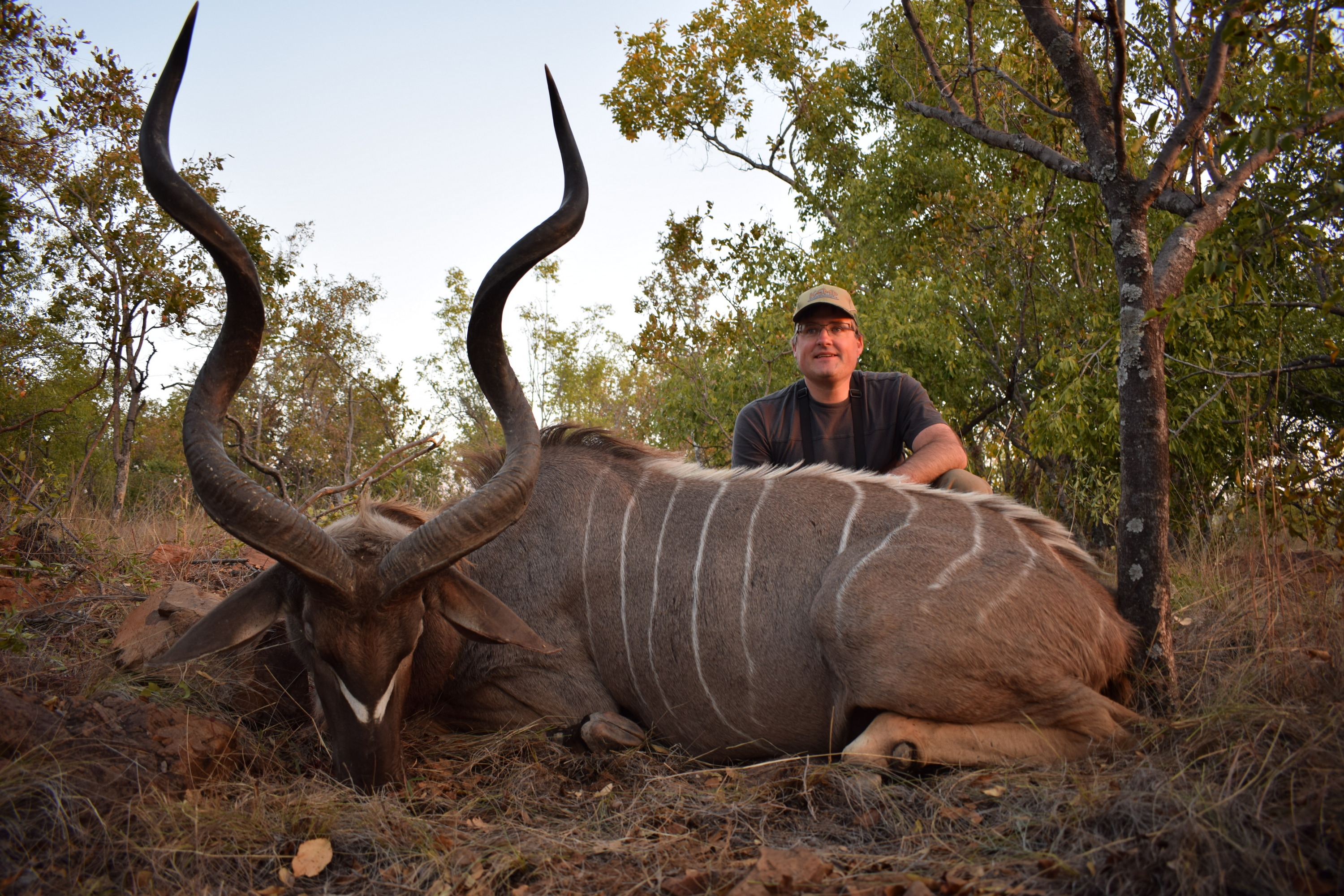 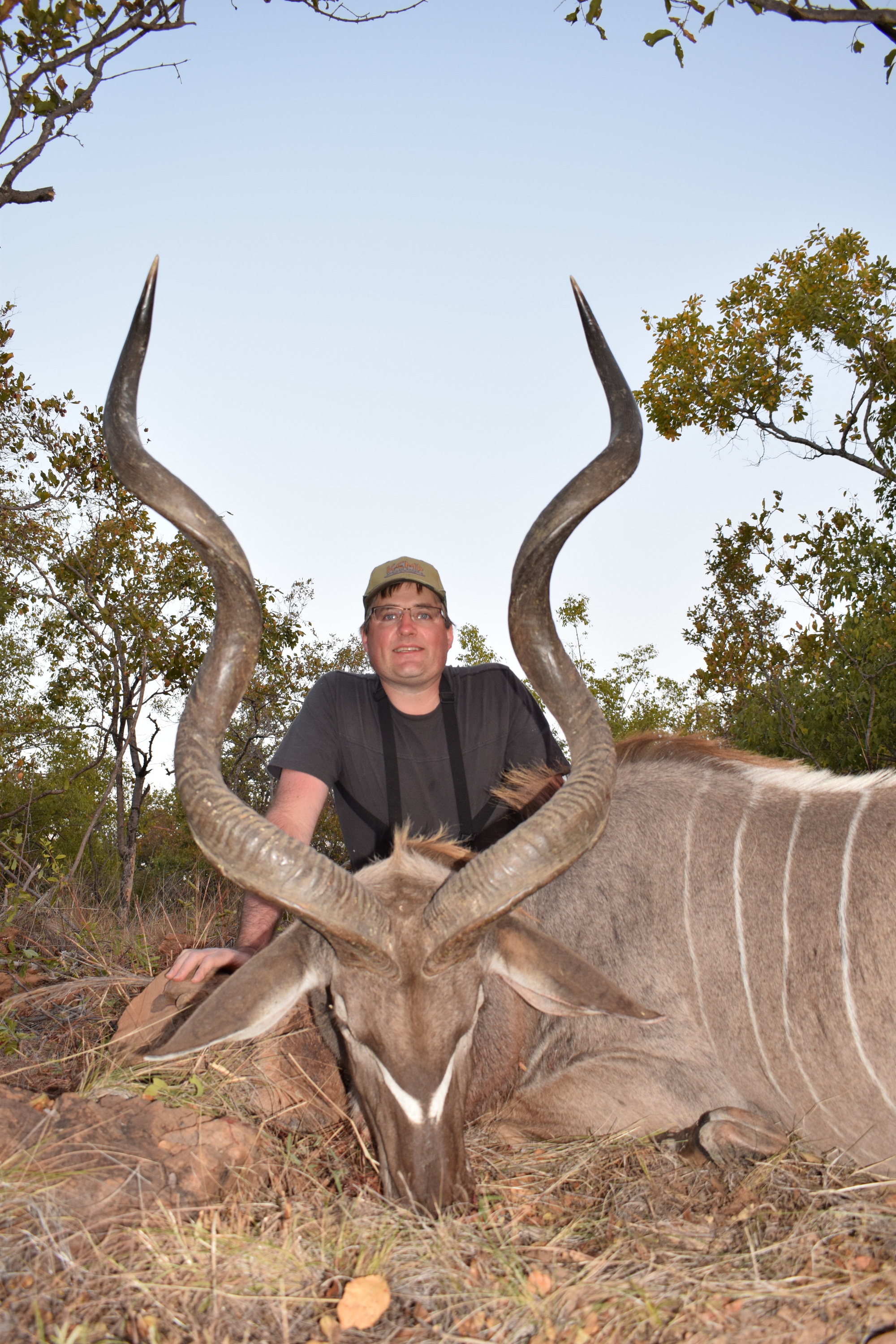 That night we had a grand feast outside by the fire it had been an excellent hunt. I didn't count on hunting that many animals but what the hell. I don't hunt that much at home anymore and this is Africa the ultimate paradise.

I always consider myself lucky to have hunted as much as I have. Thanks to AH! I learned a lot!
The final night we went out for a final night hunt spot lighting and I finally got a large spotted genet with the 12 gauge shotgun. 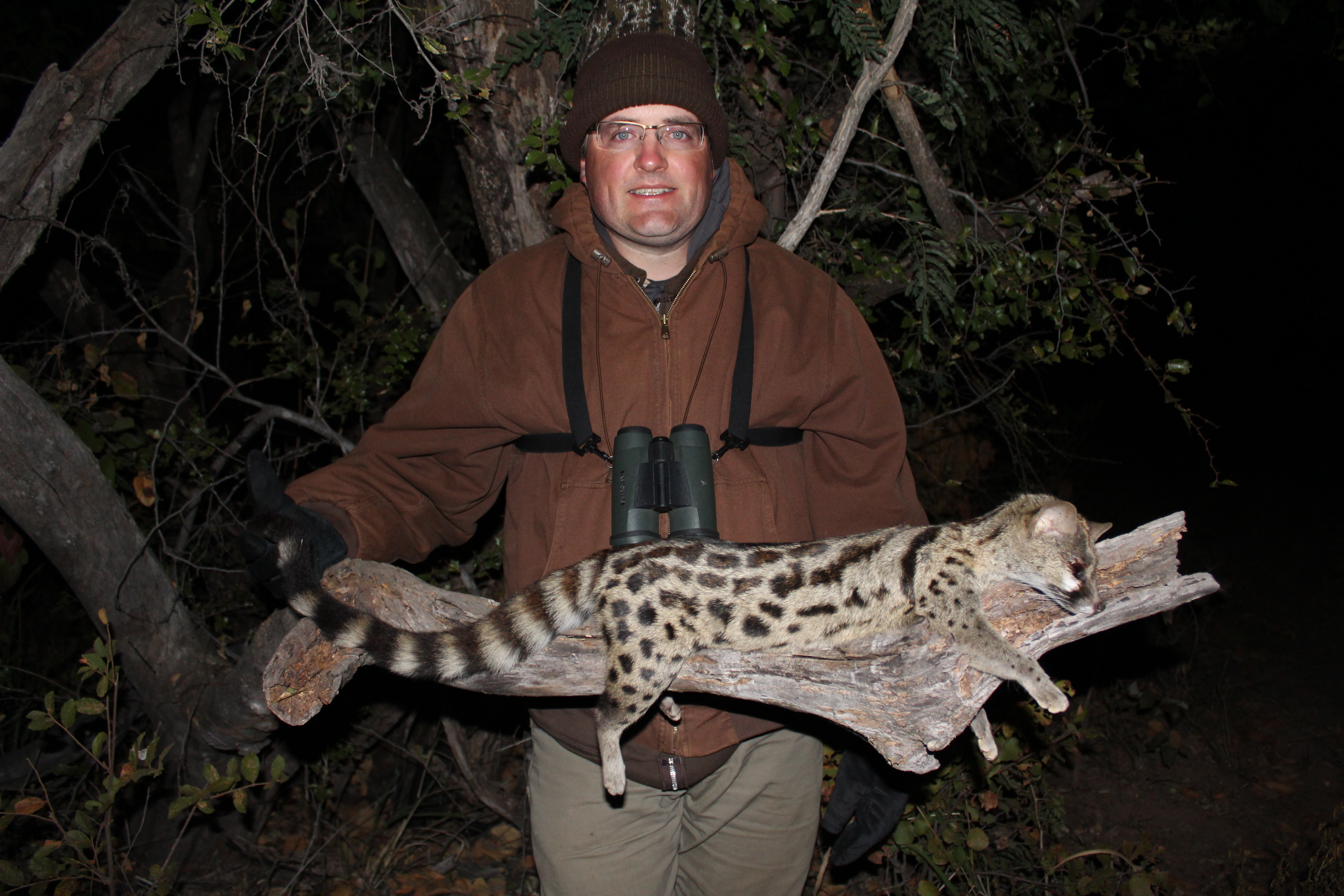 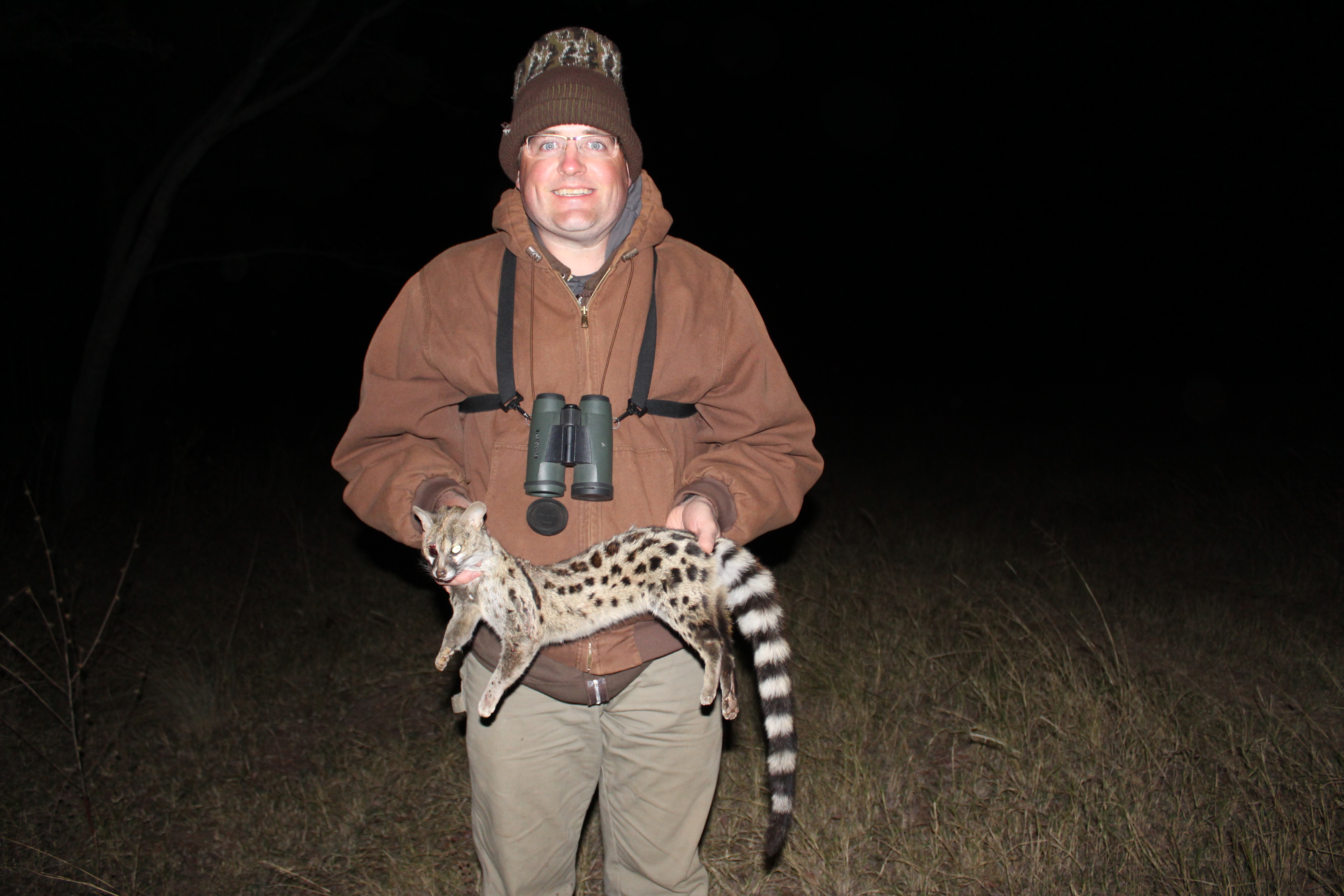 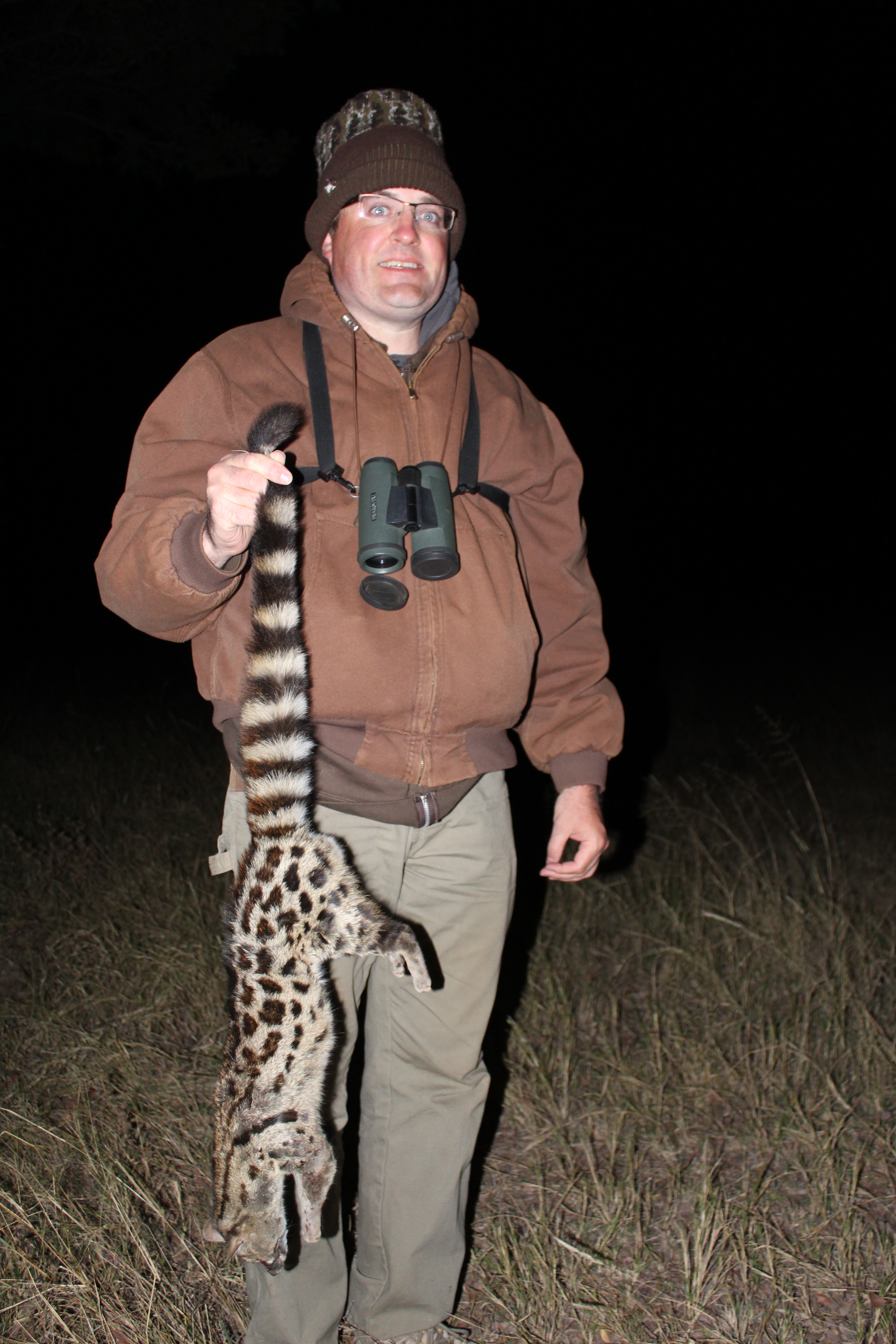 In closing Kemp African Safari, offered me a excellent hunt!!!!!!!!!!!! I would not hesitate to contact them for your hunting needs.

Many great memories! If some one has questions about the hunt you can always private message me about the hunt. I apologize for grammar mistakes, night shift has me making lots of typing errors.

Great hunt @enysse! The smaller guys are often a much tougher hunt than the big guys, especially since fences don’t keep them in. I love these types of hunts.

I shot a serval in the same area you were hunting, a couple of years ago. I was told there were plenty. We took mine on the second night of a 12 day hunt. And never saw another one, even though we were out every night hunting other animals. This is not like hunting kudu, where you know they are there (especially on a fenced property, even a large one). You just have to put in the time, and hope that the hunting gods show you some favour.

A great hunt, and a great report. Thanks very much.

You had one heck of hunt and congrats. The taxidermist will be happy with all that work. LOL

Wow you really had a great hunt with a variety of species, Congrats once again!
John 3:16

I actually think the hunting would have better if the weather had been warmer. I think the cold weather at night was slowing the action down quite a bit! Having had some time to think about things. And talking things over with family and friends. I definitely want to go back to hunt at some point. I will as always be scanning the hunting advertisements on AH. I love plains game hunting but also at some point want to hunt cape buffalo and leopard. My significant other says besides her, I live and breathe to hunt and be in the wild. I really want to take an old warthog with big tusks too! I want to keep things positive in my mind and continue to dream about Africa while I'm at the hospital pounding hours away helping patients.

Thanks for all the kind comments, I tried to post as many pictures as possible so the viewers of AH can see the beautiful animals from all angles. I always tell people I'm just a dairy farmer that had big dreamers and a non-stop work ethic to make my dreams reality. When people tell me it's not possible, my question is always, have you tried yet? Never give up hope and fight the good fight. Wildlife conservation is always the good fight.

I always enjoy your reports Eric. Lots of great animals that you took on this trip. Many that most african hunters never even see. My hats off to you. It looks like it was a great hunt. Congrats
Bruce

It was a total team effort on this hunt. I'm only as good as my three PHs on the hunt!

I hope everything fits in the house right, most likely it will be difficult

....that means less taxidermy in the future. I know a certain party that doesn't want any more dead animals in the house

What a great report @enysse! I really enjoyed reading about your hunt and congratulations on your success.
Looking forward to the next installment on your quests for animals.

//Gus
You must log in or register to reply here.

The land of 'milk and honey' - South Africa
2