This hunt took place because of AH. I was going to be passing through Johannesburg and wanted to pick up a plains game hunt while in the country. Two requirements were I wanted the hunt to be within reasonable driving distance of Tambo. (I didn’t want another flight) I also wanted a reasonably priced hunt with an AH outfitter.

After seeing the above post I started communications with Gerrit and booked the hunt.

Gerrit met me at Tambo and after clearing SAPS we headed to the family farm west of Rustenburg. The farm is apx. 8,000 acres. The front part of the farm is fairly flat with open areas. The back of the farm has hills and fairly thick brush.

I was put up in a 2B/2B guest house that is in great shape. Another guest house is also available for larger parties. 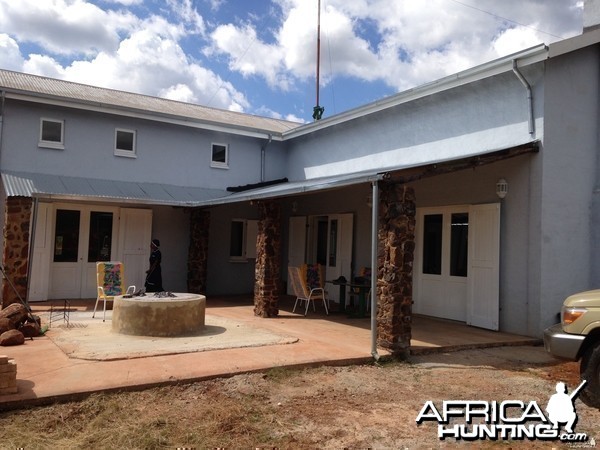 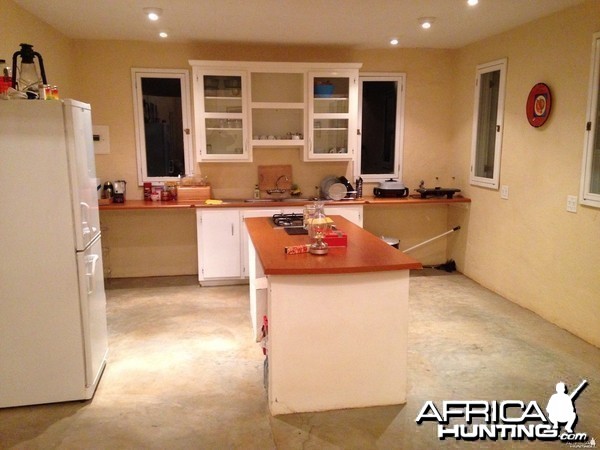 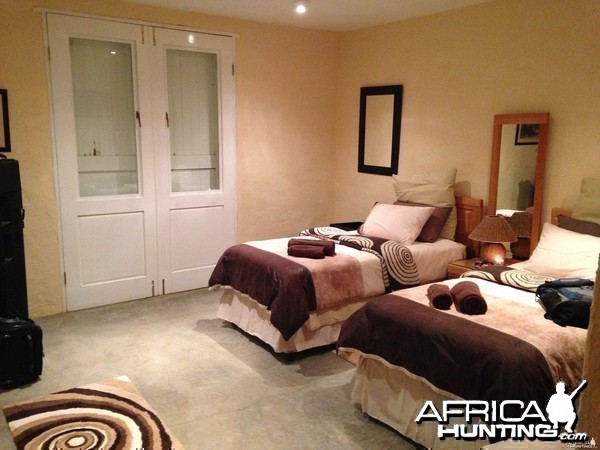 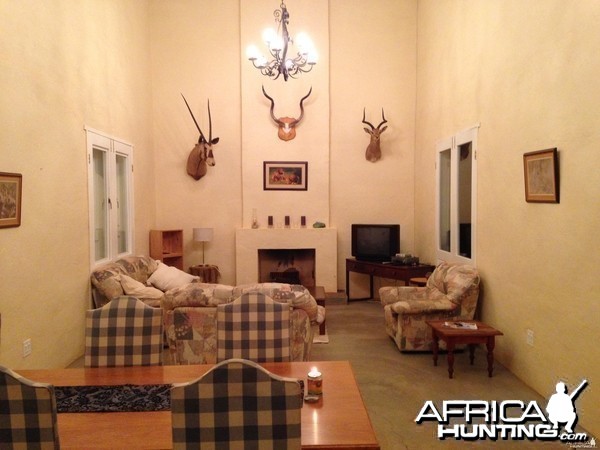 Most morning and afternoon hunts were spent driving to a specific location then walking and stalking for 2-4 hours arriving back at the vehicle. If time permitted we would then drive to another spot and repeat the process.

The blesbok was spotted at 120 yards. We crept up to about 100 yards for the shot. He ran about 20 yards and collapsed. He was with a herd that we hadn’t seen. (Nor they us) They stared at their fallen comrade, ran around and stared some more trying to figure out what his problem was before we moved forward and they ran off. 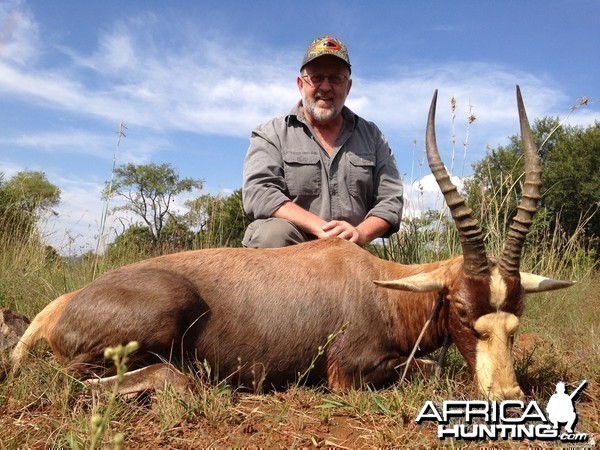 The ostrich spotted us walking at 50 yards. He ran off to 120 yards and turned to look back. DRT. 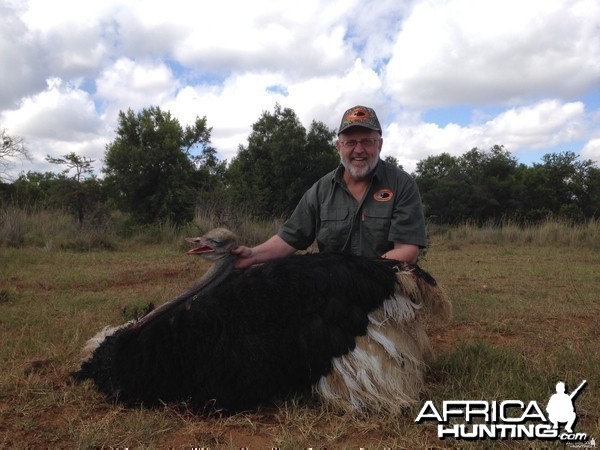 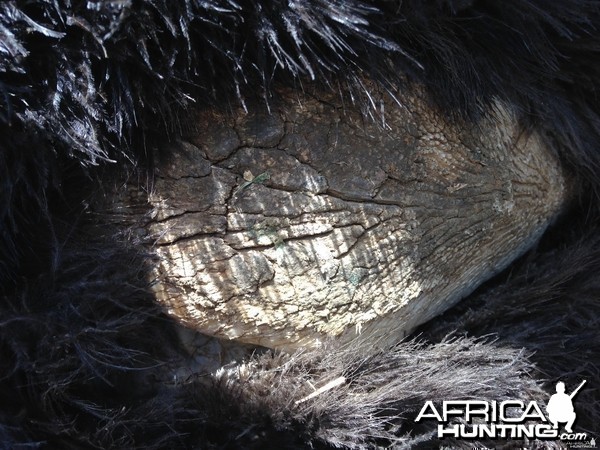 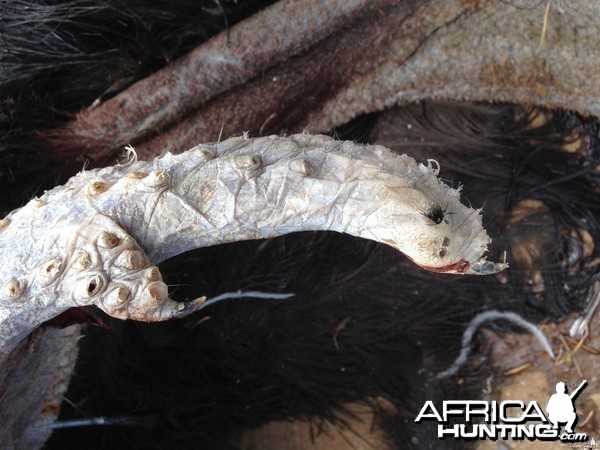 Claws on the end of ostrich wings.

The impala was spotted at 100 yards. He kicked like he was shot to far back and Gerrit was concerned of a gut shot. The shot would turn out to be a little low behind the shoulder. We tracked him for 100 yards before finding him. I really like the outwards flare. 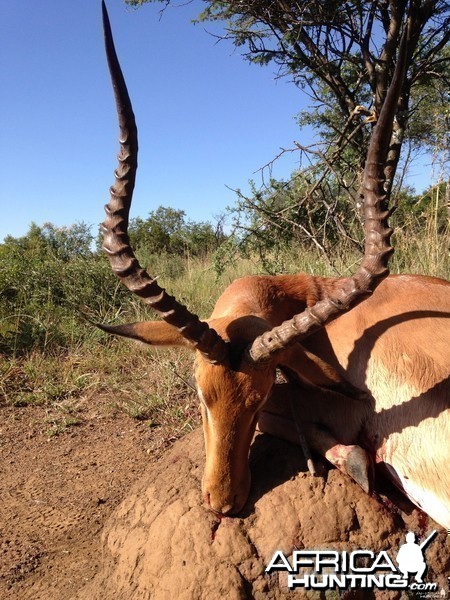 On one of the walks a group of blue wildebeest spooked 25 yards from us. A bull with horns two inches beyond the ear tips stopped at 40 yards trying to figure out what we were. Gerrit didn’t even have to tell me he was a shooter. At the shot he went down kicking. I thought he was down for good. Gerrit told me to shoot him again. He got up and ran off before I had a chance to fire again. We spent the rest of the afternoon and the next morning trying to find him to no avail. There was no blood at all. Gerrit’s German Shorthair (his tracking dog) was away being bred. The family Jack Russells never really picked up the trail. This was completely my fault. I shot to high in the shoulder, probably stunning the spine. I was shooting a 375 with 300g Barnes. This just proves once again what a tough brute these guys are. 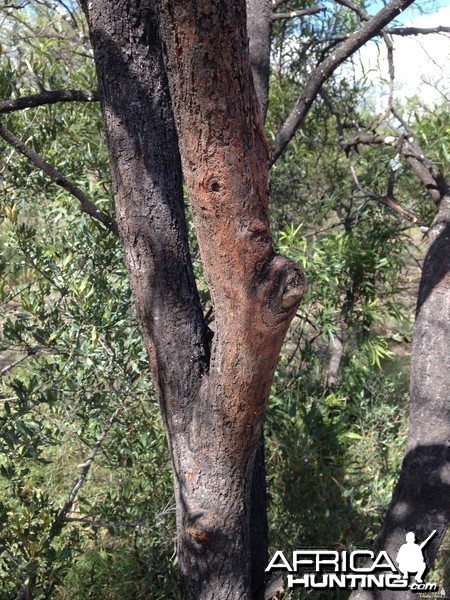 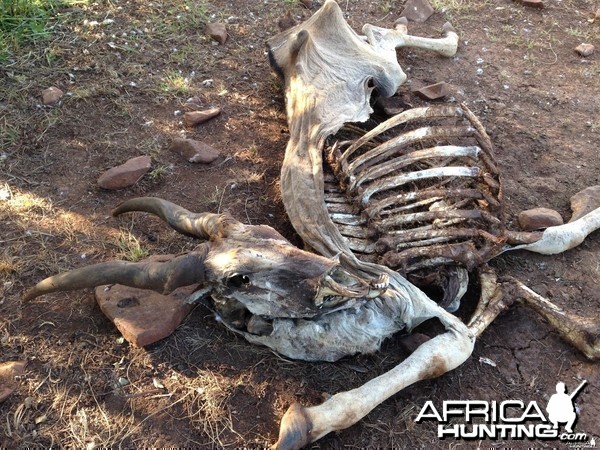 One morning we went to another farm for black wildebeest and springbok. The second group of wildebeest we saw had a good bull. We watched them for ten minutes but he wouldn’t separate from the others. Finally another good bull made his way up from behind the rest and presented an opportunity. At the shot I lost him in the running herd. Gerrit was watching and said it was a good shot. After 100 yards the bull peeled off and went down.

Gerrit is a full two meters tall and carries 120 kilos like the former club rugby player he was. It is nice having him around to load a wildebeest for you! 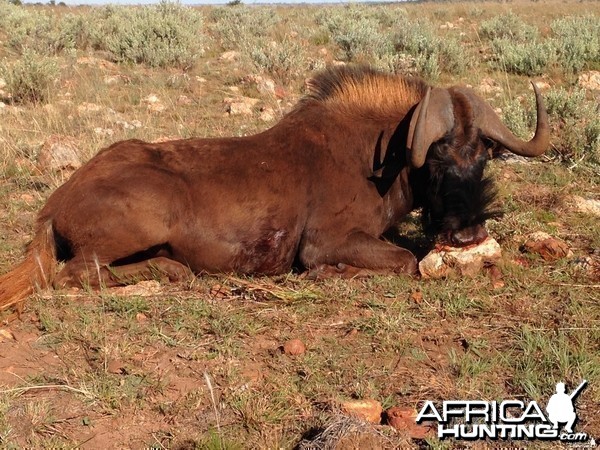 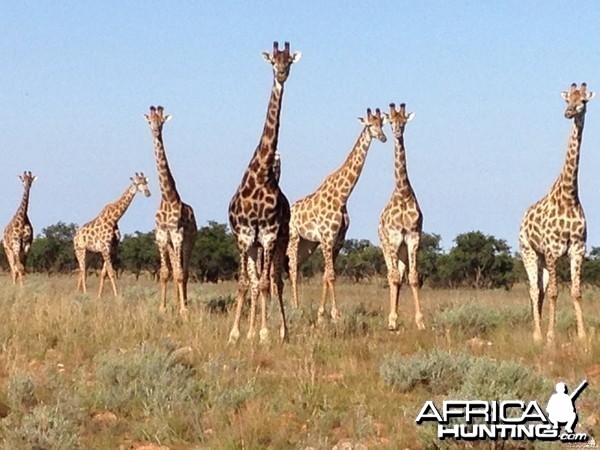 Giraffes were curious and came within 25 yards while taking photos of the wildebeest.

A little later we spotted a group of springbok rams. One with nice hooks provided an open shot and went straight down with a less than perfect shot.

Gerrit didn’t even need my great strength to help load the springbok. 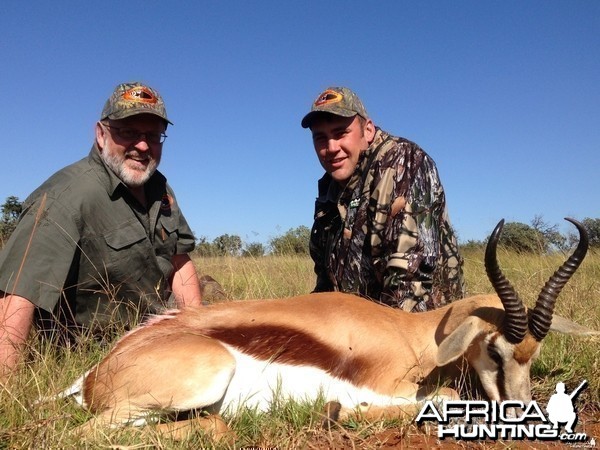 One afternoon while driving we saw a nice reedbuck. We proceed on, stopped the vehicle then stalked back to find him. He was lying in grass and we got to 50 yards of him. From Gerrit’s lofty height he could see the entire body. Being vertically challenged I could see about three inches of neck up. I took him right below the chin. 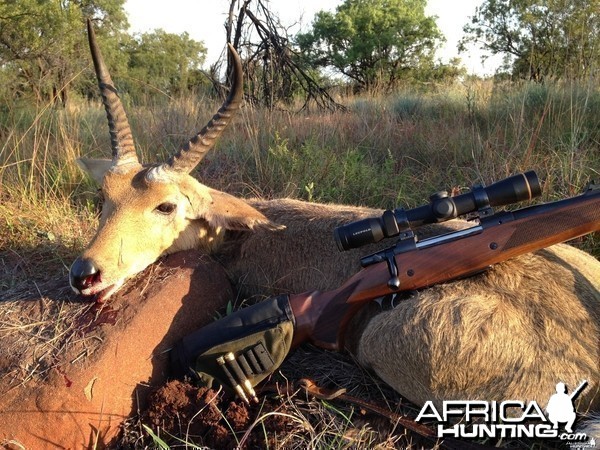 Periodically we would take out the 22 and shoot franklin and guinea. Sadly I forgot to take photos of my few triumphs.

One of the principal targets of this hunt was nyala. Gerrit has some bulls in the 24-28 inch range and one around 30 inches.

One day while driving we saw a massive nyala in the shadows with hard flaring horns that would go well beyond 30 inches run off. Gerrit had never seen this bull before. We stalked about 50 yards before seeing him again and he had transformed himself into an immature kudu! Amazing what these animals will do to keep from being hunted. That bull with an nyala cape would make one impressive 35 inch trophy.

Up until the last day I had not seen an nyala. I was beginning to think Gerrit would come out at night with some nyala hooves and leave some tracks for us to find the next day.

On my last morning hunt while driving we saw two nyala bulls at 50 yards. One was 24 inches and the other 28 inches. We stopped the vehicle waiting for them to move off. They stared at us then continued browsing. We were afraid to move and watched them for five minutes. We decided to back the vehicle up a ways and commence a stalk. On our approach they ran off. We tracked them for two hours over the wet and rocky ground loosing and regaining the tracks. Finally, my time had run out and I needed to pack to leave.

I had the opportunity to take mature kudu, warthog, zebra and hartebeest but declined. Gemsbok were also seen but no attempt at a stalk was made.

Gerrit is a great young PH. His lovely wife Yolandi is a wonderful cook. I had a great time and enjoyed myself in their company. Bos en Dal provided the hunt I was looking for. 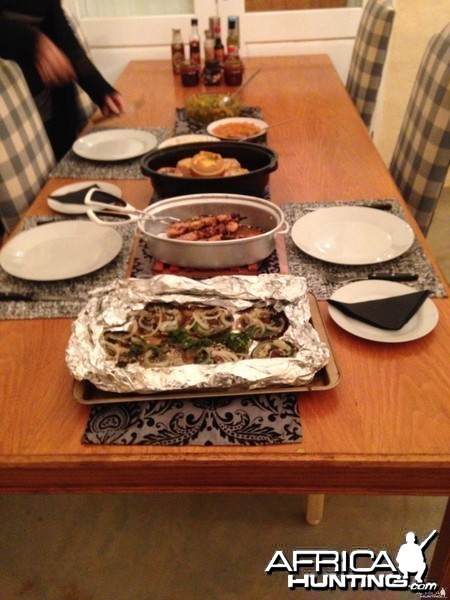 Typical meal served by Yolandi. Even though I walked all day I consumed more calories than I burned off. 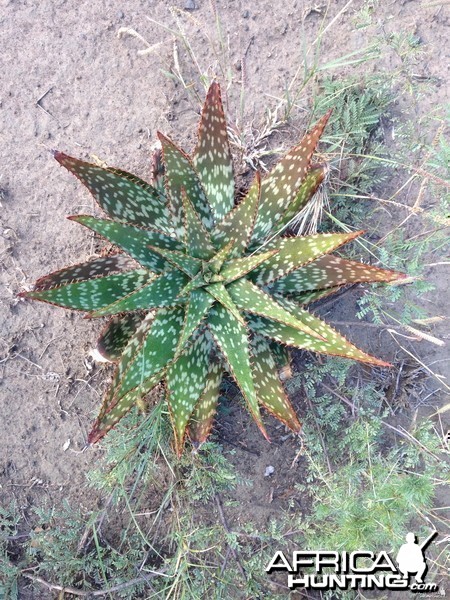 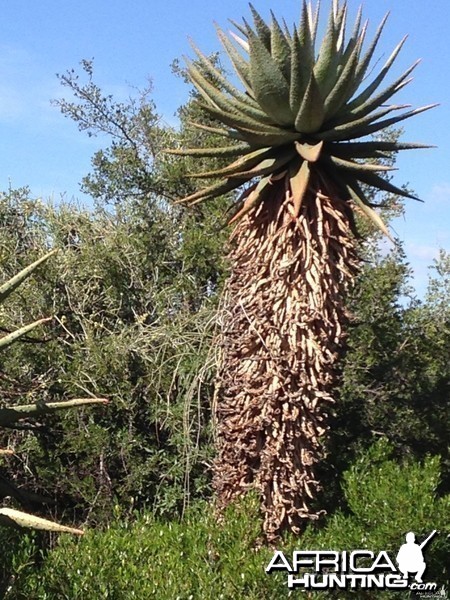 Aloe plants were a common sight. 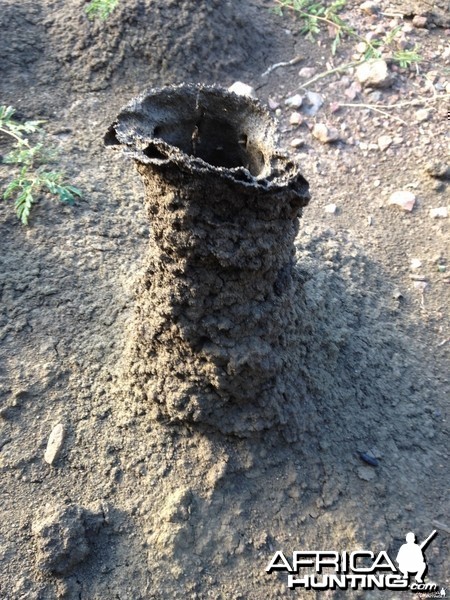 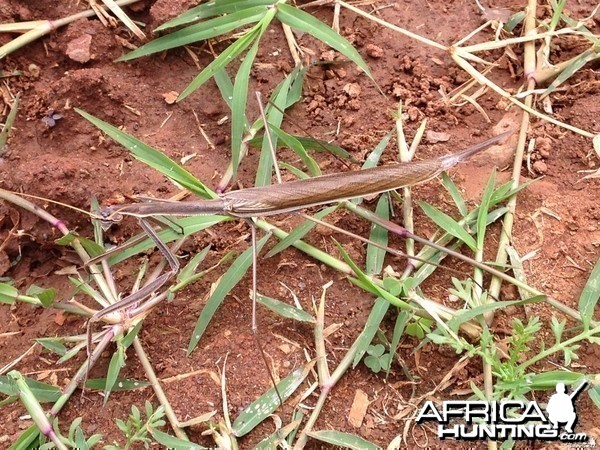 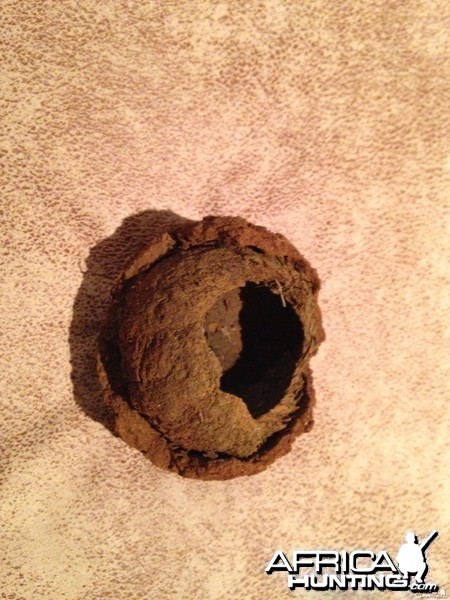 Dung beetle nest. Eggs are placed in the middle of a ball of dung which is then wrapped in mud. I guess the larva eat their way out. What a way to come into the world. 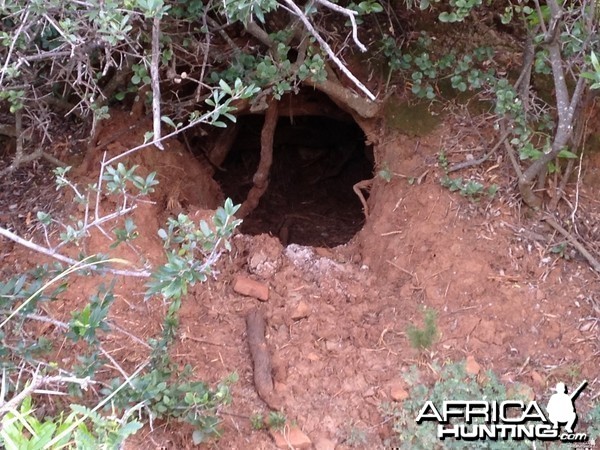 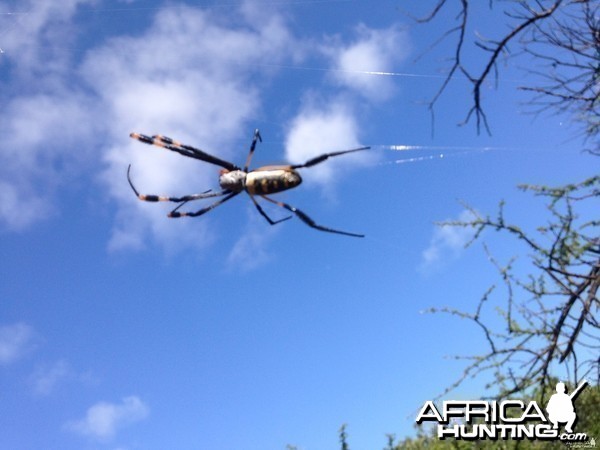 Spiders were out in force with the heavy rains this year. 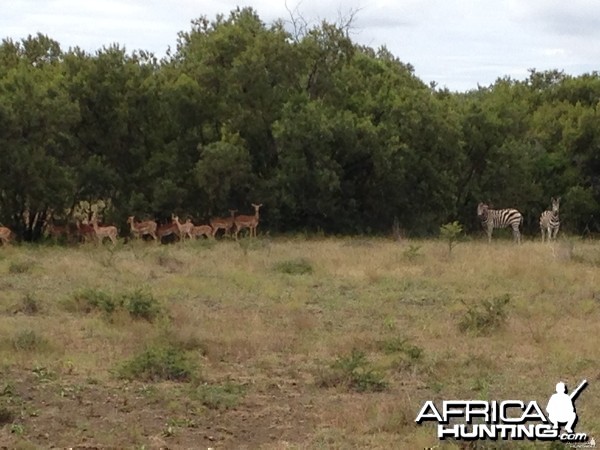 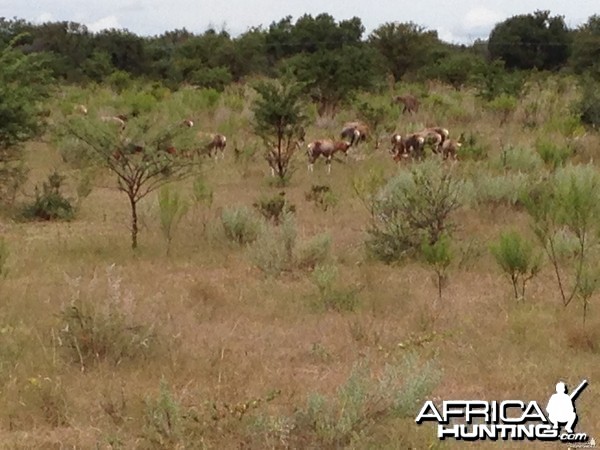 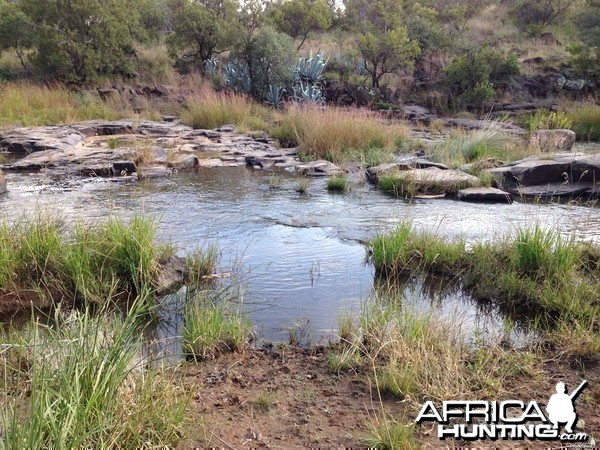 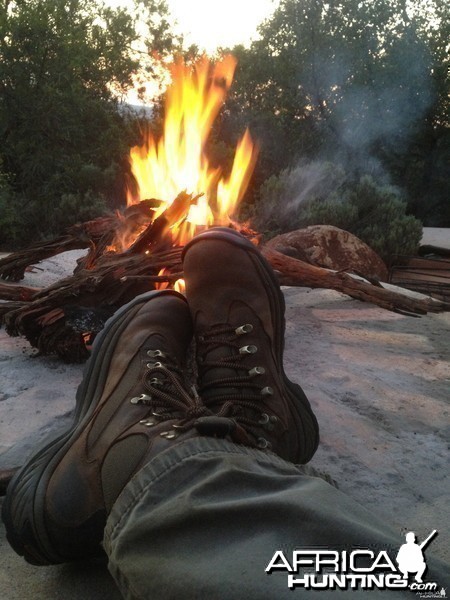 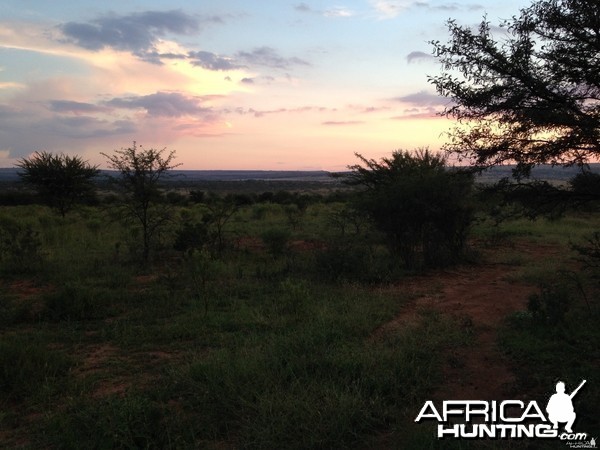 The end of another beautiful day in Africa. 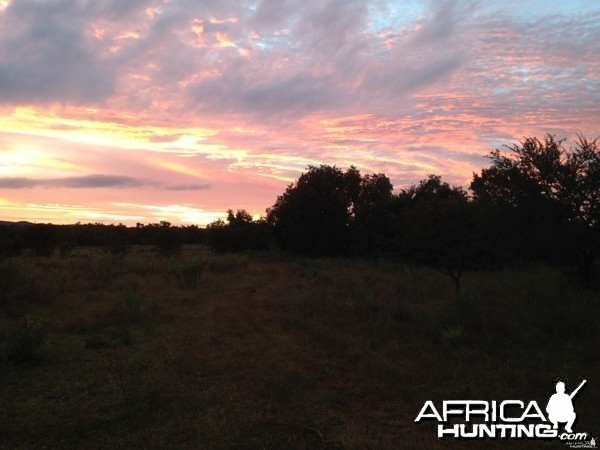 The end of another great safari. Thanks Bos en Dal!
Last edited by a moderator: Dec 1, 2016
And here I am, returning to Africa of many faces;.... the sloe-eyed temptress with flowers in her hair who stole my youth and my heart, and left me an old man with a kaleidoscope of conflicting memories of many dashed hopes and some fulfilled dreams. E. Echols

couldn't think of a better way to wind down after your zim adventure .
nice trophies once again bud,
sounds as though gerrit and family looked after you very well ,wheels .
thankyou once again mister
THE HUNTER; The person that pays over 90% of the cost for the presavation and maintance of wildlife and gets zero credit for it ................

Congrats for the good time and nice trophies !

The cover pictures are amazing. Lots of rain, you can keep the spiders!

Winding down with a week of Plains game hunting. That's a good one.

Did that Reedbuck just jump in the Bakkie?

I do wonder how much game you guys never see while walking around in cover!

Good to know Gerrit provided a good hunt for you. Thanks for sharing.

I love the reports where you can just feel the wonder and excitement through the words. This was one of them. Sorry you lost the blue wildebeest... I'm SOOO ready to go now!!!
HUNTERS make importation bans work!

Oh, and thanks for posting the pictures of all of the "little things" like the dung beetle nest and the walking stick. For me, those can be some of the best memories and I greatly appreciate them.
HUNTERS make importation bans work!

Hi Bob. Thanks for the great report! It is nice have AH members hunting with us!!
Pitty we never got you that Nyala. But all the more reason for you to make another trip to Africa in the future.

Enjoy the summer and your trophies when they arrive.

Thank you for posting your hunting report!
Jerome Philippe, Founder of AfricaHunting.com

The fact that you had a great time was enough getting some great trophies was even better. Congrats!
Enjoy Life Now! It has an Expiration Date.

Thanks to all of you for the kind words. I am glad you enjoyed the report.

The PG hunt worked out well after the DG hunt. That way I knew how much money I had left! If I have the time I prefer trying to hunt two places on an African trip and get the most out of my travel costs. Brickburn, I haven't figured a way to hunt 3-4 places on a single trip yet. I need some more experience at the foot of the master.

Gerrit, An nyala would have been nice but a great hunt and a great time are far more important. I had both. The nyala is just one of many reasons to keep me coming back for as long as I am physically able. Africa is my second home.

Gerrit sent me a video of the hunt this week.

He did the video along with the rest of his duties. Videographer is another title you can add to his abilities.

Thanks for the video Gerrit!
And here I am, returning to Africa of many faces;.... the sloe-eyed temptress with flowers in her hair who stole my youth and my heart, and left me an old man with a kaleidoscope of conflicting memories of many dashed hopes and some fulfilled dreams. E. Echols
You must log in or register to reply here.
Share:
Facebook Twitter Reddit Pinterest Tumblr WhatsApp Email Link

Damon Engel Saul Damon Engel wrote on Saul's profile.
Hello! I noticed your E Type in your avatar. What year is it? I have a '69 that looks identical, minus the wire wheels. My car has the steel rims, as I understand it,a more expensive option, but I like the wire wheel much better!
Aug 6, 2020 •••