Some testing I did on .22 ammunition

Hi Guy's below are the results of some .22 ammunition testing I did recently.

Having recently purchased a new Lithgow Crossover .22 rifle to use as a hunting rifle and Field Rifle competition rifle I set about the task of finding the most accurate brand and type of ammunition for my rifle. As some of you may know each and every .22 rifle has a particular liking for a certain brand, projectile weight and velocity combination and unfortunately very few have the same preferences. So I purchased a variety of .22lr ammunition all standard velocity with 40grn solid projectiles consisting of the following brands, Winchester T22, RWS Club Target, SK Standard, SK Match, CCI Standard, Remington .22 Target, Winchester Super Speed and Federal Premium Target. First I set up 8 targets at 50 meters and shot 5 shot groups on each target using each different type of ammunition. I then compared the groups on the targets to determine which type of ammunition warranted further testing, the results are shown in the photograph below. 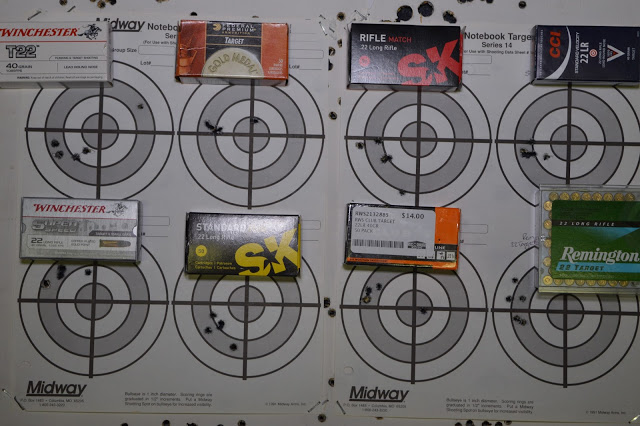 The results of my initial testing.
After comparing the results I decided on further testing of 4 of the 8 different types of ammunition those being SK Standard, Federal Premium Target, Remington .22 Target and RWS Club Target. The CCI Standard had performed very well and I decided no further testing of this was required.

For my second test I prepared 4 targets at 50 meters and fired 10 shots into each target with each different type of ammunition. I then compared the results, what I was looking for was consistent accuracy and I found that the SK Standard performed exactly as I wanted. The results of my second test can be seen in the photograph below. 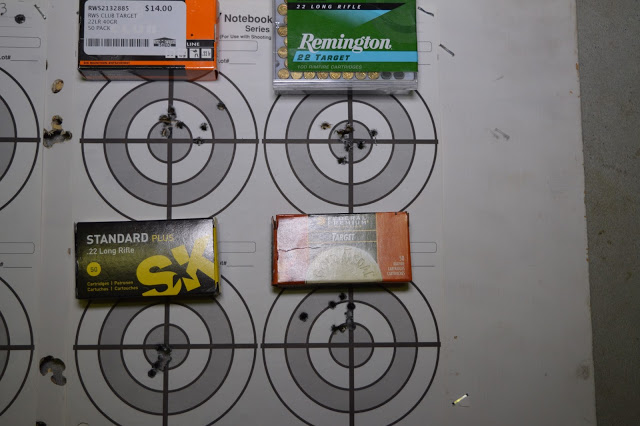 The results of the second round of testing.

Of the 4 types that I tested I have settled on using the SK Standard as my competition ammunition and CCI Standard Velocity as my general use small game hunting ammunition. All the ammunition I tested provided reasonable accuracy for most situations when hunting small game such as rabbits at ranges not exceeding 50 meters, however CCI Standard and SK Standard were the stand out performers in my rifle.
If a group of you get together and do the same testing you only have to purchase one packet of ammunition to test up to 10 different types. You may want to try a similar comparison in you rifle you may be very pleasantly surprised with the results.
I certainly was when I shot my first Field Rifle competition after the test and scored an almost perfect score on my last 50 meter target. 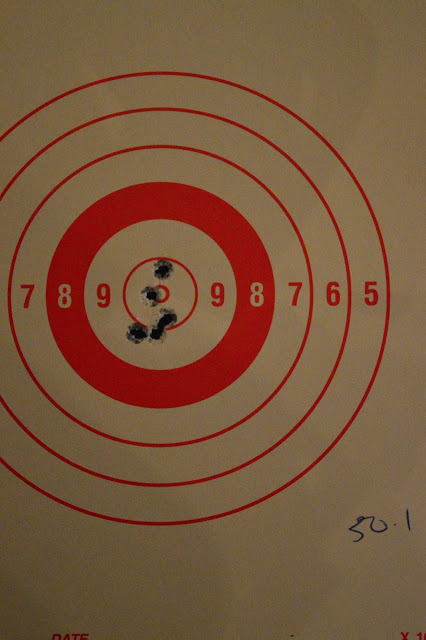 Interesting test. Thanks for sharing . I'm the guy that buys a brick and blames the misses on himself. Now I have an excuse. I was buying the wrong ammunition.
And here I am, returning to Africa of many faces;.... the sloe-eyed temptress with flowers in her hair who stole my youth and my heart, and left me an old man with a kaleidoscope of conflicting memories of many dashed hopes and some fulfilled dreams. E. Echols

Hunted
US and now RSA

Interesting.
I was shooting my new Ruger American 22 last week and decided to check
performance on a piece of wood.
At 100 yards, using plinking Federal ammo, it punched clean through 1.75" of pine lumber. I was surprised at 100 yds a 22lr would shoot through that much lumber. I need to check it on 2" and 2.5" pine lumber.

Years ago I had a Ruger 77/22 with the heavy varmint barrel & laminated stock topped by a Leupold VX2 4-12 with fine crosshair. I was able to get 1" groups with Federal Gold Match. The coolest thing was to be shooting & hear the bullets hit wood & have a spotter see them strike!
Former owner, Renaissance Firearms
M

I agree!! It would take me 5 years of shopping to find that much variety in 22 ammo right now...
Life is not a journey to the grave with the intention of arriving safely in a well preserved body, but rather to skid in broadside, thoroughly used up, totally worn out, and loudly proclaiming, “Wow what a ride!“

I did a test some years ago using several different rifles, including a Savage bolt and an Armscor M1600. Fiocchi beat a wide variety of brands and types by q significant margin. Testing was blind- my wife loaded the mags, so I had no idea what I was shooting during the testing.

I had to go to 3 different shops to get the range of ammunition I used, there is plenty of good quality standard velocity target ammunition available in Australia at the moment, it does get a little bit harder to get a wide variety of the higher velocity stuff. though. There was a time not too long ago when we found it almost impossible to get any US made .22lr at all, I think that made the importers look towards Europe as that's where a lot of the variety we get is made. I used 5 US and 3 European made brands in this test but could quite easily have just used 8 European made brands, though price does then become a factor. I paid between $7 and $15 per box for the tested ammunition.
Last edited: Mar 23, 2016
K

I have had the same problem with a 22lr being picky on the ammo it liked. I started lapping all my rifle barrels ,and they will shoot just about any good ammo. Forrest
P

Interesting results.
Thanks for sharing
M

I did a similar test years ago; was trying to see if I could find ONE brand of ammo that would shoot well in all three of my .22 rimfires......I didn't. Some of the stuff I used back then is no longer made; others are no longer imported. I have similar problems with reloading components: work up a good load for a particular rifle or handgun, and then the company that manufactures it (powder, bullet, primer) quits making that component......then have to start from scratch!
As others have stated, it's pretty much what you can find here when you can find it anymore.......still too many hoarders and panic buyers, and the "Rambowannabes" that buy their AR15 rimfire copies and burn up brick after brick after brick at the range.......they don't bother to aim, just shoot from the hip and pull the trigger........as fast as they can.
I think things are going to get bad again as the election gets closer in the fall............................
"If your dog thinks you're the greatest, don't go seeking a second opinion!"

I've had really good accuracy results out of CCI standard 40 gr also. Another one that really blew me away was Wolf Gold Match 22 LR. Haven't seen it in a long time though. Unfortunately ran my stock of Wolf out several years back.

Cheers,
Cody
"Montana seems to be what a small boy would think Texas is like from hearing Texans" John Steinbeck

Try ammo grab .com..I have found plenty including 22 mag
You must log in or register to reply here.

Field Testing Rifles: What journalists should be doing?
2

D
drbeech1968
I did a little housekeeping in my shop and found some .500 Jeffery ammo that I no longer need. Superior Ammunition and Hendershots loaded them, along with AHR (American Hunting Rifles). Several Woodleigh/A-Square solids along with lead bullets in both 535g and 600g. Message me for any details.
40 minutes ago •••
P
pam308 TOBY458 pam308 wrote on TOBY458's profile.
Just saw your listing for a winchester 70 458. Is it still for sale? I want it!!! pam308
Friday at 7:15 PM •••