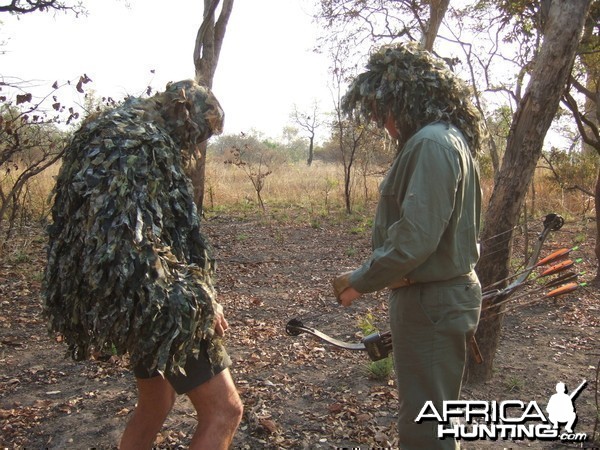 Today fewer and fewer people have the chance to experience nature in a participatory way. Hunting is one of these rare activities. As hunters, we see and feel the environment around us. Hunting is a particpatory interaction with the habitat and all its denizens - and if the hunt is concluded, we experience the eternal life-death cycle of nature. There are of course other groups of society and individuals, who enter into participatory relationships with nature and the environment. The general public usually does not enjoy this privilege. A visit to a game reserve or national park does not constitute participatory interaction, neither does the occasional reading in coffee table books or the watching of TV documentaries make a conservationist. Hunters, however, do not only acquire a broad knowledge of nature's ways, they usually also are practicing conservationists at least if they were worth their salt!

Hunting, especially trophy hunting, as it is commonly practiced today is coming under increasing public scrutiny. The public perception of the hunter and hunting is however very often rather unfavorable for the hunter. The conservationist side of the hunter is intentionally overlooked whilst unacceptable behavior of some so called hunters is depicted as the norm.

The acceptance of hunters in society and the recognition of our conservation efforts are closely interlinked with what is often called å¡—unting ethics and åair chase? This implies that the future of hunting depends on how society views and evaluates our actions! Society's evaluations are always based on an accumulation of individual acts by individual persons. It is therefore of substantial importance that the hunters as a group - and every single individual belonging to that group act within acceptable rules and guidelines. These rules and guidelines have evolved during hundreds and thousands of years and will require further evolution.

The most important principle of hunting must be the unquestionable sustainability of natural resource use, the second one that the hunters actions contribute significantly to the vibrancy of habitat and species. A third and undeniably important one the economics of hunting and its financial contribution to conservation is irrelevant in the context of this article. Commonsense dictates the applicability of the first two axioms for all hunters. The principles of fair chase and hunting ethics are the visible outflow of such commonsense approach!

Shooting a leopard or a lion over bait, killing a deer from a tree-stand, using a predator call to lure a jackal or a fox, shooting from a motor vehicle or with the aid of an artificial light source, bowhunting an antelope or deer with restricted access to a waterhole or feeding station from a high stand are these actions fair chase?

One might argue that bait will lure a large carnivore into a feeding pattern which will affect the instinctual behavior and defenses, giving the hunter an ç ¥nfair advantage. The tree stand or high stand gives the hunter also a significant advantage, but it does not affect the animal's behavior. Restricted access to a waterhole does just that! A predator call affects the animal's behavior, but considerable savvy and knowledge to use the instrument are critical requirements for the hunter. Chasing an animal from a motor vehicle does not require much hunting skills and additionally influences animal behavior, making observation more difficult for the non-hunting tourist. Shooting under artificial light certainly translates into ç ¥nfair advantage?

What then is Fair Chase? What are the so-called hunting ethics? A definition in absolute terms and fine details is cer- tainly difficult. Nevertheless fair chase is a critically important concept and for the individual hunter it must form a binding personal contract when in the field.

Some non-hunters suggest that Fair Chase should entail the same elements of chance and/or risk for the hunter and the hunted, others claim that Fair Chase is a contest in which each participant has the rightful claim to be treated fairly but whatever one may argue the fact remains that hunting past and present would be inherently unfair towards the animal in this context, due to the superior intelligence, methods and equipment of the human hunter.

Fair Chase cannot, therefore, be an equality of risk and chance. Neither is it an informed and consensual contest of the participants. We cannot escape the fact that human intelligence has made humanity dominant on this planet, that our desires and needs have changed the face of the earth and that we all use the resources of our environment for our communal and individual well-being. It stands to reason, therefore, that the use of natural resources through hunting is neither unfair nor immoral. However, all resource use must be sustainable - this is valid for all human activities and not only for hunting!

Although the objective of hunting today is very often selective trophy hunting, the meat of a hunted animal should never be wasted, since the origin of hunting comes from a life-death relationship as essence of food procurement. This causal thesis, that all food for the living comes from the death of something living, is all too often forgotten by urbanized citizens. The human hunter consciously enters into a predator-prey relationship with the hunted animal, because the experience of the hunt and this predator-prey relationship is important and valuable to the hunter. He accepts and cherishes this complex, interactive nature experience. It follows that fair chase reaches beyond the pursuit and killing of game.

Fair chase comprises an ethic that expresses the respect that the hunter accords to the hunted before, during and after the pursuit and/or kill. é‡˜efore entails assurance of the welfare of the game populations as well as the development of skills and attitudes. æ³¥uring involves all the circumstances of the actual hunt, and sometimes the taking (killing) of the quarry. é„fter encompasses how game is treated after death - including handling of the carcass, transport and consumption - and finally a discreet appreciation of the hunting experience in the telling of tales.

The hunters interactions with game animals and biodiversity gradually lead to an ever greater understanding of the community of life. This understanding and the respect of the human hunter for his prey is our main distinguishing factor from the non-human predator, and last not least from the majority of fellow humans, who never had a participatory nature experience.

Therefore hunters and non-hunters alike should understand æ“¢air Chase as a method of acting and as a normative set of formal and informal rules, which impose upon a hunter certain restraints. These restraints safeguard on one hand the conservation of biodiversity as common good for all, and on the other hand guarantee an enhancement of the individual hunting experience.

Formal rules (laws) are set by the authorities of the state; but formal rules tend to be made on the lowest common denominators. Usually they are not sufficient to guarantee neither the desired objectives of biodiversity conservation nor do they sufficiently contribute towards an acceptance or justification of hunting. Informal rules - i.e. promises or commitments each hunter or groups of hunters make towards game animals are therefore essential. Commonly these informal rules are described as hunting ethics, and fair chase is an integral part thereof. Whilst informal rules are always subordinate to formal rules, it is an undisputable fact that only the informal rules ultimately contribute to the enhancement of the hunting experience, to the achievement of personal excellence in the hunting fields and finally towards finding common ground with non-hunters.

Most é¼Žodes go far beyond formal rules. The individual hunter should even go beyond these informal codes. A reflective and disciplined hunter applies self-imposed limitations and more often than not, circumstantial handicaps. The more experienced a hunter becomes, the more he should exercise constraint. The shooting and killing of an animal ç´¡lthough integral part of hunting - will eventually come secondary to the experience. This is particularly important for the trophy hunter! A trophy must not degenerate into horns or skulls and entries into record books. A trophy is rather a token of remembrance of an individual experience in a particular situation with a unique animal. The éƒ½core of the trophy should be the least important factor! Trophies must also never be seen as a competition with fellow hunters! An experienced trophy hunter is highly selective and continuously strives for personal excellence in the hunting fields with the paramount consideration for conservation necessities and a deep love for nature.

The framework of formal, informal and individual rules21st century. Through them, hunting becomes an intense human/animal relationship. It achieves something good and valuable for the hunter and through its connection with conservation and economics also something good for society. It should have become clear to the reader by now that Fair Chase and Hunting Ethics are individualistic behaviour patterns; they are usually not written into law, nor can contravention be always prosecuted. When the hunter is alone in the field only he will be the judge of his actions. Therefore self control and self discipline should be noteworthy attributes of a hunter, just as essential as peer pressure from hunting associations and those individuals who are well advanced on their way to hunting excellence!

So would you take a shot at a leopard under artificial light conditions over bait? Would you release an arrow at an impala which had to pick its way along guiding walls of thorn bush to get that evening drink of water? Would you pull the trigger on that 44 inch gemsbuck, which had been bought on an auction and was just released on a game farm?

Ethics and Fair Chase cannot be prescribed - you have to judge yourself, whether you are able to look at the trophy on the wall and relive the experience of an exciting hunt or just see it as an addition to a collection. Despite of the difficulty of describing the concepts, fair chase and hunting ethics retain a deep meaning for the hunters in what they imply. 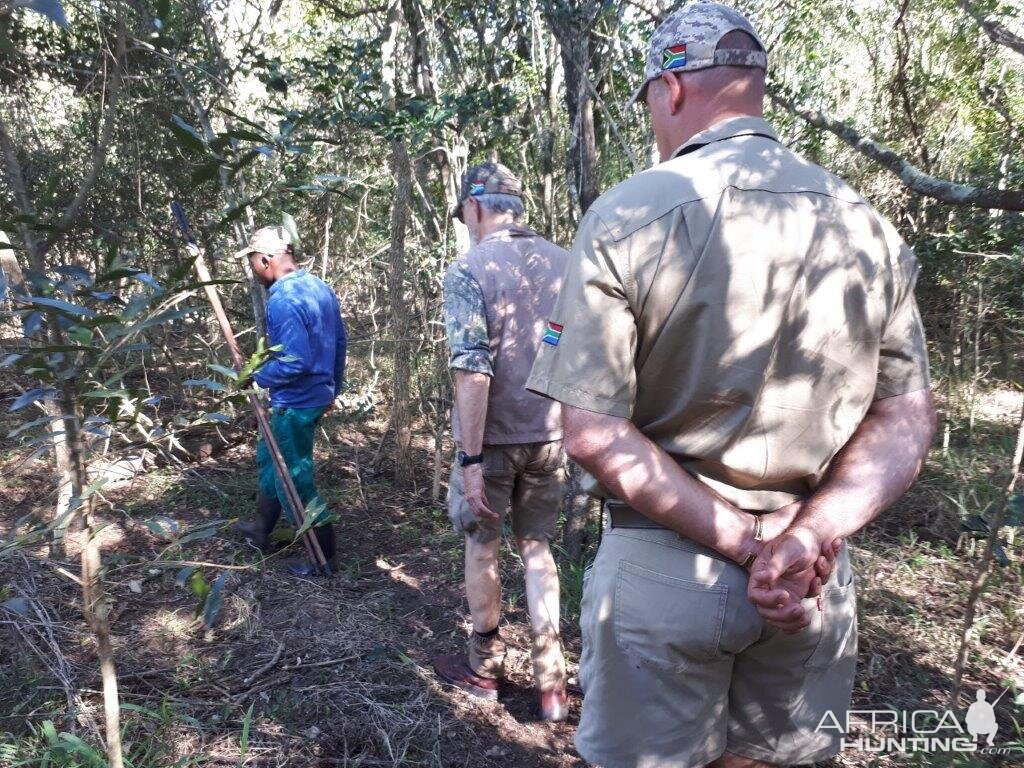 The Fair Chase Guild – What Is It?