One Picture, One Story

The lunar landscape in front of us told the story. We'd just driven the bakkie slowly, gently across a rock strewn plain for the past 90 minutes. The old Hi-Lux truly embodied the phrase "it's not the age...it's the miles". With over 650,000 km on the clock, the Hi-Lux Raider lived up to its name and we raided into an unknown land. That truck was part of my first safari in 2012...my second in 2014...and now we bounced, creaked and groaned our way across this arid moonscape. Red dust bloomed, driven by brutal gusts of wind that cut through three layers of clothes.

It had already been a long day, starting at 5am. Sorta. It was dark when we loaded the truck and somehow I'd managed to stumble backwards. Into a water pipe joint. Breaking it, of course...where it spewed it's endless contents without control and at full pressure directly into the open front door of the Raider. For a solid 15-20 seconds.

Craig thanked me for my generous nature, cleaning the interior of the truck out for the first time in the better part of six years. Wandeelay, my one-eyed tracker, took the towel I'd fished from my room and began to dry out the interior. Even in the dark, that one-eyed man had better vision than my 50 year old laser etched 20-15 vision gave me.

This was to be an interesting hunt. I'd hunted the lands of Leopard's Valley twice before and I'd hunted the lands surrounding as well. I love this place...but we weren't hunting here. I'd thrown the dice, asking Craig Done (my PH) to find something different. A few shortened conversations had us chanting Vaal.

Did I have any idea what I was really asking for?

A dustdevil spun up in front of us, whipping the red dirt into a frenzy. The ball joints of the Raider creaked. How Wandeelay managed to hang onto the bakkie rails...wait, he was sitting in the back seat. Smart man that one.

A herd of Black Wildebeest scampered off, 600+ yards away they were. We passed a small mound of obviously man set rocks...passed more rocks on the ground...passed more dirt...passed more...well, crap. It was a lunar landscape. Armstrong never passed here...lucky bastard.

Ahead of us lay three fingers...valleys they were. We could watch the wind gust and whip up the dirt, rocking through the canyons. We ate lunch in the truck, pointing at the valleys, the foothills, the mountain tops...fingers tracing the imaginary topo lines ahead of us, outlining the path we would take. This...This...

Was going to suck.

I'm no stranger to high mountains. I spent my juniorhood backpacking the Sierra's and not that far back I enjoyed (yes, enjoyed) a goat hunt in Alaska. The 9 1/4" Goat holds its head high in my trophy room. I turned 50 but there's still some fight left to go. Heck, how much harder was this going to be than Chukkar hunting anyway?

We started up the hills, paused a few times...started glassing. The second PH at Leopards Valley - Ryan...or was it Jim? Wait, Ryan. No, ehhh. Ok, so That Guy made some prophetic words. "They start running when you open your door in the morning". Damned if we didn't see a set of duff gray tails disappearing over the horizon. We leaned back, buttoned up, breathed deep as the Klipspringer watched and laughed.

And laughed some more and the unusual bi-peds staggering their ways along. What were those pointy sticks and shiny things they were carrying anyhows?

A quick plan was discussed. Vaal could wait a minute. Or three. They were perhaps 400 yards out - in the wind too far to really take a shot with an unfamiliar rifle and questionable ammo. But that's another story. We'd put a stalk on the Klippy's - there were three of them, two males and a female. Besides, they were in the direction we wanted to go. See, we'd take the gully in front of us, walk up it a ways until we were out of sight, come up out of sight of the Klippy's and skirt the mountain, low and slow like.

The lead male played down on his rock, looking straight at us while the younger two scampered around, chasing each other.

See, we were smarter though. We was hunting. We dropped down out of sight and out of the wind, scrabbling up and down the deep was. Craig said something to Wendy (*I swear, that's how it always sounded to my American ears) and Wendy stopped to reach down a particularly vertical 3 foot (meter) high shelf to help me up. I handed the borrowed Mauser up to Wendy and scrabbled up...my knees and vertigo starting to talk to me. See, goat hunt in Alaska or not, I still don't like exposed heights.

Come to think of it, I didn't get the rifle back until after we started the final stalk. I wonder how that happened?

Hand over hand, my knees dragging up the wash, we skipped up the mountain, out of sight of the Klippy's, working slowly and quietly. A hundred or two hundred yards later, Wendy helped me up the last shelf and handed me back the rifle. I smiled and took it - yeah, I'm not too proud. Wendy is a lovely man.

Hushed voices, we talked about our final stalk. We were still out of sight, low and slow. Inch by inch we crawled. We crawled shielded behind this short two foot shelf...my knees were barking. Above us, somewhere the Klippy's ...

And he was still sitting on his throne. With two others dancing around. Watching us.

Seriously. Watching us. Laughing I'm sure.

Craig pushed his camelbak forward as a rest and I tried, I tried to get comfortable. The angle wasn't right. I shifted, no good. Handed the rifle back to Craig, moved, reset, tried again. No go. Shift another 5 feet forward, the prone should be better there, no go.

Somewhere above us, the Klippy stood up, cocked its head, spun around two or three times slowly and settled back down, staring straight at us. The others danced around.

I don't know how long we screwed around trying to set up but by the end of it we more acting an episode of the Keystone Cops than hunting. I had a front rest set up with a braced tripod, another set of sticks just forward of the trigger guard, wedged into place with my left hand, rifle in my shoulder and heavily leaning forward. We'd spend 20 minutes now, maybe more, setting up. It also gave us plenty of time to study the Klippy's. The old guy rested on his throne, one horn busted short.

Take Him. Whispered Craig. Little point whispering at 200 yards in the wind. We'd made so much noise...heck, we weren't even bothering to crouch anymore.

The Klippy just kept watching us...I think he yawned...or maybe got cold on the rock. He stood up and stretched...my rest was rock stable as I sent the first round straight over his back. I'd love to give some kind of excuse...I mean, it was a borrowed rifle (a 40 year old Musgrave Mauser) with questionable ammo (it sure felt soft on the recoil and loaded light) and the wind WAS doing a proper thing.

He just looked at us. He KEPT looking us. He just...STOOD there.

The second shot was on target and I watched the Klippy give a short sprint before collapsing and rolling down the hill. 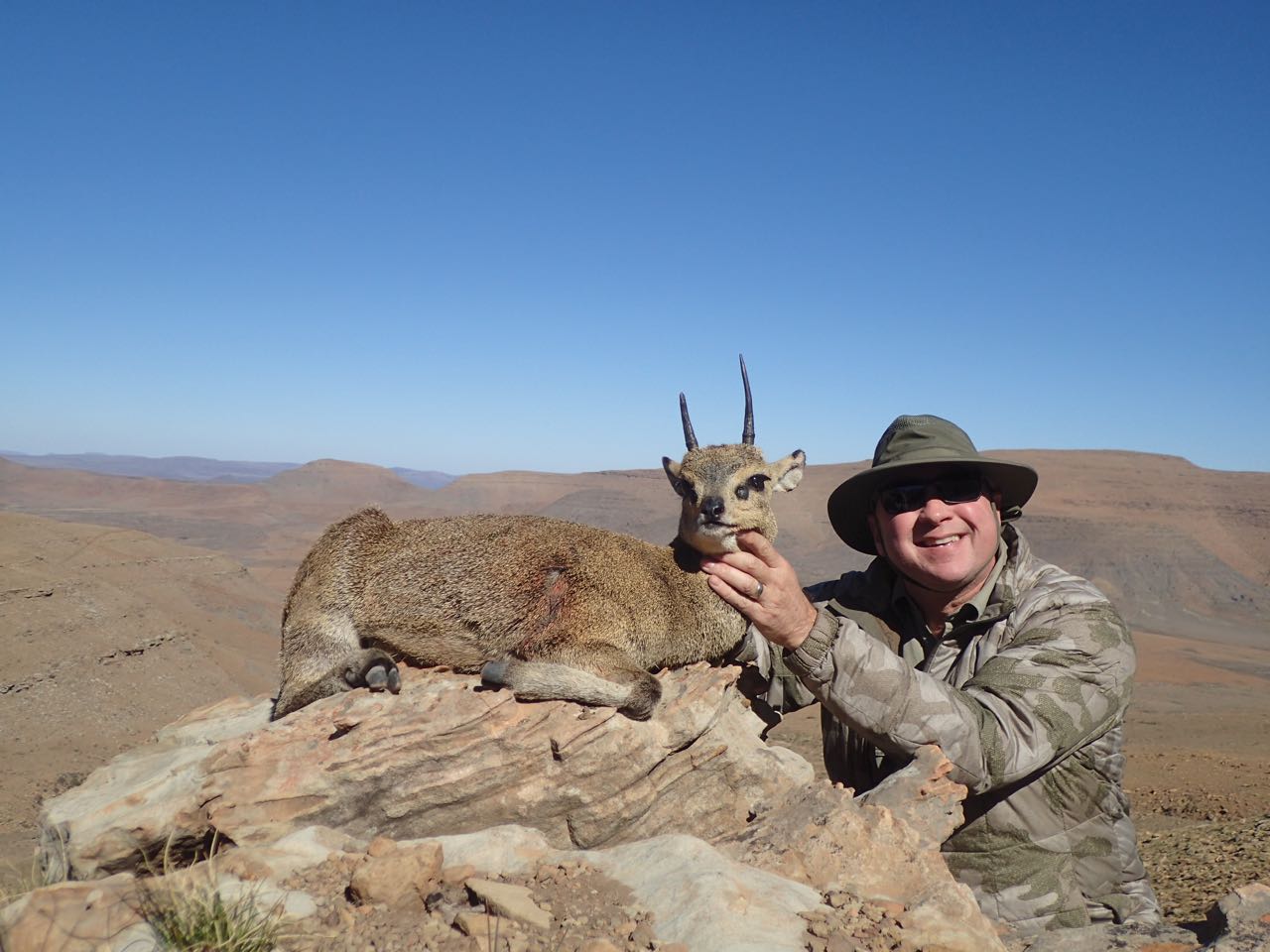 Sometimes, the hunt isn't what you expected. Sometimes you just accept what Mother Africa has to offer.

The Vaal? Ahhh...that's another story.

PS: That pipe with the ice-cold morning water flowing its veins...was counter sunk and double safety wired shut. One of Dave's ranch hands asked "How DID he manage to break that"?


PPS: this thread is created for ANYONE and EVERYONE to post. One Picture, One Story. Those are the only rules!
Last edited by a moderator: Aug 20, 2019
- Robert N.

Great hunting episode! Thank you for writing it down for us. I think no hunt is complete without some high jinks. It isn’t a true adventure if everything goes according to plan.

Great hunting story.
You must log in or register to reply here.

The Story of Tag 1

The Death of a Dream; One Zimbabwean Farmer's Story