One Man's Meat... The Capture of a Poacher

One Man's Meat... The Capture of a Poacher
by Jamila Najmuddin 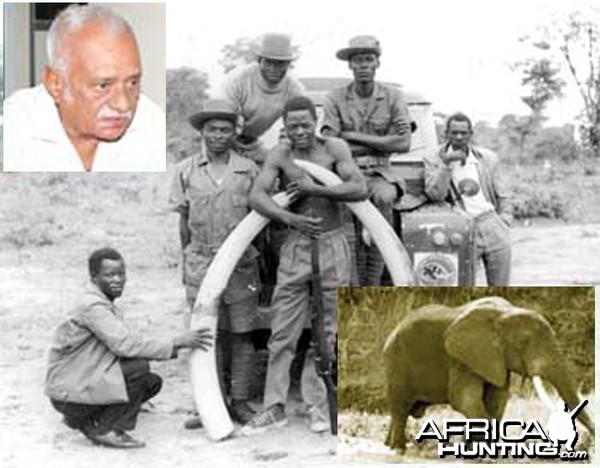 When 77 year old Gamini De Silva stepped on Sri Lankan soil 31 years ago, little did he realise that his hunting career had reached an end.

Hunting since his teens in the wild African jungles, De Silva was one of the best known hunters and game rangers in the business and his talents soon spread far andwide across Zambia where he lived during most of his younger years.

The news of the arrest spread all over Zambia and De Silva was presented an award for his feat by the Zambian Wild Life Department .

However, other than hunting and being one of the best game rangers of his time, Gamini De Silva also has another interesting story - his culinary skills in cooking elephant meat.

While De Silva spent most of his days in the forests searching for poachers in Zambia, he had a team of more than 60 people, all of whom were fed on elephant meat.

"Although people wonder how I can eat the meat of an elephant, it is very tasty. If people can eat beef, chicken and all other meats, I see no wrong in eating elephant meat," De Silva said.

When De Silva first arrived in Zambia he learnt that the Zambians were lovers of game meat. But little did he dream that one day he too would be feasting on the meat of a hunted elephant - something he had never thought of doing. "Like any other Sri Lankan, I too never dreamt of eating elephant meat. The very thought made me feel very sick in the stomach. The first time I tasted it, it made me feel dizzy but I soon acquired a taste for it because it tasted very good," he said.

He adds that working in a country like Zambia, in a forest with over 60 people, killing an elephant to feed on was the ideal thing as the meat lasted for over two days.

Unlike other animals, elephant meat was loved by all, especially when it was cooked in special sauces and spices, De Silva said.

"All I do is boil the meat and then cook it with Jamaican coconut cream. When cooked with the appropriate spices, elephant meat curry is one of the tastiest curries anyone could ever taste," he added.

While the hard flesh of the elephant is eaten by the rest of his men, De Silva says that his favourite was the elephant trunk as that was the softest.

"Trunk meat lasts me for about two days and I love that part of the elephant as it is the softest and its like a tube. Trunk meat is also the tastiest when compared to the meat in the rest of the elephant's body," De Silva said.

While De Silva has never tasted elephant meat since his arrival in Sri Lanka, he says that he would love to feast on the meat once again if given the opportunity.

De Silva also adds, "I am glad that Sri Lankans have never tasted elephant meat because once they get a taste of it, elephants will soon be extinct in this country."


The Capture of a Poacher

Gamini De Silva's recalls his capture of Zambia's most famous poacher of all time - Cyrus Kalunga:

The Kasanka game reserve, situated in the central province of the Serenje District, covers an area of about 350 sq. miles. This area is well known for its poaching activities, since it is very close to Congo. Poachers from either side cross over for this purpose.

Once the area came under my control, I made it a point to explain to the villagers the value of game, and the revenue the government could earn by way of controlled hunting through game licences. Once this message was conveyed across to the villagers, I lost no time in meeting the village headman and the chief of the area, where I explained my plans.

I also spelt to the guards that something must be done soon, to stop slaughtering animals by poachers. I also sounded the guards to air their views and one of the senior guards briefed me that slaughtering was mostly done by none other than Cyrus Kalunga.

For a few months everything was very quiet, and on a subsequent visit to the game reserve, a number of villagers informed me that elephants had raided their shambas and required immediate assistance. One of the men who visited me in this connection was none other than Cyrus Kalunga himself, in the company of others.

Cyrus Kalunga said he would help me to track down the animals which caused harm to the villagers, but he wanted me to provide him with a rifle, so that both could hunt together. This was something I expected, but had to say a firm "no" as Cyrus was a person who could not watch another shooting an elephant, when he was such a good shot.

Although I had met Cyrus many a time, I could not get a clue as to his activities although it was evident how well he knew the reserve. Many months passed and Cyrus was missing from the village. Information was received at a local beer party from one of his girl friends that he had gone to Congo to purchase a rifle. I put several of the guards to cover his village, but no one dared to say a word about Cyrus.

Cyrus usually came out on his poaching trips late in the night during which he had killed eight elephants and 16 buffaloas, including a number of bucks.

One night Cyrus was caught while he was resting. He was handcuffed, but before he went to sleep he requested to be chained so that we could all sleep in peace. In the morning, the boys had to cover him with their rifles for his morning wash. Cyrus told me that his days were numbered, and all his poaching activities had come to an end.

Along with his 0.303 rifles and ivory poached, Cyrus was produced before a Zambian court in the mid '70s where he pleaded guilty.

Cyrus was fined 40 pounds and was enrolled to the Game Department in Zambia as a elephant control guard.
Last edited by a moderator: Dec 1, 2016
Jerome Philippe, Founder of AfricaHunting.com

Thanks Jerome for the write up , its a win of good over evil..

The Indian one horn Rhino too is running through this gauntlet of poaching for horns.

Assam’s Kaziranga National Park has been a remarkable success story of conservation of the one-horned Indian rhinoceros and the wildlife in north-east India. But the rising instances of poaching of rhinos has left officials baffled. At least 20 one-horned rhinos have been killed in 2007 till date. It was four to eight each year in number between 1998 and 2006. "This is a very serious issue. This is not the first time that two rhinos have been killed in three days. In March, six rhinos were killed in a span of 30 days. This is first time after 1998 when over 10 rhinos have been killed in Kaziranga. This year poachers have killed 20 rhinos," said Bibhab Talukdar, a wildlife activist. With the increase in rhino population in Kaziranga, their habitat space within the park is shrinking. Experts believe that the rhino horns, which are purported to have aphrodisiac properties, are smuggled to China and also sold in other Asian markets. Buyers from the Middle East also use the horns to make ornamental dagger handles. Estimates suggest rhino horns can sell for up to 35,000 dollars a kilogram. Meanwhile, the forest department of Assam has requested the Wild Life Institute of India to study the exact reason behind rhinos leaving the park and moving out.

Very sad to see this indiscriminate killing of these gentle giants..

A poaching gang has been arrested after the shooting of a large male elephant in the forests of Kerala in India. Wildlife authorities received a tip off after one of the gang was admitted to hospital with serious burns after an accident with some gunpowder , as they shoot these giants with country made muzzleloader guns.

India is fighting hard to curb down the poaching of Indian Elephant , but its still unbridled .....

One Man's Meat... The Capture of a Poacher

The "Hairy", the Buffalo & the Hippo

The "Hairy", the Buffalo & the Hippo - Tanzania