With the recent 2020 SCI-sponsored, Calgary International Hunting Expo and with my son and I leaving for two weeks of hunting in South Africa in two days time, hunting in Africa is foremost on my mind. Before the new adventures begin, however, I thought it would be prudent to look back on previous hunts and provide a report on Etosha View Hunting; not only that no other review that I'm aware of exist in the Forum; but, also that I hunted there in 2018 and 2019, with two different experiences.

Etosha View Hunting is a family owned business and farm of approximately 10,000 hectare area, located 470 km north of Windhoek and on the southern border of Etosha National Park
http://www.etoshaviewhunting.com/index.php/en/

In April of 2018, I did some community volunteer work in Zambia and being an avid hunter, thought while in Africa I would do some follow-up hunting. It was quite opportune that there was the January 2018 Calgary Africa Show so I was able to get information (N.B. - I talked to every outfit at the show so the amount of safari outfit, country choices and pricing was a bit overwhelming). It was clear though in my mind that my priority species were Kudu, Oryx, Impala and Springbok. I landed on for my first African Hunting experience with Etosha View Hunting (EVH), for several reasons: 1) they have a high potential for high quality trophies for the target animals; 2) large land area near a National Park so the potential for free-range, walk-and-stalk hunting experience; 3) very positive testimonial from a non-owner, agent at the Africa Show (Clinton Barrett); and, 4) EVH are custodians of a herd of over 15 black rhinoceros so there was a real possibility of seeing these iconic, charismatic megafauna!

I arrived at EVH on April 28, 2018 after being picked up at Windhoek. It was cool to finally see a number of animals along the highway/road in the night drive as the area around Zambia were I recently at was at was devoid of large game and the locals were even eating the Meerkats! After sleeping in, one of the PH's brother took me on a tour of the land and came across a tower of giraffe, several bird species, sounders of warthogs, and a herd of springbok in which there were a few nice animals. Fortuitously, there was a 30-06 and ammo in the vehicle and after hopping out and making a 150 yd shot, I was able to secure my first ever African trophy. Later it was off to the range with the 300 Win Mag provided by EVH and ready to take on Kudu. EVH is renown as an amazing Kudu spot with greater than 55" animals quite likely. Unfortunately, the area was hard hit by rabies in the previous two years and the Kudu population had plummeted; but, with enough good animals around, albeit more effort to harvest. 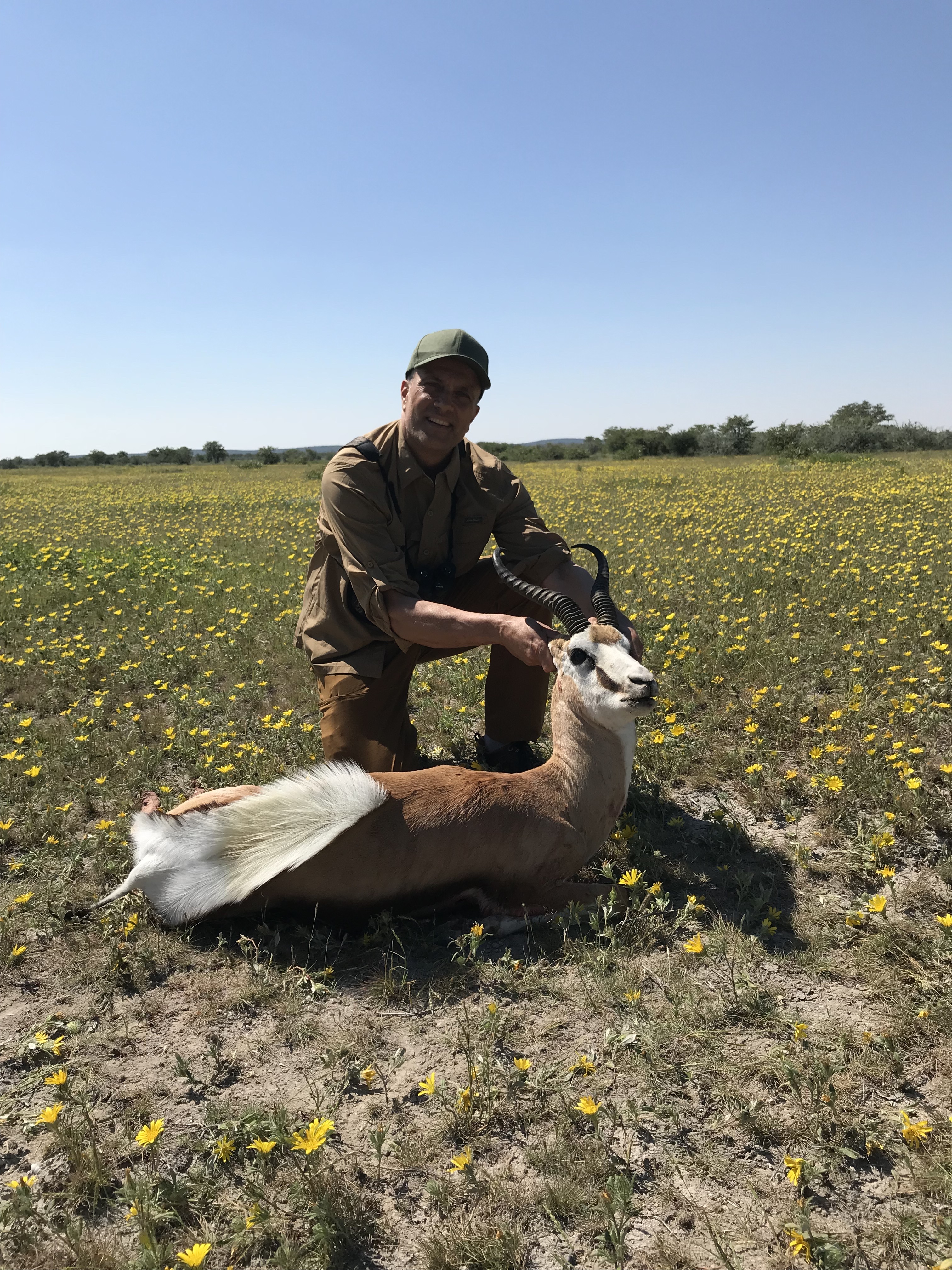 The whole Farm area is stunning with hills to drive up and scout from towards the plains (bushveld and open meadow) below. The vegetation has such a strong aromatic smell that is so unlike anything in Canada and the area was fortunate to experience good rainfall, so was greened up and meadows covered with yellow flowers. I stayed at the hunting lodge located a few kms from the main lodge, that has a nearby water hole and solar light mounted to view animals at night. Black wildebeest, Springbok, Hyena, Guinea fowl, a female Ostrich (which was quite tame) and jackals came close to the lodge. I chose to sleep out on the hunting lodge balcony one night to catch a view of the night sky - absolutely amazing. 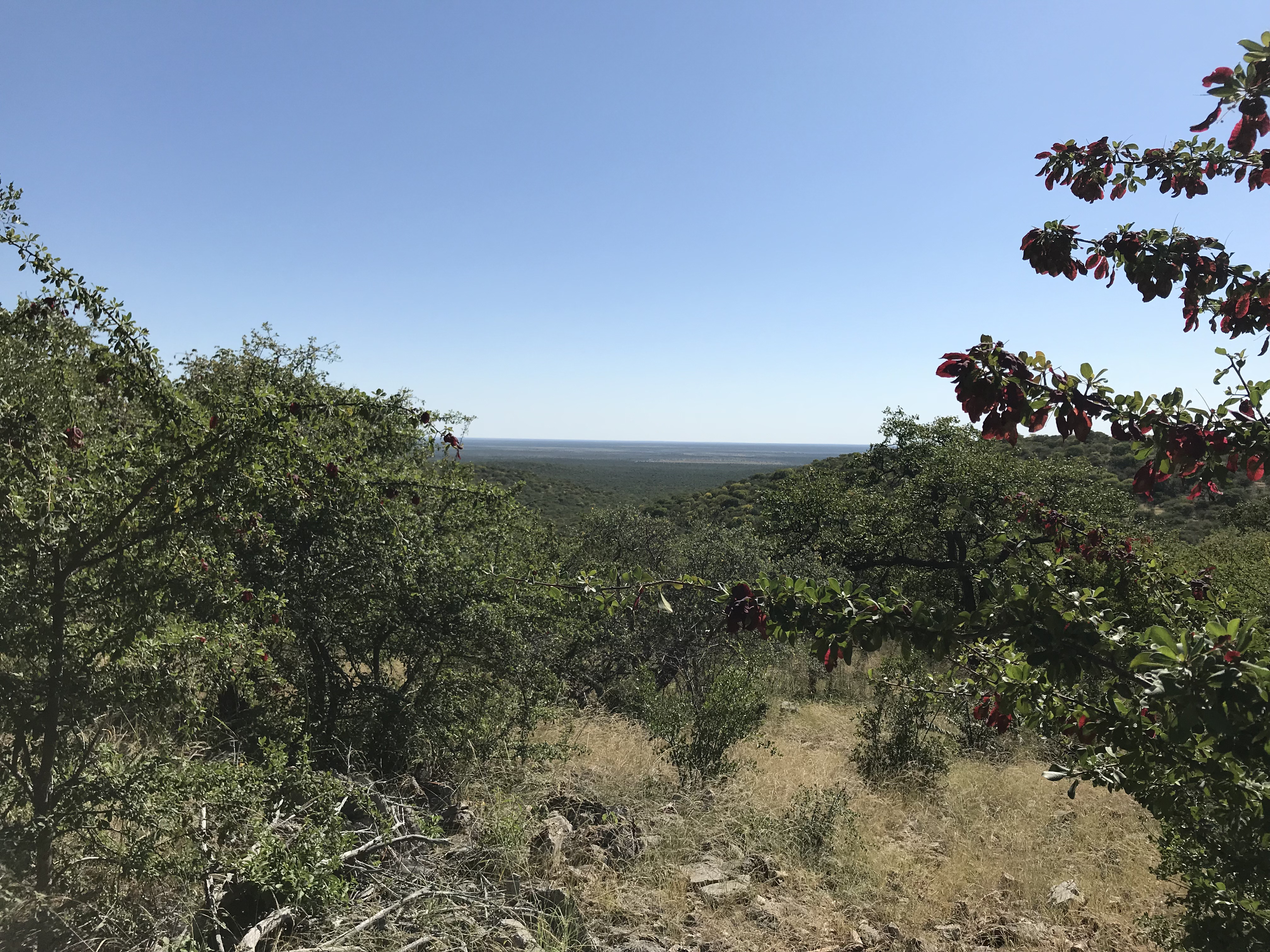 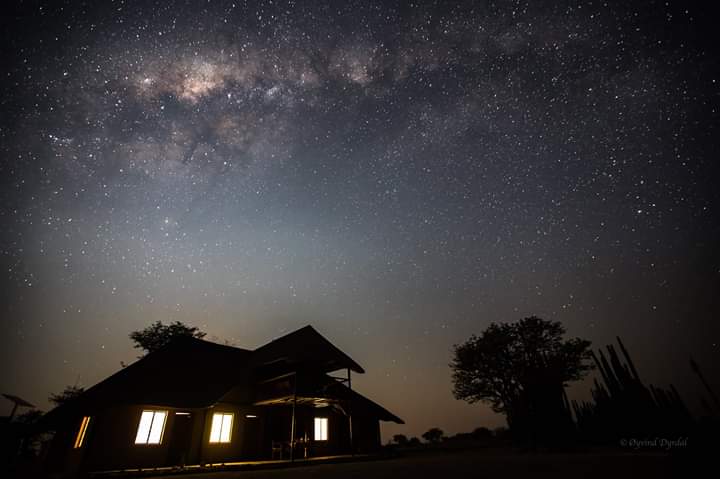 While scouting for kudu, saw a group of oryx and a long stalk was on. After a cat-and-mouse game of about 30 minutes including a group of three juvenile animals passing by us at 5 m, a 125 yd was made to secure a 36.5 inch Oryx cow. All-in-all a good first day! 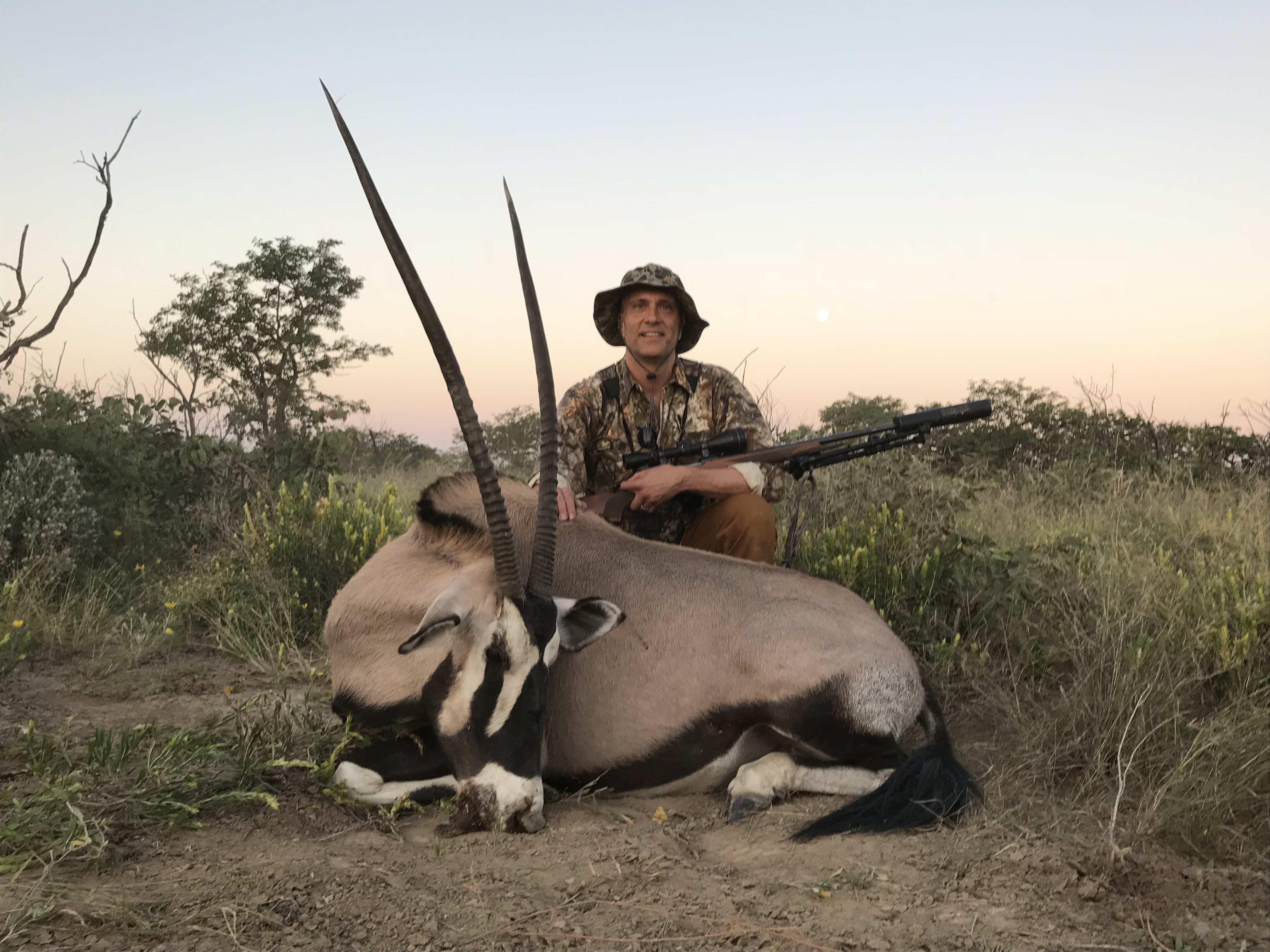 Spotted a couple Kudu and one over 57 inches over the next couple days and saw several Hartmann's (mountain) zebra in the hills, but lucked into a 58 inch Kudu while driving on the third day so the stalk was short. Number two Kudu on the fourth day was a long stalk including back down and around a hill as the wind changed direction and a shot from a cliff face made at a steep angle downward (the PH held the sticks and the tracker me, so didn't pitch forward off the face). The Kudu was single-lunged so went the distance (about 3 km) before a second shot brought it down. The San (Bushman) tracker was amazing to be able to follow the animal and with limited blood, but the dogs were brought in as well since the Kudu joined up with other animals which had split off. 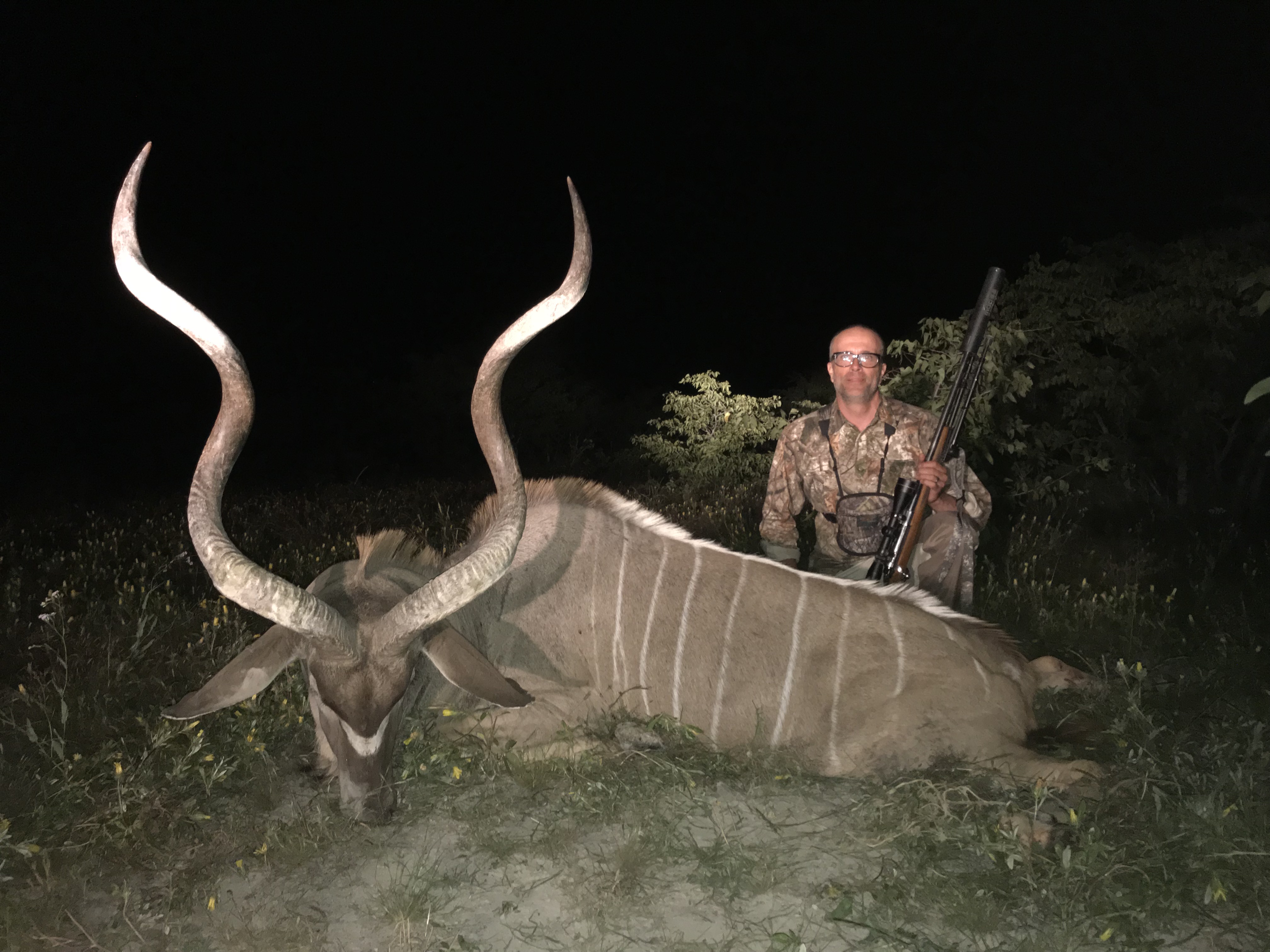 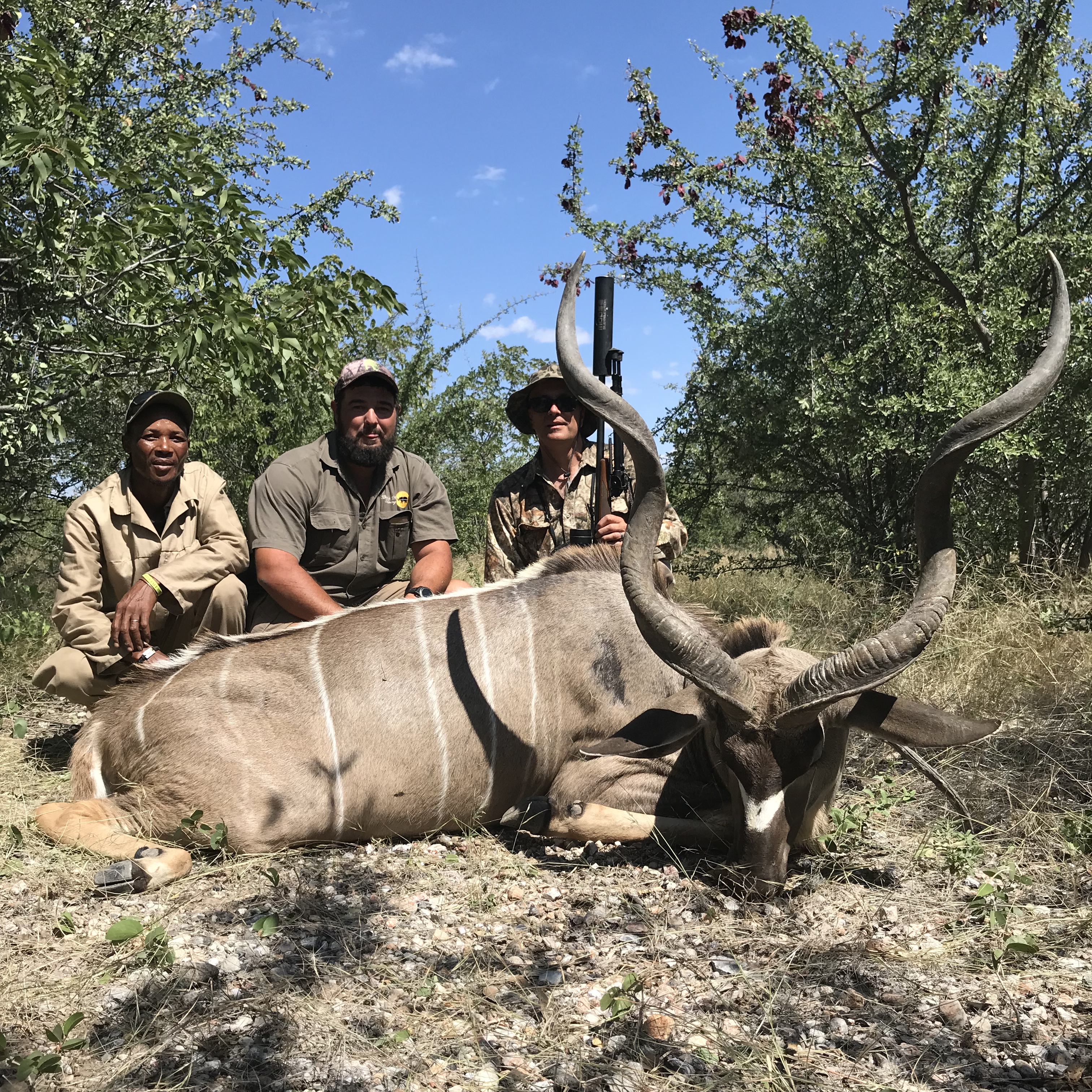 Over the next few days picked up a Black-faced impala at a concession 2 hours away and a Red hartebeest at the Farm. 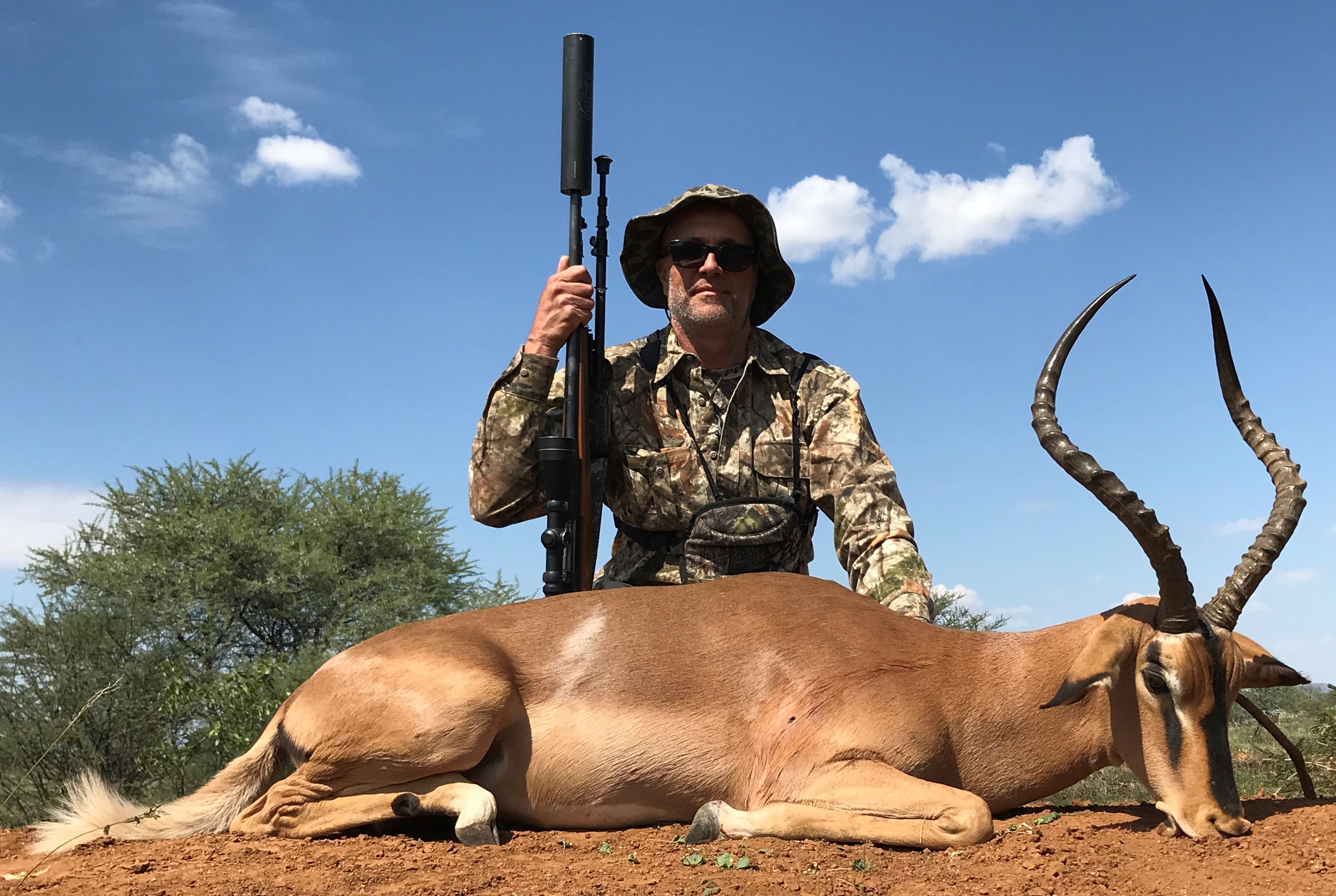 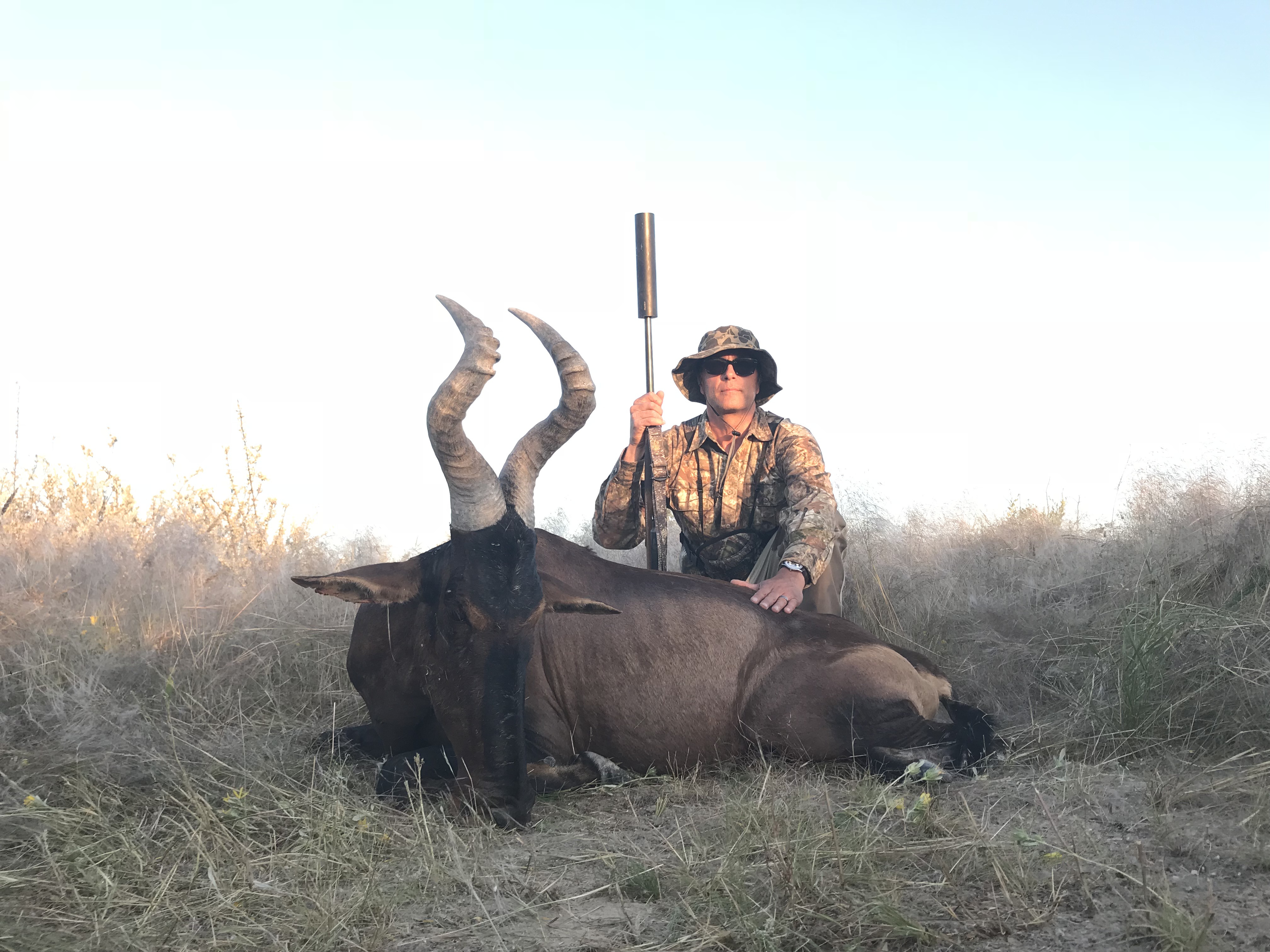 Was able to able to shoot bait springbok (for a leopard stand for a client arriving later) and saw the leopard run by at about 100 m from me (I thought it was a cheetah until it ran past me). There were several Jackal (but couldn't get the rifle in time) and saw four different Rhino, including being charged by a younger bull while in the vehicle. 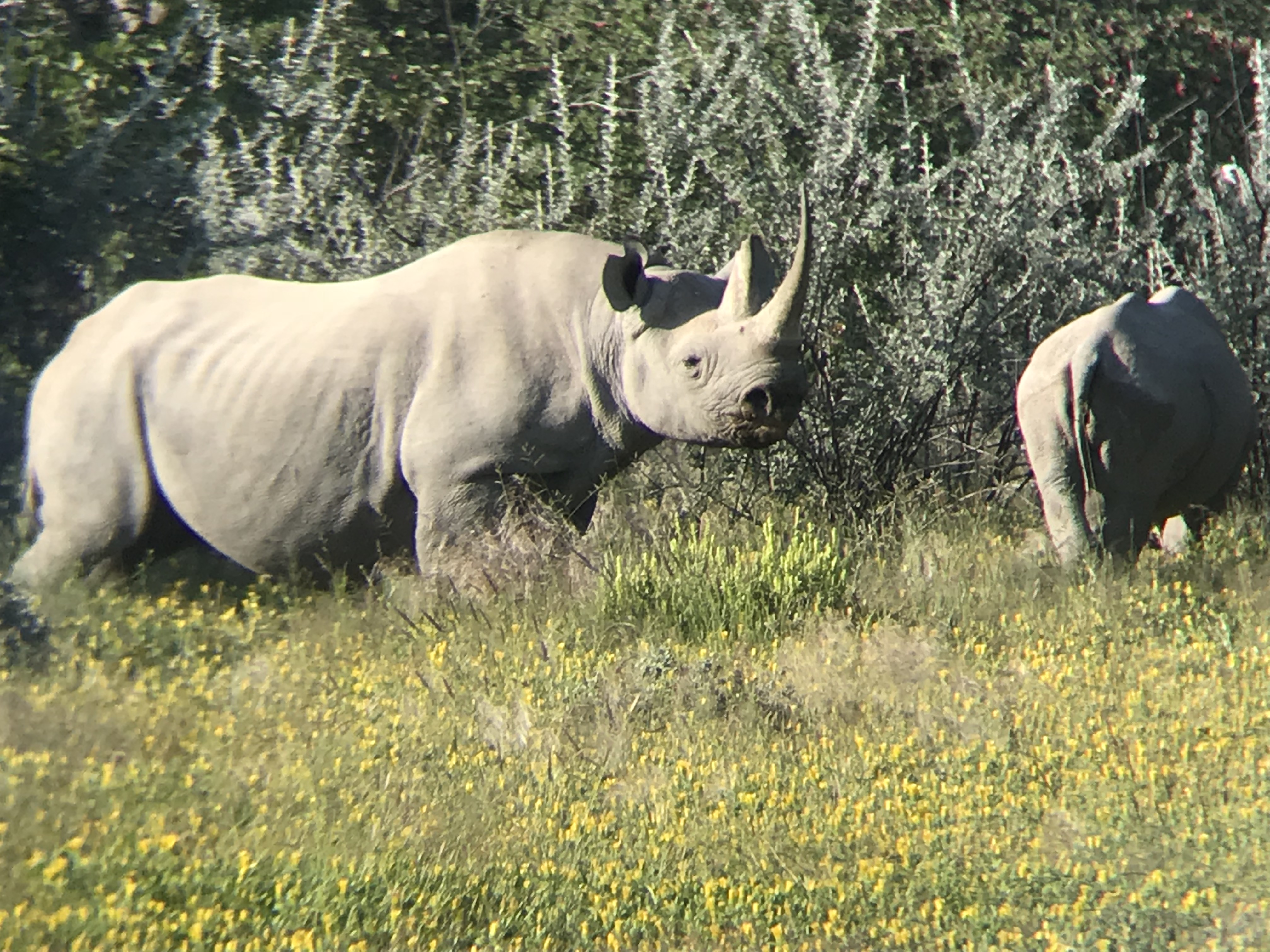 The accommodations were quite comfortable and the food fantastic. It was great to be able to eat the game that was shot before by me and the other hunters that joined me on Day 5, as well as be with the PH and his family for the evening dinner. My favourite is impala followed by oryx. The pumpkin fritters are reason enough to go to EVH alone!

All-in-all, harvested 9 animals, three of them cull (management) and of the 6 trophies, 5 were Roland Ward/SCI gold medal. The African bug had hit hard and could not wait to return!

I returned with my wife in July 2019, following community work (drilling a borehole) in Zambia, Garden Route drive from Cape Town in RSA, shark cage diving in Mossel Bay, hunting in RSA for Nyala, Warthog and Mountain reedbuck; and, then a drive from Victoria Falls, through Botswana (including Chobe safari and some tiger fishing) and onward to EVH after passing through the Zambezi (Caprivi) District.

Northern-Namibia in 2019 had experienced a severe drought and EVH was no exception. I had primed my wife, telling her about the amazing smell and lushness; but the farm was quite frankly a dust bowl which saddened me greatly. Nevertheless, there were quite a number of Giraffe, Oryx, Black rhinos and Eland around. The Zebra, Springbok and Kudu were in the hills but I was after a Bull Oryx which I harvested a gold medal animal. 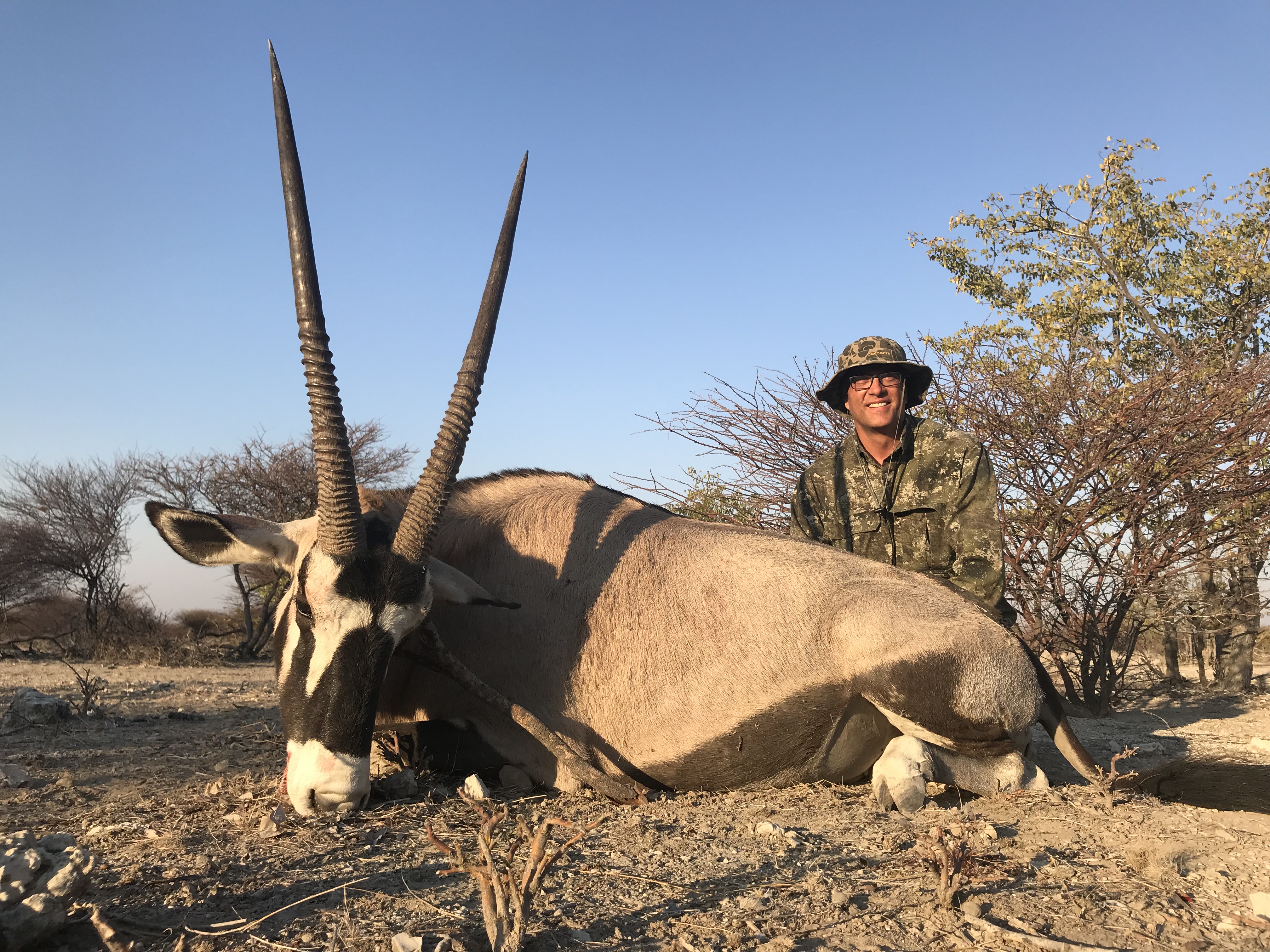 Over the 3 days hunting, also went bird hunting and shot a few Guinea fowl and Sand grouse; the latter in a quick burst at a waterhole just before dark. In this trip and the previous, have seen 7 of the Black rhino and had two very close encounters - one with a massive bull (which we threw rocks at behind the bush to move off) and a more nervous encounter with a cow and her calf |(thank goodness she didn't detect us)!

In spite of all the dust, it was a very enjoyable experience again. My wife was also able to spend the day at Etosha National Park and tour a Himba village with Burger Sr. as the guide. Finished the trip with a drive to the Skeleton Coast with Burger Jr. the PH, for some shark and coastal surf fishing. I can't say enough how much I (and my wife) have enjoyed EVH and how good of an experience both trips were.

The "straight-goods" synopsis:
For a truly African experience for amazing animal viewing and overall hunting quality for the price, I can't recommend Etosha View Hunting enough!
Last edited by a moderator: Mar 7, 2020

Thanks for the hunting report. It looks and sounds like you had a marvelous time and got several nice trophies.

Great report and I love the old Oryx bull. I would not have passed on him either. Thanks for posting.

Thanks for sharing your hunts.
The rain makes such a huge difference, it is truly amazing.
Congratulations on some nice trophies.

Good luck on the next adventure.

Excellent! Great info and trophies! Best of luck on round three!
Africa on my mind.

Very nice. Love Namibia. Great destination.
Tommorow is promised to no one. Go live your dreams.

Thank you for the report on your trips!
You must log in or register to reply here.

M
matt vejar kevin masters matt vejar wrote on kevin masters's profile.
Kevin,
Played rookie league for the Yankees in Paintsville after winning the College World Series at Fullerton State, in1979. All I could think about was the movie “Deliverance”- lived up in a hollow with some other players. Refused to go on a moonshine run because it was a dry county-no way. Met some of the nicest people on the planet there! Van Lear the home of Loretta Lynn was highlight of summer LOL.
Yesterday at 9:46 PM •••