I have been looking into finally getting a pair of range finding binoculars, as I have been thinking that they would make an excellent gear addition to an African adventure. When I first started hunting, and had next to no money, I went without binoculars. Then, I bought myself a cheap pair, which fogged, and had a terrible sight picture. Then, I upgraded to a better quality set of Bushnell 10x42's, which worked fine, and I went on my first Namibian trip with them, as well as the hunting that I participate in here at home throughout the year. What my experience in Namibia, and here in Ontario as well, has taught me is that I am a terrible judge of distance. I cannot reliably determine how far away an animal is with my naked eye, and am not fond of missing, or worse, injuring any animal on account of my shortcomings.
So, I began the process of finding something to suit my needs. I have a blue-collar job, so honestly, the big 3 (Swarovski, Leica, Zeiss) just weren't in the cards for me. I know, "Buy once, cry once", but with a mortgage still hanging around my neck, I just couldn't run with those big boys. I am still saving for my next African trip, so every single fun-dollar has to be accounted for.
I tried some Nikon's, which were OK. I tried the SIG laser range finders, but something just wasn't right (they almost felt "cheap" to me). I looked at the Vortex Fury's, but the picture was just terrible to my eyes, everything looked like it had a blue filter on it.
Then, I took a chance on the Meopta's - Meopta Meopro Optika LR 10x42 HD - to be exact. These I had shipped to me from the States, as the retailer was having a Founder's Day sale which dropped the price even more. I could have ordered them from a retailer in western Canada, but at over $800 more, I just couldn't. 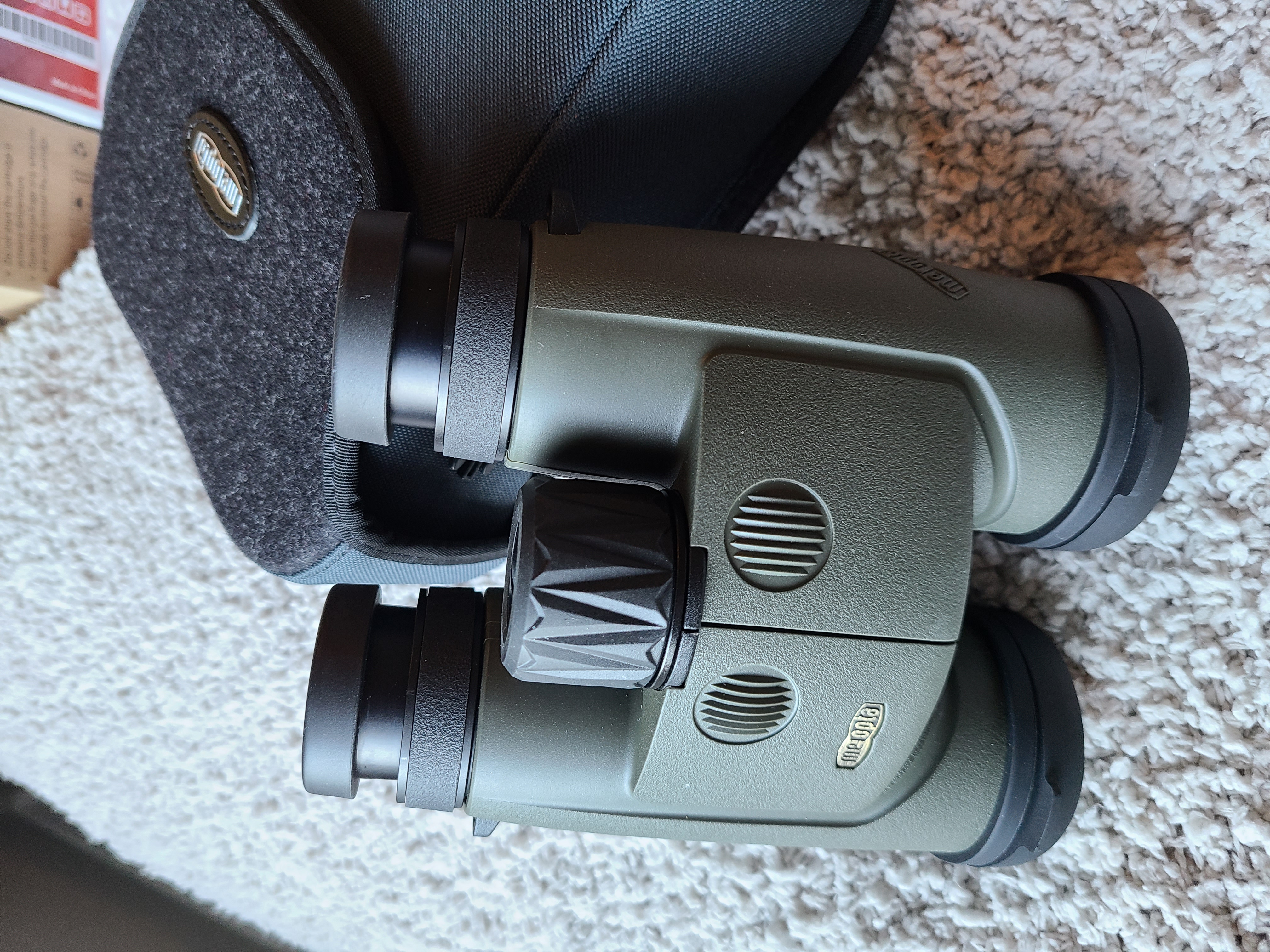 I wanted optical quality first and foremost, and believe I got it in these Meopta's. The image is crisp and clear to my eye.
I wanted durable - these have a magnesium body, wrapped in a sort of rubber-like armour coating. Feels good in the hands, not too heavy, 32 ounces I believe, and not too big at just over 6" tall and 5 1/2" wide.
As for the range finding feature, I think it does a good job. Two buttons, one to turn it on, the other to range. It does meters or yards, with a max of 2600 yards (2380m) according to the website. I honestly can't see myself ranging that far in the field, I don't like shooting past 300m, but now that I know how far the target is..........
It will cycle through three modes, Auto, Hunting and Golf, and will compensate for angle of elevation as well. There is no on board computer that links up to your scope, or an App like some of the high end units can. Again, I had to draw a financial line in the sand, and honestly, I don't think I would use that feature right now anyway.
I have not hunted with these binos yet, but have ranged cattle and horses out to over 1200m with no problems. I have ranged fast moving dogs at the dog park, and the unit keeps up to them quite well. The focus wheel feels really good as well, with just enough resistance to feel like it has some quality. 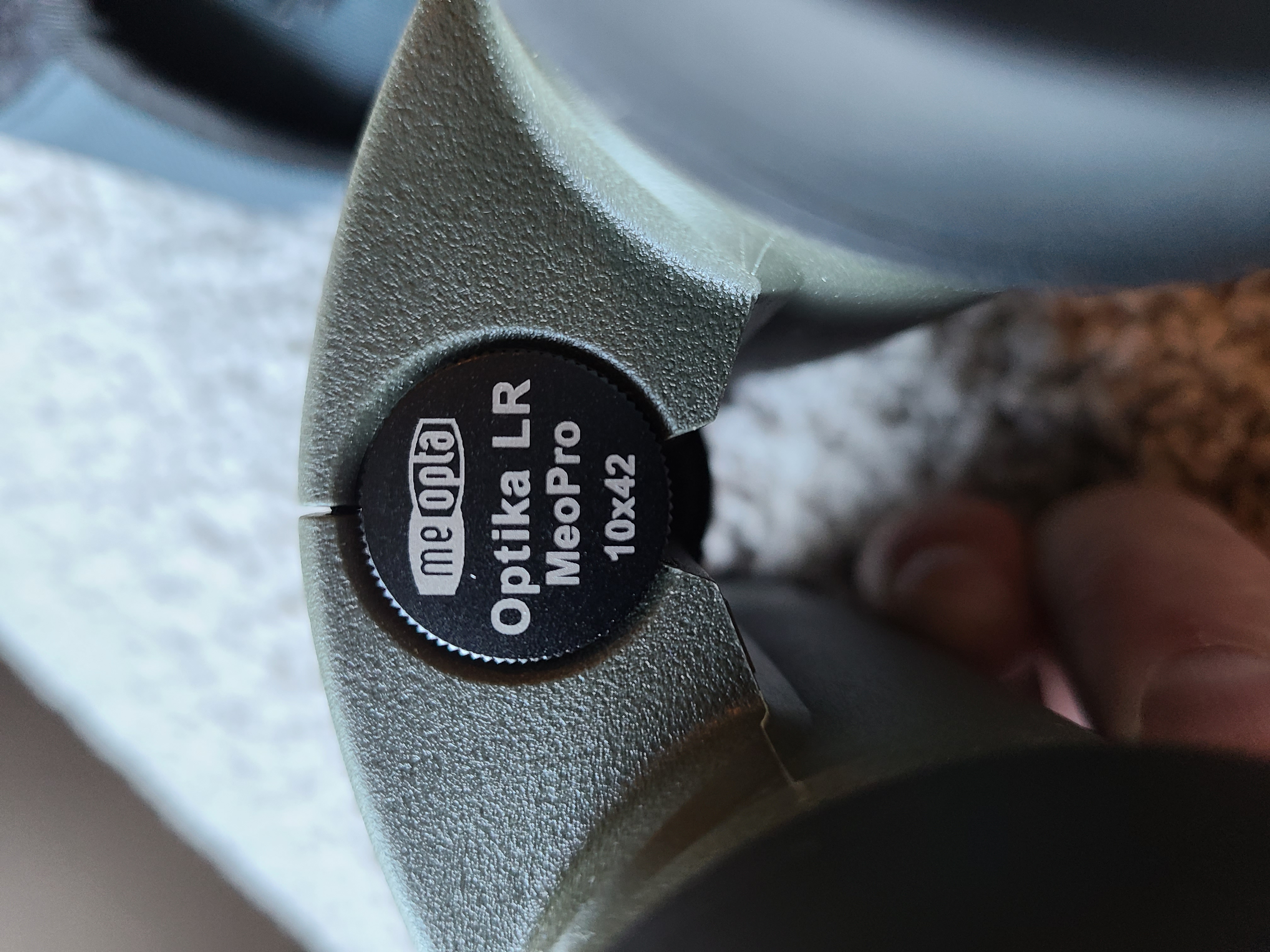 Comes with a one piece eye cover, and really solid flip down lens covers. A neck strap was supplied, but I don't see myself using it. Instead, I'll look for a bino carrier of some kind, or maybe order another Rick Young bino harness, as I liked how it worked on my old set.
Time and use will be the real judge of these binoculars, and I really hope they stand up. I have several Meopta scopes, and really like them all so far - super glass on them. I hope to use these in Africa in the not too distant future. I am on a 4-year savings plan, so hopefully not too much longer until I return. Until then Deer, Coyote and the odd unfortunate Ground Hog will have to suffice for now. I will update later with likes/dislikes after some real field use.
Hopefully some food for thought for those looking to make a similar purchase.
DmacD
C

Thank you! A useful report to me! I am a Meopta optics user and think they are one of the best values for the prices there are around! I am also thinking about a rangefinder binocular but I don´t want to go to the L, S or Z either....even more, I am thinking to go to a rangefinder alone unit. In that case I would go, probably for a Leica one.

Yes, the Meopta products have impressed me so far. I wanted the binocular/range finder combo to streamline what I take in the field.
DmacD
You must log in or register to reply here.