As some background information, incase you haven't read my husband's story yet, Edward and I went on a 10-day African safari with Blaauwkrantz Safari's; owned and operated by the Rudman family. We flew into Port Elizabeth on the southeastern coast of Africa where Arthur Rudman met us to start our adventure.

As soon as we arrived at the camp we wanted to check the zero of our guns to make sure they hadn't been knocked off in transit. I was shooting a T/C Contender in 35 Remington with 200-grain bullets. Ed's choice was a T/C Contender in 375 Win., also shooting 200-grain bullets. Both guns were equipped with long eye relief 4x scopes zeroed in at 150 yards.

Ed and I were sharing a PH and so we had to take turns shooting. Ed collected a nice blesbok on our first day but day two was mine and I wanted a caracal.We were on our way a little earlier that morning since we had an hour drive to the rancher's property. Arthur, knowing of my desire to bag one of the cats, had contacted a neighboring landowner four days earlier to be on the lookout for fresh tracks. We met with Theuns Viljoen just inside his gate along with his trackers and 5 or 6 dogs.

After a short drive to his hunting area we were out of the truck and on foot. We caught glimpses of the dogs and trackers on the other side of a deep, dry creek bed. They were weaving in and out of the trees and bushes when we heard the distinct barking that the dogs make when they have picked up the scent. We had to try to keep them in sight in case the dogs would tree the cat. My left boot was rubbing on my ankle and I was having a hard time keeping up. Soon the dog's barks changed to a shriller yap, so we knew they must have the cat treed. Off we went in that direction, me hobbling along, grimacing with every step. By now, Theuns was a short distance ahead of us. He was whistling and giving his dog commands. Just when he thought it was time for us to go in, off they ran again. The cat had eluded the dogs. Again we heard the shrill yapping, and hoped this would be the time. Theuns told Francois to bring us down. We hurried down the creek-bed, and up the other side. By then, I was on all fours. With Francois's help, I was able to get into position. He pointed out the tree the caracal was in. It was really dense with bushes and branches, but it was visible. Shooting free hand has not been my favorite position or my most accurate, but that seemed like the only way in this situation. 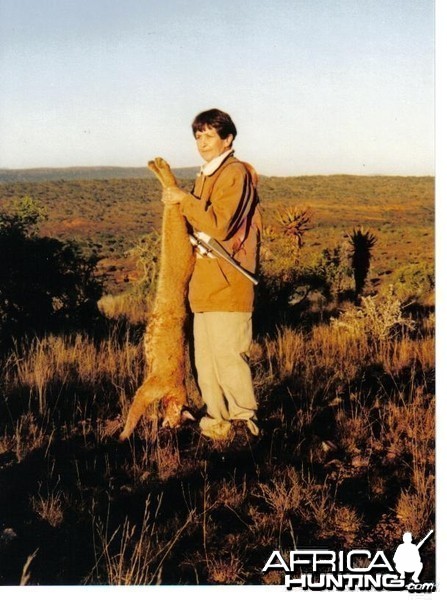 Ed holds up Deena's first African trophy, a caracal. The caracal is similar in appearance to the lynx in the USA. 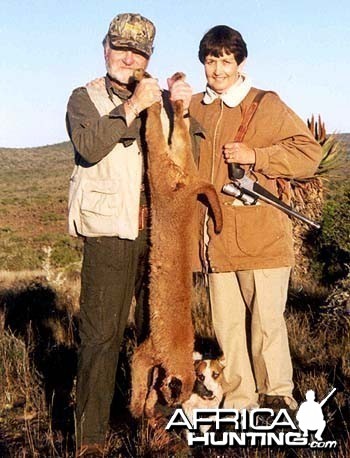 Because of the scopes long-eye relief my arms have to be stretched out, which makes it difficult to hold for very long. I leaned up against one of the trackers for support (I bet his ears are still ringing) and managed to find the cat in the glass. I was weaving all over the place as I began my squeeze. BANG! I thought it would never go off but Francois said, "You got it!" what a relief.

Ed and I made our way up the hill and there was my beautiful caracal tom lying under the tree. I was aiming somewhere in the body but hit him in the neck. Theuns had a little Jack Russell terrier that thought the cat belonged to him. He was keeping all the big dogs away, snarling and growling if they came close. Theuns had to step in and grab the little guy up in his arms. I was impressed with that little dog. Somehow the walk back to the truck didn't seem to hurt my ankle as much, I think I was floating on air. In the days to follow, I wore my sneakers. We took some nice photos and met Theun`s family over a cup of coffee. He shared his experience of his leopard kill the previous year. When we came outside, there was Gary, the Jack Russell, sitting behind the truck, still guarding his cat. I'll be naming the caracal, Gary. We give all our animals a name which usually comes from a special person, place or memory we shared on our hunt. Theuns, his dogs and his trackers are truly professionals at their job. It took less than two hours for this hunt from start to finish. He works his dog's everyday, and prior to a hunt he is looking for fresh tracks. This was a very memorable hunt for Ed and I.

Edward got his kudu on our fourth day of hunting and I decided I would like to shoot one also. Our plans were for a bushbuck for Edward and a kudu for myself. What an impressive animal, the kudu! I just had to have one of my own. The late afternoon is a favorite time to hunt kudu because they seem to come out of the brush and feed on the fresh green grasses. We thought we might be lucky enough to see some that morning and we did, but they were always out of range and looking back at us from a far distance. We glassed a number of bulls on the opposite hill, but we were never close enough. They seemed to know because they just stood there, enticing us to follow. After lunch and a brief rest we were out again. The wind had come up, and was changing directions and swirling about; this does not make for good kudu hunting. We found an area where they often were seen and settled in to let things quiet down. As evening approached, we starting seeing some game movement, cows and a few bulls. Francois let me know they were not big enough. Sure looked big to me. They were real spooky, not like Ed's hunt. The way the wind was blowing they had picked up our faint scent, because they were looking in our direction, and didn't linger. I hoped to get another chance but it would not happen today. As we made our way back to the truck we bumped into a bushbuck ram. These creatures are often encountered in near dark conditions and our run-in was no exception but Ed was able to get a shot and killed a fine ram.

Ed had really scored on the bushbuck. I hoped this afternoon would be my chance because our time was running out. The wind was blowing again, but holding steady in one direction. That was in our favor but it was also somewhat cooler. We were headed for a blind and I knew sitting still wasn't good for these old bones. We settled in though and soon I felt everything going to sleep and I began squirming about. I've never been much on waiting things out and patience is not my best virtue either.

Out of nowhere, they came. A big bull came down the hill and started feeding. He was broadside and when Francois said, "get ready", I already was. Bang! I saw him flinch but he started back up the hill. I heard, "Shoot again", while I was reloading. 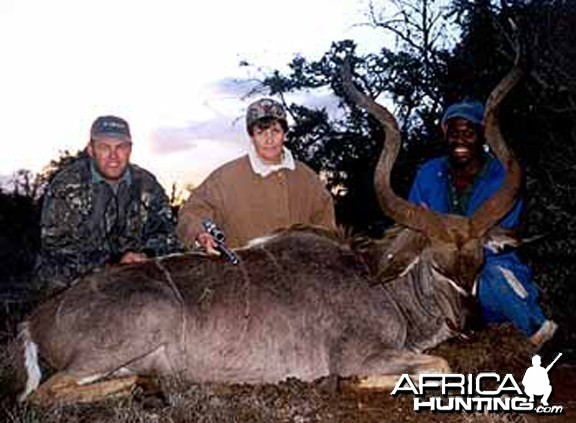 Deena, Francois her PH and her tracker OB pose with her kudu bull. Deena used the 35 Remington, a factory available cartridge, for her hunt in South Africa.

I wasn't about to lose this life time opportunity. He paused at the top of the hill just long enough for me to put one last shot into him. As we approached, there was that apprehensive feeling and I know I wasn't the only one feeling that way. What a sight; he was lying in the exact spot of the second shot. We were all ecstatic. Both shots were close to each other at different angles, taking out the lungs, for a clean kill. I am very proud of my kudu, a real trophy. I can't say enough about Francois and his patience. He never tries to rush you into shooting till your ready. It's like, if you don't go for that one, I'll find you another one tomorrow. He is confident that he can show you a trophy animal, and never had any doubt of his ability to do so. They run a top-notch operation. Each day was well planned and never a time for boredom. The meals were excellent and Arthur and Trinette are likeable and fun to be around and they both make you feel quite at home.
Last edited by a moderator: Dec 1, 2016
You must log in or register to reply here.