A hell of a good start for the first week of the hunting season!

This 104 pounder is the biggest Elephant to have been taken in Botswana since Elephant hunting reopened in 1996 and possibly the only hundred pounder in that time. This 104 and 99 pound tusker was taken with Johan Calitz Safaris in Botswana, PH Willy McDonald in the NG41 hunting concessions from the Jovorega Camp. 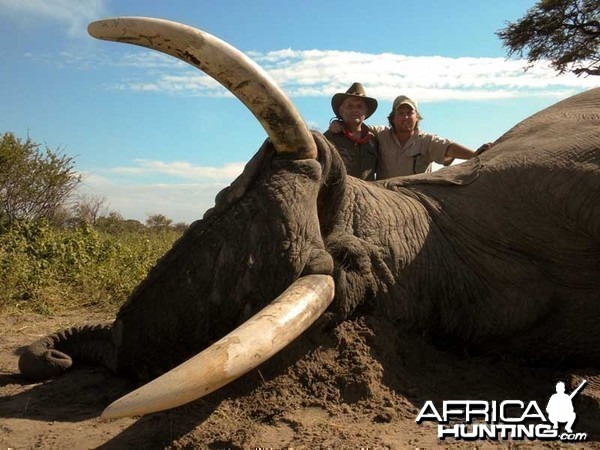 104 and 99 pound tusker hunted with Johan Calitz Safaris in Botswana, client and PH Willy McDonald to the right 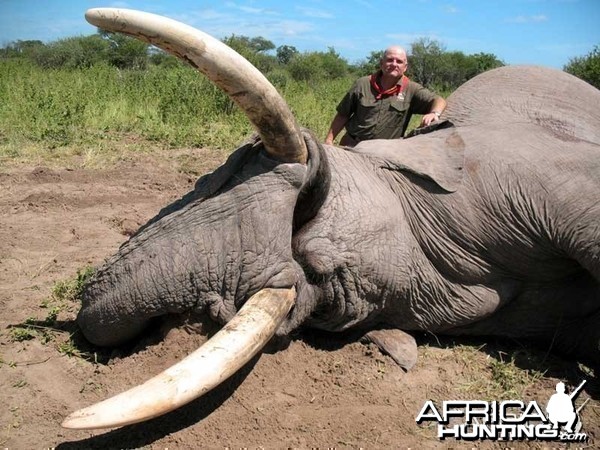 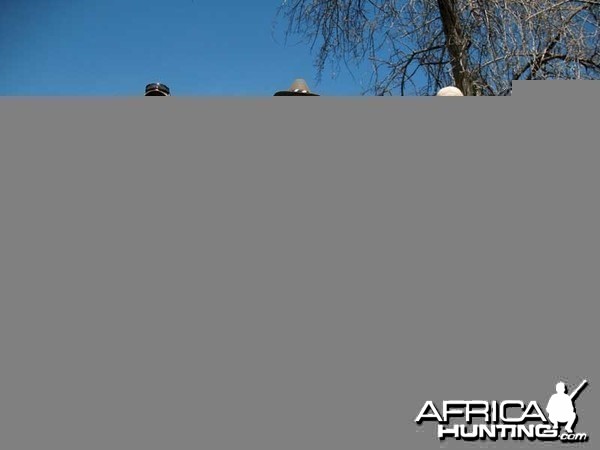 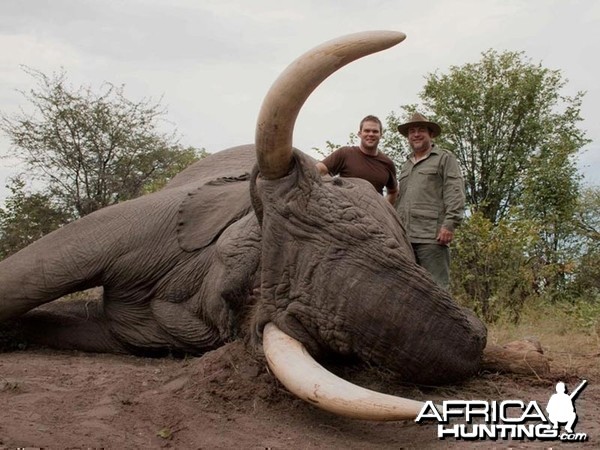 A born South African, Johan Calitz was involved in the hunting industry in South Africa and Zimbabwe from 1981 to 1987 only to become involved in Botswana on a full time basis during 1987. Since then, his company Johan Calitz Safaris has grown in leaps and bounds and has become one of the biggest and most successful hunting operations in Africa. 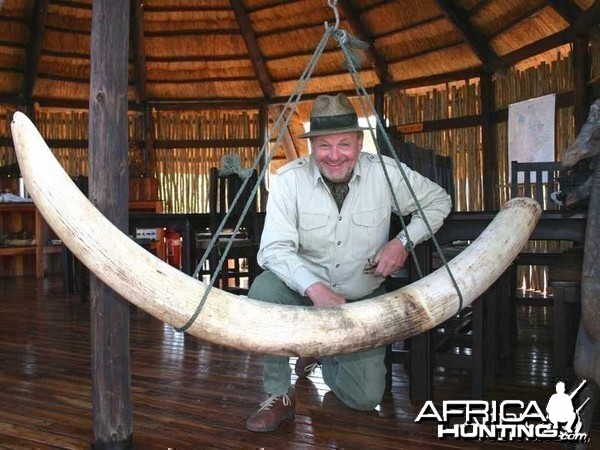 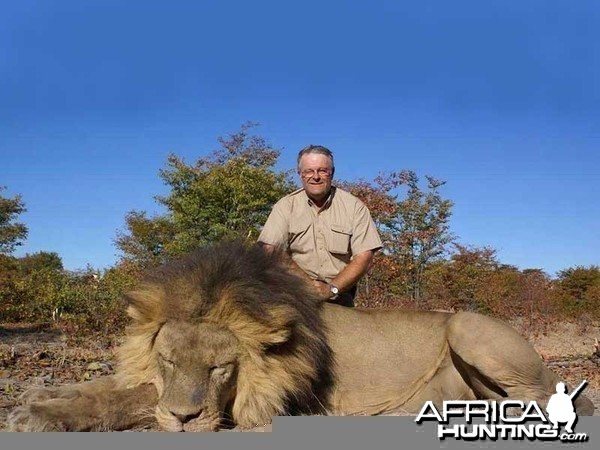 Johan Calitz Safaris has the privilege and exclusive rights to what is undoubtedly some of Africa's last wild frontiers and is being entrusted with the management of five vast government and community hunting concessions in the Okavango Delta and Chobe eco-systems of northern Botswana, covering 15,000 square kilometers of the parched Kalahari. 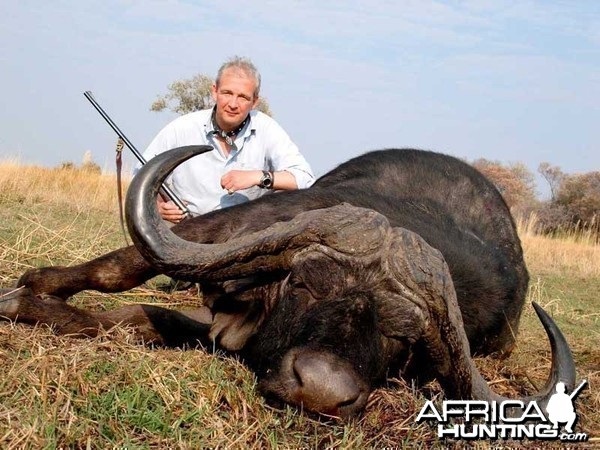 This 1,500,000 hectares of hunting concessions, from which he conducts hunting safaris from seven hunting camps from April to September each year, encompasses a wide variety of diverse habitats, which are home to the greatest concentration of game in the entire Southern African continent and the largest herds of Elephant anywhere in the world.

The principal form of utilisation of the Elephant in Botswana is through recreational or sport hunting.
A limited quota of eighty (80) bulls approved by CITES was introduced in 1996 and a further quotas
of eighty-seven (87) bulls for 1997, one hundred and sixty-eight (168) bulls for 1998, one hundred
and seventy four (174) bulls for 1999. One Hundred and eighty (180) in 2000, one hundred and
eighty (180) in 2001 and two hundred and ten (210) in 2002, 2003, 2004, 2005 and two hundred
and seventy (270) in 2006. This is after a self-imposed ban on Elephant hunting that started in 1983. The off-take is less than 0.2% of the total population and this should have no effect on the Elephant
population. Elephant hunting provides a good source of revenue for community managed wildlife
areas. This is important because it is these communities who bear the cost of living side by side with
Elephants. Ivory from recreational hunting is kept as trophy by the hunters.


Map of Hunting Concessions of Johan Calitz Safaris in Botswana 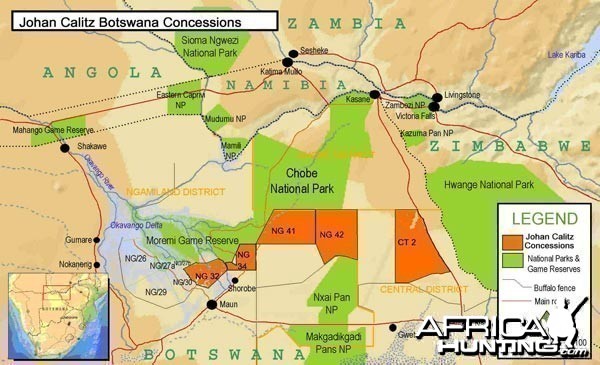 NG32
This stunning location is found in the heart of the world renowned Okavango Delta and constitutes a maze of rivers and palm fringed islands. These support a large diversity of wildlife and boast breathtaking sceneries. There are two hunting camps in the area namely Qorokwe and Ivory. The latter can only be reached with the aid of an outboard powered boat. This trip takes roughly two and a half hours and is the start to an adventurous and memorable hunt, which focuses on the same mode of transport, transferring the hunter from one island to the next.
Qorokwe Camp can be reached by vehicle, however if the flood levels are high for any particular year the trip to camp can become very tricky. The transport with the aid of a 4x4 hunting vehicle should be in the region of two to two and a half hours. There is further more an option to book a helicopter that lands directly in either camp.
This unique area offers both sightings and hunting opportunities of aquatic and water dependant species such as the Nile crocodile and red lechwe, while Buffalo, Elephant and several plains game species are concentrated on the islands. The Okavango Delta waterways and channels are constructed and maintained by the hippopotamus - which is very important for the eco-system. Because of its importance the hippopotamus is protected and it is not possible to hunt it in Botswana. 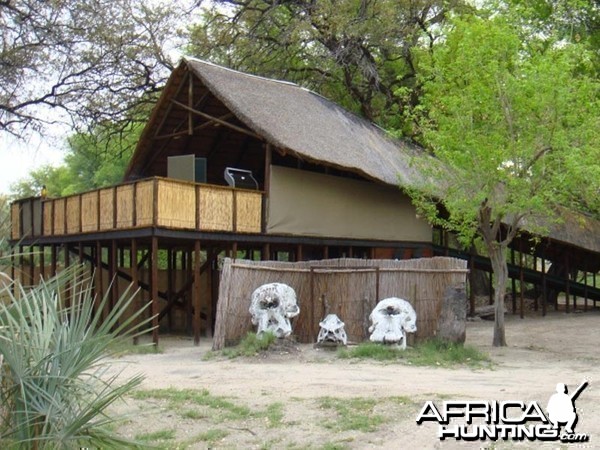 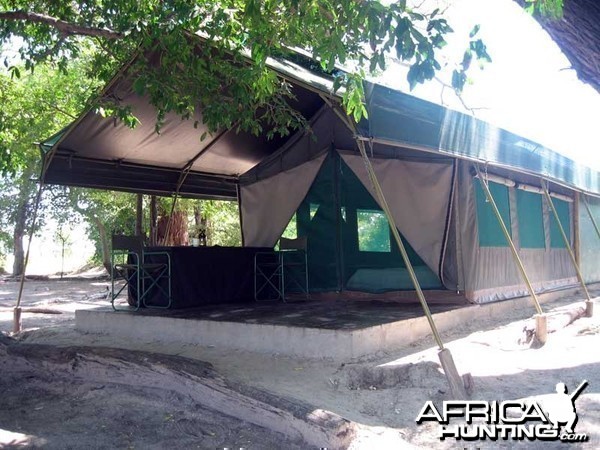 NG34
This area is the true symbol of northern Botswana as it represents a land of great contrasts. It includes a large diversity in habitat, ranging from dry Mophane woodland in its north to mesic riparian vegetation where it touches the Okavango Delta in the south west. It further more borders the world famous Moremi Game Reserve, with the reserves main access road running through the area.
A large diversity of plains game is found in the area, providing the hunter with ample opportunities to hunt species such as the Southern Greater Kudu, Blue Wildebeest, Tssetsebe and Impala to mention only a few. The area further supports a healthy population of both Cape Buffalo and Elephant. These consist of both migratory and resident populations and density is determined through local environmental conditions such as rain.
The hunting camp, Sankuyo is conveniently placed in relation to the organization operation office and the international airport in Maun. A short one hour drive by the means of a 4x4 hunting vehicle is all that it requires. The concession is managed with close involvement in the local community. 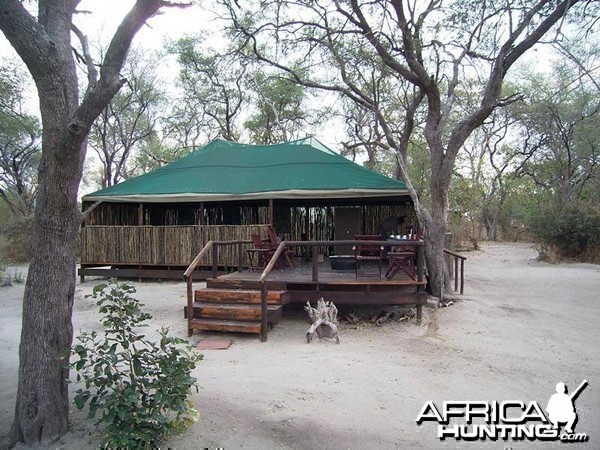 NG41
This beautiful concession is partially located in the well known Mababe Depression, an area that was hunted by early explorer and adventurer William Cornwallis Harris during the late 1830's. It is located to the south of the Chobe National Park and to the east of the Moremi Game Reserve with the Khwai River flowing through the western part of the area.
Two hunting camps are found in this concession namely Mababe and Jovorega. They can both be reached from Maun International airport by aid of a 4x4 hunting vehicle. The trip takes approximately two and a half to three hours respectively to complete. Alternatively the concession can be accessed by air with a small chartered airplane.
This concession is known for its beautiful Mophane woodland dotted with large rain filled depressions or pans. It is home to a diversity of both migratory and resident dangerous and plains game species. Elephants in particular, migrate on a seasonal base through the area between the adjacent Okavango Delta and Chobe zone. 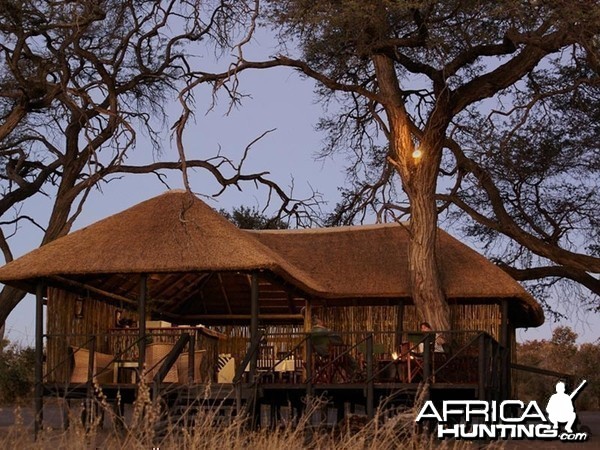 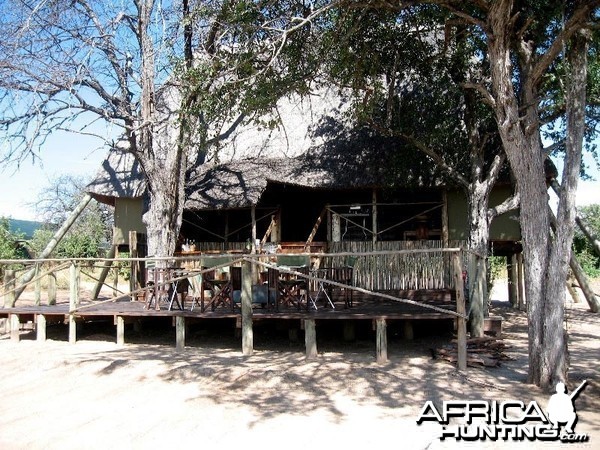 NG42
This concession is located in the heart of the beautiful Kalahari Sandveld and is sited to the south of the world renowned Chobe National Park. There are no natural river systems present in the area - this precious life source is found in the form of rain water caught in natural depressions/pans. In addition to this Johan Calitz Safaris maintains several artificial waterholes within the area.
The hunting camp, Masame, can be reached by 4x4 hunting vehicle from Maun International airport. This trip will take approximately four hours; however there is also the option to charter a small airplane to the bush strip close to the camp; the latter is recommended.
The area is dominated by Mophane woodland with intrusions of several other wood species. Game is often concentrated around waterholes. Both dangerous game and plains game are migrant as well as resident and their densities are highly dependent on local environmental conditions such as rain and available grazing. This area offers hunting opportunities at species that favour Kalahari conditions such as Gemsbok and Eland. 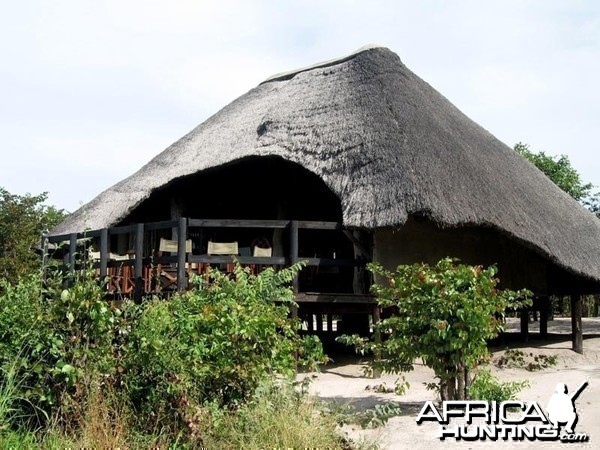 CT2
This area is located in the Central District of northern Botswana. It is positioned furthest from the organizations operations office and the international airport in Maun. Due to the latter it is recommended that a small aircraft be chartered to reach Nata and then be transported to the main camp, Kukama.
While this concession is located in the Kalahari Sandveld it is home to large herds of Elephants and is situated within the migrating routes of these and other animals between Zimbabwe's Hwange National Park and Botswana's Okavango Delta and Chobe area. The area is dominated by broad leaved woodland with Mophane veld forming the main plant community with intrusions of Zambezi teak in the northern and central parts of the concession. This provides habitat for several plains game species including the Greater Southern Kudu, Gemsbok, Burchell's Zebra and many more. Sweet perennial grass species also provide grazing for Cape Buffalo in the area.
Animals derive their water from natural depressions filled with rainwater, generally referred to as pans. These are supplemented by artificial waterholes maintained by Johan Calitz Safaris, as there are no river systems within CT2. 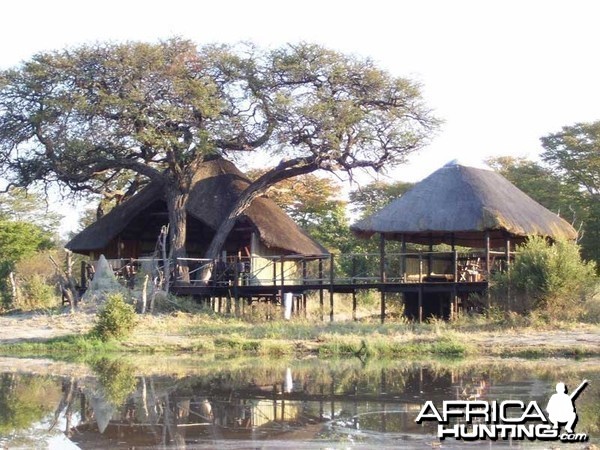 
Johan Calitz Safaris, Botswana
Building a legend... not only a reputation
www.johancalitzsafaris.co.za
Last edited by a moderator: Dec 1, 2016
Jerome Philippe, Founder of AfricaHunting.com
You must log in or register to reply here.

Is Johan Calitz operating in Botswana?

Building A Legen Not Only A Reputation Johan Calitz Safaris Botswana

Leopard Legend Hunting Safaris
We will be at the Dallas show and the SCI show in 2023. Booth # to be updated soon.
Today at 10:00 AM •••
G
geoff rath Von Gruff geoff rath wrote on Von Gruff's profile.
G'day, Von Gruff; Could you give me an idea on your Bearded Chef Knife, as per your posted photos, delivered to Australia? I'd like to reward a good mate (excellent amateur chef) who has done me big favours in the past. Cheers, Geoff Rath
Aug 4, 2022 •••