So my first .470 NE double was hitting a 12” high and the gunsmith suggested building up the front sight with epoxy putty and then filing it down until it hit true to point of aim. 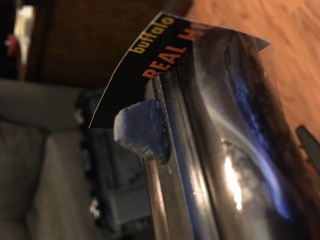 Then step 2 will be sending it off to him; this way he will know EXACTLY what height replacement sight to install.

A little orange paint for visibility (indoor range) and I brought a #9 file and 200,400 grit sand paper to adjust and were off to the range. 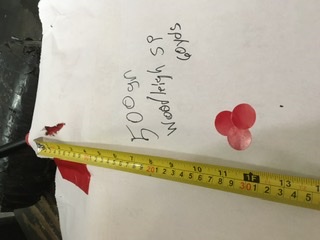 It should be noted that the above group was shot at 60yds, as well as being my first time shooting this rifle I just purchased and my first double rifle as well as first .470NE.

Well for the second set of targets, these were fired at 50yds, standing with a BOG Pod bipod resting on the bench.

A few strokes with the file and fine tuning with sandpaper and I start seeing good results. 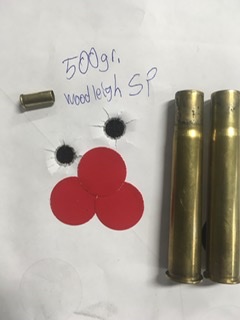 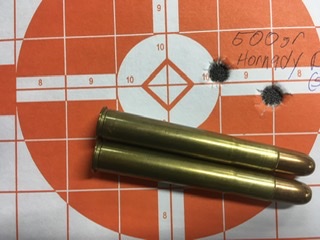 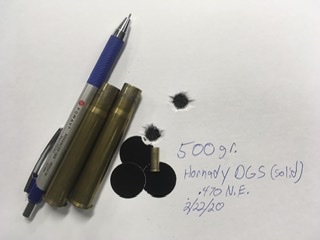 I thought I would share this If someone was dealing with sight issues; because it worked for me.

Now it’s off to the gunsmith for the front sight replacement; which FYI the Smith is the same man who re-regulated this rifle.

I think you have no further worries. I went through a good deal of trial and error with my Ruger No. 1 in .458 Lott. I decided I wanted express sights. Ruger has them or never made anything like that depending on who you talk to on a given day. I am excited for you that you have found the new sight height. I would encourage you to shoot more and see if the honeymoon wears off before making final specs on front sight height. You may learn to control the gun better and the sight could end up being off.
How is it a man with fifteen rounds of 5.56 feels under equipped and a man with fifteen rounds of .375 hasn't a worry in the world?

Good deal! If not hunting the gun right away maybe a good idea to leave as is and shoot some with possible or different ammo- just to make sure. However it should be very close since it is just an elevation determination with no windage. The gunsmith will simply center up the new sight same as was the original. I used to do a variation of the same thing with old military muskets that always shot high at 50 and even 100 yards. I would simply tape a piece of thick gray cardboard to the front sight and shoot at desired range with established load. Started tall and cut down until correct height determined. Then fitted a sight of correct height to the front. Did the same with different Mausers and Trapdoor Springfields that had front sights too short and shot way too high with lowest rear sight setting. Found the right height with a temp cardboard front taped on.

I agree with you both on shooting it more and with different Ammo before settling on a front sight.

All of the Ammo I fired as of yet, came with the rifle and I have the load data.

I went ahead and purchased 8lbs of powder, 1,000 primers, and hundreds of bullets it’s regulated with; I just need to secure some new brass and I’m done for components gathering.

For now I need to have a trim die ordered for the brass as well as a crimp die. While I double check and test my hand loads + experiment with other projectiles.

once all load development is done, then the rifle will be sent off with a supply of Ammo and the gunsmith will take care of the sight.

He's a nice guy letting the smith shoot the gun too! I guess he's gotta be extra sure the sight doesn't come off. I can see the emails now, nice gun...shoots well...sight not ready yet send more ammo...just curious why he asked it to be sent to Tanzania...

Get ahold of krieghoff USA they use to sell WR brass once fired really good brass that they used to regulate rifles with.
Rodney A McCartney

Well mission accomplished, I finally got the gun sent off and new sight installed.

Ken wanted to double check the regulating so he mount his custom peep sight on the gun and shot both barrels from standing rest @ 50yds. 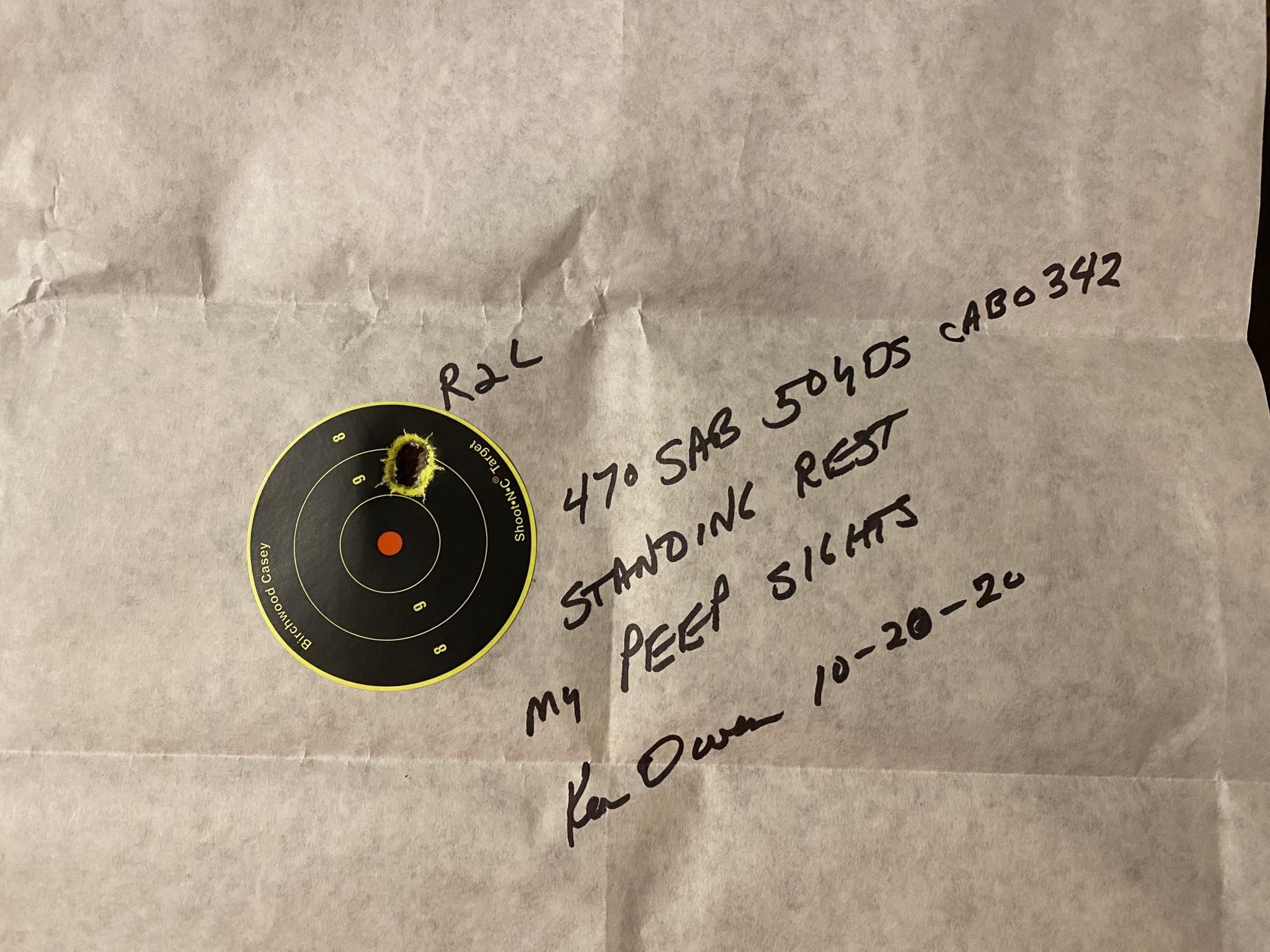 "I had to walk down there to the target after the second shot to see that it was actually 2 bullet marks!"

Then he mounted the new sight and it's ready to hunt! 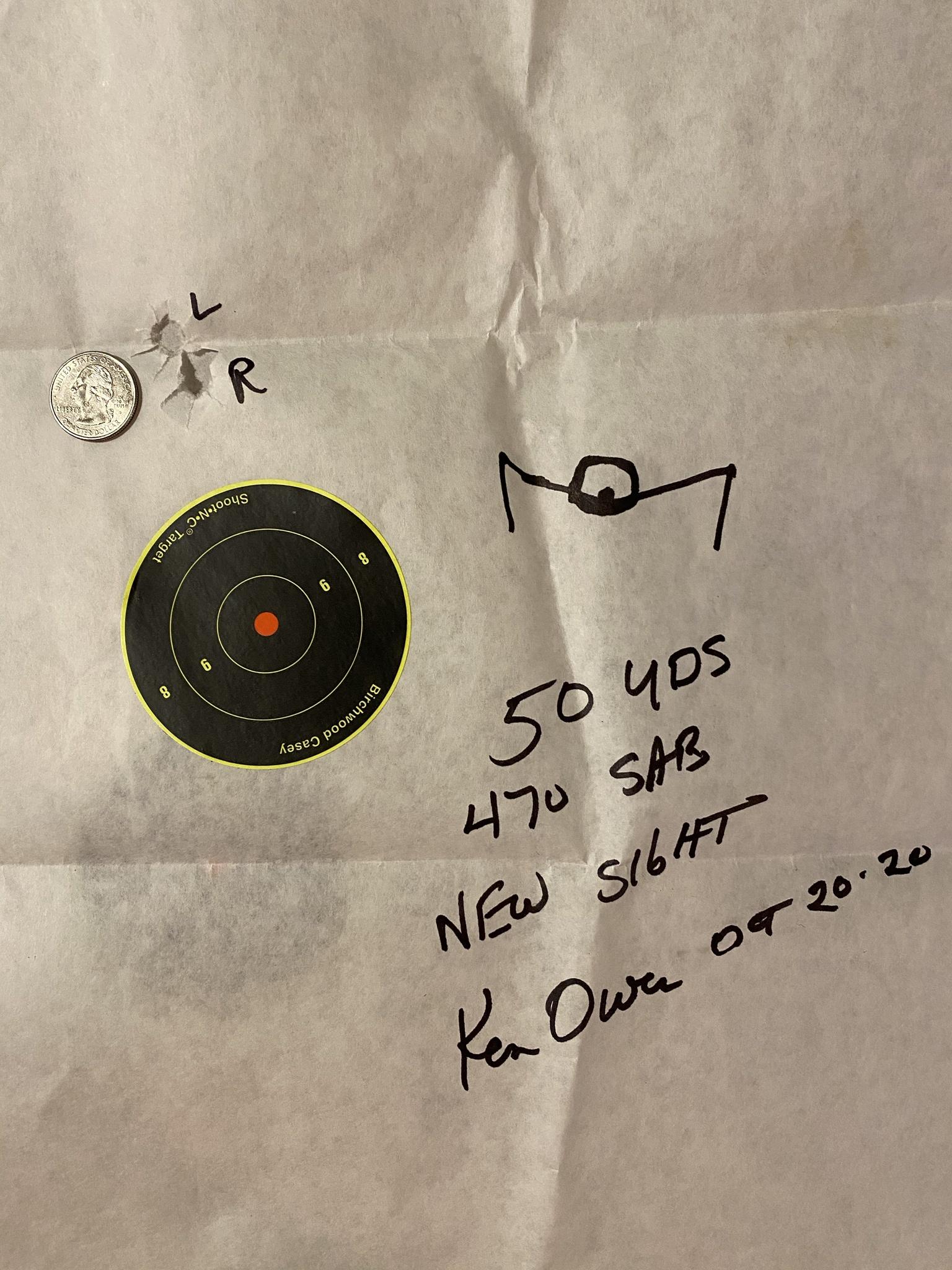 Like to know how big the aperture is on the peep sight.
If it's not too small you may want to get it.
Or if it has interchangeable apertures.
A true "ghost ring" sight could be very useful on a double.
With results like that, it could be worth it.
“They that can give up essential liberty to obtain a little temporary safety deserve neither liberty nor safety.” Benjamin Franklin 1759

ve7poi said:
Very nice shooting
Don’t you love it when a plan comes together like that
Click to expand...

Yes sir I surely do!
You must log in or register to reply here.