As to turn bolt extraction, bruce moulds is correct. CRF or PF has nothing to do with it. The camming (operating word: camming) extraction power comes from the fact that when a turn bolt handle is lifted, an angled camming surface engages either against a lump inside the rear bridge, or against the rear bridge rear face, to converts some of the lift force of opening the bolt into a rearward force, therefore an extraction force. Because this force is leveraged by the camming function, it is a superior force to a straight pull force. 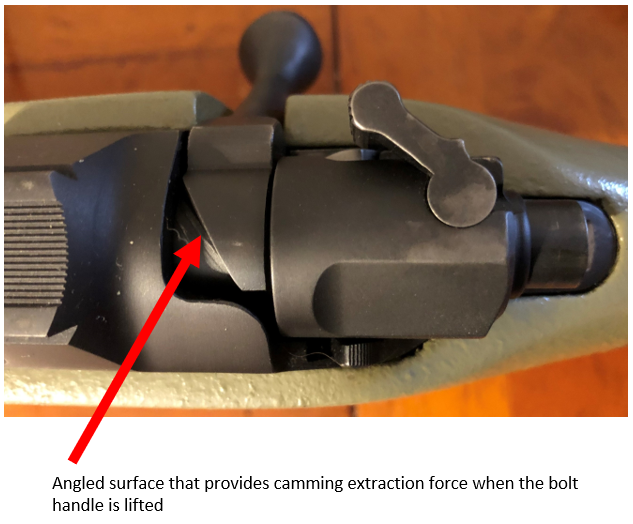 Straight pull actions by definition do not have a rotational bolt handle movement, hence no extraction camming power. Admittedly, this is not required until a case gets stuck into the chamber, in which case any straight pull action will provide less extraction power than a typical well-designed turn bolt action.
Last edited: Nov 14, 2020

bruce moulds said:
interesting comment on the video re extraction.
he comments on the lack of extraction camming of straight pulls compared to turnbolts.
bruce.
Click to expand...

I have never used a straight pull action rifle bit when I think about it, it would not have the canning power of a bolt action.
Hmm something to think about but

I don’t think a hunter would be using ammunition that was not “perfect”.
I mean by test it would be correctly sized.
B

One Day... said:
Understanding the physics of it...

Hmmmm............. as much as I hate to be raining on Norma Academy's parade, the reality is that a hand loop like this is entirely useless, and BeeMaa's conclusion "another piece of gear that would end up in a drawer" is correct...

When shooting a rifle, the butt rests on the shoulder. This contact point is also the pivot point upon which the stock rests, relatively stably, as the muzzle wobbles.

When a shooter uses an elbow rest, whether it be on the ground when shooting prone, on the knee when shooting kneeling or seating, or on a support (e.g. tree branch or rock) when shooting standing, a second contact point is created half way between the butt and the muzzle. However, the elbow itself being flexible, it constitutes another pivot point, and this allows the muzzle to still wobble, although less than if the elbow is not used, because the second pivot point is now closer to the muzzle.

The purpose - and the physics - of the shooting sling, whether it be a competition sling wrapped around the bicep close to the shoulder joint, or whether it is a military or hasty sling wrapped under the bicep close to the shoulder joint, are:
With a sling under proper tension, the butt of the rifle is at a relatively stable point on the shoulder; the elbow is at a fairly stable point on the ground, on a knee, or on some form of support; and the support hand is a fairly stable support point at the end of the arm and the end of the sling.

Once the physics of the application of forces in the sling technique are understood, it is easy to conclude that:
In both cases, the rifle and support arm still wobble freely around the shoulder pivot point...

And obviously, as previously noted, attaching the sling to the barrel defeats the purpose because a properly tensioned sling will flex even competition bull barrels...

one day,
you saved me a post, and you did it more eloquently than i could have.
the sling thing in question is more of a hindrance than an asset.
it puts the hand in a fixed position when that might need to be varied with conditions.
when you see "norma acadamy" you instantly know ADVERTISING.
to do this they need cred, and including this sling implies a greater understanding of this subject.
further thought however reveals that they have avoided the importance of basics, so often done in modern times in the shooting industry.
bruce.
You must log in or register to reply here.

What do you use for carrying your ammunition etc?
2