Following Ron Thomson’s submission of an article on Botswana’s lions and all that has followed since that time. 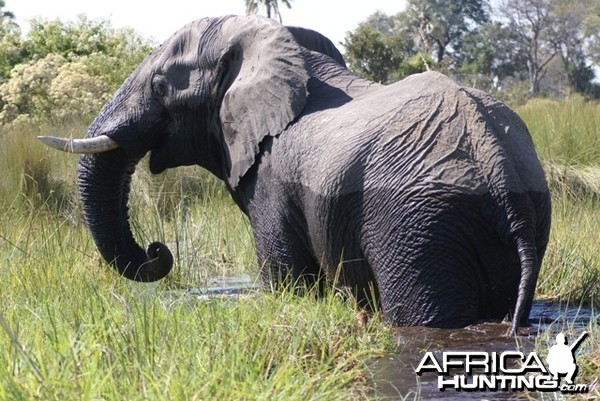 I am pleased with the productive interactions that are now taking place. It is good to get people to “think” – and to think for themselves. In the recent past too many people have glibly accepted the ideas (and ideologies) of others. As John Davey has said to others in Maun – and I emphasise this - I have no hidden agenda with regards to expressing my wildlife management views other than to see that Africa’s wildlife prospers and survives into posterity. My concern is that, if we continue in our present direction, Africa’s wildlife will be “gone” inside 50 years. This, however, is a BIG subject that I have covered inside 450 pages of text in a book (A Game Warden’s Report).

Trying to solve the complex problems of African wildlife management is NOT possible via few Emails. However, there are salient points in the referred to interactions that indicate that those who are doing the constructive thinking (Kevin, Derek et al) are addressing the problem by starting half-way up the “pyramid of concern”. So THIS new little contribution is submitted to get us all down to basics – to the foundations – from where ALL arguments need to begin.

Our national parks were set aside to maintain – forever – pristine pieces of Africa in as natural and ecologically-balanced state as possible. These “pieces” of Africa are called “biomes”. A biome comprises a distinctive vegetation-type complete with its endemic animal components. Botswana’s protected areas have, among others, biomes representing typical riverine forest (typical, that is, of riverine forests that occur in Botswana); biomes representating deciduous Acacia/Combretum woodland (typical, that is, of deciduous Acacia/Combretum woodlands in Botswana.); and biomes representing Baikiaea Teak Forest (typical, that is………..etc); and several others.

In effect, in more simplistic terms, this means the sanctuaries must be managed effectively so as to protect each area’s biological diversity – that is, they must ensure that no plant or animal species becomes extinct. The fundamental purpose of our protected areas, therefore, is to protect and to maintain their inherent biological diversity.

Elephants are NOT the issue in Botswana. Protecting Botswana’s biodiversity IS the issue. It just so happens that Botswana’s excessive elephant population is destroying the biomes the national parks were created to protect. That means, to restore the balance (between habitat and animal) Botswana’s elephant numbers will HAVE to be reduced - and reduced DRASTICALLY. My estimate (IF my calculated elephant population figures for Botswana are correct) is that Botswana needs to cull 140 000 elephants as of October 2003. That will leave 7 500 – which is also probably far too high – given the fact that the habitats in Botswana have been hammered by too many elephants for the last 40 years and more.

And there may be other herbivorous species that will need concomitant reduction if we are to effectively restore the ecological equilibrium that we desire.

How do I come by these figures? Well they are based upon the government’s own statistics. The official elephant count in 2000 was 120 604. The figures indicating the progressive increase in elephants during the 1990s could not have been attained unless the population was increasing at a rate of 8 percent per annum. Most scientists will tell you that that figure is improbable. But it is the only one that accounts for a doubling of elephant numbers in the nine years 1990 –1999. In scientific circles the figure 7 percent is accepted as being the probable “maximum” elephant population incremental rate. Botswana claims and incremental rate of 5 percent – but THAT is impossible given the rate of increase of Botswana elephant herds. So let us accept 7 percent as Botswana’s REAL elephant population increment figure. Using this figure, in the three years since 2000, Botswana’s elephants MUST now be sitting at 147 745. And THAT means Botswana will have to cull 140 000 elephants (plus the annual increments over the period of time the culling teams will take to reduce this population) IF the country has any hope at all of getting its now devastated biomes to return to a healthy state. In other words, I am here suggesting that circa. 7 500 elephants is what Botswana needs to maintain its elephant herds at. And, you might ask, how do I come by the figure 7 500? I will come to that!

Scientists first began warning Botswana that the elephants at Chobe were starting to damage the riverine forest, and the Acacia/Combretum woodland, in the early 1960s. Exactly the same thing – funnily enough - was, at that time, also happening in Hwange and in Kruger. And since 1960 many different scientists have warned that – progressively more intensely – that, throughout Botswana’s North West, elephants were damaging their habitats irrepairably. 1960, therefore, probably represented the time when Botswana’s elephants first crossed the threshold of their habitat’s carrying capacity.

Change must be viewed as a dynamic state of affairs – not something that is static. Change, for example, will occur in the normal 7 to 10 year weather cycles.[

Elephant carrying capacity – within this milieu – means the number of elephants that the biomes, in their healthy and near-climax state, can carry “without being permanently changed by elephant action”. It normally – in reality – means that the numbers of elephants will maintain the habitats in a constant sub-climax state that is maintainable year after year after year. So don’t get bogged down trying to apply diverse definitions of “sustainable carrying capacity”. What I have said here is EXACTLY what ALL national parks that support elephants should be endeavouring to do – even though there is a scientifically pedantic experiment afoot (in Kruger) that is far beyond the capabilities of most African countries to execute. Furthermore, it is unproven and it is highly risky – in terms of risk to species diversity.

The rate at which animal populations double their numbers can be very easily determined from their REAL incremental rates simply by dividing their “actual” incremental percentage rate into the “magic” figure “72”. So 7 percent means that the population doubles in “about” 10 years. It also means that, if you move back in time, you can determine past population figures by simply halving the population figure every 10 years. Ipso facto – if Botswana’s elephant population was 120 000 in 2000, it was 60 000 in 1990; 30 000 in 1980; 15 000 in 1970; and 7 500 in 1960. This gives us a baseline parameter to gauge what the elephant population SHOULD be today – but one must also remember that in 1960 the habitats were then relatively healthy. They are not in THAT condition now – which means even MORE elephants will have to take off (and kept in low numbers for some years) to allow the habitats to recover.

IF Botswana elephants numbered 147 745 in October 2003, therefore, Botswana is now nearly 2 000 percent overstocked (in terms of what the ORIGINAL habitats could sustainably carry). I hope this puts the Botswana “elephant problem” in better perspective in your minds. Too many elephants are the reason you have a wildlife management problem in Botswana – and that in itself is a huge problem - but they are not the problem you have to solve. The fundamental problem you have to solve is that of restoring Botswana’s biomes to their original state and the most important thing you have to do to achieve THAT “desirable end result” is to drastically reduce your elephant numbers. But THAT may not solve ALL the problems you are likely to encounter along the way.

If we are to get to the bottom of Botswana’s wildlife problem, THIS is the mind-set we must understand and accept. It is NOT an easy problem to solve – but the first step in solving it is identifying the problem correctly. We must also understand and accept the fundamental “reasons for being” of our protected areas AND GET BACK TO BASICS. Just killing elephants is not what we want or need to do.

And don’t be confused by the wild fire issue – but it is good that you have recognised fire as an important ecological factor. Wild fires are “skip” agents in this whole management conundrum. They are very important as the elephant over-population syndrome develops because there comes a time when the numbers of elephant becomes irrelevant. That time occurs when the forests and woodlands have been reduced to such a low climax state that grasses predominate where only trees once grew. And at a critical ‘turn-over’ point fire does more damage to the vegetation that do the elephants - and fire then completes the destruction that the elephants started. At THAT stage if all the elephants suddenly died fire would complete the destruction-cycle without them. That is what we call a “flip” stage in the syndrome. Animals like impala can also become “flip” agents – in another dimension – as can porcupines. The control of wild fires THEN becomes just as much an important management factor – in order to achieve “the desired end objective” – as is elephant (or impala) reductions. This is not going to be an easy matter to solve - but it would have been unnecessary IF Botswana had started to control elephant numbers in c.1960.

Botswana is, however, not the ONLY African country so affected.

ALL this is very clearly and thoroughly explain in my new book – “A Game Warden’s Report” – which I believe NOBODY involved in wildlife in Botswana should be without. A major slice of the book deals with the Botswana “elephant problem” – right down to just how (in minute detail) the population reduction can be implemented.

I hope this submission helps you to “think” this issue through properly – starting from the basics. Don’t just “think elephants”. Think biomes. Think species diversity. And think “conservation priorities” – No 1 priority is for the soil, for without soil no plants can grow; No 2 priority is for plants, because without plants there can be no animals; No 3 priority is for animals. So if you put animals first on your priority list you are putting the cart before the horse.

And Botswana is losing soil heavily. Consider the fact that the soil from Chobe’s riverine forest and adjacent woodland complex was washed down into the river (or pushed down by elephant feet) – due to there being no vegetation on the riverbanks to protect it from the rain – and that, because the river had silted up, the Chobe river changed course ……. A international “situation” then developed to determine who owned sovereign rights over the new Island that had been thus created. Botswana is FULL of such “interesting” ecological circumstances. Think about them. Absorb them. Make them part of your psyche. Don’t get bogged down by the elephant issue….. and whatever you do don’t be taken in (or cowed) by the animal rights brigade – of which you many influential members in Botswana. They have NO opinion worth a damn.
Last edited by a moderator: Dec 1, 2016
Ron Thomson
Ron Thomson Hunting Books - South Africa
www.ronthomsonshuntingbooks.co.za
You must log in or register to reply here.

I
Why Elephants Are Dying In Botswana
2

Does Botswana Have Too Many Elephants?

Why We Lifted The Ban On Elephant Hunting