This would have been a solid bull 50 years ago. Absolute fantastic bull today. Congratulation on a hunt well done.

Enjoyed the report. Thanks for sharing your memories with us!
And here I am, returning to Africa of many faces;.... the sloe-eyed temptress with flowers in her hair who stole my youth and my heart, and left me an old man with a kaleidoscope of conflicting memories of many dashed hopes and some fulfilled dreams. E. Echols

Great job sticking to the plan. Easy to say and hard to do!
HUNTERS make importation bans work!
J

Scott CWO said:
The day after we got the bull, we drove over to the main camp that Johan has rebuilt and picked up the ivory from the skinners. We decided to hunt some franklin, guinea fowl and doves. Ronnie and Johan also made a call to a rancher a couple hours south of Maun named Herman Nienaber, owner of the Kgabu Ranch, to see if he could help me get a nice gemsbok. Since I got the ele early enough to get home before Father’s Day, I only had one and a half days to hunt a gemsbok. Herman thought we had a worthwhile chance to get a gemsbok if we hunted hard and had some luck. I got this 39” gemsbok with an hour and a half to spare after a few blown stalks. The ranch is 18,000 acres and very thick. I shot it with softs with the Lott at 100 yards. Shot through a bush that covered the vitals by imagining where the body was located. Figured the Lott would punch through. It did and the gemsbok dropped.
Click to expand...

Congratulations on a great hunt and thanks for sharing!

Thanks for the magical story and congrats on a worthy old bull elephant. The entire safari sounds like a dream hunt. Well done my friend!

Now, I have two outfitters to talk to for Botswana elephant hunt for next year. It might take precedence over a lion hunt I was thinking of as bigger elephants are going to disappear from Botswana soon due to success of hunters like yourself.

Congratulations sir on an expecting elephant! Well done and thank you for the report!

Wow, congrats on a fantastic bull! A dream hunt for sure. And thanks for sharing your hunt with us. Well done!

Herman has been sending me photos of old blue bulls he claims have my name on them. You didn’t by any chance bump into them did you?

Red Leg said:
Really well written narrative of a hunt worth telling. Thanks so much for including us.

I occasionally pull up that clip of that lion charge. Waiting long enough to be sure - and then getting bowled over by a dead on its feet cat bigger than an NFL lineman - takes a pair. Though, I am pretty sure it was a carefully aimed and timed shot from the kneeling position rather than from "the hip" as claimed by the narrator.

That is the most incredible charge I have ever seen! I believe it was just off the NG43/NG41 cut line. I had an interesting follow up on a poorly shot buff in that brush. That is nothing compared to what these guys dealt with!
T

Really a great write up of a great hunt. Enjoyed all of it. Thank you

Great elephant. Well done. Thanks for the report.
Bruce

WAB said:
Herman has been sending me photos of old blue bulls he claims have my name on them. You didn’t by any chance bump into them did you?
Click to expand...

Only hunted one full day but I did see a group of eland with a big bull. Also found a big one that died of natural causes or a fight. Didn’t look like a lion took it down. Herman told me to shoot a big eland if we got on one but I politely declined and offered my rifle to Ronnie as he wanted one. Ronnie, being the consummate pro that he is, declined and said he would wait until after I got my gemsbok or come back another time.

Ronnie is great to hunt with as he has been in Bots for many years and managed seven camps for Johan back in the good old days before hunting was closed. He has also done a lot of photographic safaris over the years and can name every species of fauna and flora. 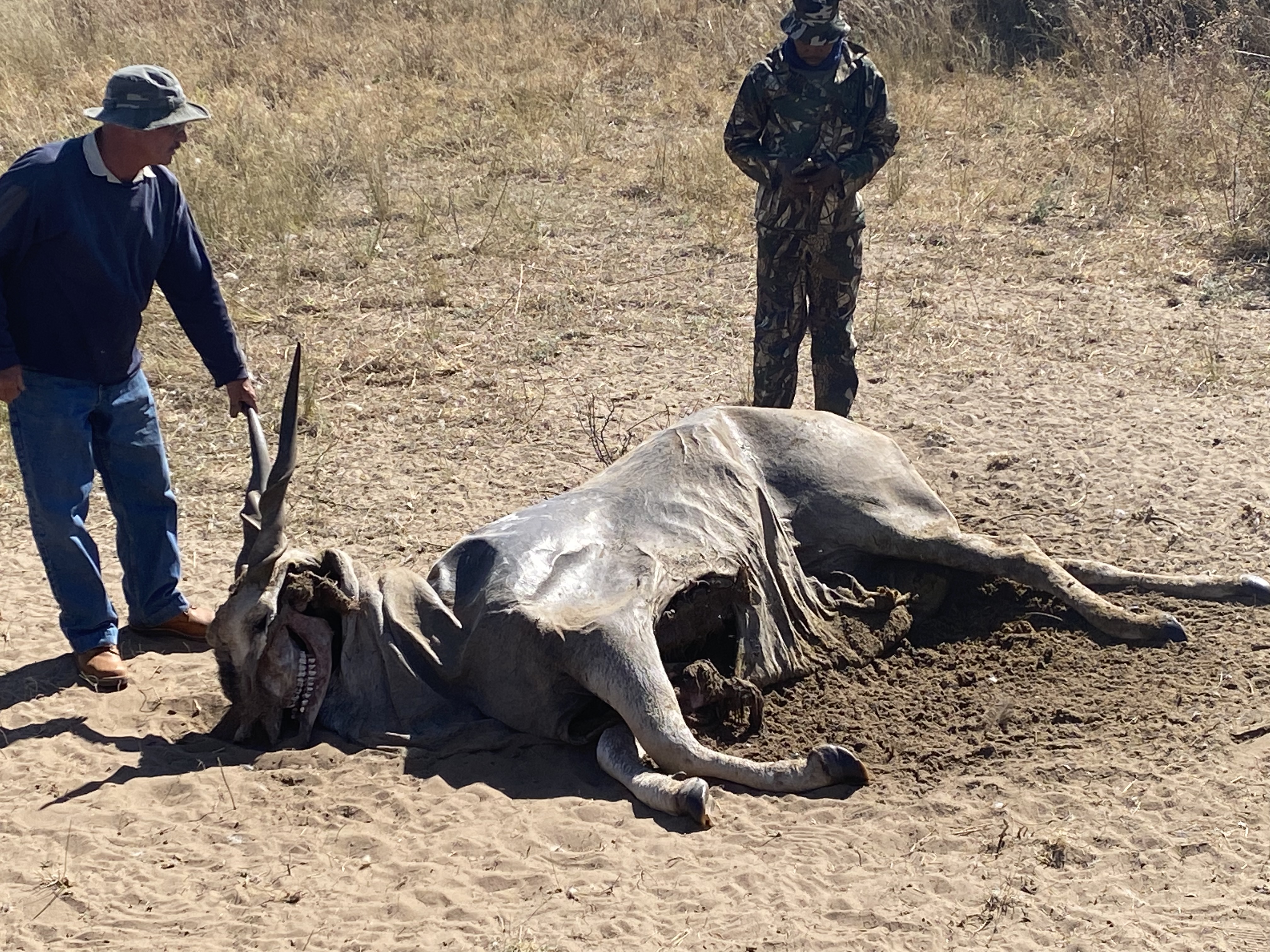 WAB said:
That is the most incredible charge I have ever seen! I believe it was just off the NG43/NG41 cut line. I had an interesting follow up on a poorly shot buff in that brush. That is nothing compared to what these guys dealt with!
Click to expand...

Yes it’s quite a story. A woman hunter wounded the lion in the back right lower leg with Ronnie. Reinforcements were called in. Everyone missed but Ronnie. The lion came directly at him. He was shooting a bolt action.458 Watt at the time. Missed his first shot but not the second. Said he had lion slobber on his leg! I think I would have had something else running down my leg! Lol.
Last edited: Jun 16, 2021

Tanks said:
Now, I have two outfitters to talk to for Botswana elephant hunt for next year. It might take precedence over a lion hunt I was thinking of as bigger elephants are going to disappear from Botswana soon due to success of hunters like yourself.
Click to expand...

You could be correct for some areas. However, so many of the best areas border either a national park, reserve or a photographic safari only area. The bulls will get replaced and they move around and cover great distances. Most of the Okavango Delta areas are now photographic safaris only and Johan doesn’t see that changing.

Wow, not a good feeling/start to the trip! Glad all was well once opening the case! Looking forward to the report!
Yes it was a bit disconcerting. I had my wife call Gracy and Bruce to ask Bruce to see if he could find the rod in the baggage rooms at JNB. He looked but did not find it.

Johan and Mattie also followed up with the airport staff in Maun to ask them to contact their counterparts at JNB.

Miraculously, the rod showed up on the daily Maun flight a few days later and the airport staff called Mattie to come get it. I still can’t believe that I got it back! Ronnie took me to a store in Maun and I bought a new padlock that is covered/protected and it will be harder to tamper with it.

Thank you for a great report. Really interesting.

Fantastic bull! Congratulations and thank you for taking us along! Great report.

Congratulations for this hunt ! And thank you for the report !

Congratulations on a fantastic hunt, and detailed report. Wow, I can only imagine the adrenaline rush of being so close to such a big animal. Is this elephant exportable to the US?
You must log in or register to reply here.