Although most species of bear are not endangered every species is given the highest level of protection under CITES Appendix I, with the exception of a few brown bear populations. Illegal hunting or trade in these species’ parts is prohibited at an international level and many countries with domestic bear populations also impose protections and import or export restrictions.

Several species of bears in Asia and North America are subject to illegal hunting. The bears may be killed for their claws, skin or other trophies; for their meat, particularly their paws; or for specific organs used in traditional Chinese medicine. In Asia live bears are illegally caught and sold to consumers as pets or to bear bile farms which harvest a small amount of liquid from the gallbladder that purportedly has medicinal effects. While many Chinese bear farms claim that they have breeding programs to create a fresh supply of bears there is little evidence of this being true and some farms have admitted to relying on taking bears from the wild in order to meet consumer demand.

For more on bear poaching, farming, and demand in Asia see Buyers of Bear Parts ►

The data below reflects the number of incidences where foreign or domestic border control or customs officials seized bears or bear parts being illegally trafficked. Not all Asian countries report seizures relating to the bear trade, and some reports came from seizures made at destination countries. Additionally there are gaps in the data where countries failed to make any seizures, in spite of known illegal wildlife trafficking within or through its borders.

A total of 694 seizures (page 14) relating to the Asian illegal bear trade were made from 2000 through 2011. An arrest or prosecution was made in only 51 of those cases. China, Malaysia, Singapore, and Vietnam were the only countries reported to impose fines as a penalty, with the maximum fine roughly $6,320 (in 2012 dollars) (page 36).

Cambodia was listed as the point of origin (page 14) or the destination of 190 of the 694 seizures. 60 of those seizures involved the trafficking of one or more bears, either alive or dead (page 20). Similarly, China was a major country of export, but was also a destination for trafficked bear products. 145 shipments were seized relating to China. 28 of those shipments contained a total of 299 bears (page 20). A total of 434 live bears (page 19) were seized over the twelve year period, likely headed to bear bile farms. Incidents of bear poaching for their parts, as well as for the pet trade, continues today. 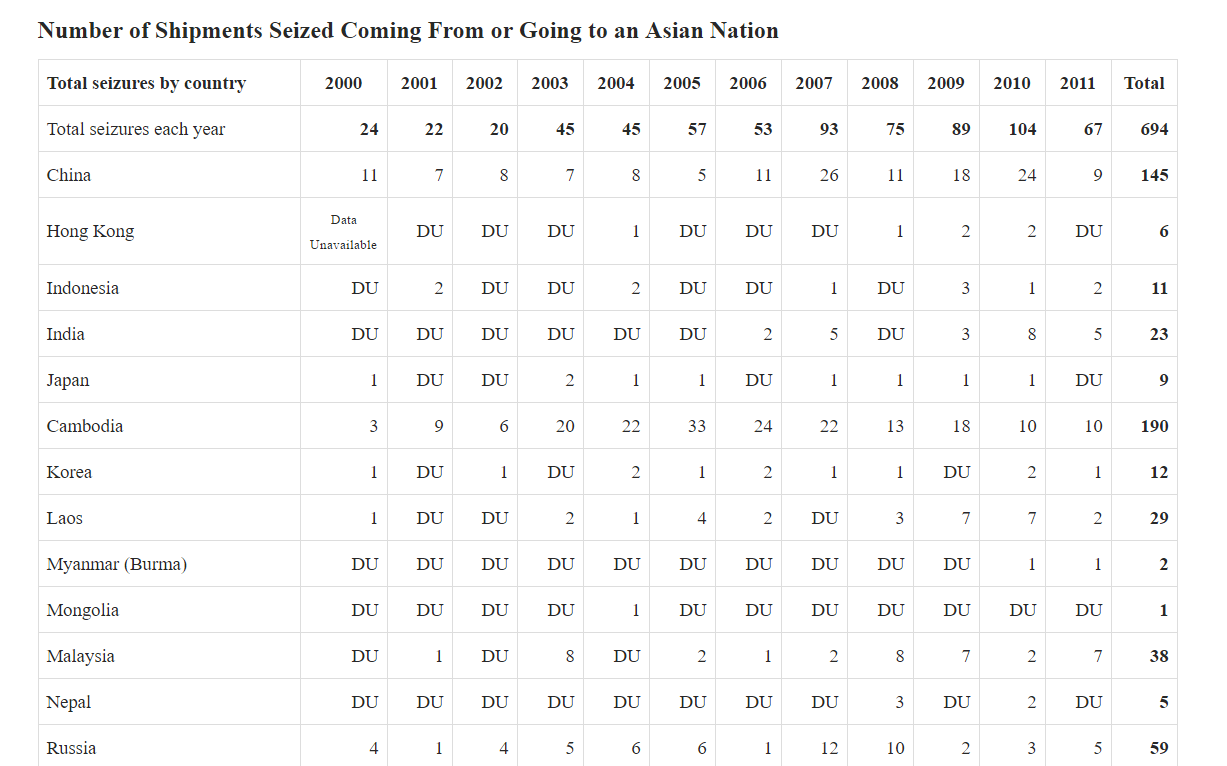 Although Asia appears to be the largest market for bear bile, paw, and other parts the United States made 210 seizures (page 13) of shipments from Asia related to illegal bear trafficking during 2000-2011.

Historical poaching data: From 1983 through 2002 there were 8 North American brown bear (grizzly bear) deaths attributed to poaching (page 70) in the Cabinet–Yaak and Selkirk ecosystems of Idaho, Montana, Washington, and British Columbia. During the same period 14 grizzly bears were killed due to unknown human intervention where no clear proof of motive was available. These statistics are higher than the number of bears killed in self defense or as a result of legal hunting.

I guess the good news for the usa is only 8 poached bears over 20 years.

Is that info about CITES app. 1 protection accurate? I checked on the US species of grizzly, brown, and black. all are considered "least concern" per Wikipedia....

I don't think cites is right fir bear in USA. Heck you hunt black bear in many states with an over the counter tag.

I know having black bear on the list is almost laughable given their population numbers. I wonder if they are the list due to the "medicinal" demand of their parts.

The first line of the "factual" statement provided by the poaching facts folks is BS and in error.
Note CITES classification screen shot below.

CAustin said:
I don't think cites is right fir bear in USA. Heck you hunt black bear in many states with an over the counter tag.
Click to expand...

CITES controls trade and transport across borders. If I hunted a Black Bear in the US or you came to Canada, either of us will need an export permit. That's all.
Trading in Bear parts in illegal up here. You can hunt them and eat them, but there is no selling/trading parts locally or across borders.

Here is the checklist for Browns/Grizzly and Black Bear (American)

Black Bears have been on Appendix II since 1992. Note the three countries they are listed covers North America.

You just need an export permit from the country they are hunted in to transport them across a border.


Browns/Grizzly are a little more complicated.
CITES I only in a few countries - China, Bhutan, etc.
CITES II in 53 other countries including North American countries. 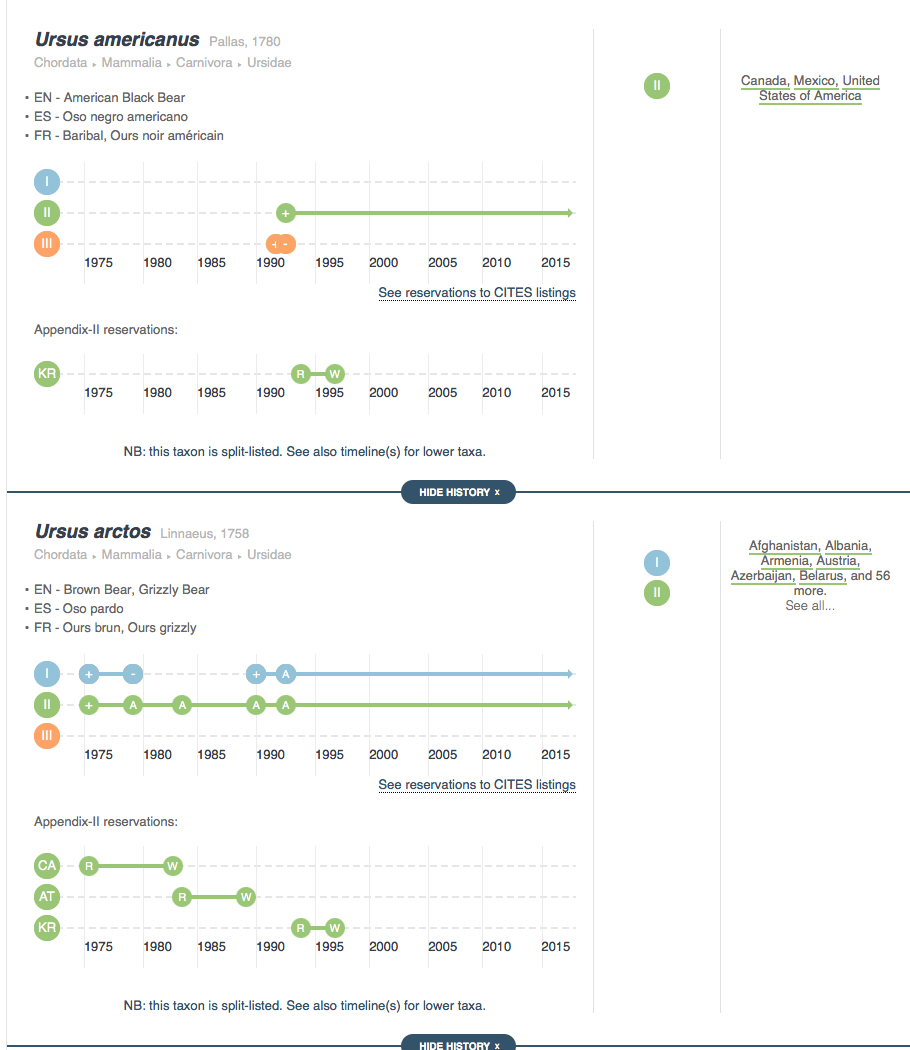 Thanks @BRICKBURN! always appreciate you bringing the facts.

I thought the article was suspect considering the source, bad grammar, etc
You must log in or register to reply here.

From Africa To Vietnam: The Flow Of Ivory Is Relentless

Elephant poaching in Africa falls but ivory seizures up