I must have missed it, did it have teeth.

TMS said:
I must have missed it, did it have teeth.
Click to expand...


AfricaHunting.com said:
Let's all refrain from calling anyone names. Lets keep this conversation on topic as it is an important topic. Let's try to remember that greater and deeper discussion of the issues can be had if we remain courteous and try to express ourselves and hear what others think without allowing our emotions to get the better of us and resort to lower sorts of discourse. We are all ultimately on the same side.
Click to expand...

@BRICKBURN , yes I did miss it, apologizes to AH members.

I think after the first couple of cows Frisk needed to go. Would have been nice if the people could of gotten a few thousand to pay for their loses. A hundred cows is ridiculous. I wouldn't put up with two. That was one expensive lion

Royal, you sure know how to play the trump card.....and not talking Donald.

Alexandro Faria said:
5) I refuse to bow to public pressure on this, when no one can provide me with logical reasoning as to why a man, native to the area, should receive the same criticism for killing a lion for protection purposes as a man who flew thousands of kms to a land that isn't his to kill a lion for the purpose of sport. It's not the same thing and it's by no means comparable.
Click to expand...

Alexandro,
I can't speak for anyone else but the way I personally see it, neither man should be criticised for killing a lion. Whether a PAC lion or a sport hunted lion, the result is a dead lion either way. The only difference to me is that the sport hunted lion provides an influx of cash to the local economy, not to mention the cash outlay supporting the people who make getting to Africa possible in the first place, IE airlines, travel agents, insurance companies etc.

While I am an american I am certainly not rich nor even wealthy and I most certainly hope I'm not an ass but it has been a dream of mine to hunt Africa and especially the "Big 5" since I was a child 50 years ago. I have been working toward that end most of my adult life, saving everything I could afford and sometimes what I really couldn't afford. The reality is that I will probably never get to hunt a lion or elephant let alone a rhino, but if I stay healthy for a few more years I might manage a buffalo and maybe a leopard if I'm really lucky.

As hunters we need to stick together and defend ourselves and our sport, not throw stones.

These are just my thoughts and opinions.

Gents, I find I usually agree with Enysse, but I can't in this case.

I hope all know that I fully support trophy hunting, as well as cat hunting, so please take that as a given.

Having said that, if I lived in rural Africa, with all of the disadvantages that life carries with it, and my wealth and my family's food supply was tied up in my animals - cows, goats, sheep, whatever - I would have very little tolerance for lions. In fact, so little tolerance, I would likely try to get rid of local lions myself, or help whoever wanted to do it to do so.

In North America, farmers and ranchers complain - with good reason - when wolves kill livestock. In fact, many in the US have fought the re-introduction of the wolf into old ranges for that reason. But at least in Alberta, where I live, and I expect elsewhere, when a livestock killing is shown to be caused by wolves, compensation is available to the livestock owner. That is almost never the case in Africa.

There is also the problem of killing animals in defense of life, something we in the developed world almost never have to contend with. However, when lives are threatened here, we will take out an animal. That sometimes works in the third world as well, but not always. Imagine if your child went out at night to pee and never came back? These are not coyotes we're talking about.

To call this poaching is, I think, to bring a first world perspective to third world challenges. I would prefer to reserve the term poacher to those who illegally kill animals for fun and profit. Those who take a deer out of season for the head, and waste the meat. Those who kill a rhino for the horn. Or an elephant for the tusks. Not for those who take out animals in defense of life or livelihood.

I think we, as hunters, should support a system which would say to rural people that we will (financially) support the payment of compensation if your animals are killed, as an alternative to killing the predator. Or, we will relocate the predator or simply kill it if necessary for the protection of life. I know this is called PAC in many parts of Africa, but if the system worked as it should, there should be very little need for villagers to try to take out the offending animals themselves.

Hank2211 said:
...... I know this is called PAC in many parts of Africa, but if the system worked as it should, there should be very little need for villagers to try to take out the offending animals themselves.
Click to expand...

@Hank2211 , you spot on with your post. We often get told to sort out PAC elephants, usually we try just to push them back into the concession area for a few miles, we know this doesn't help much, as that is little ground for elephant to cover in a night and the smell of trees looaded with mangos is too much for the elephant to resist. But at least the villagers see it as though we are trying.

One elephant killed 4 people in 5 days, we shot him immediately, he had a broken tusk and infection had set in...

Another PAC elephant was on the spot call, we were following other elephants and walked into a bull, he wasn't acting normal and his head looked sunken and just not healthy, we shot him, when slaughtering we took 11 bullets out of him, some were old bullets, some homemade and some modern ammo. Proactive control before he also became a killer.

One bull just got bold that he would knock houses down to get the corn.

BUT, I have also seen the bad side of "PAC" control, where people have abused the system, just to be able to shoot more.

Some of the bullets we removed. 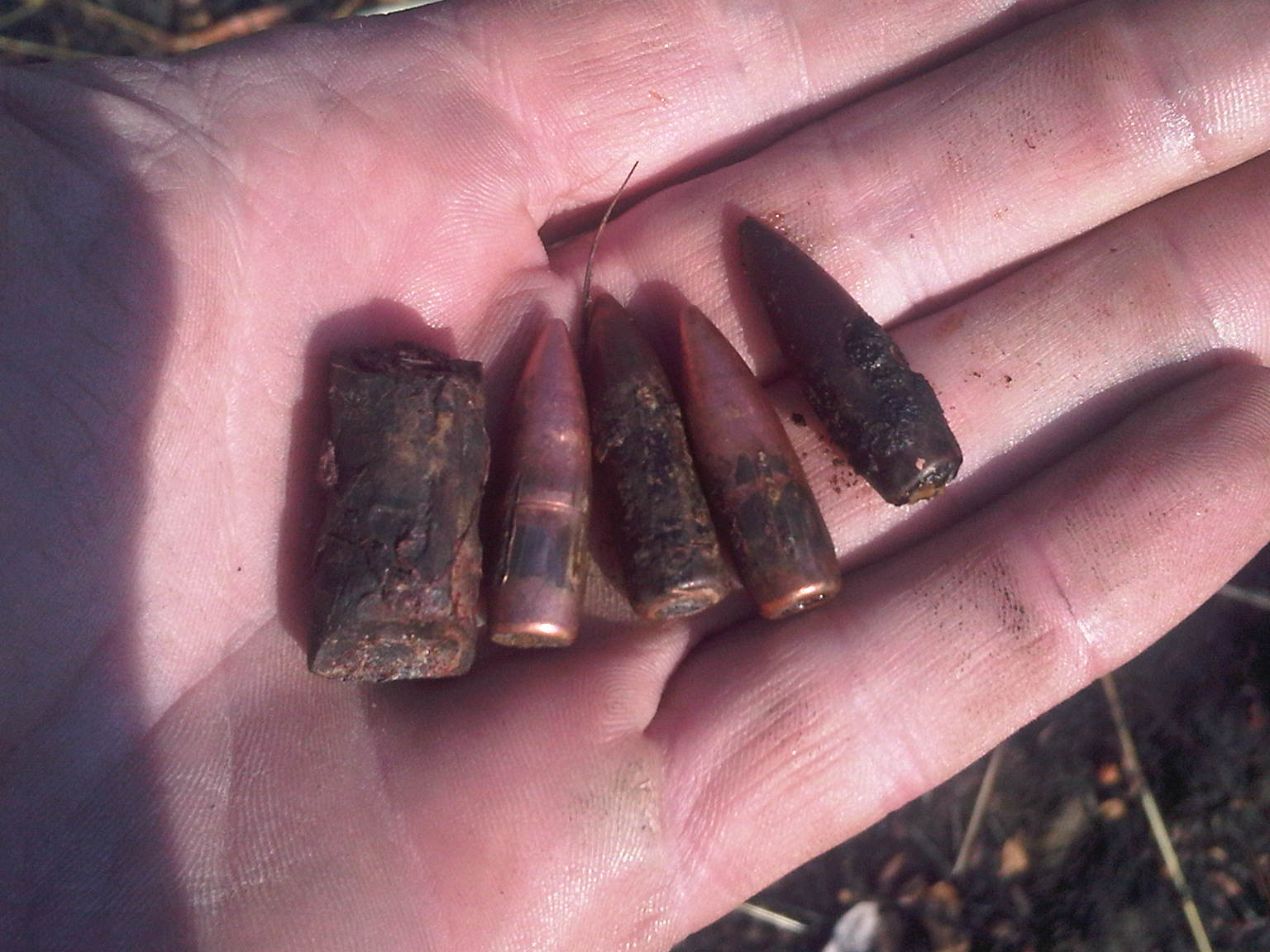 Simon I think this also illustrates why hunting is so important. Somewhat similar to the bears and cougars in North America. Hunting keeps some fear of humans in the animals, a good and healthy thing for both wild animals and humans. Let Cougars lose there fear of humans and they start snacking on soccer moms. I'm sure it is to greater effect with lions, but the African residents may not get as much press coverage.

I'm all for controlling PAC animals, especially if they have worn their welcome out.

But we wiped the grizzly, the wolf, the bison, antelope and the mountain lion to name a few animals in the USA down to next to nothing, because they were inconvenience many moons ago. Some have made a comeback....others are doomed to live in small territories. I was not in favor of bringing the wolf back at all. I knew the anti's would never want them hunted and would waste taxpayers dollars making lawyers rich all day. The anti's would use this cute animal to limit or shut down other hunting.

I didn't expand on my answer before because of my limited time on AH, I work a lot of hours and sleep very little. But I think hunting should be used as much as possible to control wildlife populations for a number of reasons: economical, social and political reasons.

For the most part I'm not a kill it all personality, just because something is there and I don't like it. We should have valid concrete reasons for why we do things. And that is all I want say on the subject.

I know a lot of people from foreign countries say the USA should stay out of world politics and handle it's own problems. In a lot of ways, I agree 100%. We Americans don't have all the answers....
D

enysse said:
I was not trying to start a fight. But as a hunter, I have a HUGE problem with people poisoning or killing lions just because they are there, possibly causing a problem on property. They are killed and the whole world could care less. But if an white American goes to Africa and kills one it's a crime.
It seem all of the United States has determined elephants and lions should not be hunted by public opinions.....................
Click to expand...

Its the western world that was up in arms about Cecil, the rest of the world didn't care. Part of the problem I think is that many of these antis, protestors or people in general have a romanticized view of Africans as "noble savages" who are in tune with nature and won't kill an animal unless its absolutely necessary (i.e. for food or in self defence) and that furthermore they wisely manage their resources. While the wealthy white man by their reasoning is the living embodiment of the exploiter who is going to "rape" Africa of its animals and resources and is very destructive to the natural environment.

Now obviously this isn't the case. An African with AK-47s poaching elephants for ivory for the black (largely Asian) market is just as destructive to the environment as the largely white commercial hunters of the past century, who decimated elephant, bison, rhino, wolf, grizzly, lion etc... populations, were. Commercial hunting and hunting a species to extinction because it is viewed as a pest is destructive regardless of who does it. Now obviously strictly regulated sport or trophy hunting, removal of individual PAC animals, and controlled hunting in general is very different, but its something the antis can't understand.

I think in general people don't understand wildlife conservation concept, "if it pays it stays". People have this utopia view of world that animals and humans are friends, they work along symbiotically like in a Disney movie. That is very far from the truth. I was telling people today no elephant respects boundaries, especially if crops are easy meals. Same thing with leopards being contained by a fence. And lions do view people as food for the most part
You must log in or register to reply here.