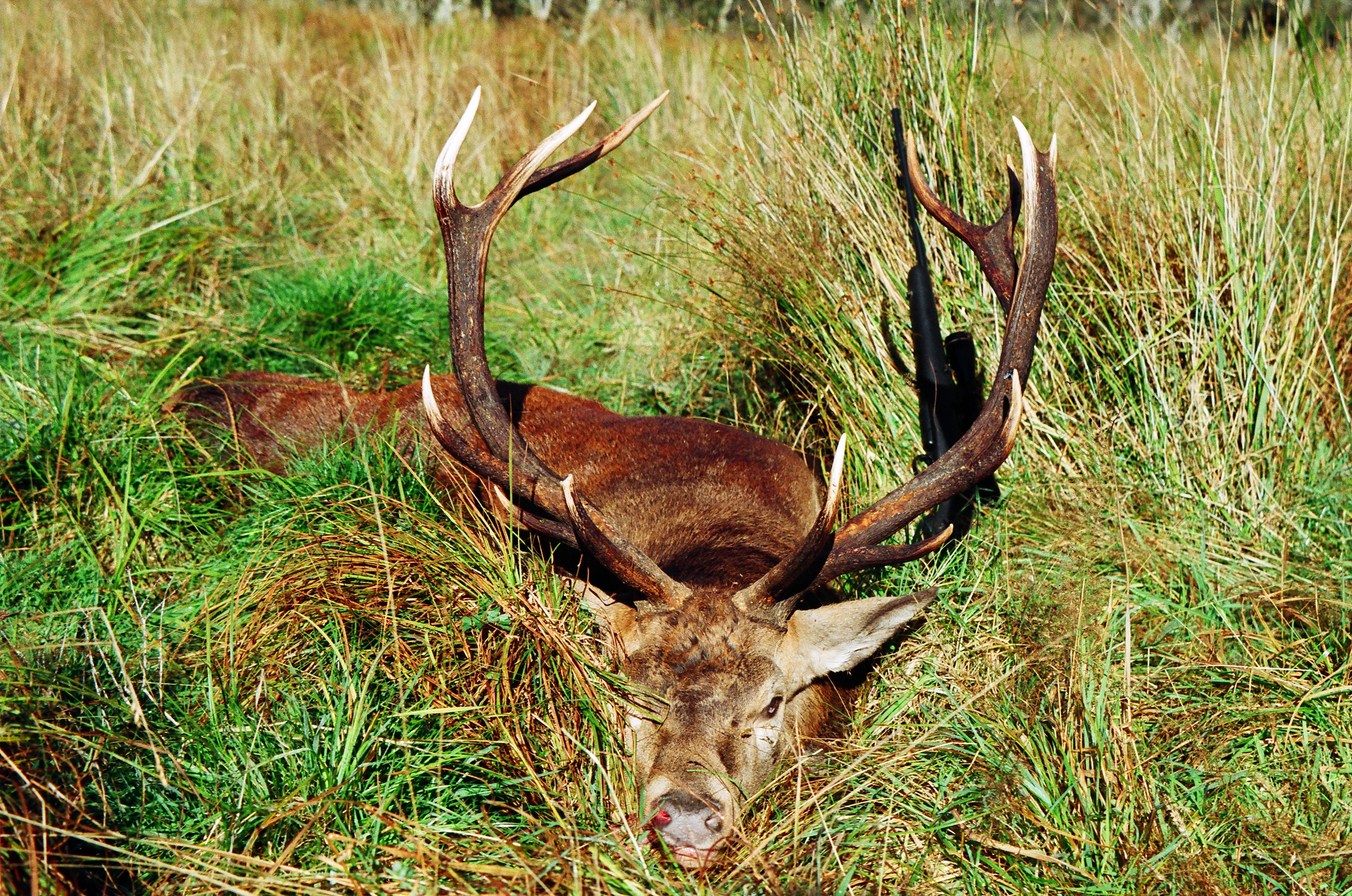 let me know the dates , its only a short swim from here

Time to mow the lawn.

Silence said:
...A good friend of mine is a horse rider and could not shoot at a zebra, it´s too much like a horse...
Click to expand...

My wife (a barrel racer, eventer, riding instructor and lover of all things horse) forbid me from shooting one. Once she saw them in the wild she realized they are nothing like horses and requested one for a rug. (I grudgingly obliged)


BWH said:
The far vast majority of all animals will leave you/me in the dust. Especially if shot at. That goes for a dog or house cat as well. I had 5 or 6 stand in front of me for an hour when I was there. And drove right past 3 more on another day. So no that really would not be much of a hunt for me.
Click to expand...

Depends where you hunt them. You can feed park sheep by hand from the window of your car (although your not supposed to) yet hunting a wild specimen is extremely challenging. Urban whitetails are the same yet few would say most whitetails are too easy to be a challenge ad not worth hunting.


enysse said:
I have no interest in shooting young immature animals, unless injured. Otherwise, everything is fair game, including pandas if they were legal.
Click to expand...

And if it would be beneficial or at least not harmful to them as a species of course.
Why we hunt, even lions? Real hunters need thriving wildlife, so we help make it happen. - Olivia Nalos Opre

I suppose all baby animals are in that list for me...

Varmints? Pest animals? Predators? They're not on my list of no kills.
"Every man dies. Not every man really lives". William Wallace

First off, I agree with everybody else on here who has no issues with anybody hunting legal animals. If it's something that you love to hunt and is legal...fill your boots and congrats! I also enjoy reading your hunt reports, even on animals I have no desire to hunt. That being said there are a few that I wouldn't kill myself, even if I could afford them:

Elephant. I can't really explain why...could be because to me they seem like they are nearly as intelligent and socially emotional as us? Could be I'm just crazy in the head. And they have to live so long to reach trophy size that it would make me sad to kill one. But I totally agree with the absolute need to keep sport hunting them and am thrilled for all who fulfill their dream to harvest one! Maybe someday I'll have a change of heart, but I doubt I'll have a big enough change of bank statement!

There are a couple of species that would be difficult for me to kill, but I would do it if necessary:

Rhino. Because they remind me of me...lol!

Cheetah. Prior to booking with Nick Nolte in Namibia back in 2013, I didn't even know it was legal to hunt Cheetah. While I was there in April of 2014, a neighbor saw 3 go through the fence on Nick's property. My PH and I were the last ones out that day and Nick asked if I'd go looking for these cheetahs and shoot one if possible. I told him that I wasn't interested in spending trophy fee money on one, thinking that would end it. Nick told me that if I got one, he would cover the fee for me as 3 cheetahs would reek havoc with his blesbok and springbok. My PH was really eager to go after them, and I figured I'd be doing Nick a favour so I agreed to go. While searching for them I definitely had conflicting feelings going through my head and was quite relieved when we couldn't find them.

Anything else, though I'm good to go!
"I don't need to shoot farther...I need to hunt closer." - G. Sitton

Elephant but only because in November 1989 I was in Kenya just after Arap Moi had had bit of a PR coup with the burning of the ivory. I visited Daphne Sheldrick's Elephant orphanage near Nairobi. I was led out into the bush. VERY small Ele wrapped in a blanket held on with a belt came up to me quietly and stuck his trunk over my nose and had a real good sniff. After he had checked me out he wandered off to play with he equally diminutive mate an orphan Rhino. It was quite magical ( and smelly!)

Having said that I would Hunt an elephant if I felt I could justify the reason.

Overpopulation (Botswana) springs to mind. If any one wants to sponsor me for that I will try and make myself available!!!

Hogpatrol said:
Varmints? Pest animals? Predators? They're not on my list of no kills.
Click to expand...

IDK I just think I find it much more exciting to hunt an animal that is no longer a baby and if I have such a choice why not to use it...

To each his own, I will shoot baby/young animals depending on the population control I am trying to implement. The only good type of varmit is a dead one, in my opinion.

For me it would be a lion. That might change some day, but I'm not sure I could pull the trigger on one.
Don't sweat the small stuff!
Aim Small - Miss Small

I wanted to ask this mostly because I was curious about if there were any kinds of animals that no matter how legal, you'd never want to hunt. This is in a scenario where no species are endangered. Personally, I wouldn't hunt any of the great apes. There's just something off about it.

I wouldn't hunt any Raptors, we have a Bald Eagle nest by our cabin at Sturgeon Lake in Alberta, I have spent hours just watching them. I find it very coming and just love these big birds. The other thing would be the great Apes.

I wouldn't hunt Chia Pets. Not much trophy value.
"Every man dies. Not every man really lives". William Wallace

Hogpatrol your missing out its fun to watch them explode.

Spooksar said:
Hogpatrol your missing out its fun to watch them explode.
Click to expand...

Hmm, now that you mention it, I'll have to put them back on my "kill" list.
"Every man dies. Not every man really lives". William Wallace
T

I would not hunt baby animals, female elephants that are pregnant or parenting, or gorillas.
J

Before my first African hunt , the only animals "off list" were primates. While we were in the Selous, a Masai woman's infant was snatch d and devoured by a troop of baboons (the baby was under a shady bush, just meters away from mother, who was harvesting yams. the only thing recovered was the swaddling cloth). I now have no legal African game I would't hunt.

As for young animals, in our area of Pennsylvania, unlimited anterless tags can be purchased. I shoot young-of-the -year whitetails , which are akin to a veal calf. I usually don't eat veal, because of the way its farmed, unless I know who raised it and how it was raised -easy to do here.

Location
In my tent, BC Canada

In certain circumstances there is no animal that I could not hunt and kill. But I have to concede that any animal that is truly endangered and where people are not hungry that species deserves to be protected.
Townsend Whelen - "The .30-06 is never a mistake".

Ego vir non tam multa.
You must log in or register to reply here.

Aardwolves and Civets, what is a good place with a lot of them?

The Largest Animal that Walked Ever Felled by a Gun

Francis W Chickilly
South Africa 2021
Today at 12:29 AM •••
F
Frank375 Philip Glass Frank375 wrote on Philip Glass's profile.
I am going to Tanzania the 1st of September and want to know what weight Darn Tough socks you recommend.Thanks,Frank.
Yesterday at 9:47 PM •••