The eastern part of CAR looks like Mopane veldt, although the trees were not Mopane. Every stream was covered by forest on both sides with savannah further away. It is flat country and the heat and humidity is heavy even at 10 000 feet above sea level where we were flying towards a bush airstrip in our hunting area.

The hunting area is 650km away to the East of Bangui, the capital of CAR. Our camp was on the Mé›ari that flows into the Bangui River before joining the mighty Congo River.

All these rivers are home to the Goliath Tiger and Vundu or Giant Catfish. Everything here is either giant or pygmy. Giant Eland, Giant Forest Hog, Goliath Tiger or Baits Pygmy Antelope and even Dwarf Buffalo roam here. This is a land of extremes. Even the weather plays along. It is either stinking hot or soaking wet. It is beautiful country that is vanishing from our earth because no one cares about another African country that is destroying itself.

The Sudanese killers that come into this place in groups of 70 to 100 with donkeys and camels don't poach. They slaughter. Everything with a pulse dies before the hail of AK-47 bullets. There are no authorities here to combat them. No one cares. To them, this is (no-mans land). The wet season from April to October is death season to all living creatures to supply the growing demand for (bush meat).

During the wet season, most animals congregate on the high ground where they are caught in a death trap for the genocide that follows. Even rats and frogs are killed. They are considered a delicacy in this ex French colony. Not even a Hyena is spared as its parts are used in the (muti) trade. This is something that is getting more common in all the African countries.

The world goes nuts when they hear of the Rhino poaching in South Africa but turns a blind eye and deaf ear to the thousands of Elephant, Hippo, Buffalo, Eland and Lion that is exterminated all over Africa. Bongo, Forest Sitatunga, Derby Eland, Elephant, Lion, Giant Forest Hog and Forest Buffalo are but a few species that are going to be extinct in a few years from now. There are no more Giraffe, Rhino, Cob or humans left in this vast area. It belongs to the Sudanese.

I had a heavy heart full of doubt and sadness when we left camp at 4;30 am on the first of our 21 day safari to try and bow hunt a Lord Derby or Giant Eland. We drove slowly to the first of many saltlicks to find fresh tracks. At the lick we saw that a herd of eland came during the night to get some much needed minerals from the soil. The grass and leaves in this area does not produce enough to sustain the animals that feed on them.

We were too late as the tracks showed us that they came early during the night. The dung was cold and dark and lost most of its moisture. There were also tracks of Western Roan, Sing-Sing Waterbuck and one Buffalo. Yawan got a strange look in his eyes when I pointed the buff track out to him. He has got the worst addiction for buffalo that I have ever seen. It is easier to take a rump steak from a hungry Rottweiler than it is to get Yawan to leave a buffalo.

At the third salt lick we found tracks that were fresh enough to follow. I immediately noticed that these wanderers did not wander around feeding. They were motoring and they did it with the wind. We followed them from 7am to 3pm and only once did they stop long enough to have a drink in a small stream. We eventually herd one eland bark like a Kudu when it got our wind and that was (game over). They simultaneously went into overdrive and trotted to the Congo or Uganda.

We were miles away from the truck and running low on water that was consumed by the gallon in the sweltering heat. That evening we hit the sack straight after supper so as to be ready at 4:30 the next day.

The Redflanked Duiker looks and behaves like a rat. They are sly and skittish animals because everything that eats meat is a threat to these tiny antelope. Smaller than a Steinbuck they offer very challenging targets that can string-jump a hand grenade.

We spotted quite a few dashing away while following the elusive eland. By accident we came upon a male that was unaware of us when we emerged from a forest gallery into the savannah. The rangefinder said 25y and the 800gr Easton DG 300 arrow tipped with an 180gr German Kinetic flew straight from the 80lb McPhearson series Mathews Monster. The little devil jumped the string completely and turned 180 degrees before the arrow hit him and put him down within 10 yards. We found the arrow 40y further. He was a beautiful old male and we were really proud to have something in the salt after hours of walking. 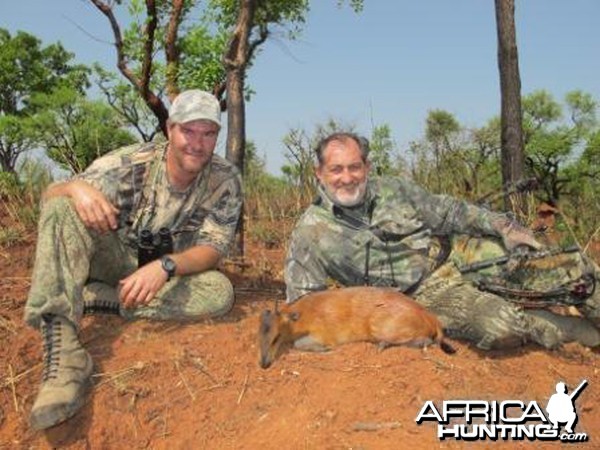 On the afternoon of day 9 and more than a 100km of walking we came to within hunting distance of a big herd of eland. We followed them since early the morning from a salt lick. We have seen many eland during the previous days and with a rifle the hunt would be over on day 3 already as we came to within 70y of a truly monster bull but as always the wind was not steady and he galloped away. Myself and Phillipe (the CAR PH) discussed the best approach to try and get to within 40y of the Eland.

We were navigating our way behind cover as well as trying to keep the swirling wind in our faces when we came close to this herd. There was one old bull and 3 younger ones within this group of 40+. They milled around and not once did one ever stand still for longer than a few seconds. This behaviour was typical of eland and more so of animals that gets harassed by constant poaching.

The old bull finally came to our side of the group and our excitement made way for panic as a huge Warthog male came walking right through the herd straight towards us. (Shoot that pig before he busts us!!) I whispered to Yawan. A split second later a Silver Flame broadhead went through his shoulder at no more than 10 yards just as he turned slightly quartering towards. He gave a high squeal and crashed away for 20y before collapsing. This got the attention of the old eland bull and he came closer to have a look at the mad pig. 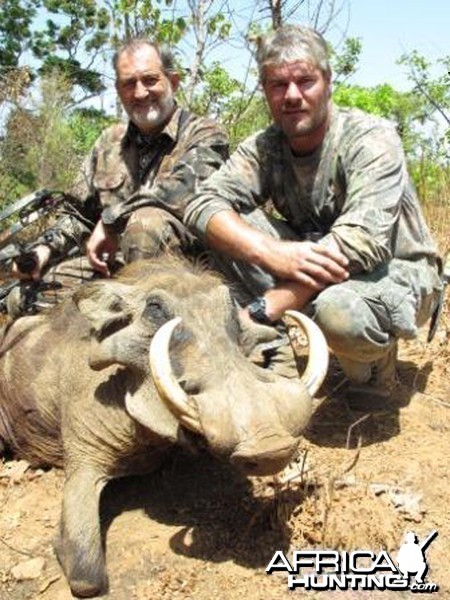 A second arrow was released in a flash that found the middle of the eland's left shoulder and exited on the last rib on his right side. It was hectic with all the action. The eland gave a short jump and ran in a small circle to give Yawan another shot at him in less than 5 seconds. We never found that 3rd arrow. I think that it is still in orbit as there was only one entrance and exit wound in the eland when we got to him where he went down a 100y away.

What a hunt it turned out to be!! Who could ever dream of such an outcome after all the hours that we walked in the tracks of these gigantic nomads. The right horn measured 50 1/2 inches with a circumference of 16 1/2. The left was just a touch shorter at 49 3/4 inches also with a 16 1/2 base. It was the new un-official world record for a bow. That did not matter at all as it is the specie that counts and not the tape measure. 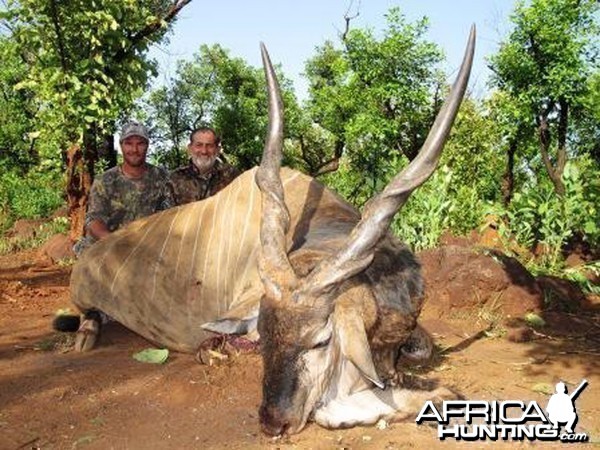 We were overjoyed that evening when we arrived back at camp. All the effort paid off in spades. Phillipe and me felt like we won the Lotto. Yawan had the biggest smile on his face because now we could go after buffalo.

It was with a sad feeling that I flew back home after our hunt. I do not know for how long those great wandering nomads will be available to hunt. I do know that it will end very soon if we as hunters do nothing to protect such a truly beautiful place. I fear that my kids will never grow up to see a Giant Eland in the wild. We are close to the end of an era.

Thank you again Yawan, for all the campfires that we have shared through the years.
Last edited by a moderator: Dec 1, 2016
You must log in or register to reply here.