Being able to accurately assess the greatest outside spread of a mature bull buffalo’s horns is an essential skill all aspirant Professional Hunters need to acquire. There is a good reason for this. Along with a 100 pound per side elephant, and a 60 inch kudu, a 40 inch or larger, ‘greatest outside spread’ buffalo has long been the Holy Grail of ‘record book-besotted’ trophy hunters – so being able to recognize what a ’40 inch buffalo’ looks like is imperative.

This impressive set of 12 year old buffalo horns has a greatest outside spread of 40 inches. The straight line ear tip to ear tip measurement of the cardboard ‘ears’ is 32 inches.

Sustainable utilization is a concept essential for the conservation of Africa’s wildlife, simply because it provides the economic engine which drives such activities. And it is thanks to this now well-accepted concept that perceptions surrounding the trophy record books are changing. To be ‘sustainable’ in every sense of the word, the offtake of a small percentage of any wildlife population for hunting purposes must be conducted in such a fashion that these activities are financially, ecologically and genetically sustainable.

To be brutally honest – in these modern-day times where hunting is increasingly under pressure from the numerous animal rights groups, the demise of the “trophy record books’ is looming. In any livestock breeding or ranching situation, a farmer or rancher will put his best, highest-performing ram or bull to his carefully selected, most fertile female breeding stock, cross his fingers and hope for the best! This is known as selective breeding, the reasons for which are primarily to improve economically important performance traits. For obvious reasons, he’ll also get rid of all the poorer quality males before they get the opportunity to breed. 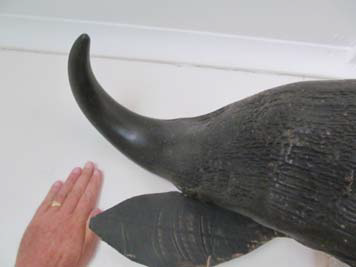 There is enough space to fit one hand’s width between the extended ear tip and the outside of the horn curve. If this can be done on both sides, it’s a good indication that the horns greatest outside spread is 40 inches. (32 + 4 + 4 = 40)

On the contrary, in a trophy hunting situation, the hunter invariably targets the best, most impressive looking, largest-horned males in a population while ignoring the supposedly ‘inferior trophy quality’ individuals. To make matters worse, many, if not all of the biggest and best-looking males are usually hunted while they are still in their breeding prime, or in some instances even before they have had the chance or opportunity to breed.

Removing from the gene pool all the better-than-average trophy specimens before their ‘superior trophy quality’ genes have been passed on allows bulls or rams of poorer trophy quality to breed and pass their ‘inferior’ genes on. Over decades, this practice has resulted in the inevitable – the gradual reduction of the population’s trophy quality.

Buffalo are by far Africa’s most popular dangerous game trophy species. They always have been, but for the past century or longer, trophy hunters have systematically been targeting all the biggest, most impressively horned bulls – and the consequences of such actions are now becoming increasingly evident.

Thanks to the wonders of modern-day technology, aerial photography in high resolution digital format and large crystal clear computer screens it is now possible to age and assess the trophy quality of all the sexually mature bulls in whole buffalo populations. Having an accurate idea of what is really out there, trophy quality and age distribution wise, changes the wildlife management ballgame completely because these techniques now allow wildlife managers to set, with genetic, ecological and financial sustainability in mind, realistic and achievable trophy quotas.

Part of a buffalo herd photographed from the air with modern-day technology. With the quality of high resolution images it is possible to age and trophy assess all the sexually mature bulls within such a herd.

It is generally accepted that well managed buffalo populations, in normal rainfall season times can withstand up to a 2% annual offtake without any detrimental long-term ‘sustainable’ effects, provided of course that the right class of bulls are hunted. The secret to sustainability then is to know which age and trophy size classes can safely be removed from a population without negatively affecting its genetic sustainability.

South of the Zambezi in 400 to 650 mm annual rainfall areas where buffalo naturally occur, such bulls become sexually mature in their fifth year but they will only be big heavy and strong enough, with a boss sufficiently hard to withstand the rigors of “test of strength” contests for dominance and consequently breeding favors by sometime in their eighth year. Such a bull’s breeding tenure lasts on average about three years. Bulls considered past their breeding prime are consequently those twelve years of age or older.

The buffalo bull aging process was discussed in a previous article. To recap briefly, by measuring the crown heights of the lower jaws two, first molar teeth, the buffalo’s age in years can be established. This information, when compared to other easily visible signs like boss development, horn tip sharpness, the extent of neck and shoulder muscling and the condition of the ears makes the live age estimation of mature buffalo bulls easy. With practice it is now possible to age live bulls to within a year. In some cases it is possible to get to within a couple of months. 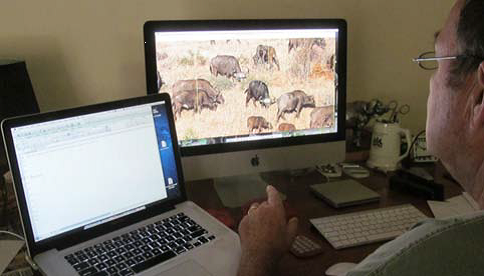 When the aerial photographs are enlarged to this size, all the sexually mature bulls are easy to identify, age and trophy-assess.

To ensure genetic sustainability, along with age, the only other estimation required is that of the greatest outside horn spread – and this too is easy to estimate accurately when one realizes that the straight line, ear tip to ear tip measurement on a mature buffalo bull when its ears are ‘pricked’ and alert, is between 32 and 33 inches. The width of a man’s hand is roughly four inches. This means that a buffalo bull with an outside horn spread that extends a hand’s width past the erect and extended ear tips on both sides will measure 40 inches (32 + 4 + 4 = 40)

As previously mentioned, a bull with a 40 inch spread or better has long been considered a real ‘trophy’. But if the truth be told, such bulls in most safari hunting areas are these days few and far between. In some such areas only 4 % of mature buffalo bulls now fit into this trophy size category. The vast majority of bulls now fall into the category of having a 36 inch spread or less.

So where does this put things from the perspective of genetic sustainability? This question was the driving force behind the recently formulated Greater Kruger National Park Hunting Protocol (excluding the Kruger National Park where hunting is not permitted). The protocol now states:

The following categories of Buffalo may be hunted: 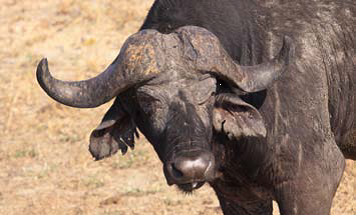 A ‘Classic’ trophy bull – at least 12 years old and with a spread of about 38 in. Bulls this age are usually loners and they will have led a full and hopefully reproductively successful life. Their removal from the gene pool at this stage of their lives will have no effect whatsoever on a population’s genetic sustainability. 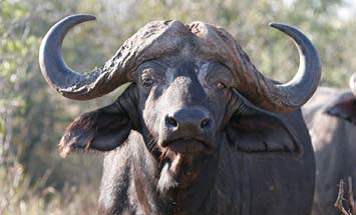 Bulls like this fall into the ‘Management’ category. This 8 year old bull has an estimated 35 inch spread

What this essentially means is that bulls with 40 inch or larger spreads can still be hunted – but only those 12 years old or older – in other words only after they have been afforded every opportunity to have led a full reproductive life.

The offering of discounted and younger, management bulls is an attempt to ‘right the wrongs of the past’. By removing such bulls from the gene pools before they get the chance to breed, and by allowing superior ‘trophy quality’ bulls every opportunity to pass their genes on, it is hoped that with time the trends of declining trophy quality in some buffalo populations can be reversed. Only time will tell if this will happen, but what is encouraging is that the will and the technology is now out there to make sure it does.
Gerhard R Damm
AFRICAN INDABA - Dedicated to the People & Wildlife of Africa
You must log in or register to reply here.

The Influence Of Trophy Measurement In Cape Buffalo