As usual the plane rides were lousy, 4 different planes going and coming. The arrival in joberg was a snap as we had our permits taken care of by Afton house far in advance. They supplied the greet and meet service as well as a great over night stay in their beautiful guest house. The service extends for the next day's flight out as well as meeting you when you come back and making sure you get back to the international side for your plane back to the states.

Ernest and Marita met us at the local airport and the gun case and baggage were cleared and we were on our way to camp. This camp was different from 2005's camp as Ernest had a more rustic design built, insuite showers and toilets but wall, s of the tent camp style with thatched roof's protecting the tents with hard floors. Like a tent safari. Quite exciting when the local pride of lions paid a visit.

The main purpose of this hunt was for an old lioness for me. Deena wanted a typical nyala bull if time allowed. The pride of lions that my lioness was part of had made a kill on a cow cape buff 4 days earlier and that was were we started our hunt. As we drove down the trail you could smell the kill before you saw it, two young male lions were guarding the kill when we approached it and took off into the brush. No sight of the rest of the pride. Ernest decided to steal the kill and move it to a better position for a later stalk. After this was completed we headed back to camp for breakfast.

As the distance from the lions was far away we were able to do some game watching on the way back to camp, at one point Ernest spotted what was a very good steenbuck for his area and I decided to go for it. We drove past and stalked back. When we were about 60 yards away we could see the female but the male was lying down and we played a waiting game. On the sticks waiting the male stood up suddenly and I had my first trophy. 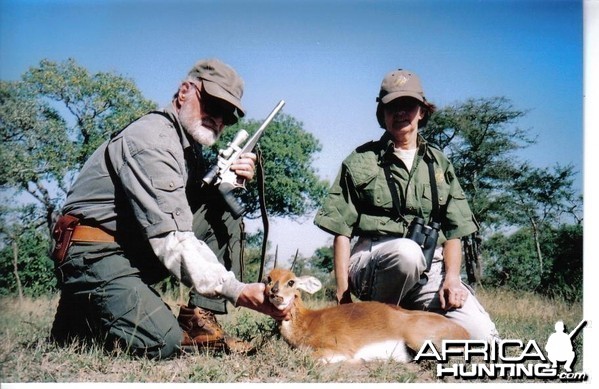 Got this nice steenbok with my scope sighted contender in 45-70, over kill but the only gun I had.

Back in the truck we made good time and saw that the pride had found the kill and finished it off. It now came a game of tracking to relocate this pride as they would not be coming back to this kill and Ernest stated that they would not kill again for 3 or 4 days as they were full. Each day became more reliant on the tracking ability of Ernest and john the head tracker. Time passed slowly but always full of excitement.

On one afternoon heading back to came we came across a beautiful nyala bull that Deena wanted. Ernest stopped the truck and he and she bailed out and started what became a very long but exciting stalk that ended with Deena taken a magnificent trophy bull nyala with ivory tips and a great mane. She has had great success with her scope sighted contender in 35 rem. 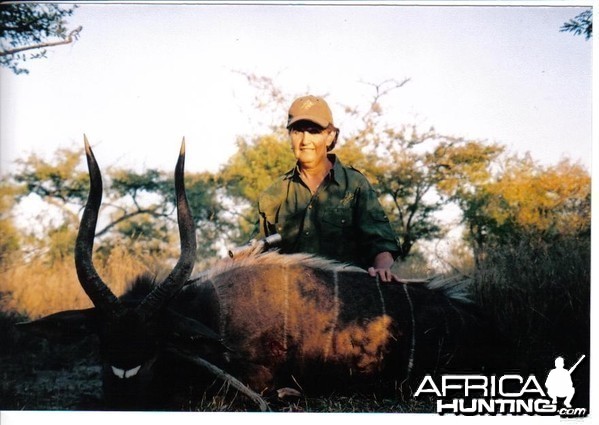 Deena took this typical nyala in 2007 with her scope sighted contender in 35 rem with spear safaris.

On the 6th day of the lion hunt we had found where the pride had crossed over to a different block so decided to try a stalk. We found them on three different occasions but they always knew we were there, busted. Ernest finally decided to put up a blind with a hanging bait. I shot an impala and the tracker cut out the guts and spread them behind the truck as we drove along where the pride had been walking dragging the bait. We hung it in a tree and set up the blind 50 yards away, and left for the afternoon.

About 4:30 we came back and prepared for a long evening wait. Not twenty minutes later Ernest said get ready. I looked to see where he was looking and right in the middle of the trail was the lead female lioness. looking right at us. Then the 2nd female strolled into sight, also looking at us. No doubt about it, we were being stalked. Ernest had connected a cable to the hanging bait and started yanking on it. This noise and movement became the focus of intention for both the lions. At that point the old lioness that I was supposed to take came onto the trail and started right for us. She was awesome.

More yanking by Ernest, now she was looking at the moving bait and stopped broadside for a few seconds. And that was when I started my squeeze. A clean one shot kill. Full penetration. She did three somersaults and with a continuous loud roaring she disappeared out of sight. The rest of the pride took off into the brush and all was quite except for a final sigh. I had got my lioness. All three of us had shaking hands. Ernest called for the truck to come up and we left the blind and went to find my lion. It took 4 of us to carry her out on a canvas stretcher. The usual pictures and congratulations took place and I just settled into a comfortable sense of success. 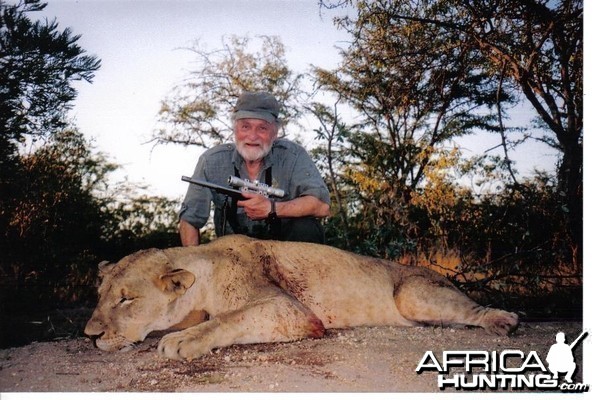 I killed this beautiful 300 lb lioness with my scope sighted contender in 45-70.

A full mount will be forthcoming. After that we just took it easy for the rest of the safari. On our last dinner we had the lioness back strap to eat as a first coarse, excellent, looked and tasted like chicken nuggets. Then the lost feeling of the safari being over, packing, back to the airport, goodbyes, and the long flight home and thoughts of next time, the fourth time around.
Last edited by a moderator: Dec 1, 2016
You must log in or register to reply here.