Spring fishing in the desert

Greetings Amigos, live from Roosevelt lake, Arizona.
Being Easter Sunday, and birthday Monday, I decided to get out of town for a couple days.
It's supposed to reach upwards of 97 degrees in southern Arizona, and what better way to celebrate, then to spend a couple days fishing, and enjoying the splendor of God's creation!

The spawn is on!

I'm an early bird, so I had everything packed and ready to go. I left my place at 3:00 a.m Sunday morning for the 3 hour drive to the lake. That included a short stop for breakfast in Globe, Az.

I was greeted by this when I arrived at the lake. 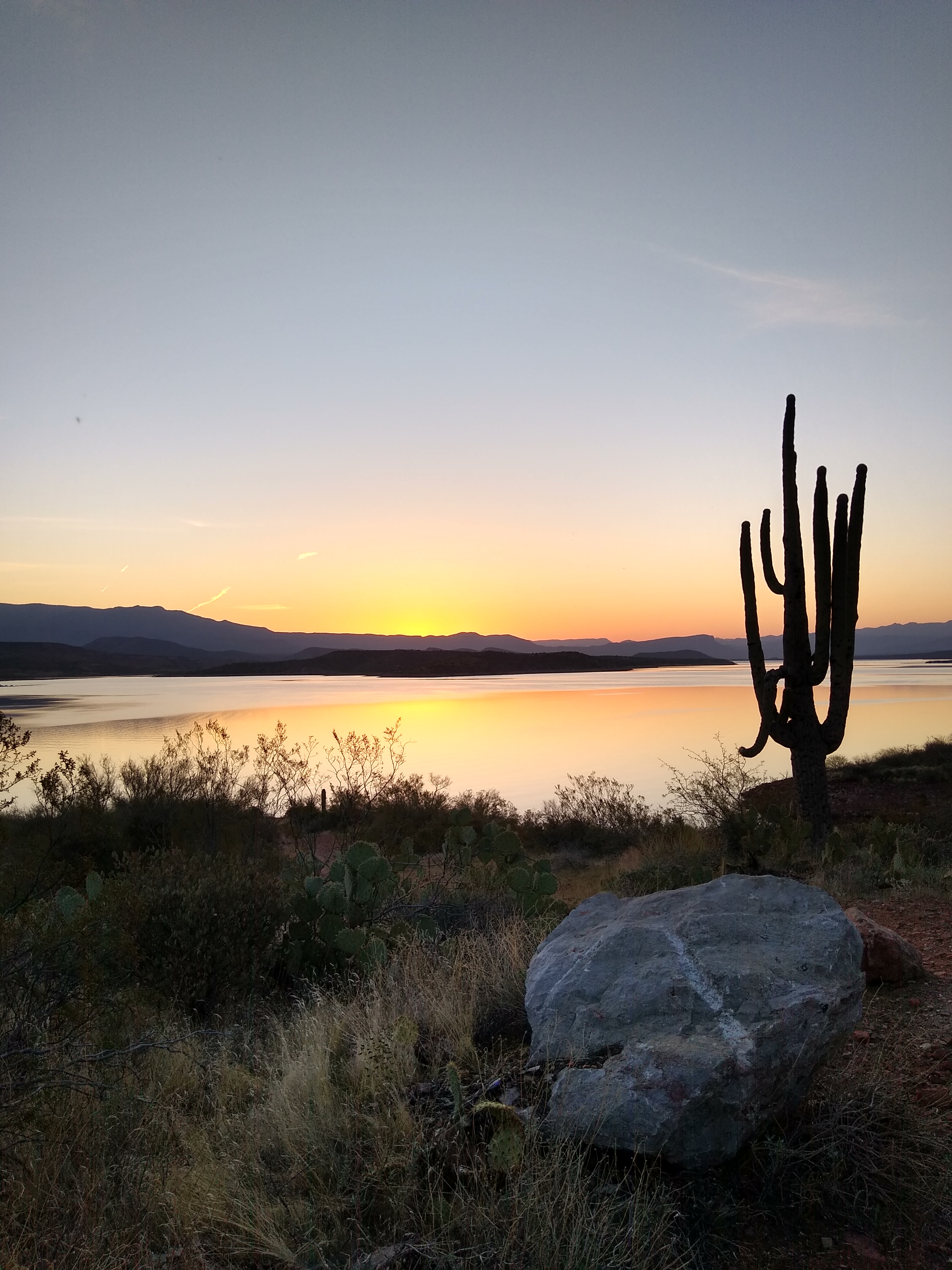 I got my poles rigged, and walked down to a point, with a cove on both sides. The water was almost glass smooth, and was begging for a top water bait. I put on a Rebel Pop-R. 30 casts later.....nothing! 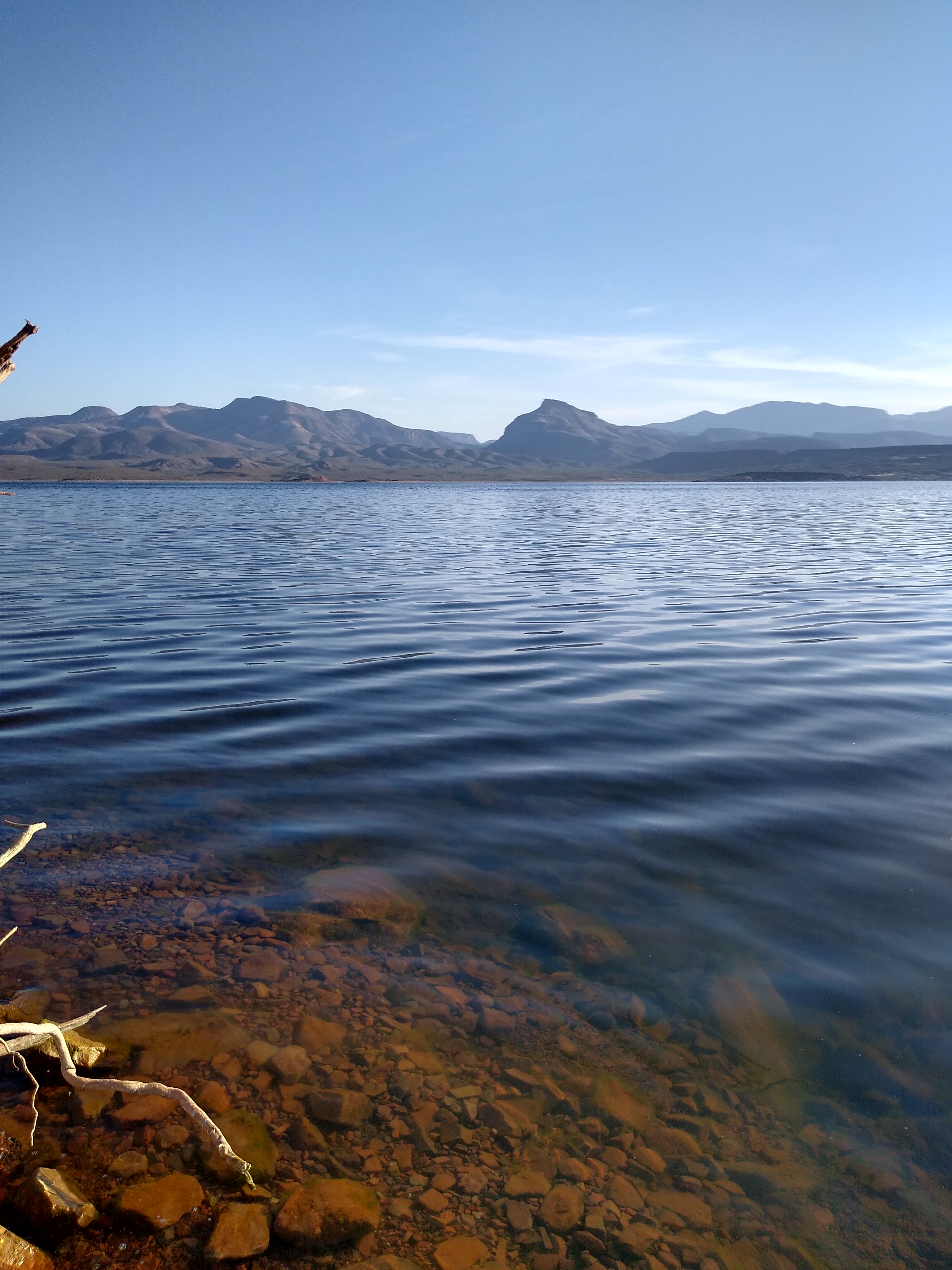 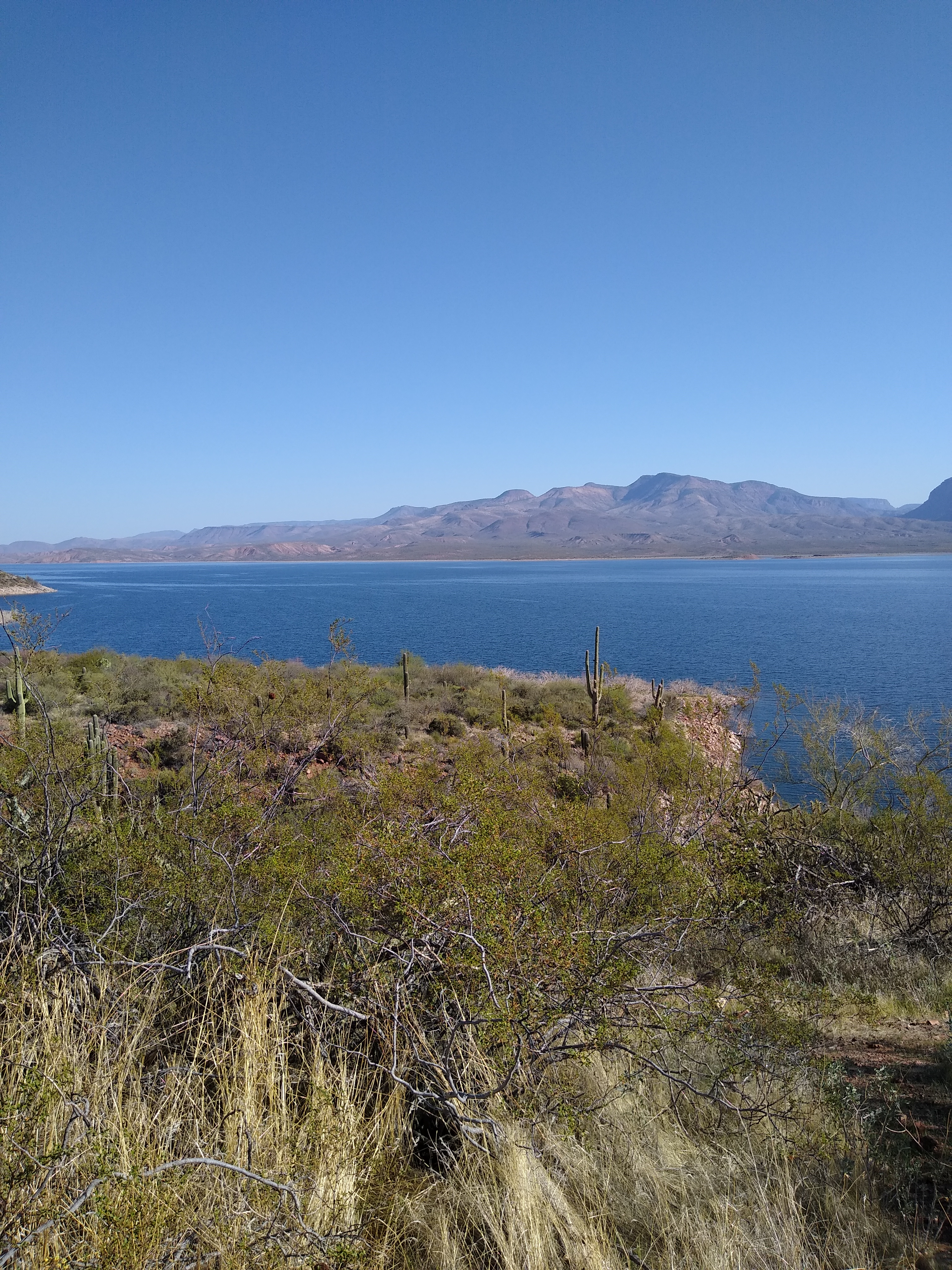 Switched over to a Texas rigged worm. Nothing!

Switched over to a Spinner bait, and did some slow rolling. Hooked one and lost it.

I decided to move to another spot I know of, and hiked down with my poles, and giant tackle box. Desperately trying not to tumble down the steep embankments...,while keeping an eye out for Rattlesnakes. I had put my Cabela's snake boots on at the truck, for piece of mind. 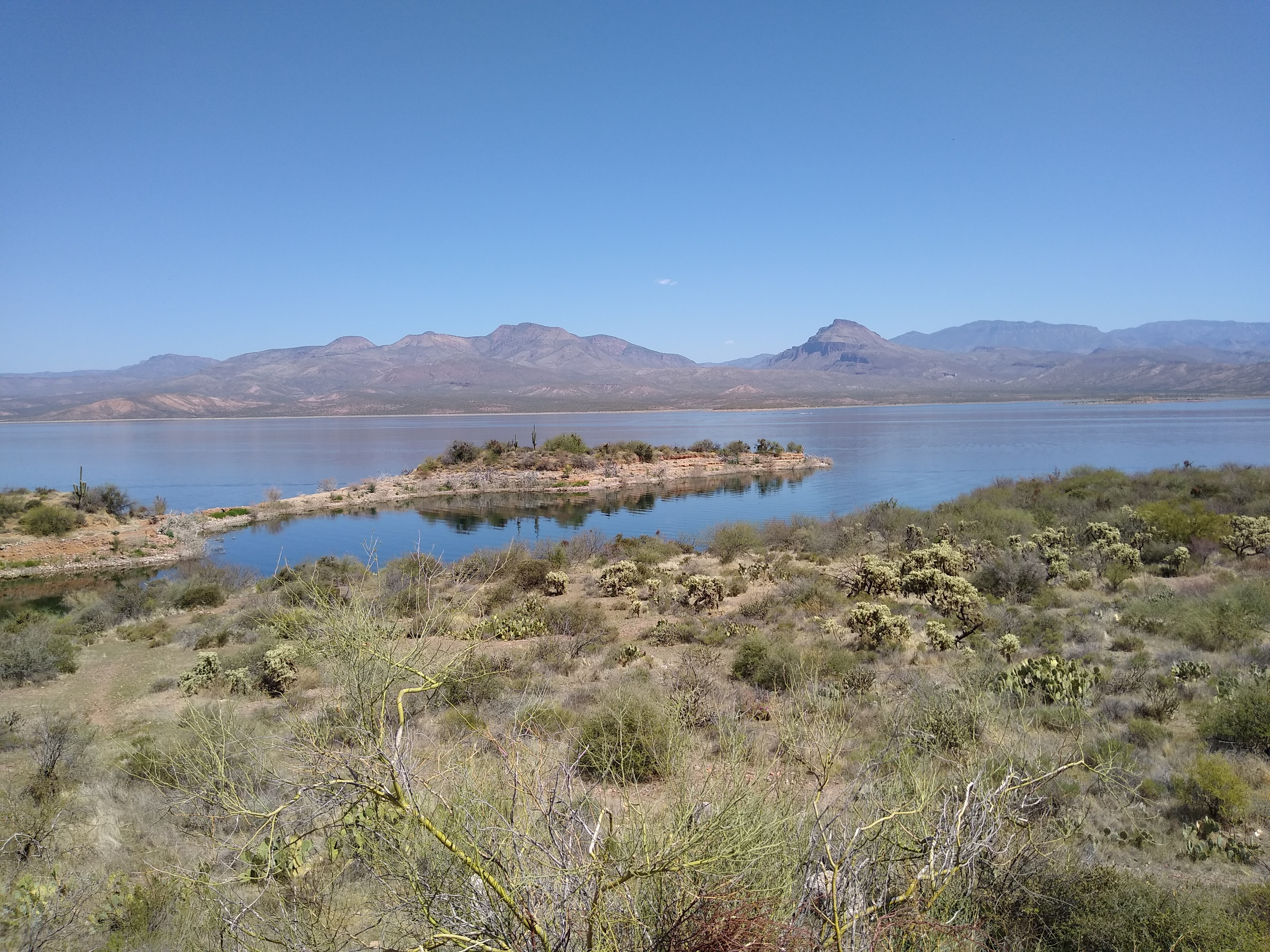 The coves were full of male fish, and you could see them swimming, and guarding nests.
I decided to change tactics, and put on a Berkley power Lizard, rigged Texas style.
That seemed to do the trick, as they didn't like a Lizard getting too close. I had thrown everything else at them, but the kitchen sink, and they wouldn't bite. 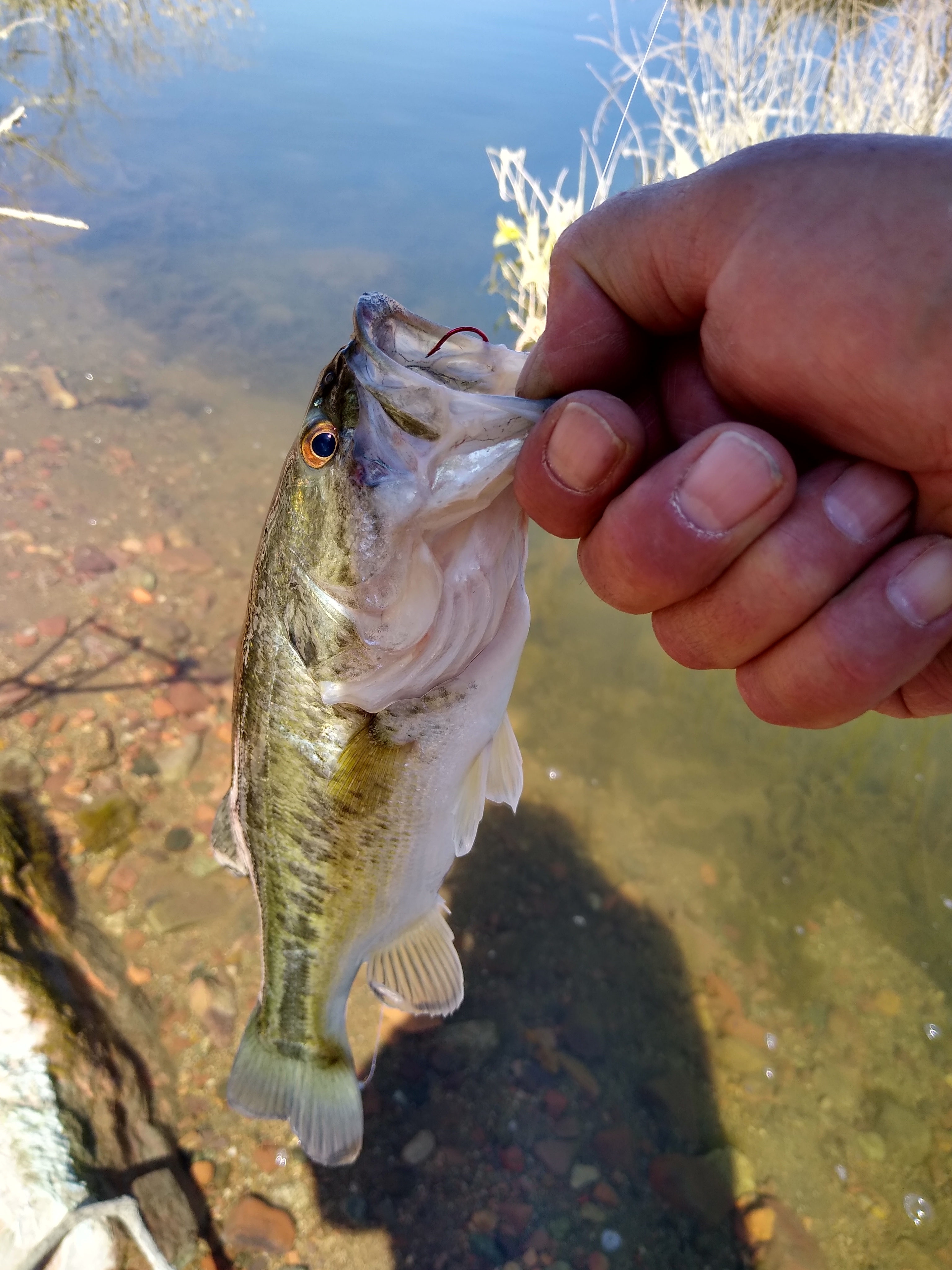 Most of the fish weren't very big, the biggest I caught today was about 2.5lb.
Not sure where the big females are? I need a boat.

Changed location to a steep embankment, and rip rap, not far from the damn. Started throwing a Rapala crankbait, in Crawdad color, and caught a few more that seemed to like that lure. 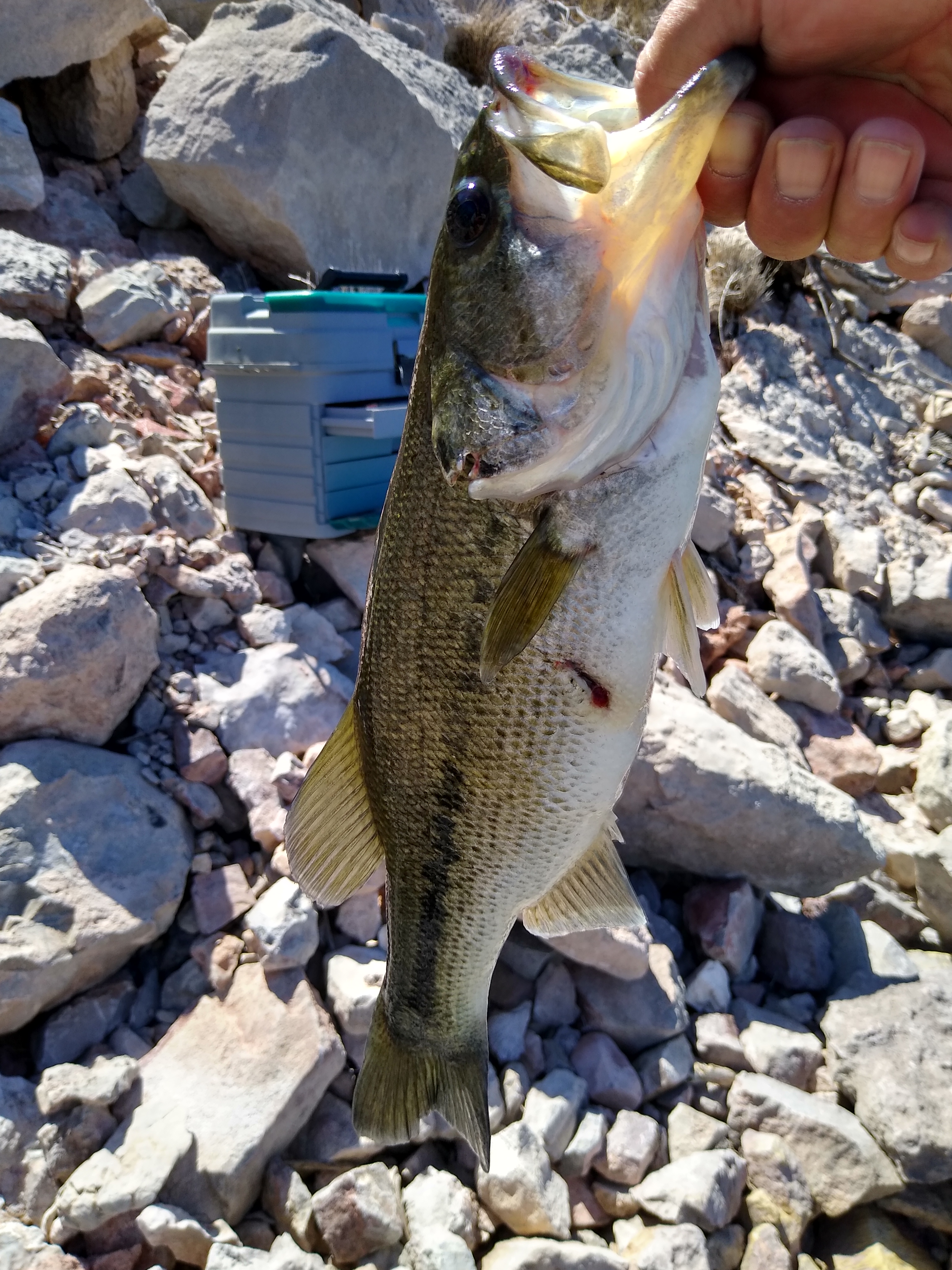 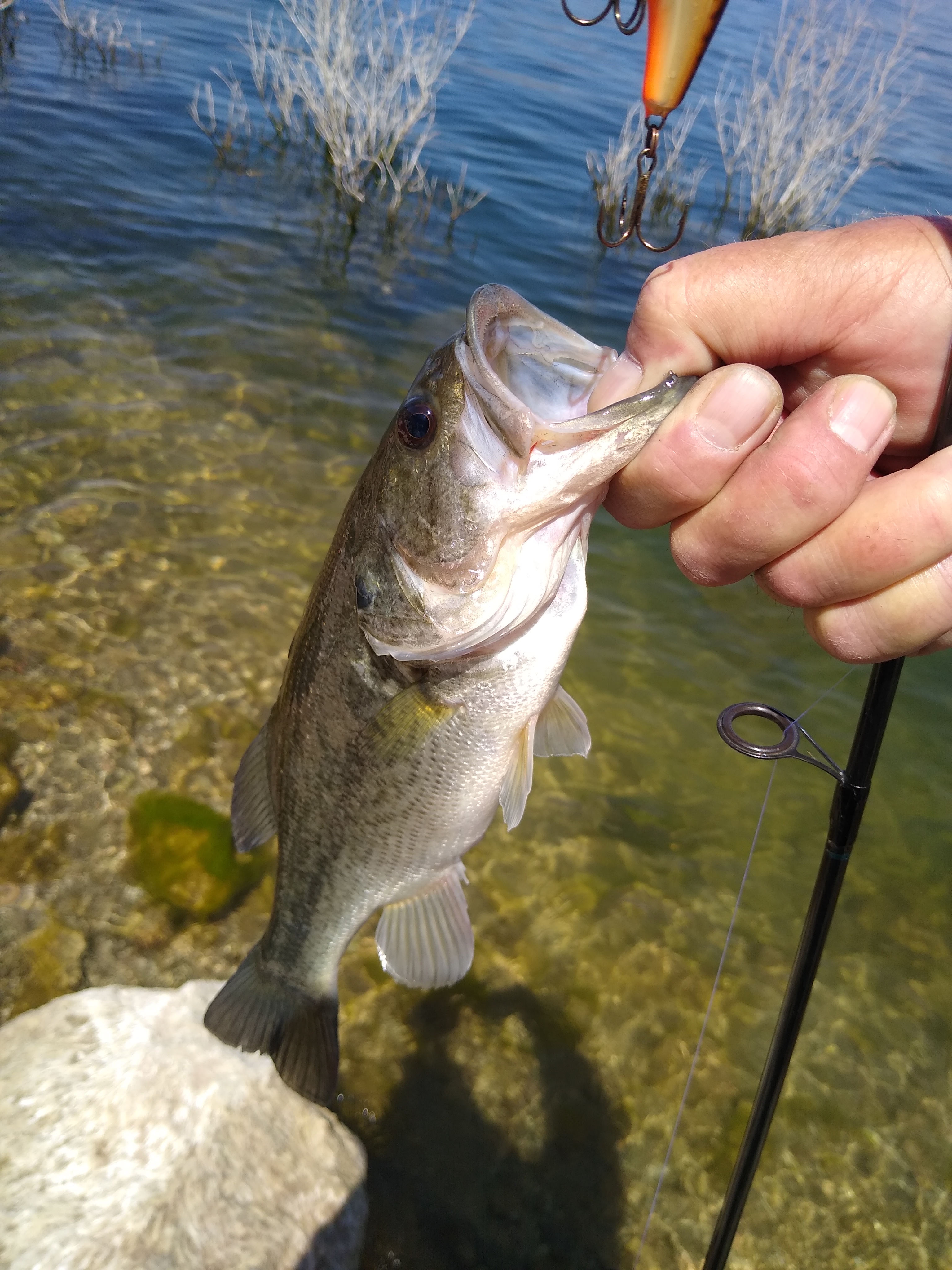 After 9 hours of fishing in the heat (94 degrees), I was tuckered out, and headed to the motel to check in.
The Roosevelt lake resort is a quaint little place, and the room is on $69 for the night.
Going to head over to the restaurant, and get some take out, after happy hour.

Will be fishing until noon tomorrow, and then head back to Tucson. Hopefully, I will find some bigger fish tomorrow. Being a Monday, the lake should be relatively quiet. It was pretty crowded today. 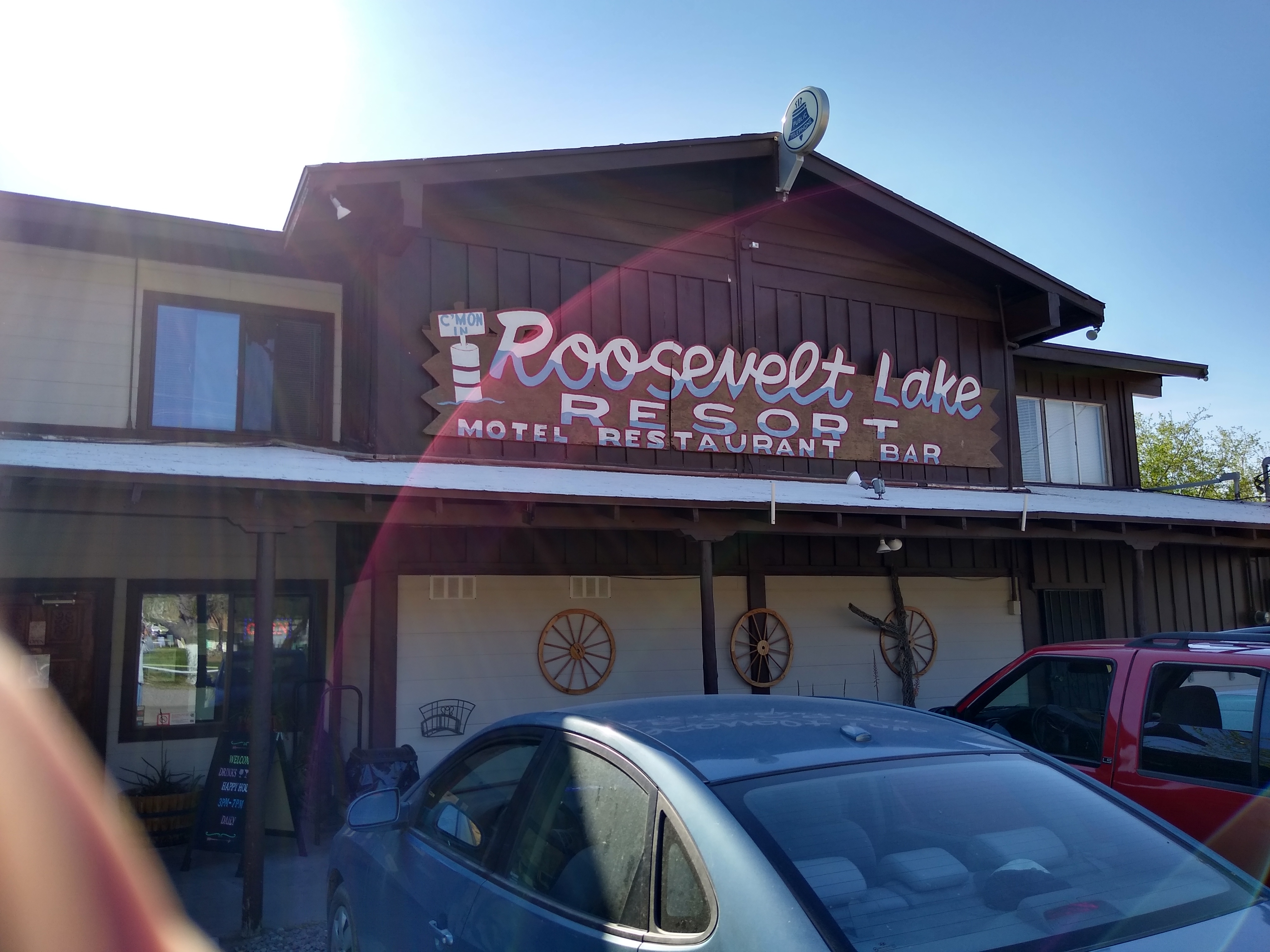 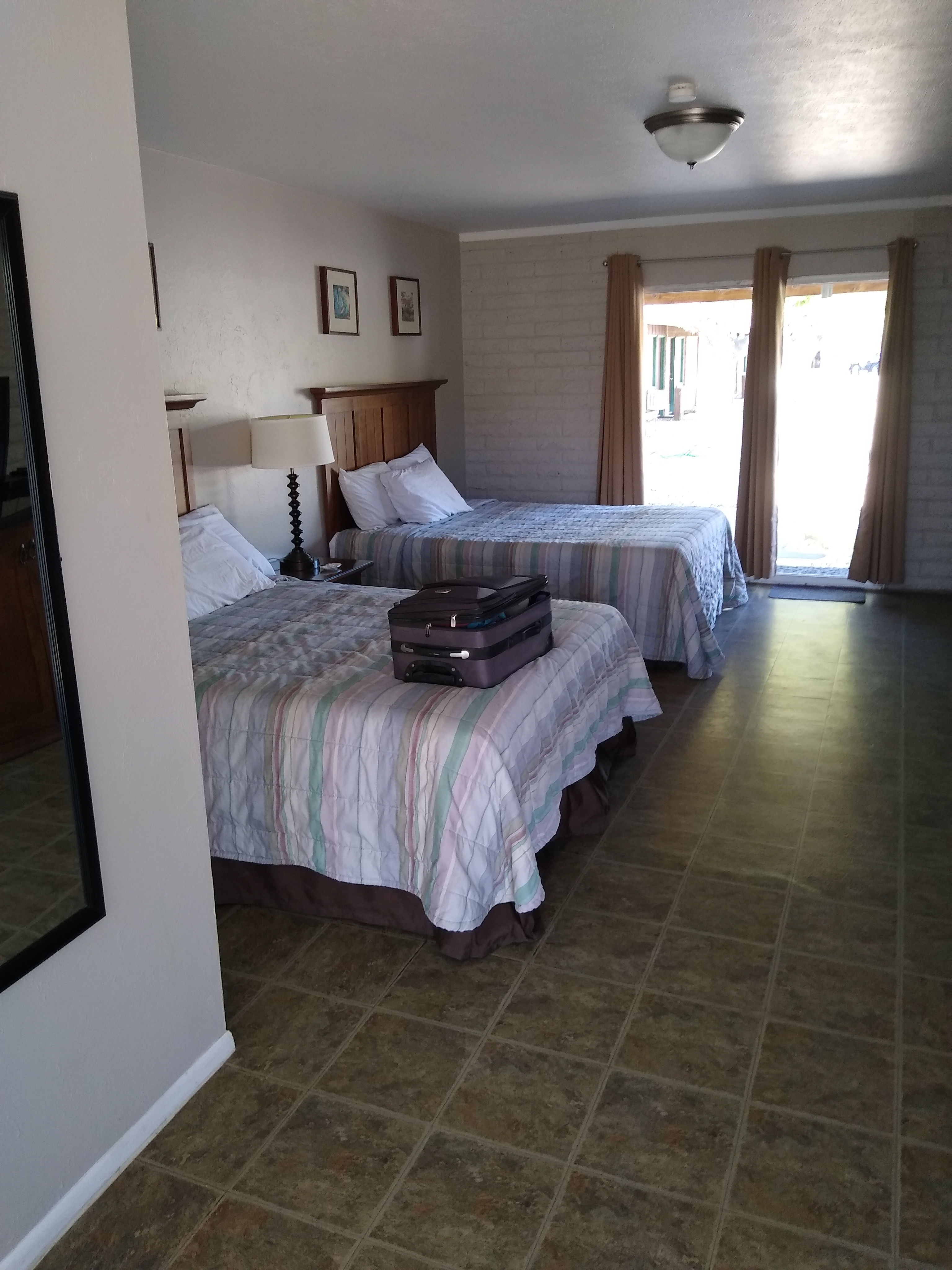 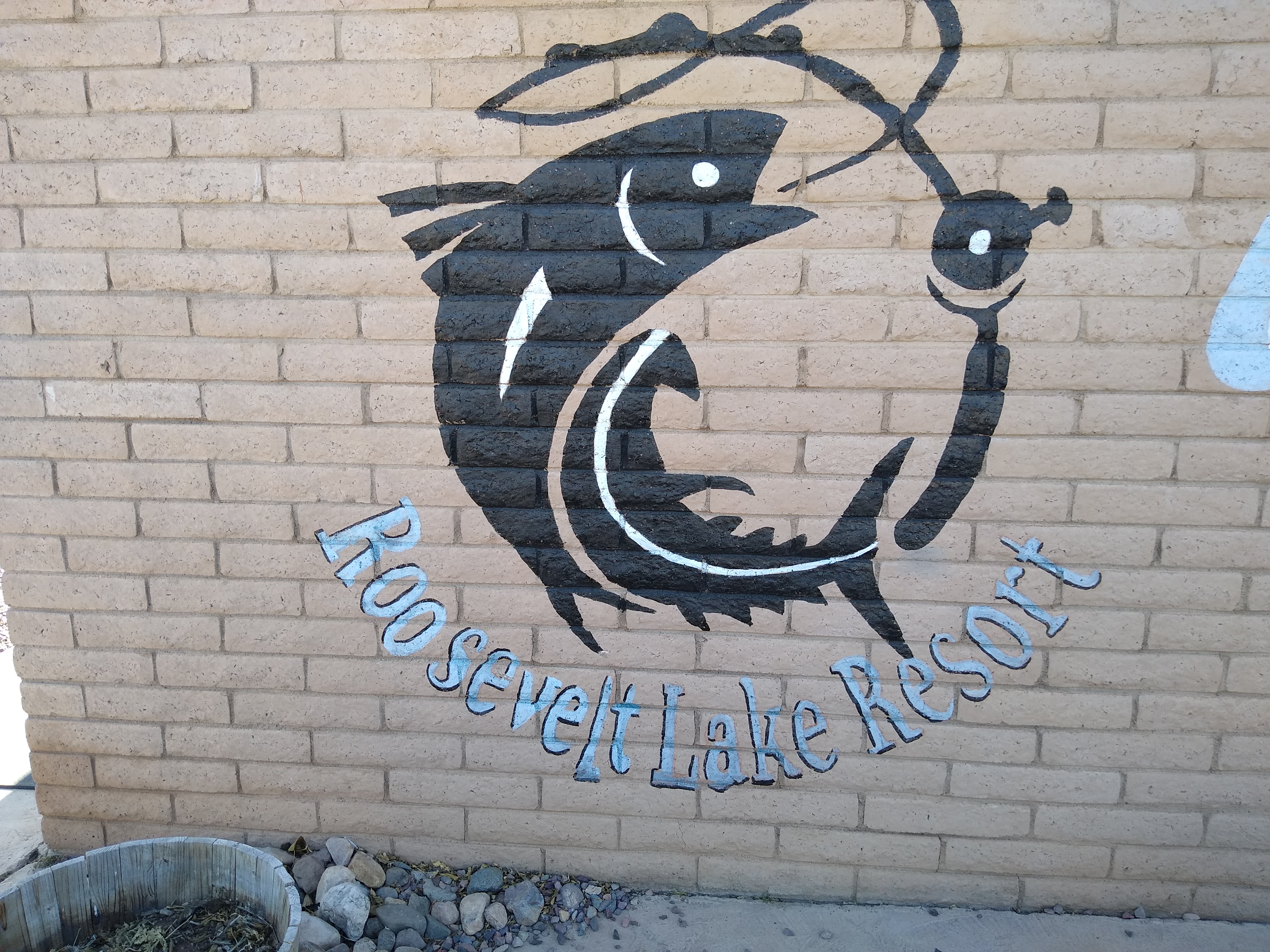 Well done and best of luck for the remainder of your trip!
People talking without speaking

Nice place to arrive for a day out chasing some fish.

I love the scenery. 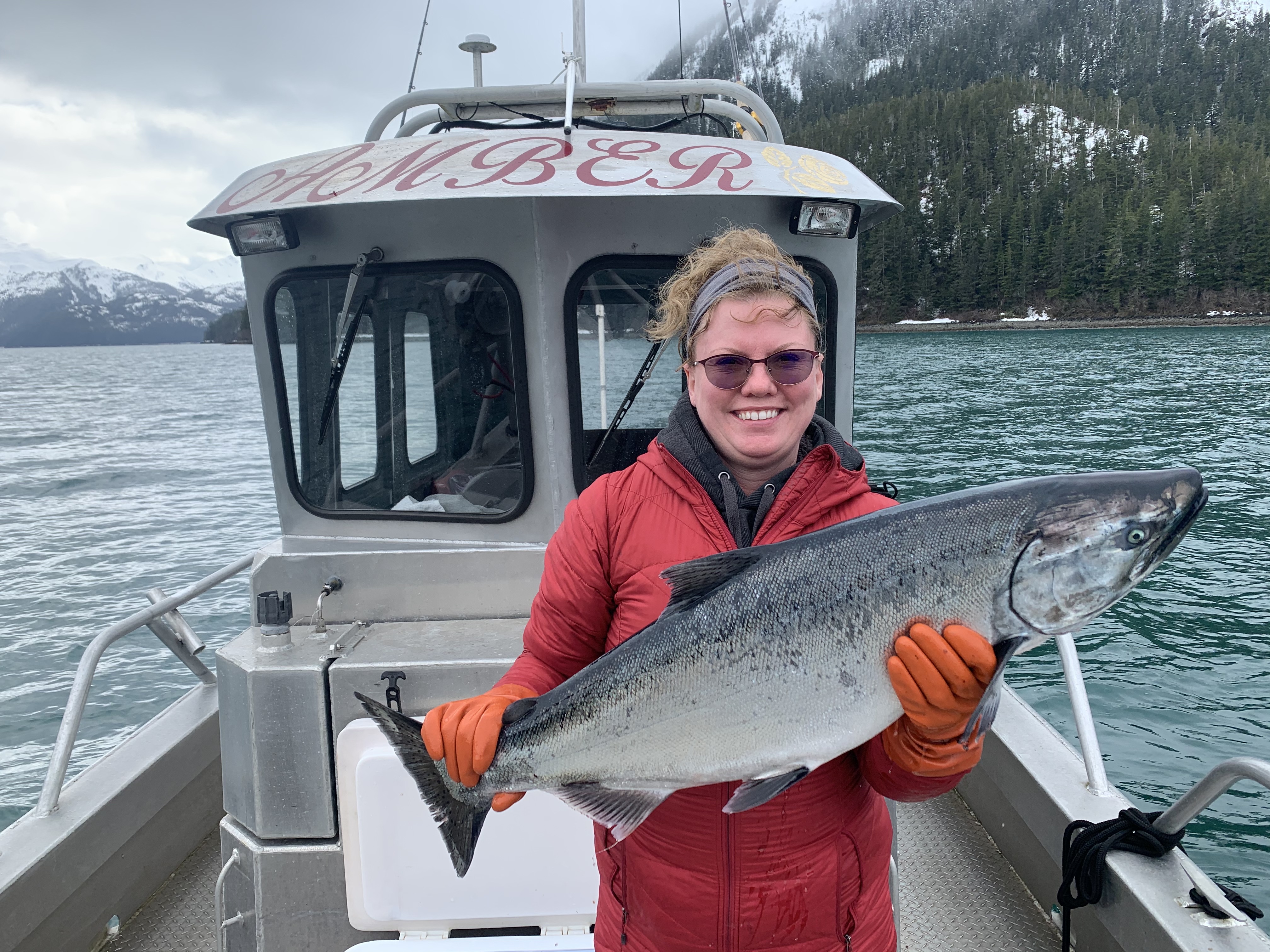 I’ve hunted some in globe and around Tucson-lots of good memories in that country, glad you are getting into the heart of it!

Nice to see water in Roosevelt! I rented a boat during my son's spring break a couple weeks ago and we fished Bartlett, north of Scottsdale. It was at the time the best bass fishing around. The lake was so low and featureless it was tough to decide where to fish. We nor anyone else we saw caught anything.

Yah you need a boat on Roosevelt especially when the crappie bite is on.

This morning Im down at the day use area of Cottonwood Cove. Ejoying some coffee and the cool morning....while it lasts.LOL
Lake is pretty quiet this morning, as most of the weekend crowd is gone.
Overcast, and slightly breezy.
Hoping for a good mornings fishing. 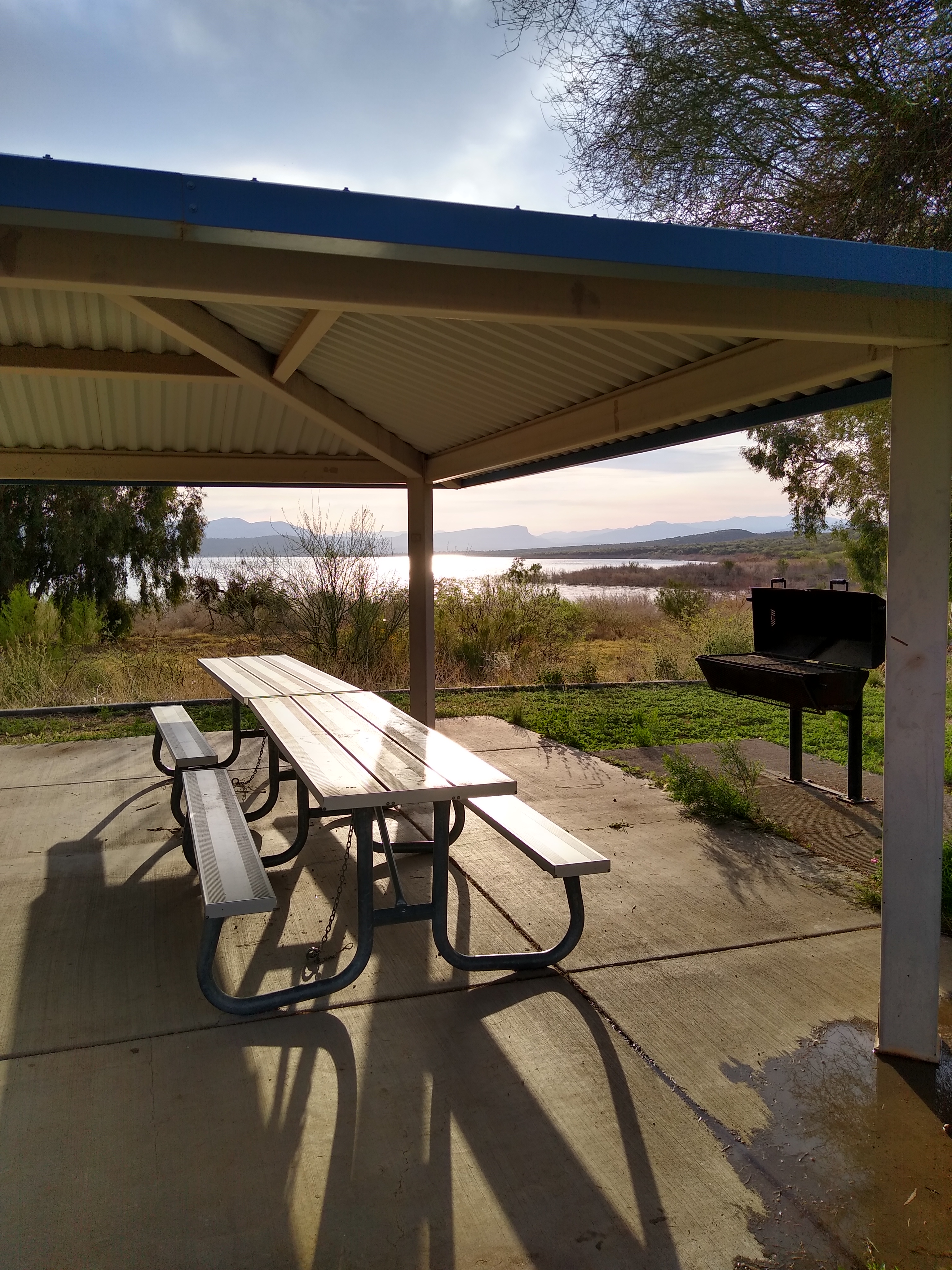 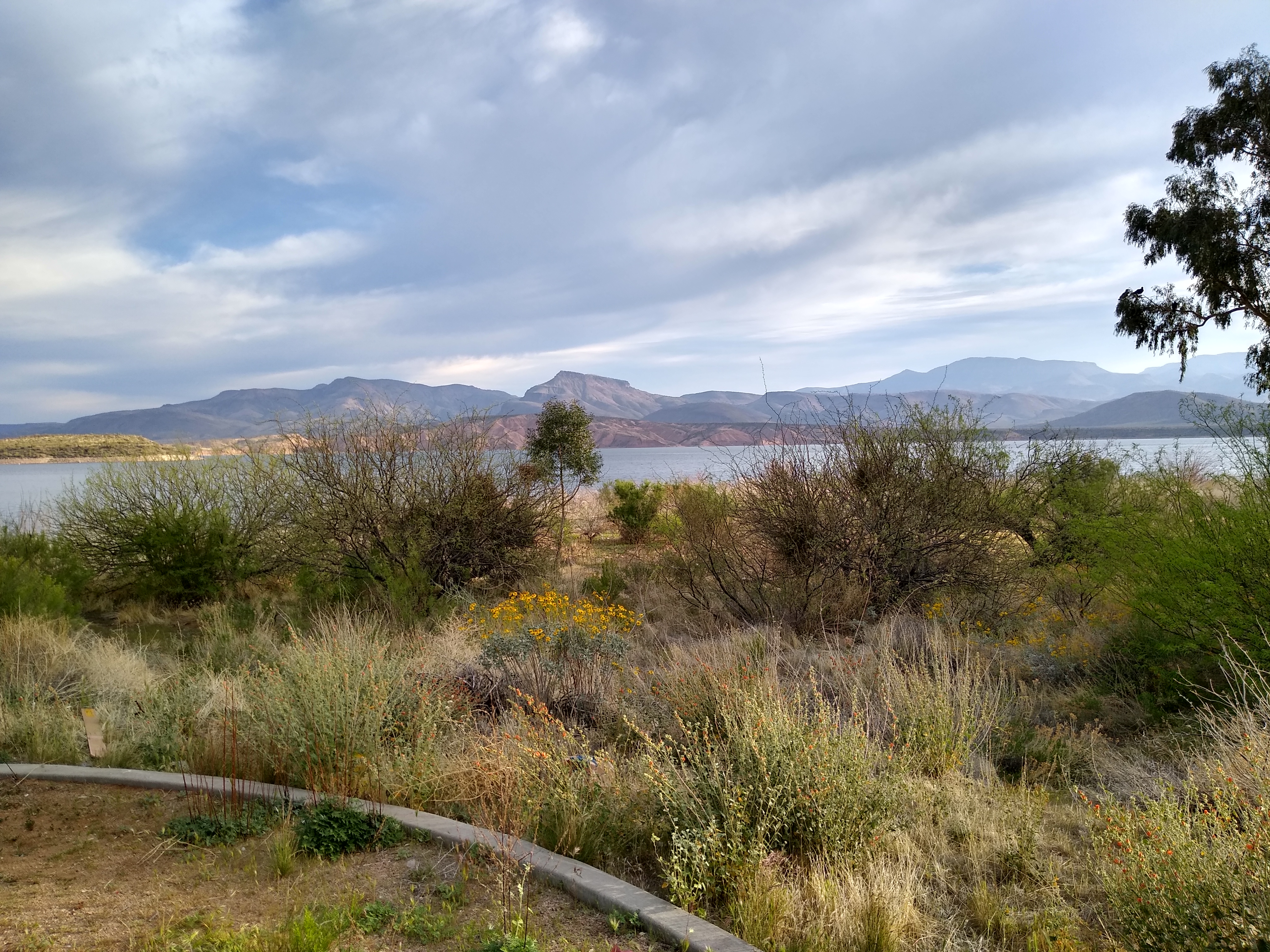 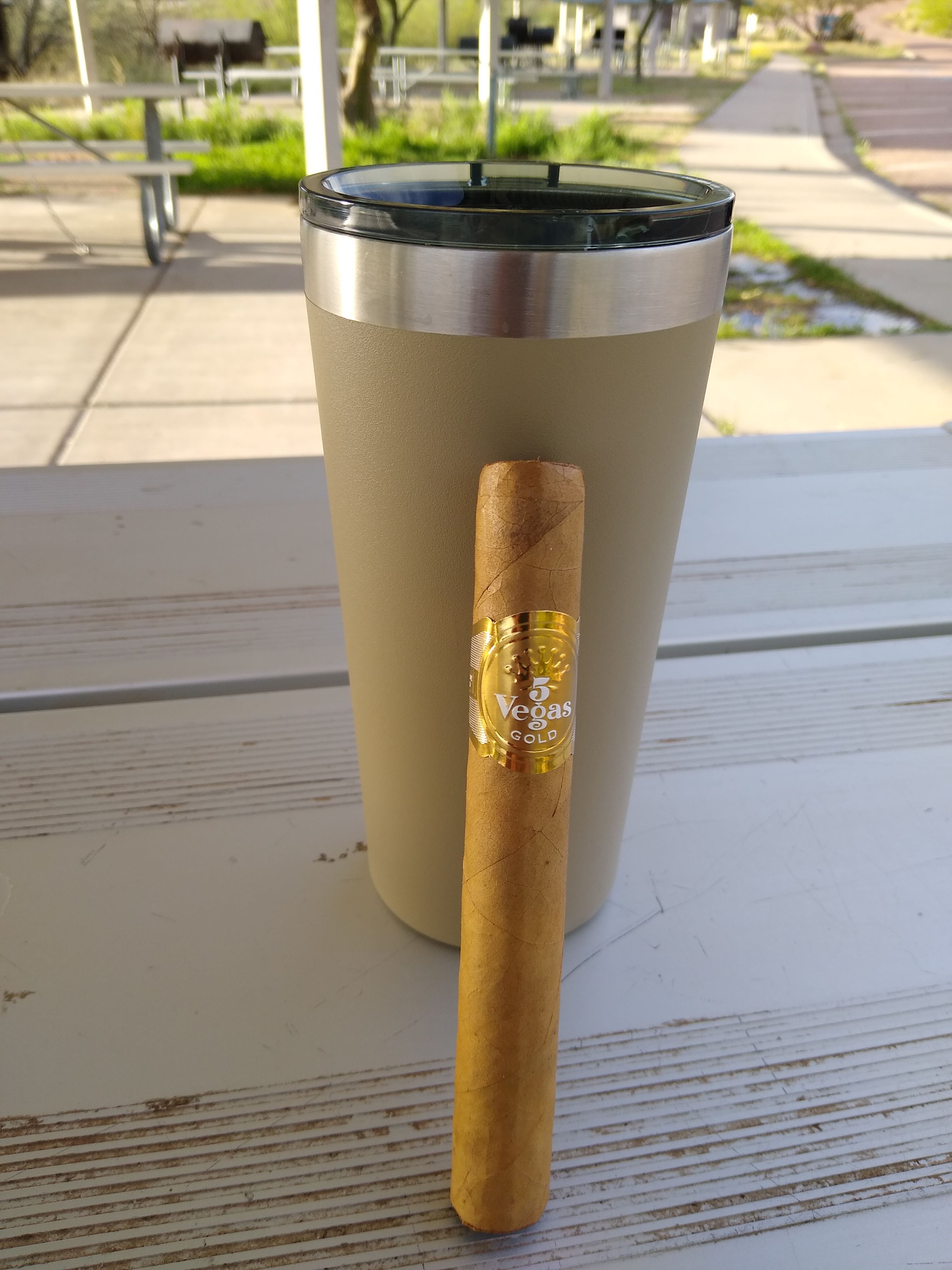 Crankbaits were the ticket this morning. It was a short bite. 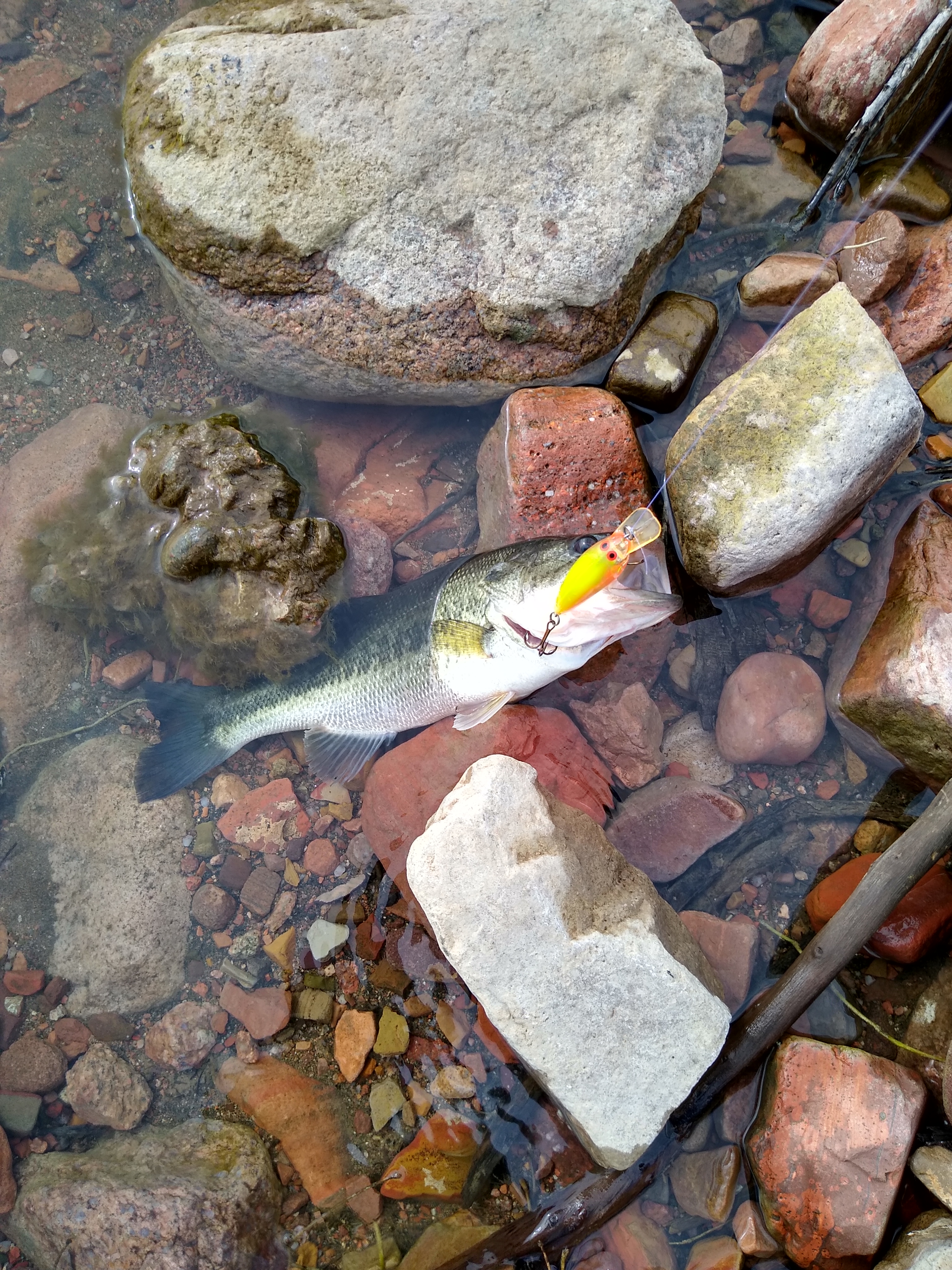 landed a couple, and lost a couple quality fish 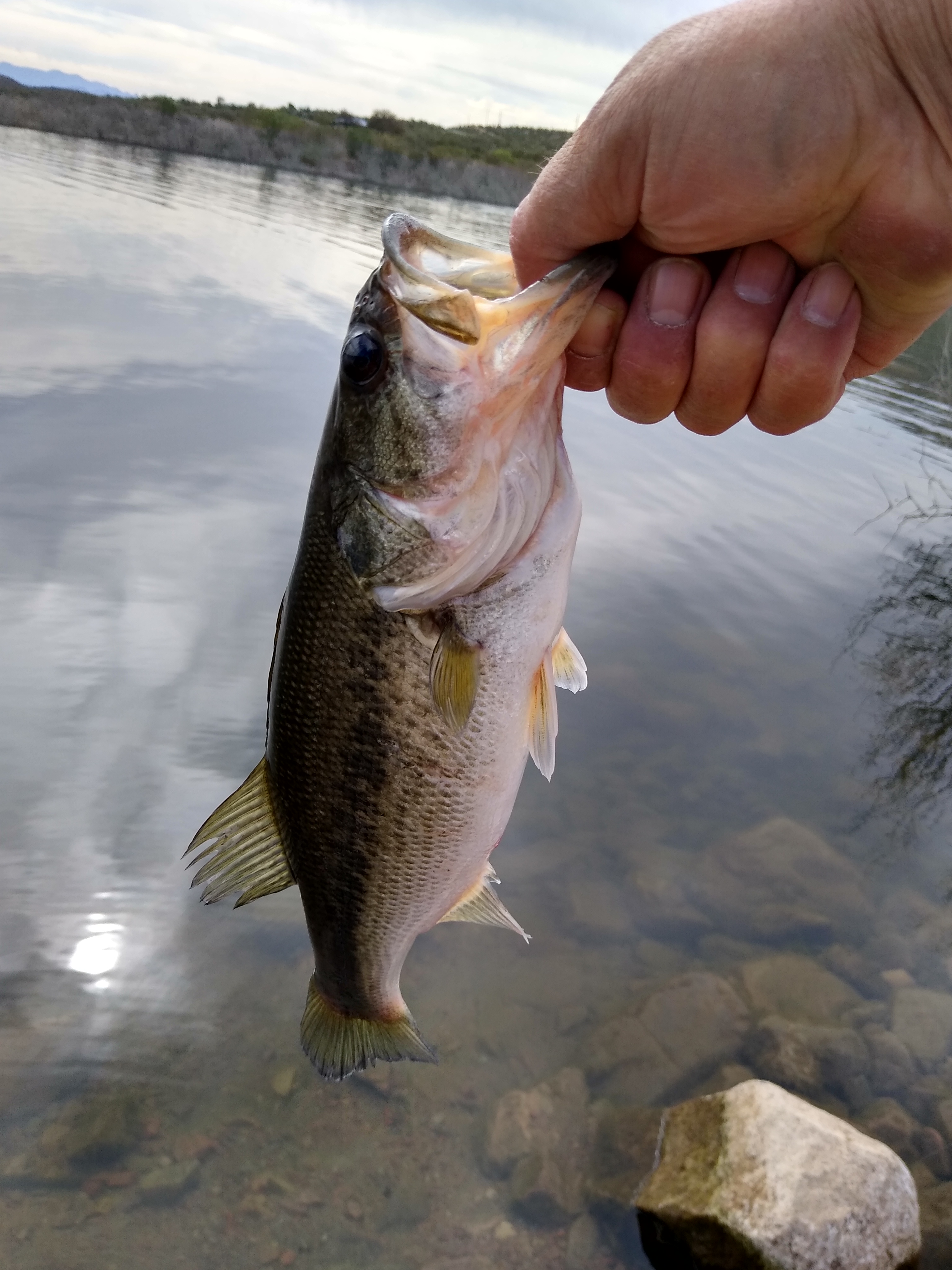 Looks like good times on Roosevelt Brent. My dad and his crew were there last weekend near where the Salt comes in, but they got skunked. Nice fish, must be that birthday luck!

Well thank God for a cigar picture. I was worried about you @brent. I could have told you to smoke “the” lucky cigar to change your luck. If that didn’t work, smoke a different one. Glad to see you learning to relax!

Before I went home, I wanted to fish a spot over by the Cove that the Dam is in. Parked my truck and looked down at the descent that was only a few degrees off of being a cliff, andwould make a billy goat cringe. A guy with bad knees, a giant tackle box, and fishing pole....oh hell no...... that certainly wouldn't end well. Medivac helicopter comes to mind.
I drove around the bend,parked, and hiked down an old service road that was closed decades ago.
I threw almost my entire arsenal at them today. Crankbaits were the only thing i could catch them on.
Caught some good fish, and lost a few today. One of which, would have been the biggest of the trip. The proverbial big one that got away.
My last fish of the day, before heading home. 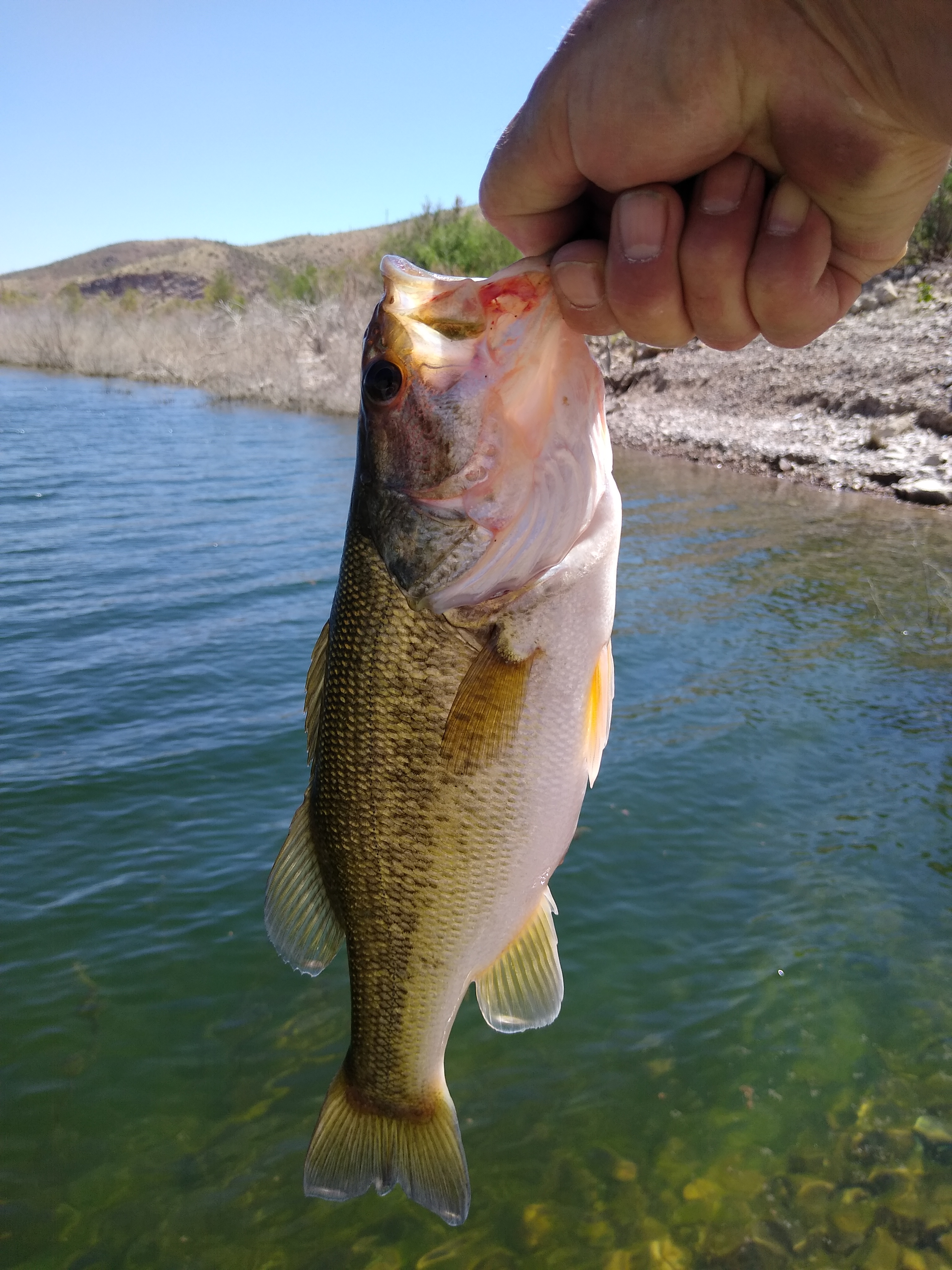 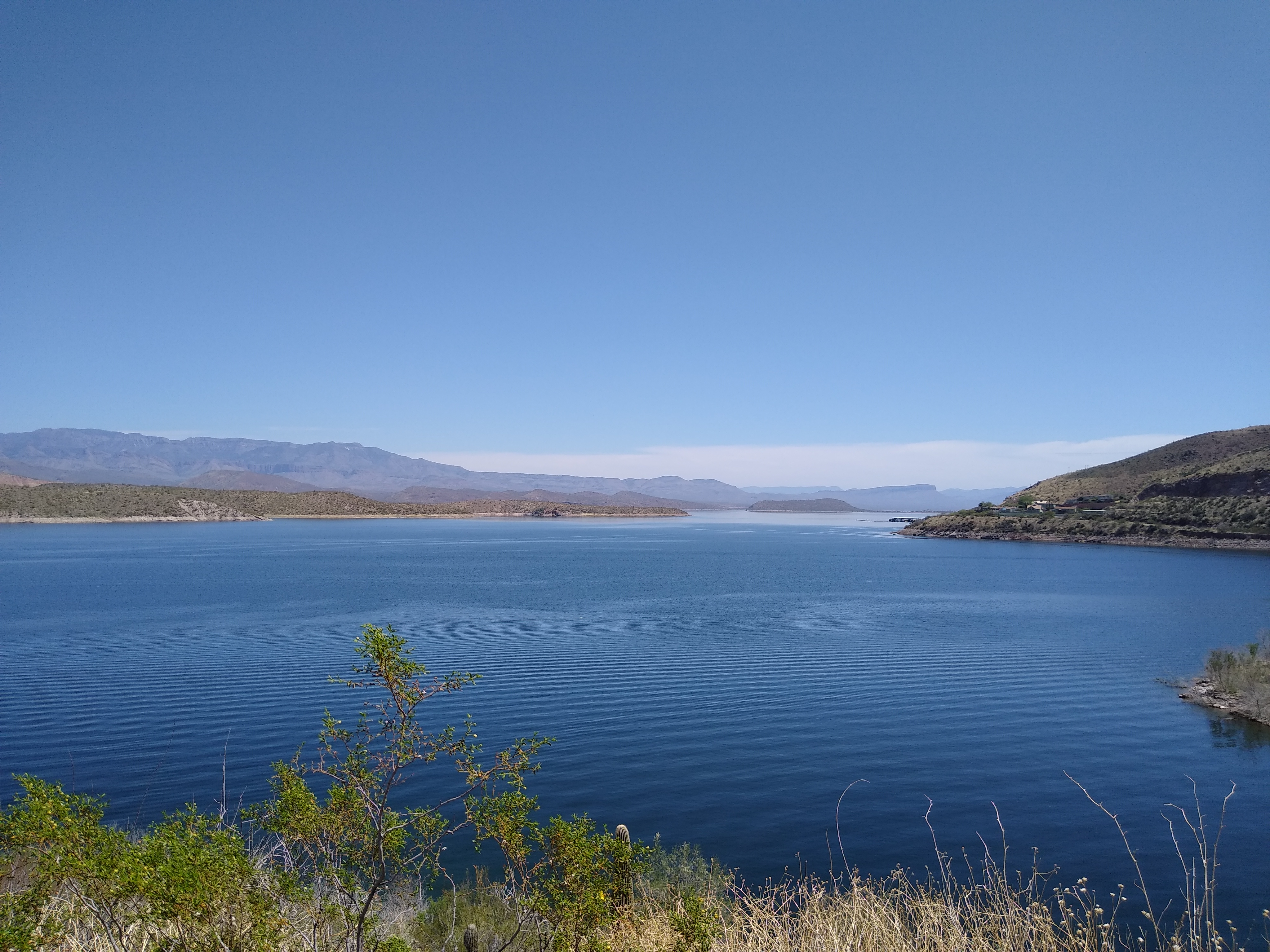 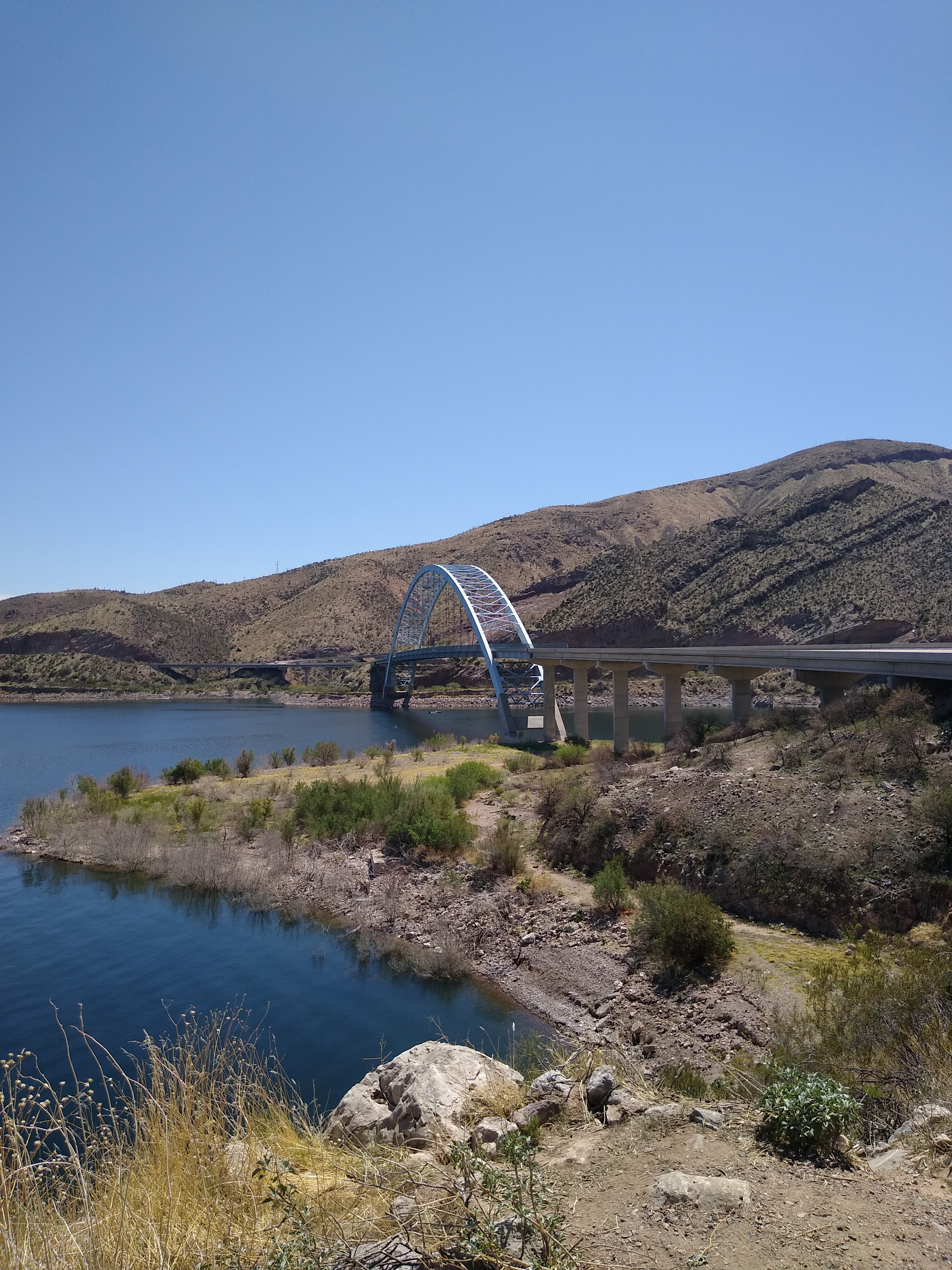 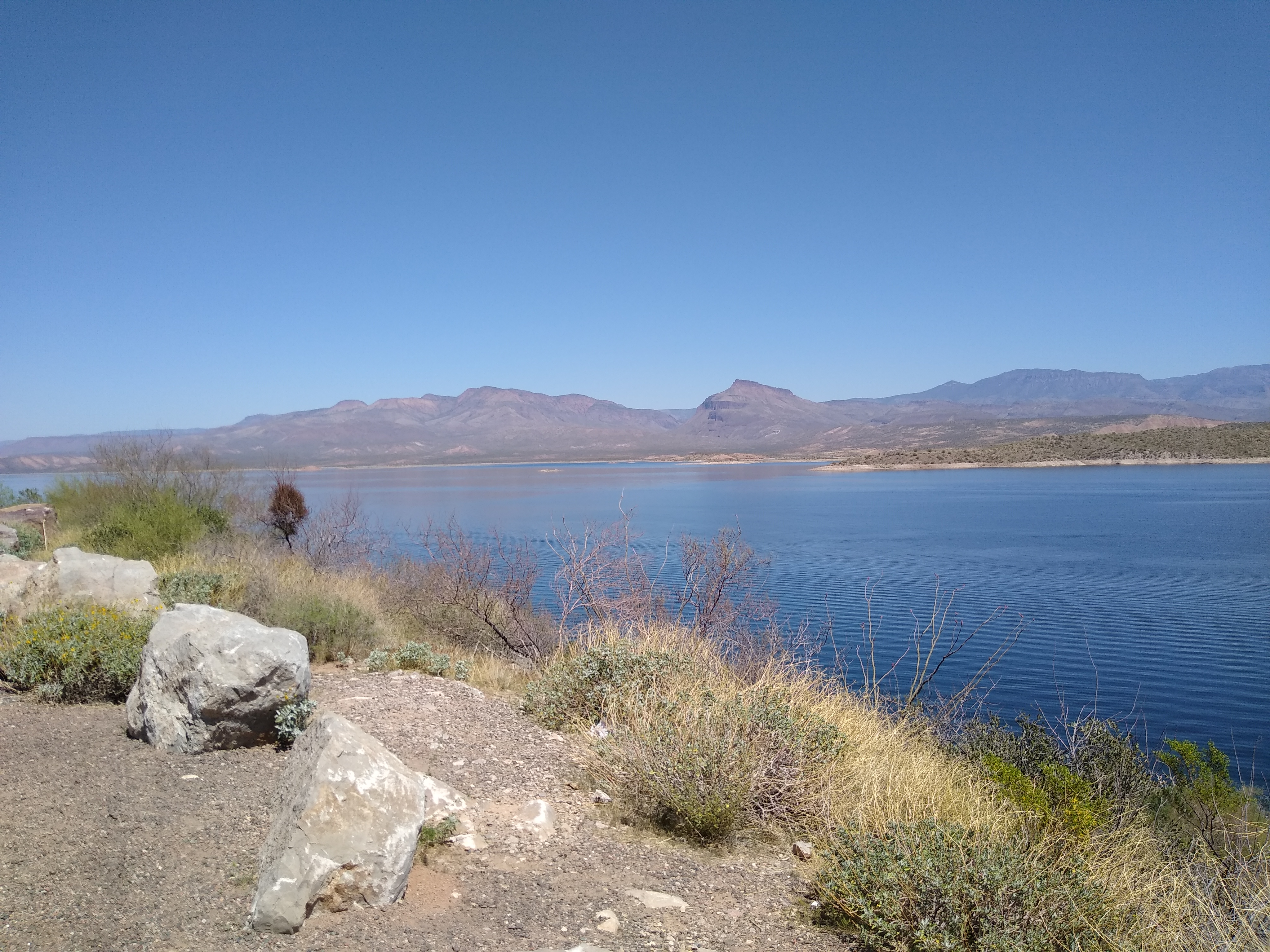 Very cool - Sounds like a good way to spend the B-Day! Hope you have a good one!

Thanks for taking me along virtually.
People talking without speaking

BourbonTrail said:
Looks like good times on Roosevelt Brent. My dad and his crew were there last weekend near where the Salt comes in, but they got skunked. Nice fish, must be that birthday luck!
Click to expand...

I predominately fish the Tonto arm of the lake, although this morning, I fished Cottonwood cove on the Salt arm of the lake.
I've been to Roosevelt many times over the years, and the Tonto side is better for me as a bank angler. I stay away from the crowds at Grapevine, and Windy hill .
If your Dad goes back soon, tell him to hit the coves north of the Damn, they are loaded with fish. Getting many of them to bite, can be a challenge.
When the water warms up more, they get more agressive.

Many of the bass I caught had reddish lips, which means they are chasing, and scooping up Crayfish. Explains why the Crawdad color crankbaits were most productive.
I lost the last one I had to an under water tree snag. Stopped by the Marina store but they didnt have any.
You must log in or register to reply here.

Ultimate Tiger Fishing on the Zambezi

Fishing in the Arabian sea