I recently acquired a 9.3x62 rifle with a 22.5” barrel. Gathering components to make loads was an adventure as everyone knows during the last 8 months. The only powder I could find that looked like a good fit without getting into my stash for my other calibers was Vihtavouri N150. I was able to acquire 4lbs, so I have plenty to work with. If you look under VV loading table on their website, you will see that max loads are a bit scattered and confusing. I actually started out with a bit over max for what was listed for 286 grain bullets, but there was a load for 293 grain bullets that had a higher charge weight. I ended up using 54 grains of powder. I am pleased with the accuracy of the load, and I did not see any signs of high pressure. I would like to maybe get the velocity a bit higher if possible. Does anyone have any experience with this powder for the 9.3x62? The photo shows my sight in target from 100 yds. The 3 shots together were my last 3 rounds after adjusting the scope. I can say that I was pleased with this powder. The description says that it is a clean burning powder which reduces fouling. After 3 dry patches, the patches came out clean. Thanks in advance for any insight. 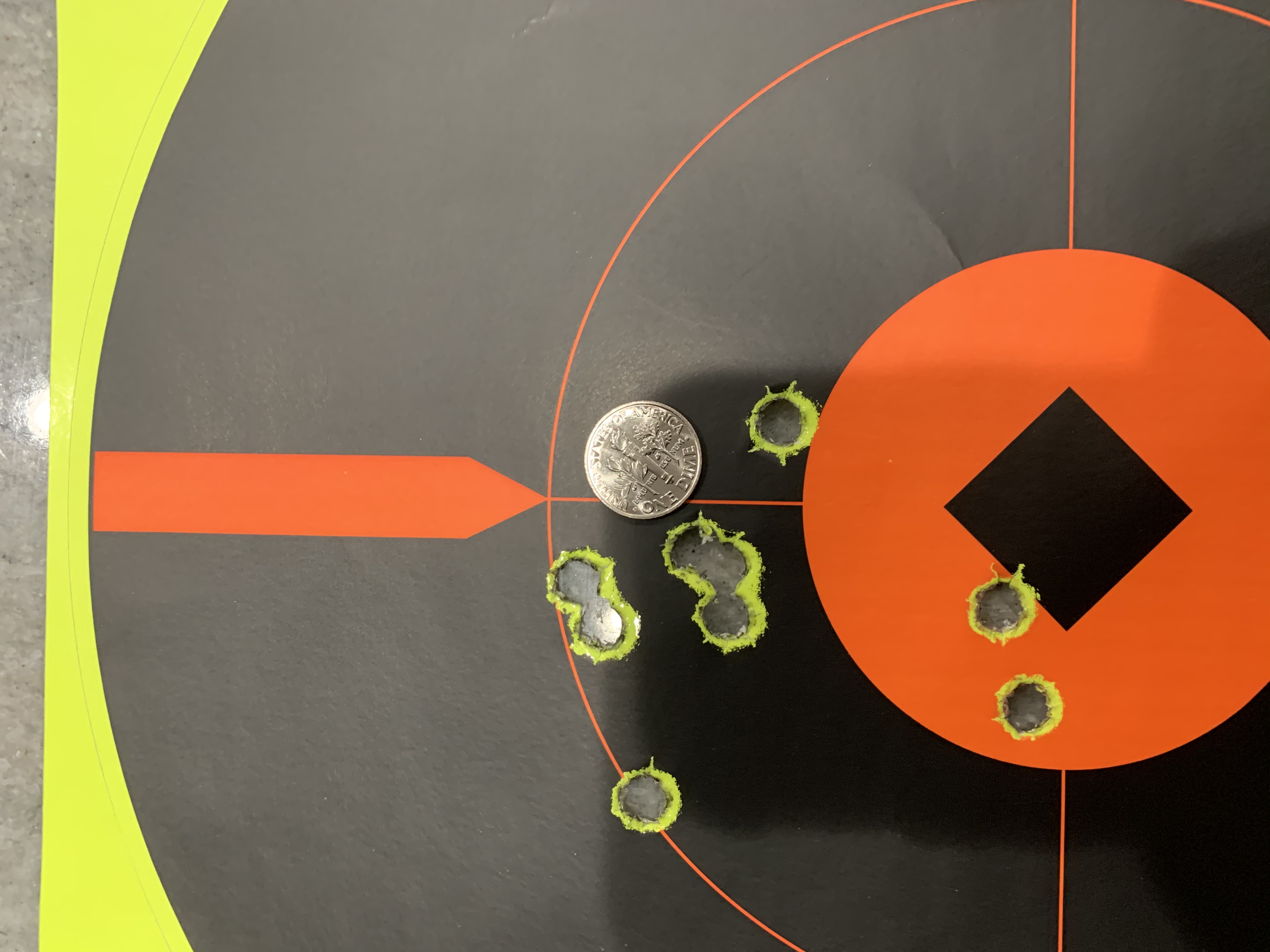 What bullet and what is your COL?

No experience with that powder and I've only loaded up to 250 grain bullets in the 9.3x62 -
But plugging your numbers into Quickload with a 286 Gr A-Frame at 3.350" COL (ASSuming I entered everything correctly), it shows as well below maximum pressure with an estimated Velocity of 2,198 fps.

If you have to load shorter than 3.350", which is over SAAMI maximum, btw, pressure goes up quickly.
With my CZ550, I cannot even get close to the lands with a 286 A-Frame at magazine length.

Predicted data by increasing and decreasing the given charge,
incremented in steps of 2.0% of nominal charge.
CAUTION: Figures exceed maximum and minimum recommended loads !

Sorry I forgot to add that I am using the Woodleigh Weldcore round nose bullet. The C.O.L. Is 3.24, and the B.C. for the bullet is .321. Thank you for the Quickload data. I also have a couple boxes of the Swift A frames that I plan to load, so your info will be most helpful. Around 56 gr is the figure I had in mind as being a maximum.

What do you intend to hunt? 9.3x62 is slow enough that even a cup and core like Hornady 286 gr spire point won't suffer jacket separation, and they'll still expand down to about 1700-1800 fps.

Also, you might check out 24 hour campfire's BBS/blog. Lots of dudes over there swear by Ramshot Big Game for 286 gr anything in 9.3
"Only accurate rifles are interesting." -- Townsend Whelen

I am planning to use the rifle for PG, but I would like to have it loaded up ready for most anything. My next trip will be mixed bag including Buffalo and Hippo. I have a bigger rifle for the dangerous game, and the 9.3 will make a good 2nd rifle in the event something unfortunate happened with the other rifle. I am not looking to try and turn the 9.3 into something it is not. However, it would be nice to get it up around 2,350fps with a 286gr bullet using the N150 powder. I will definitely check out what is on 24 hour campfire. Thank you for the information.

When I first got my 9.3, I did try to goose the loads as much as I could, but figured out after staring at ballistics/energy charts for a while that there is almost no practical difference between 2350 and 2500 with a 286 gr bullet, but there is a pretty significant difference (at least to me) in felt recoil. North of 2400 fps is abusive recoil with my rifle when sitting at the shooting bench, not so bad off sticks.

i haven't been after buffalo yet, but every PH I've corresponded with wants 300 gr SAF for that application of that caliber.

SAF 300 gr, you're looking at MV around 2250-2350, with a relatively low BC. That makes that bullet about a 150 yd bullet for reliable expansion (swift says they'll expand down to 1800, but if you look at their images at that velocity, they are underwhelming). IOW, it's ideally for close in work. NP 286 and Hornady SP 286 should provide reliable expansion out to about 300 yards. Not for nothing, but those 2 loads have almost identical ballistic arcs to 175-180 gr .308 Win loads. Not great, but still pretty decent with a 200 yard zero.

You could get away with the SAF 300 for everything if you're hunting the bushveld or similar. IMO, it would not be a great choice if shooting distances are likely to stretch out a bit. So, you may be "stuck" with having to develop 2 different loads.
"Only accurate rifles are interesting." -- Townsend Whelen

A theory that is good on paper but doesn't work out in real life is a terrible theory. Reality is always the final arbiter.
B

bill hober told me that i would not tell the difference in terminal performance between the 286 and 300 gn swift.
the 286 in fact has a higher b.c than the 300, and can go faster for improved trajectory.
both have proven to be way better killers than the 286 nosler partition on game other than what you would normally shoot with a calibre smaller than 9.3.
the 286 gn 9,3 bullets have a sectional density similar to a 300 gn 375.
i would happily hunt cattle and buffalo with the 286 swift.
i would also use the 286 barnes but it is so long it encroaches on powder space in my 9.3x64.
bruce.
You must log in or register to reply here.