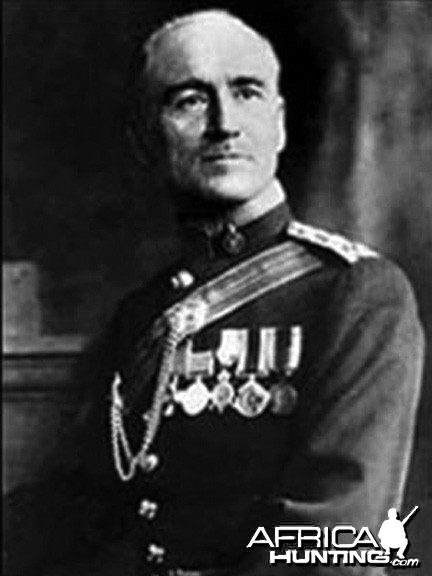 Colonel John Henry Patterson, DSO (November 10, 1867 – June 18, 1947), known as J.H. Patterson, was an Anglo-Irish soldier, hunter, author and Zionist, best known for his book The Man-Eaters of Tsavo (1907), which details his experiences while building a railway in Kenya. In the 1996 film The Ghost and the Darkness, he was portrayed by actor Val Kilmer.

His Life
Patterson was born in 1867 in Forgney, Ballymahon, (County Westmeath), Ireland, to a Protestant father and Roman Catholic mother. Young Patterson joined the British Army at age seventeen, rose quickly through the ranks, and eventually attained the rank of Lieutenant-Colonel in the Essex Yeomanry; he resigned his commission in 1911.

In 1898, then Lt.-Col. Patterson was commissioned by the British East Africa Company to oversee the construction of a railway bridge over the Tsavo river in present-day Kenya. He arrived at the site in March of that year.

The Tsavo Lions
Almost immediately after his arrival, lion attacks began to take place on the worker population, with the lions dragging men out of their tents at night and feeding on their victims. Despite the building of thorn barriers (bomas) around the camps, bonfires at night and strict after-dark curfews, the attacks escalated dramatically, to the point where the bridge construction eventually ceased due to a fearful, mass departure of the work force. Along with the obvious financial consequences of the work stoppage, Patterson also faced the challenge of maintaining his authority and even his personal safety at this remote site against the increasingly hostile and superstitious workers, many of whom were convinced that the lions were in fact evil spirits, come to punish those who worked at Tsavo, and that he was the cause of the misfortune because the attacks had coincided with his arrival. 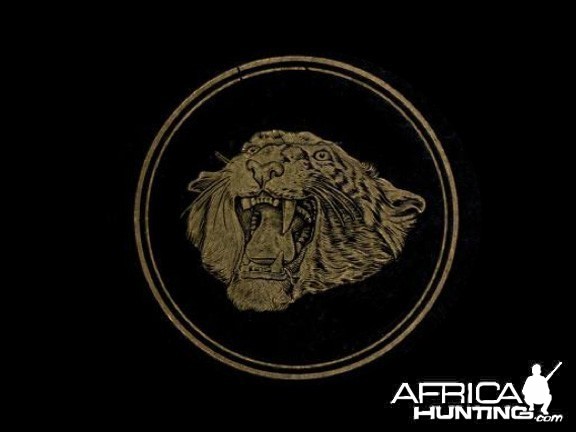 The man-eating behaviour was considered highly unusual for lions and was eventually confirmed to be the work of a pair of rogue males, who were believed to be responsible for as many as one hundred and forty deaths, although the actual number is still uncertain due to a lack of accurate records at the time. Railway records officially attribute only twenty-eight worker deaths to the lions, but they were also reported to have killed a significant number of local people of which no official record was ever kept. 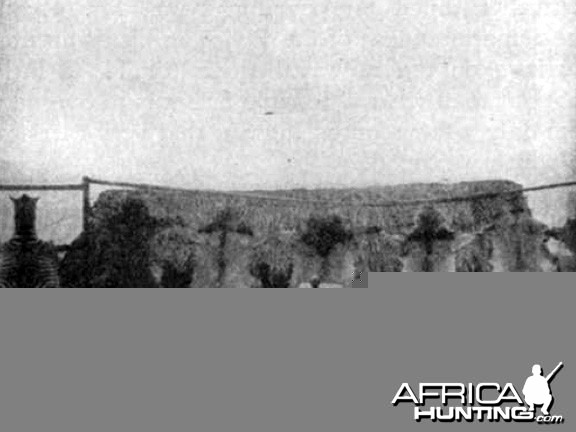 While various theories have been put forward to account for the lions’ man-eating behaviour (poor burial practices, low populations of food source animals due to disease, etc), it is now believed to have been primarily due to dental disease—one of the lions (the first man-eater) had a badly abscessed canine that could have hindered normal hunting behavior, although this claim is disputed. There was also a slave trade route through the area, which contributed to the number of abandoned bodies. Patterson reported seeing considerable instances of unburied human remains and opened graves in the area, and it is believed that the lions (which, like most predators will readily scavenge for food) adapted to this readily available supply, and eventually turned to humans as their primary food source. 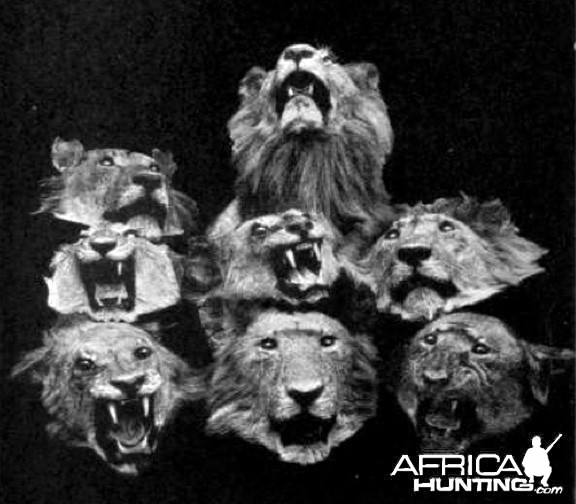 With his reputation, livelihood and safety at stake, Patterson, an experienced tiger hunter from his military service in India, undertook an extensive effort to deal with the crisis and after months of attempts and near misses, he finally killed the first lion on the night of December 9, 1898, and killed the second one on the morning of December 29 (narrowly escaping death in the process). The lions were maneless like many others in the Tsavo area and both were exceptionally large. Each lion was over nine feet long from nose to tip of tail and required eight men to carry it back to the camp. 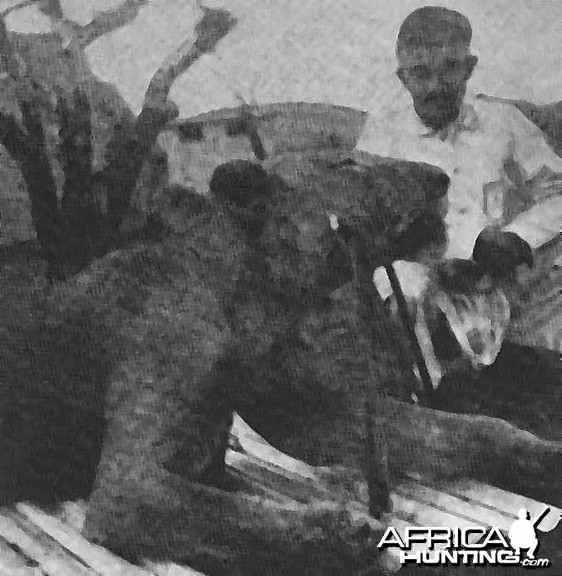 Patterson was immediately declared a hero by the workers and local people, and word of the event quickly spread far and wide, as evidenced by the subsequent telegrams of congratulations he received. Word of the incident was even mentioned in the House of Lords in the British Parliament, by then Prime Minister Lord Salisbury. With the man-eater threat finally eliminated, the work force returned and the Tsavo railway bridge was completed in February 1899. Although the rails were later destroyed by German soldiers, the stone foundations were left standing. Ironically, the workers, who in earlier months had all but threatened to kill him, presented Patterson with a silver bowl in appreciation for the risks he had undertaken on their behalf, with the following inscription:

"SIR, We, your Overseer, Timekeepers, Mistaris and Workmen, present you with this bowl as a token of our gratitude to you for your bravery in killing two man-eating lions at great risk to your own life, thereby saving us from the fate of being devoured by these terrible monsters who nightly broke into our tents and took our fellow-workers from our side. In presenting you with this bowl, we all add our prayers for your long life, happiness and prosperity. We shall ever remain, Sir, Your grateful servants, Baboo PURSHOTAM HURJEE PURMAR, Overseer and Clerk of Works, on behalf of your Workmen. Dated at Tsavo, January 30, 1899." 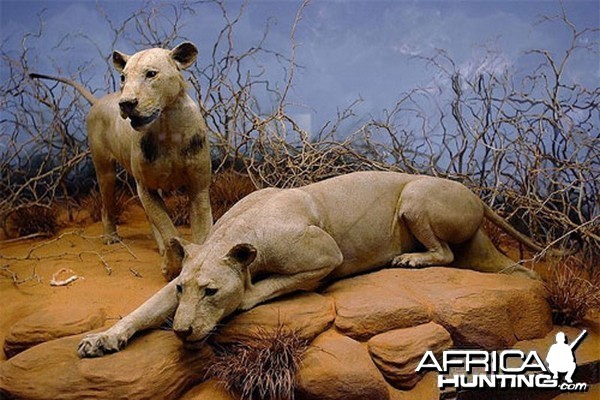 The Tsavo Man-eaters at the Chicago Field Museum - After speaking at The Field Museum of Natural History in Chicago, Illinois in 1924, Patterson sold the museum the lion skins and skulls for the then-sizeable sum of $5,000. After two-and-a-half decades as Patterson's floor rugs, the skins arrived in less-than-perfect condition—in real life the lions were even larger than they appear as taxidermy mounts. The skins were also blemished by gunshot wounds and thorn scratches. Museum taxidermist Julius Friesser did an extraordinary job creating the life-like mounts, which were first put on display in 1928. They have been on permanent display along with the original skulls ever since.

Patterson always said that he considered the bowl to be his most highly prized and hardest won trophy. In 1907, he published his first book, The Man-eaters of Tsavo, which documented his adventures during his time there. It was the basis for three films; Bwana Devil (1953), Killers of Kilimanjaro (1959) and the 1996 Paramount Pictures film, The Ghost and the Darkness, starring Val Kilmer (as Patterson) and Michael Douglas.

In 1924, after speaking at the Field Museum in Chicago, Illinois, Patterson agreed to sell the Tsavo lion skins and skulls to the museum for the then sizeable sum of $5,000. The lions were then reconstructed and are now on permanent display along with the original skulls. The mounted lions are smaller than their measured size, whether because of Patterson's exaggerated measurements or because the skins had been trimmed for use as trophy rugs prior to 1924.

Post Tsavo life
In 1906, Patterson returned to the Tsavo area for a hunting trip. During the trip, he shot an eland, which he noted possessed different features from elands in Southern Africa, where the species was first recognized. On returning to England, Patterson had the head of the eland mounted, where it was seen by R. Lydekker, a member of the faculty of the British Museum. Lydekker identified Patterson's trophy as a new subspecies of eland, which he named Taurotragus oryx pattersonianius. 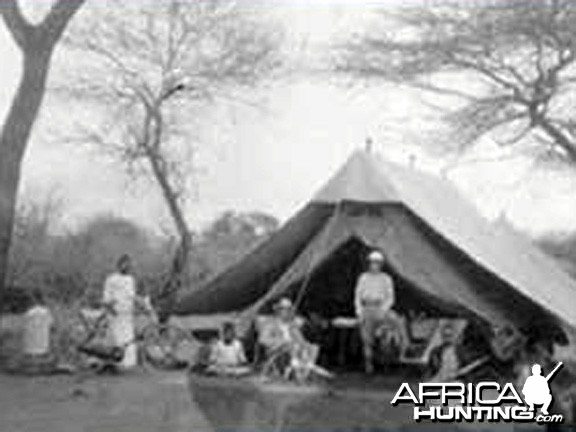 From 1907 until 1909, Patterson was Chief Game Warden in the East Africa Protectorate, an experience he recounts in his second book, In the Grip of Nyika (1909). Unfortunately, while on a hunting safari with a fellow British Army officer, Corporal Audley Blyth and his wife Ethel, his reputation was tarnished by the mysterious death of Corporal Blyth due to a gunshot wound (possible suicide – exact circumstances unknown). Witnesses confirmed that Patterson was not in Blyth’s tent when the shooting took place, and that it was in fact Blyth’s wife who was with him at the time, as she was reported as running (screaming) from the tent immediately after the shooting. Patterson had Blyth buried in the wilderness and then to the surprise of everyone, insisted on continuing the expedition instead of returning to the nearest post to report the incident. Shortly afterward, Patterson returned to England with Mrs. Blyth amid rumours of murder and an affair, and although he was never officially charged or censured, this incident would follow him for years afterward, most notably in the film The Macomber Affair (1947) which was based on Ernest Hemingway's adaptation of the incident. 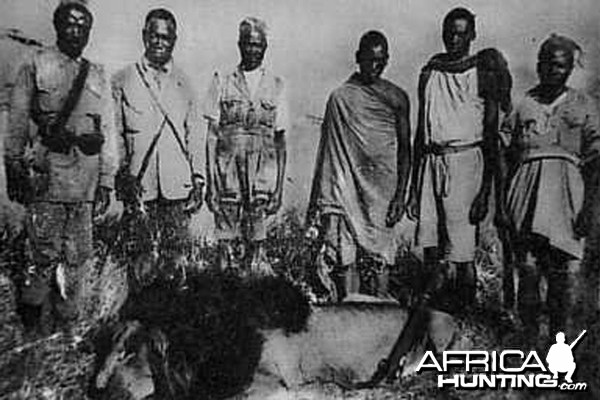 Ultimately, Patterson went on to serve in the Boer War and World War I. Although he was himself a Protestant, he became a major figure in Zionism as the commander of both the Zion Mule Corps and the 38th Battalion of the Royal Fusiliers (aka Jewish Legion of the British Army) in World War One, which would eventually serve as the foundation of the Israeli Defence Force decades later. He was promoted to the rank of full Colonel in 1917, and retired from the British Army in 1920 after thirty-five years of service. His last two books, With the Zionists at Gallipoli (1916) and With the Judeans in Palestine (1922) are based on his experiences during these times. After his military career, Patterson continued his support of Zionism as a strong advocate toward the establishment of a separate Jewish state in the Middle East, which became a reality with the statehood of Israel on May 14, 1948, less than a year after his death. 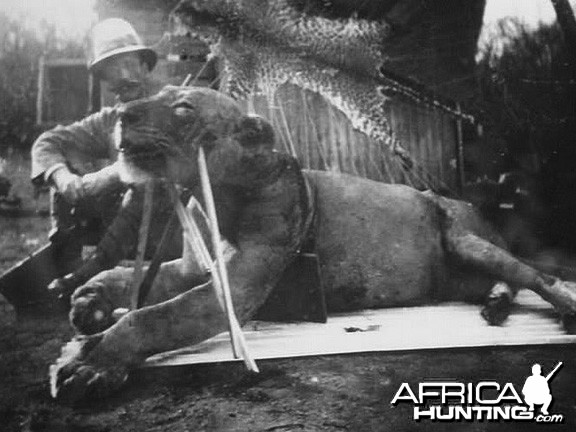 Patterson and his wife, Frances ("Francie") Helena, lived some years in a modest home in La Jolla, California. Eventually, with his wife in need of regular care and his own health in decline, he took up residence at the home of his friend Marion Travis in Bel Air, California, where he eventually died in his sleep at eighty years of age. His wife would pass away six weeks later in a San Diego nursing home. Patterson's body was cremated, his ashes being returned to present-day Israel; the exact location of his grave remains unknown to this day. 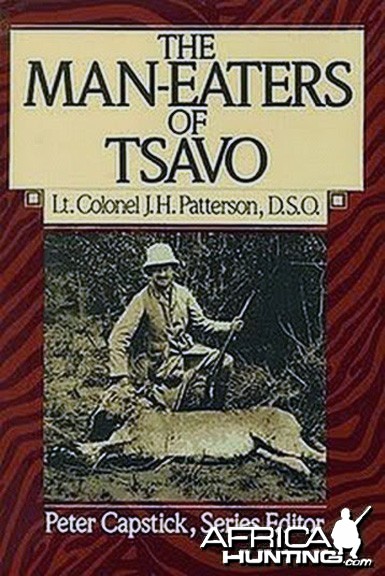 The man-eaters of Tsavo and other East African adventures by John Henry Patterson
Last edited by a moderator: Dec 8, 2016
You must log in or register to reply here.

The Man-eaters of Tsavo & Other East African Adventures

The Man-Eaters of Tsavo & Other East African Adventures