Uganda is a great place for a safari ! 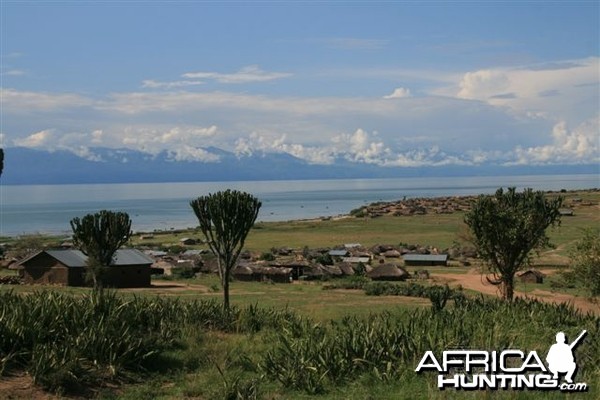 I spent the entire month of October hunting Uganda in several different areas.
We were filming it for some upcoming episodes of the TV show, Cliff's Wild Outdoor Adventures.

We arrived in Entebbe a couple of days early of the rest of our group to get some footage of culture of the area there and in Kampala, the Capital of Uganda. Visited some fishing villages on the shores of Lake Victoria. 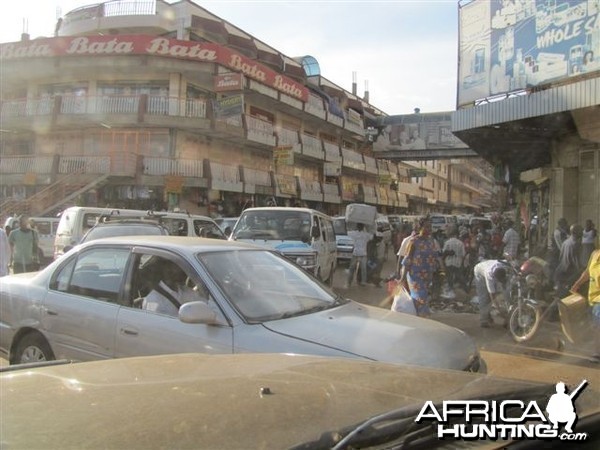 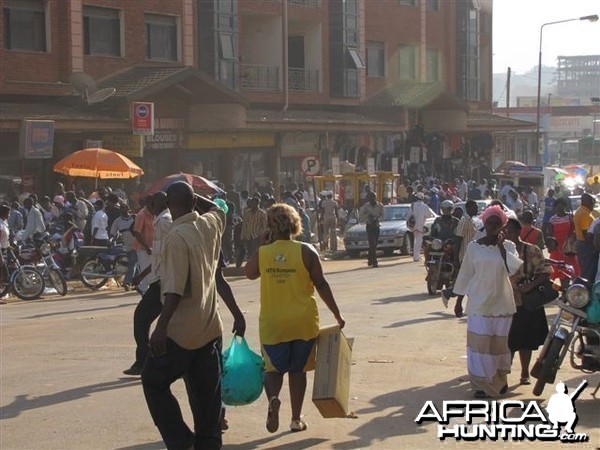 The entire time there I always felt safe and the people were always very friendly and happy to see us. I was invited to go out nightclubbing in Kampala and had a wonderful time there. I met some of the local business people and made many new friends.

There are a few different outfitters that have been awarded concessions in Uganda. Some are operating already and others are just getting their operations started this year. Depending on the animals you want to hunt, there are different species available in different areas of the country. So you will need to check with the outfitters to see what species they have available and on quota in their concessions. 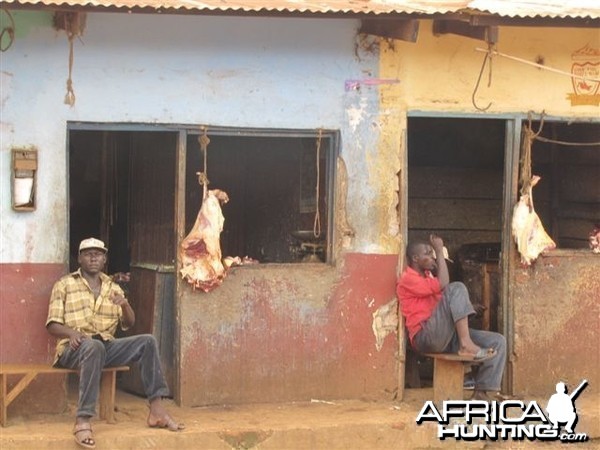 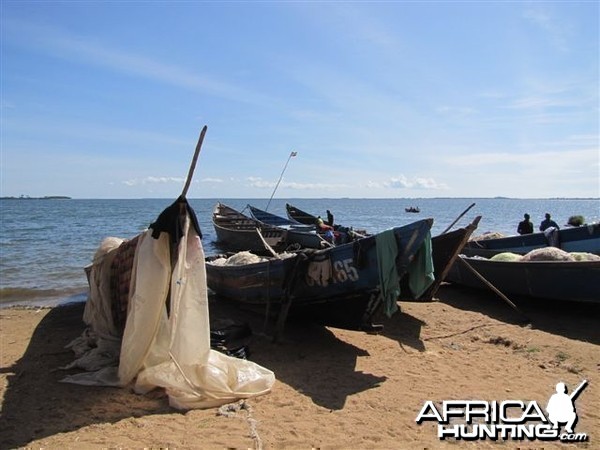 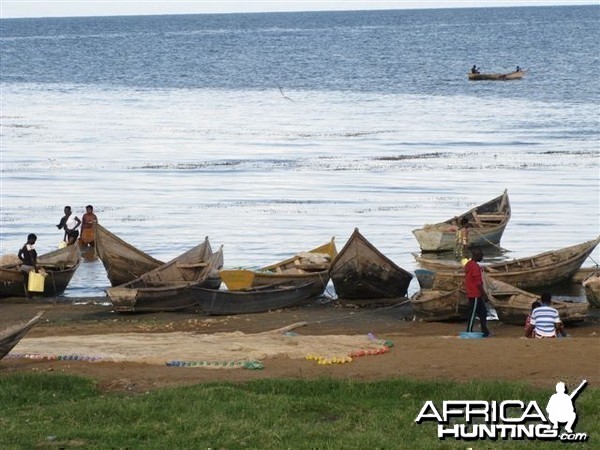 My partner Jason Bruce arrived with his wife and children as he wanted them to experience Uganda during our hunt there. Jason flew to Lake Albert and the Kabwoya Wildlife Reserve with outfitter, Bruce Martin, in his private plane. While I went by car from Kampala to Lake Albert to get additional footage of the countryside and culture on the way there.

In the Kabwoya Wildlife Reserve on Lake Albert we hunted many species: Nile Buffalo, Uganda Kob, Nile Bushbuck, Oribi, E. African Bush Duiker, Warthogs and Baboons. The Kabwoya Wildlife Reserve is located on the shores of Lake Albert and in the Albert Rift Valley in the northeast part of Uganda. Across Lake Albert we could see the Blue Mountains of the Congo. Bruce Martin has the concession for the Kabwoya Wildlife Reserve and owns the Lake Albert Lodge where we stayed. Since it is a reserve, there are no cattle or community developments allowed there. Bruce Martin operates a strict anti-poaching program in conjunction with the local military so the wildlife there is abundant and thriving! We saw thousands of Uganda Kob. And I saw hundreds of Oribi every day! Nile Bushbuck were also plentiful and Bruce is trying to get his quota on that species raised. 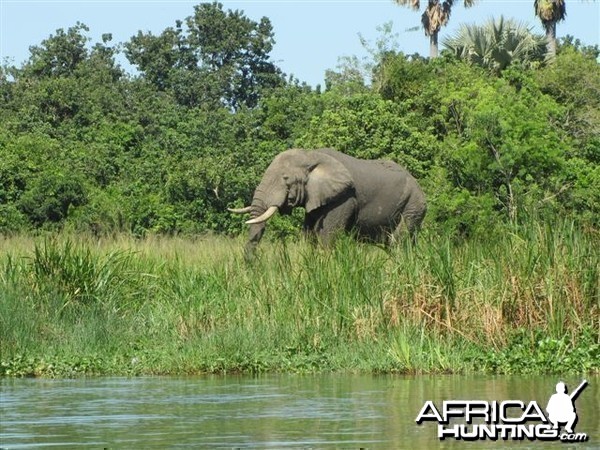 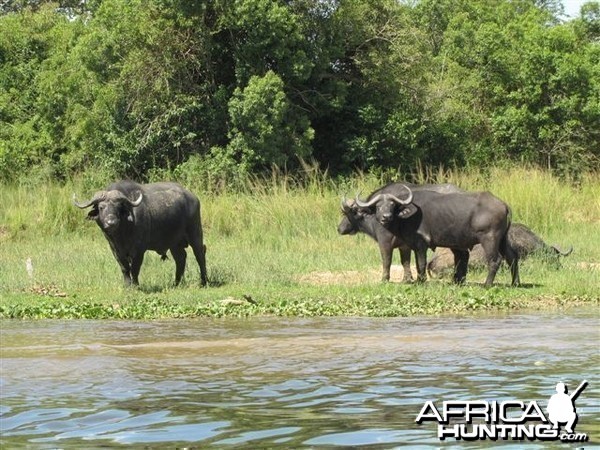 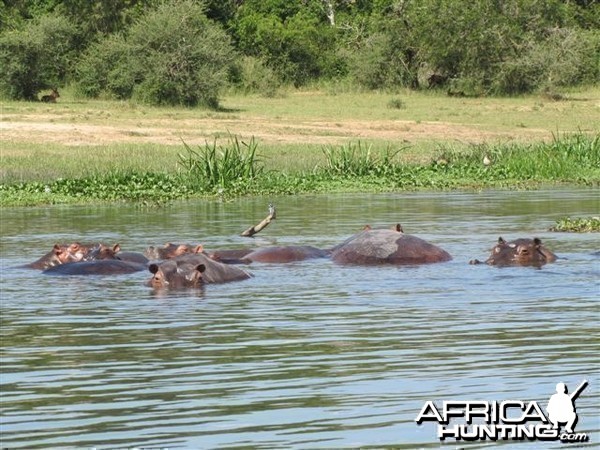 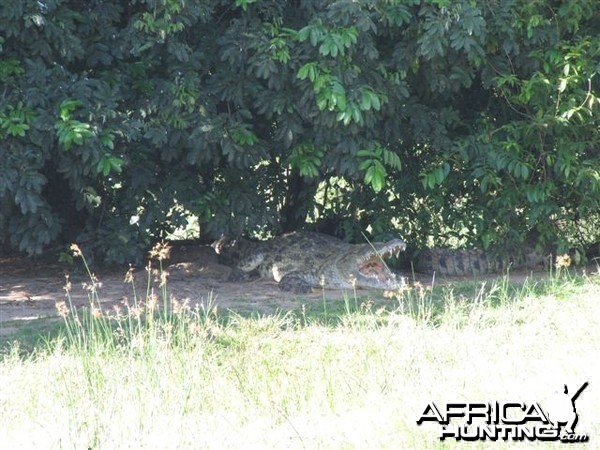 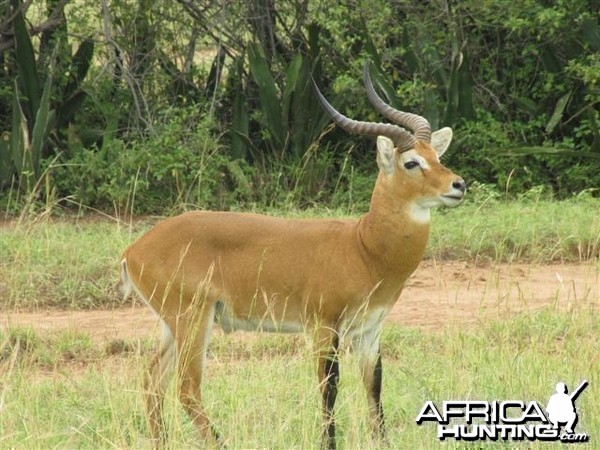 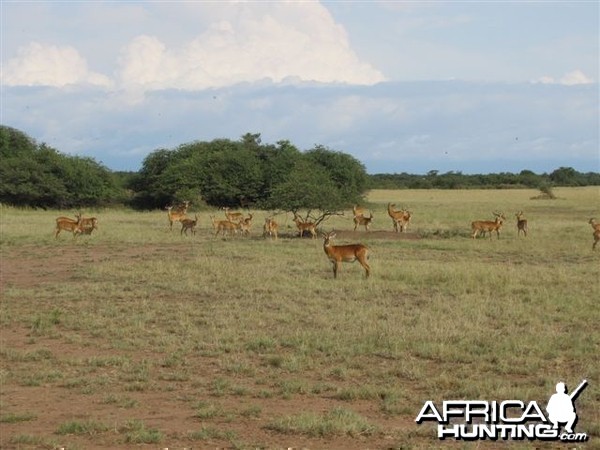 Jason was hunting the entire bag and doing it all with his bow. He took a nice old Nile Buffalo with his bow and is the first to do that. He also took all the other species with his bow. Most will be SCI number 1's with bow. 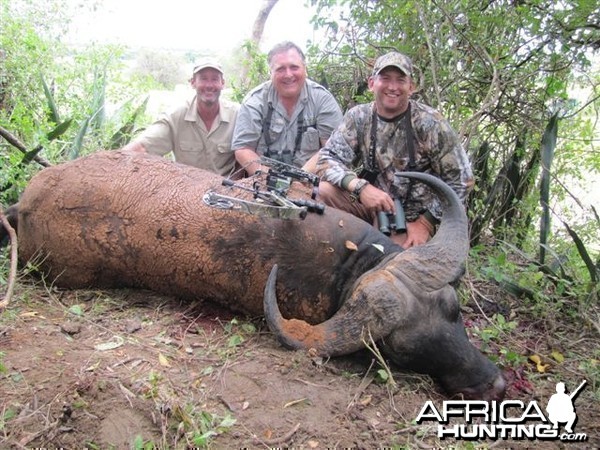 I took a really good Uganda Kob and is now listed as the number one in SCI with a muzzleloader. I took a really good E. African Bush Duiker. I wanted to take a Nile Bushbuck, but since I booked this hunt late, Bruce Martin did not have any quota left for me to hunt one. 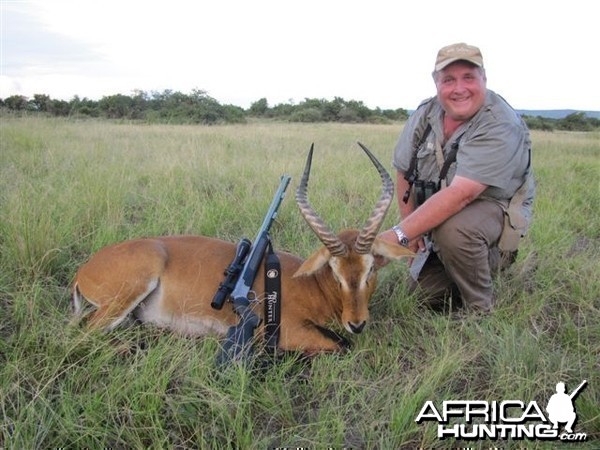 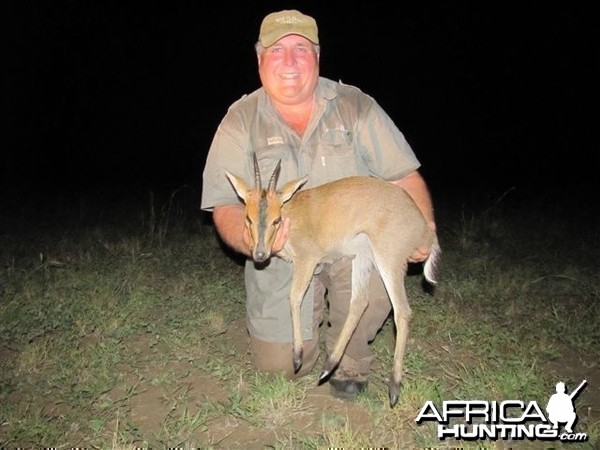 Driving through Misindi to Paraa we went to see Murchison falls where the Victoria Nile all runs through a narrow fissure in the rock. Below the falls we fished for Nile Perch (that can run over 200 pounds!) and took a boat downriver to film the many crocodiles, hippos, buffalo and elephants along the river. 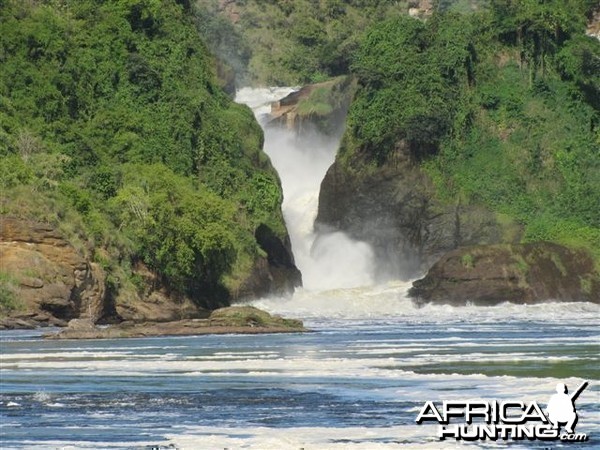 I spent a few days in the Sesse Islands visiting and then made arrangements with another outfitter to hunt a different area of Uganda.

I had heard that the Karamojo area was going to open and that John Tolmay and his partner Phillip had the concession for the area. After calling John, I found out he was not yet ready to open and didn't have any camps set up yet, but did have quota available for some animals. I told him that I didn't mind doing an exploratory hunt and we could just stay in a village there or in a hotel and drive into the area. I already had most of the species he had on quota except he did have a Guenther Dik Dik and I didn't have one of those yet. So we made a plan for me to meet with him in Kampala and we would drive up to the northeast of Uganda into the Karamojo area to hunt for the dik dik.

We drove from Kampala through Jinga (the source of the Nile River where is comes out of Lake Victoria) to Mbale at the base of Mt. Elgon. We stayed the night there in a hotel. The next day we drove north into the Karamojo area. This area had not been hunted in almost 40 years and I was the first to go there to do some hunting since Uganda re-opened its hunting program. It was very nostalgic to be hunting in the area that Karamojo Bell did so many of his expeditions for elephant. 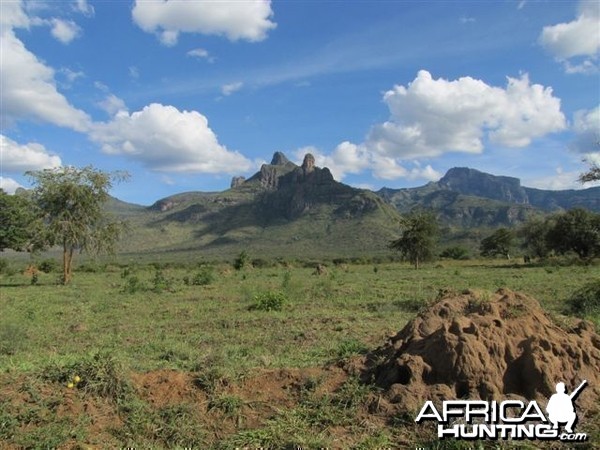 We stopped at the Uganda Wildlife Authority camp there to check in with the local wildlife officer. They were happy to have us there and looking forward to hunters coming for their safaris in the future.

After visiting with the local game scouts we continued north into the Karamojo concession. The Karamojo area is in the far northeast part of Uganda in the corner bordering Sudan and Kenya. John Tolmay and Phillip have combined their two areas to make one huge concession that starts in the south near Mt. Elgon and goes all the way north to the Sudan border. It goes from the Kenya border as their eastern border and the concession goes west into Uganda about 60 miles. So it is millions of acres and will take several years to research and see it all.

This area had been turmoil for many years as the Karamojo people fight their neighbors, the Kenyans. For centuries, the Kenyans would come into the Karamojo to fight and steal their cattle and their wives. Then the Karamojo would do the same thing back again to the Kenyans. The Karamojo people had never worn clothing, so you see many photos of them naked holding AK's.
Today they have been disarmed and are required to wear clothing. You will still see some with their traditional headwear of clay. 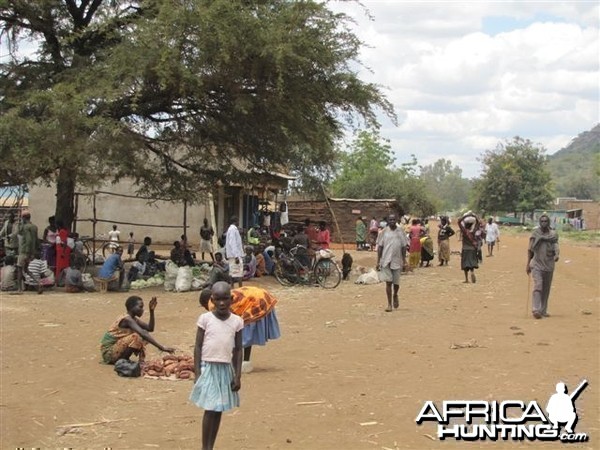 We stopped at several military camps to let them know we were there and that if they heard a shot, it was just us hunting and not a war! They were very hospitable and invited us into their military camps for coffee and snacks.

They were also a good source of information on sightings of dik dik.

We continued north almost to Moroto (only about a third of the way north into their concession). Finding several good areas with populations of dik dik, we found a good male and I was able to make a good shot on him. 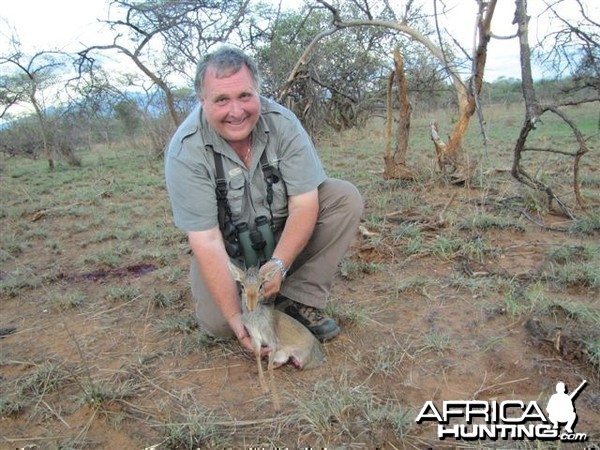 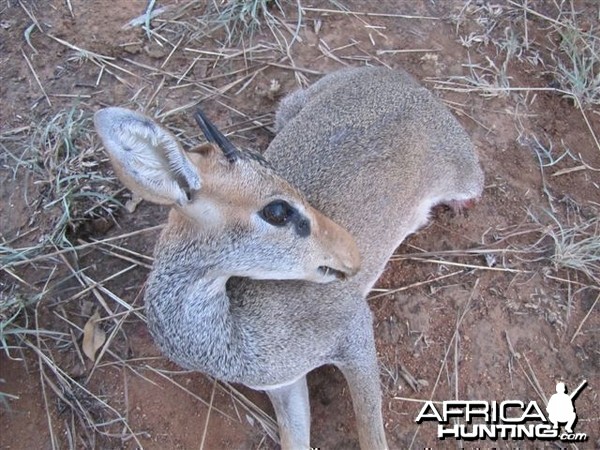 Our hunt there was short, but I had a wonderful time and made some plans to return in the future to hunt other species they will have on quota. Also to return to help in doing some exploratory trips into this vast area to see what animals are there.

Traveling back to Kampala, I visited my new friends there for a few days while waiting for Jason to have some success with the sitatunga with his bow.

He had opportunities if he had a rifle, but came out empty with his bow. He will return again to try for the Sesse Island Sitatunga this year.

Uganda is a wonderful country to hunt and I plan on returning again!

Thank you an excellent post. There will no doubt, be many wonderful stories to come from Uganda now that it is open for safari.
CRS, NRA Patron Member, DRSS, DWWC, TSRA, Whittington Center,
Android Ballistics App athttp://www.xplat.net/

Thanks for the report Cliff. Will definitely have to look or the upcoming shows. Good to hear about new areas being opened up. Sounds like you had a great time. Thanks for the pics. Looks good.
C

It was an excellent article on the new hunting opportunities in Uganda. Thank you for sharing it with us. When will your show be aired? Also, can you please share how to contact the Safari Outfitters you hunted with?

Must be a beautiful place Uganda , good photos , thanks for sharing them with us.

Monish
You must log in or register to reply here.