Hunting On Mauritius: On A Java Deer

Hunting on Mauritius: On a Java deer

A blazing sunset on the Indian Ocean as a conclusion to a stalking trip. Happiness on earth exists – destination Mauritius. Notes from a dream island by Philippe Jaeger.

Mauritius is one of those destinations where the globe-trotting hunter can hear everything and its opposite, social networks and their deluge of nonsense (we remain courteous) distilled by an army of self-proclaimed experts not being there to make things right. Since there is no smoke without fire, we’ll be perfectly honest with you and admit that when our A380 landed on the edge of a lagoon with turquoise waters we were somewhat divided as to what awaited us. That being said, the passion and commitment shown by Lionel Berthault before our arrival was confirmed once we got there and this French 40 year-old who has been living on the island for almost 20 years quickly erased any doubts that were troubling our minds. 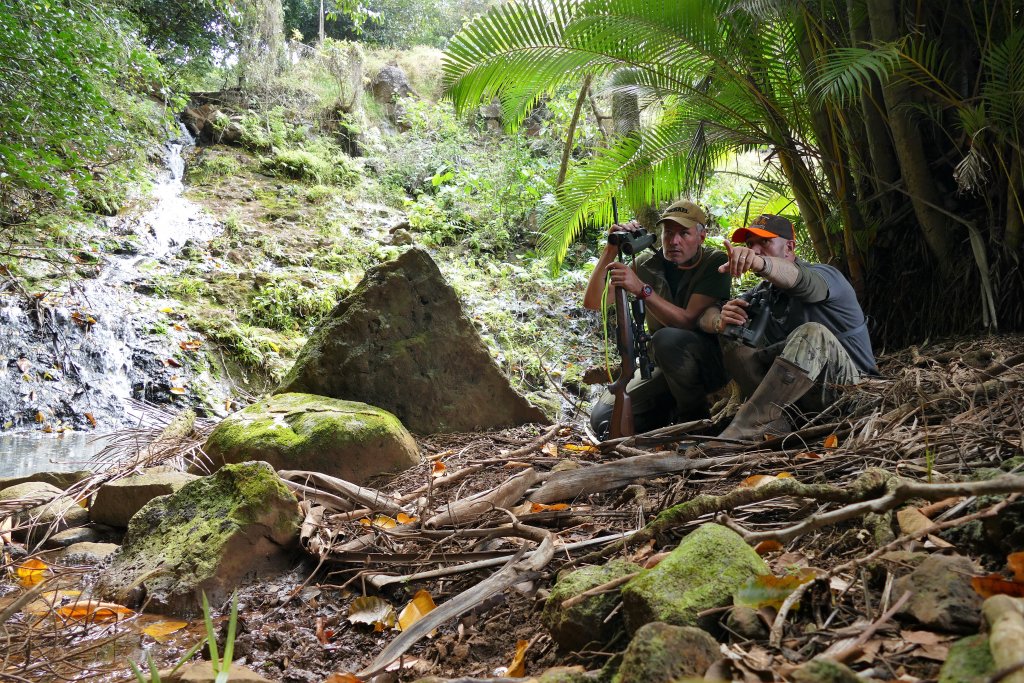 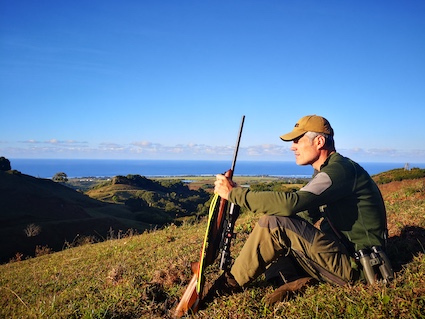 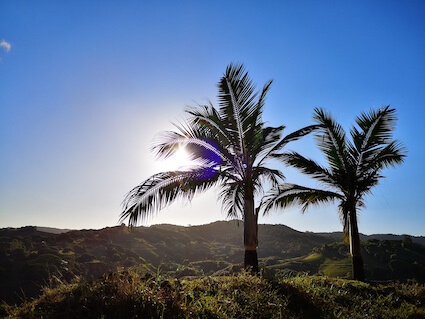 First surprise while we were along the southern coast, Mauritius is not a succession of 5-star resorts reserved for the billionaires of the planet, but an island where a colorful population reflecting the diverse origins of the sailors who have criss-crossed the Indian Ocean for a thousand years. A diversity that we will also find on the hunting plan, because originally this small piece of land was not populated by ungulates. Very quickly we join the hunting camp of Bel Ombre and its “hut” which will serve as headquarters for the next few days. We are welcomed by Nicolas Chauveau the director of the place and friend of Lionel, who offers us a delicious mango juice produced on the spot as a welcome. The day will end smoothly with a visit to the shooting range to check the correct adjustment of the glasses.

So here we are, concentrated on the essential, that is to say on hunting and hunting in Mauritius in the company of Lionel Berthault. It is an encyclopedic stroll in the middle of nature that transports you a few million years back in time. On the hilly domain of Bel Ombre which covers about 3000 hectares in real life (5000 hectares flat), the owners who are passionate about hunting have decided to replace the sugar cane culture by an eco-tourism activity of which the management of ungulates is an integral part. This management is essential to allow vegetation to develop and especially the endemic forest of which Bel Ombre shelters a large part of the last thousands of hectares that Mauritius has. On the scale of the island, only 4% of the territory is still covered by endemic forest and hunting territories are the last ramparts against human and animal deforestation. 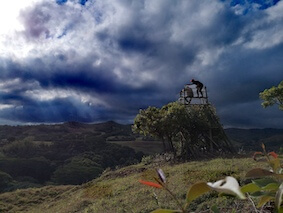 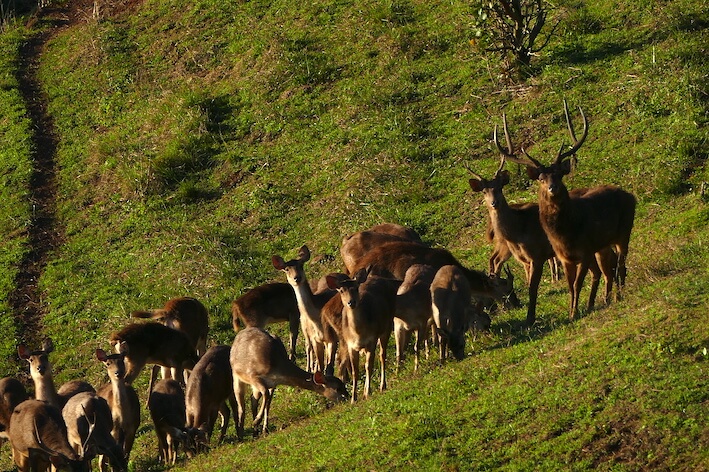 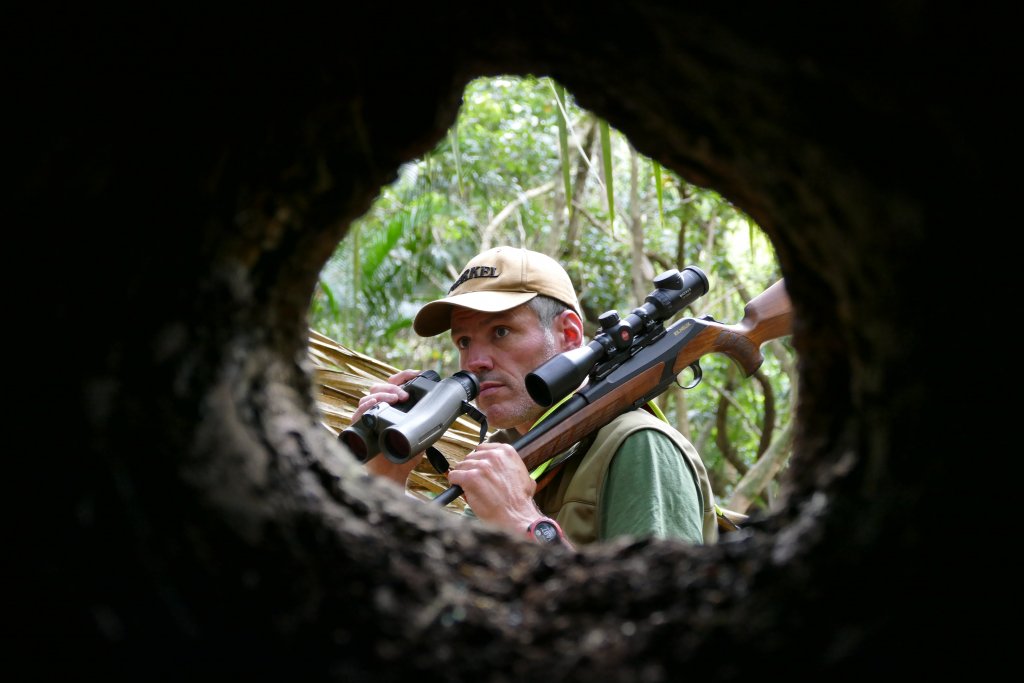 At dawn, we leave the hunting camp on foot and go for a hunting trip in the company of Lionel who quickly sees the silhouette of a brown pig “in the plain in front of us”! The animal reached the protective canopy of the nearby forest and we continue the approach. A little further on, Lionel stops and fixes the azure blue of the sky where the silhouette of a bird of prey attracts our eyes. It is a Mauritian kestrel, a very rare endemic species which, like the pink pigeon and the big parakeet of Mauritius, is the subject of a preservation plan on the hunting area in close collaboration with the Mauritius Wildlife Foundation.

Without the help of the hunters who provide the hunting territories for the installation of nesting boxes and who regulate the predators, including the grey macaque, these three species of birds would have disappeared long ago. We are at the very beginning of September and the rut of the Java deer, also called Rusa deer, is coming to an end. After a month of hard fighting, the males are exhausted and limit their movements, which makes their hunt all the more exciting. Our naturalistic wandering continues from valleys and undergrowth to steep ridges, finally leading to a plateau from which we spot a herd of deer.

The view is simply Dantesque, as while observing the animals we enjoy the spectacle offered by the turquoise blue rollers that wash up in the distance on the white sandy beaches. This species was introduced to Mauritius in 1639, by Dutch sailors who wanted to have a stock of fresh meat during their stopovers on their way to the Indies. The adult males weigh up to 150 kg on their feet and develop antlers which generally carry six antlers of variable length.

The second day of our hunt will prove to be the apotheosis of what a stalking hunter can dream of! After three hours of walking which once again allows us to dive in the heart of tropical vegetation where we weave through gigantic bamboo forests, cross clear streams and then climb up the mountainside, the reticle of the scope ends up at the shoulder of a superb Rusa deer of at least ten years old.

Africa a Different Way or Bowhunting on Mauritius

MAURITIUS: BOWHUNT: Africa A Different Way Or Bowhunting On Mauritius

A new africa hunting lover is there!

Mauritius To Reopen For International Travel From July 15