*This story is not to boast about fancy shots or to be macho. It is to show that things do go wrong and that you sometimes have to make a plan on the spot given the circumstances.


Hippo Bowhunt in the Save

October in the Gona-re-Zhou area of Zimbabwe is hot and dry. The confluence of the Save and Lunde rivers is where we were based for our hunt. The area has been selected as we hoped to get a hippo and possibly an elephant within 14 days using a bow and arrow.

The three of us were at it again. (Yawan) my Spanish client and the utmost gentleman were staring into the fire, listening to Kirk, my soft-spoken friend and Zimbabwe PH and me discussing the plans of our hunt. We were longtime friends of many safaris with both rifle and bow.

We were up at 4am and left camp at 5am to work the river in search of a good bull. After looking at many hippo and assessing the size and approach we were back after dark to analyze what we had. One night a native came into camp and told us that a hippo terrorized his village almost every night and if we could help.

The next morning found us 300 meters upstream of the village trying to spot the culprit. We saw several bulls and were not sure which one it was as the natives each pointed to a different one.
In one fact where they certain though. The hippo came out at the same spot every night, and he came alone. This had us think up a whole new plan.

We sat at a spot +- 20m from where he would emerge. The place was perfect. He would be broadside and going uphill, which was as good as it gets. The night was silent with only the occasional (pop) from the river. We heard him at 7:50 pm. He came slowly as his body had trouble at the steep incline. As he came into range Yawan came to full draw with his Hoyt Viper set at 90lbs. Kirk hit the spotlight and I indicated the spot with my laser pointer.

Where the sapling came from nobody knows as we checked every inch of the arrows flight before we went into the blind. Pandemonium! The hippo spun around and hit the water like a dive-bomber. The arrow went in about 12 inches and wounded the bull in the shoulder instead of penetrating a full 31 inches to the nock, high in the lungs. The next morning came at long last as we spent the whole night protecting the village from an angry, wounded, bull hippo.

We saw him again and started to make arrangements to dispatch him when he got wind of our plans. From then on all we could see were his nostrils pop up and going down within a second or two as he came up for air. This was not the way we wanted it to happen. At about lunchtime I came up with a new plan. I would shoot into the water and hopefully he would lift his head high enough to get an arrow into his brain.

Unethical? Maybe. Out of ideas? Definitely. But I was certain that this bow and arrow could do it. We spent many hours shooting at Hippo sculls during our time so as to see what can be done and at what angle. The least amount of bone would be directly below the ear +- 1,5 inch. This is also the shortest way to the brain. We always try and get a new angle on our hunting.

After the shot the bull lifted half his body out of the water and looked sideways. 100foot pounds of energy flew with a 210gr Steelforce broad head followed by a 6.3 P C shaft inside an ACC 371 for a total weight of 980gr as the Hoyt Viper spat its venom.

Yawan was at full draw as I shot and the arrow struck the Hippo at the base of the ear. Blood flew from his nostrils as his brain was cut in half by the Steelforce.

We did it. Very unorthodox one could say, but I did not have any doubt in the bow setup. It was designed to do just that. Cut trough heavy skin, sinew, muscle and some bone.

After we retrieved the bull Yawan shot some arrows into the body to see how the penetration would be with other brands of broad head and arrows. Some were very good while others were disappointing. That is how we learn the trade looking for the big and heavies.

We were satisfied and happy and were already planning our next adventure. We made a lot of mistakes and learned from them and we made some breakthroughs that we were happy for. 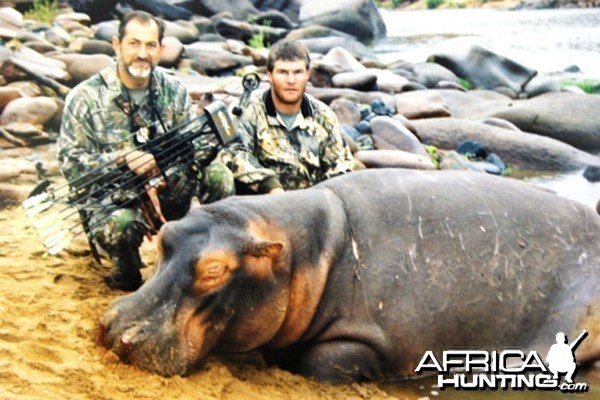 Thank you to Yawan and Kirk for making life as a PH worth it.

Fritz Rabe
Askari Adventure and Fritz Rabe Bow Hunting
Last edited by a moderator: Dec 1, 2016
You must log in or register to reply here.