I've been wanting to hunt antelope for a long time and with a lot of reading and videos as of late (prepping for Red Stag in 31 days) i have a real desire to do a DIY hunt. I know Antelope are relatively cheap hunts even guided but I've never had the chance to do a packout/camp hunt and sounds like antelope lends itself to it.

I think i remember someone here saying they go with a group out every year and have a great time and some success. I very much dont have the equipment but looking at hunting next fall so have time to plan and accumulate whats needed. Basically looking for advice on everything and would really love to find a person or group that could show me the ropes on a local public land. I know most dont want a stranger tagging along and completely understand.

Is Montana best place (always wanted to visit so kind of works out)? What kind of equipment for camping/eating/surving should i need? What zones or units should i look for?

Thanks alot for any tips

I would recommend Wyoming as a DIY antelope destination. Mainly due to the tags being easier to draw and great antelope population on public land. Trophy quality in Wyoming is very comparable to Montana.
For a quality goat Arizona and New Mexico will produce exceptional animals with regularity but drawing a tag is difficult and good hunting on public land is harder to come by. Good luck and feel free to PM me if I can help you out
Cheers,
Cody
"Montana seems to be what a small boy would think Texas is like from hearing Texans" John Steinbeck

You will also find that drawing a tag in Wyoming on a unit that has lots of public land will take a few years of points and the units that are quite easy to draw will have lots of private land where access is hard to get.

But I also second looking at Wyoming, they have more pronghorns than any other state and quite possibly more than a few states put together.

The best thing for you to do right now if you would like to hunt Wyoming is to go to the Wyoming Game and Fish web site and purchase a preference point. You have until the end of October but now is as good of a time as any, and it will start you on the process to putting in for the draw next spring. Then cruse around their site to get familiar with it.
If you don't care where you are, you are not lost.

I know whyoming keeps coming up but other things I have read also said they aren't the easiest to get a tag in. If you had 12 months to plan to go hunt pronghorn, is it possible and where?

I'd love to visit whyoming as well, just like to have opportunity to hunt and camp in the west. Living whole life on east coast, "The West" is thing of dreams

I'm not sure on Montana but it is quite easy to draw a doe/fawn antelope tag in Wyoming if you just want to come out and get a feel of things.

As for camping I know people that "Motel Camp" right in town and eat in restaurants for the day or two that it takes to get their doe/fawn tag filled.

I'm sending you a PM.
If you don't care where you are, you are not lost.

If you want to "plan" a hunt, buy a tag in NM and be done with it. You buy the tag and the access to the ranch(all low fence). It will cost you anywhere from 1k-5 for a tag.
"Montana seems to be what a small boy would think Texas is like from hearing Texans" John Steinbeck

Bull: I've looked all around multiple states and know can get a well reviewed place for $2000-3000 with lodging and all. I'm just more looking for the "classic" backpacking hunt where you set up camp way out get to spend time in great country I've never been in before. May be a terrible idea that plays out nothing like I imagine but if so I'll just go guided the following year

dailordasailor said:
Bull: I've looked all around multiple states and know can get a well reviewed place for $2000-3000 with lodging and all. I'm just more looking for the "classic" backpacking hunt where you set up camp way out get to spend time in great country I've never been in before. May be a terrible idea that plays out nothing like I imagine but if so I'll just go guided the following year
Click to expand...

Please don't think I'm trying to dissuade you! You have a great plan and it will turn out great, I will even set you up to camp on my property if you can draw a tag for my area in Montana! I just have terrible luck on goat tags(most tags actually). PM me and I will give you the unit to put in for and if you draw, myself or my Dad can put you on some good antelope. I just know how trying to plan a western hunt always seems to end in disappointment when the tag isn't in the mail! I ended up this year without anything I thought I had a chance of drawing so I booked a hunt in KS, ended up drawing an AZ deer tag(seven years) and winning a raffle on a Montana Elk hunt, all for November! Hell if they fire me, I might be living back in Montana and we'll have a blast! Lol,
Cheers,
Cody
"Montana seems to be what a small boy would think Texas is like from hearing Texans" John Steinbeck

I appreciate the very kind offer! I'll shoot you a pm, maybe I have amazing luck but not usually... 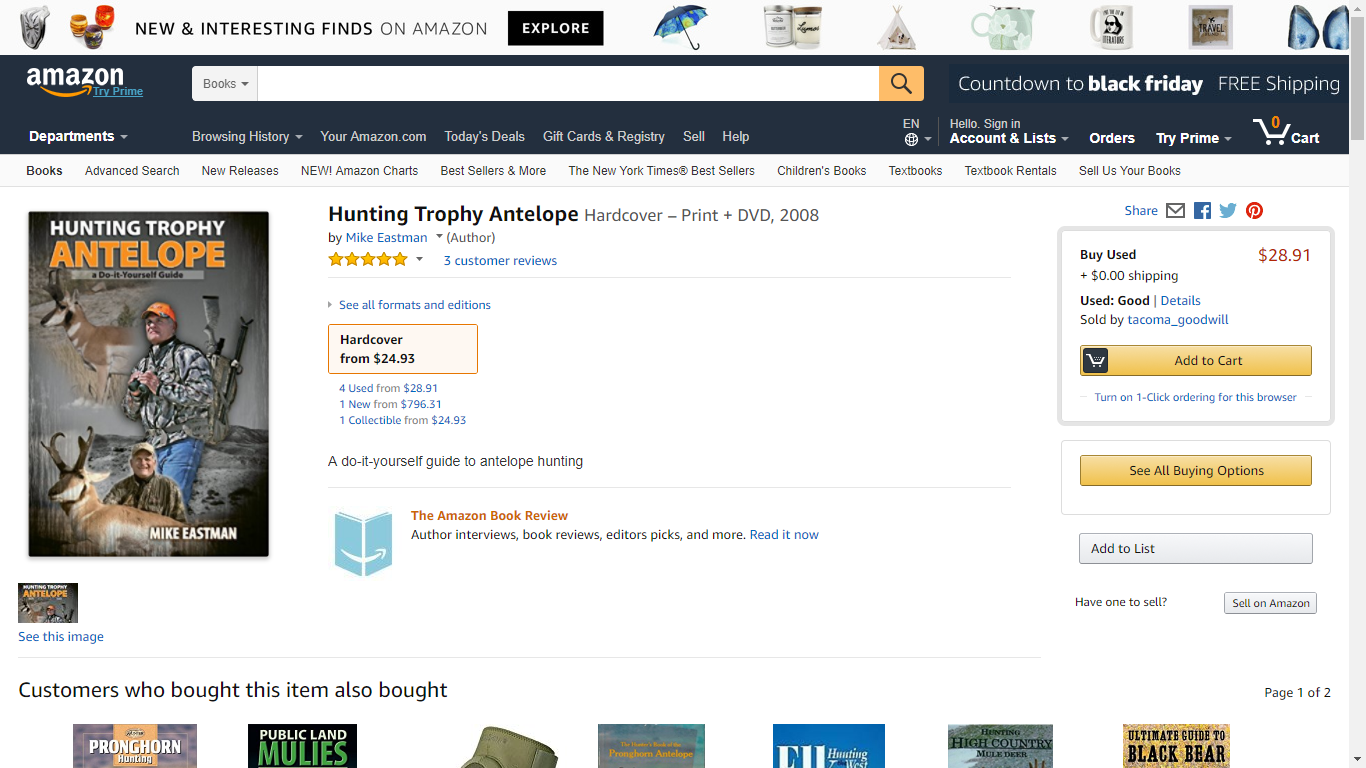 Last edited by a moderator: Nov 13, 2017
"Your imagination is your preview of life’s coming attractions." ~ Albert Einstein

I’ll take a look at it! Thanks

I did several such hunts in Montana some years back and was successful once, got a nice buck. We hunted in the area just south of the reservoir in the east, a smaller unit that had fewer folks drawing for it. Got drawn in other areas as well but only scored in the east on a small section of public land. We used a simple camper-on-pickup affair and also pulled my trailer over a couple times. Its great fun, often frustrating trying to get within shooting distance of the fleet footed buggers. I shot mine at about 300 yards and standing. Often they are farther out and usually running. Its not a sure thing, more challenging than one might think.

I’ve been reading and watching a lot about the hunt and don’t have any false hopes I don’t think. Just looking for a great experience and a good buck on top is only a bonus

If you hunt with us next fall I know you'll have an experience. How great it will be depends on a lot of things, but it will be a good time for sure. And if one like this suits you, we should be ok. 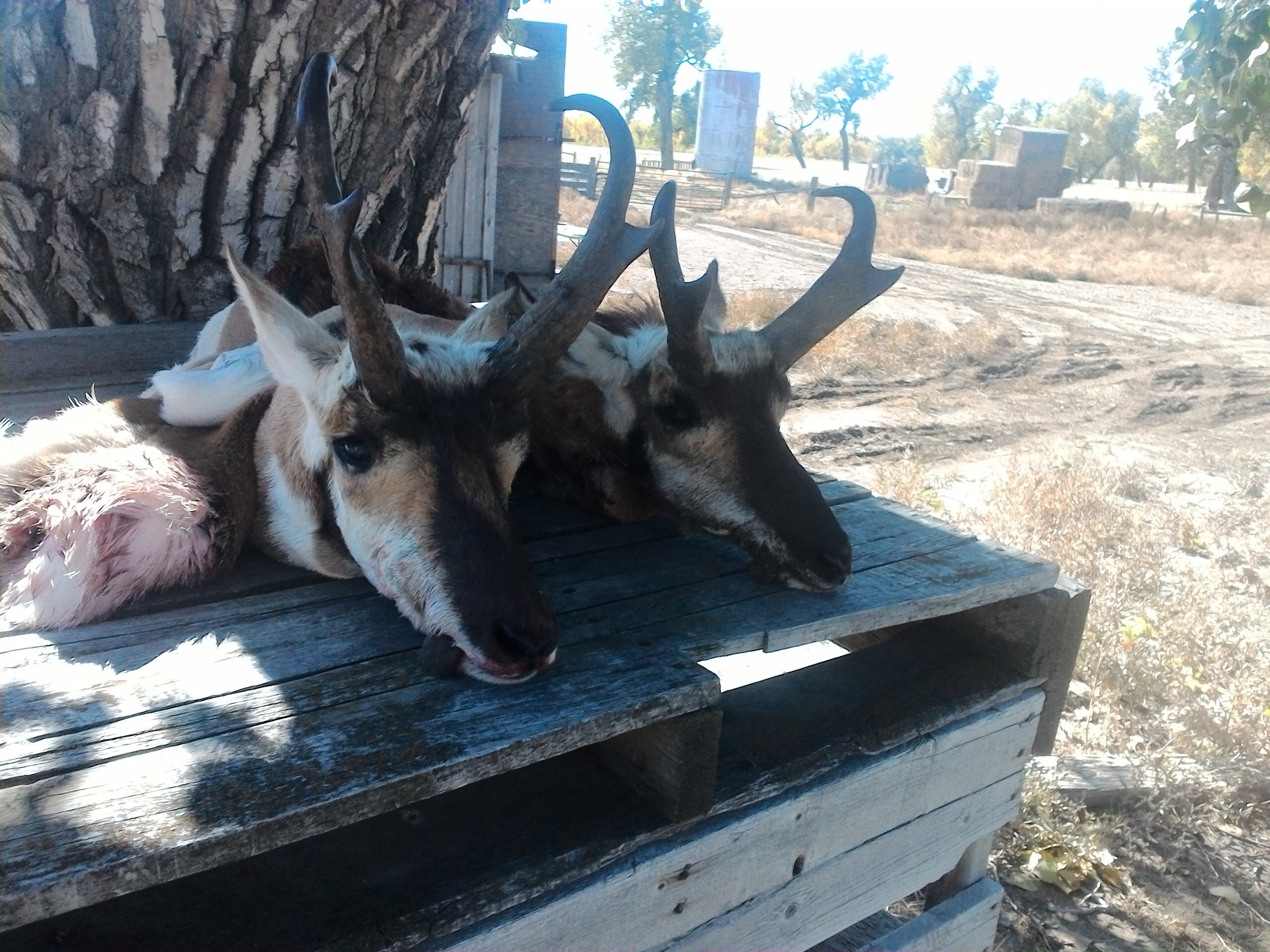 I recently flew all the way to England and shot a spike Stag. It’s all about the experience for me. Aside from some type of illness/broken bone, the experience can only be good for me as it’ll all be new and exciting. Impatiently counting the days till next October. Problem with reading a bunch of stuff about hunting the West is those pesky Elk keep popping up...

After 35 years of working in public education (no vacation for use during hunting season!)...I have retired and have an open dance card for next fall...but without the $ for a guide/outfitter. I too am looking to do some DIY western hunting next year and beyond. I am probably starting with over-the-counter tags (elk in Colorado is first on the list for a variety of logistical reasons) while applying for tags in a few areas/species. But, I will be interested in hearing about about your process...please share your results.

Duck hunter was kind enough to potentially invite me to join his group for 2018 or at least give me all direction needed to jump start me in his unit.

My next quest is OTC Elk cow or whatever I can get my hands On. Love to join another newbie even just as extra pack to haul shit out if your interested. Heard antelope is addictive though so could be in trouble there

dailordasailor said:
Duck hunter was kind enough to potentially invite me to join his group for 2018 or at least give me all direction needed to jump start me in his unit.

My next quest is OTC Elk cow or whatever I can get my hands On. Love to join another newbie even just as extra pack to haul shit out if your interested. Heard antelope is addictive though so could be in trouble there
Click to expand...

Yes antelope are addictive, but then so are mule deer, elk, moose, caribou, whitetail deer and just about anything else you can hunt.

Antelope are pretty easy to hunt. It helps a ton to know the boundaries to the unit and private land. Like @ sestoppelman says be prepared for long shots and high wind.

One of the toughest things about antelope hunting is trying not to sit, kneel or crawl through cactus.
You must log in or register to reply here.

What are good units for public land hunting in Wyoming for Antelope?

Can anyone help me with Wyoming?
2