Cost of dip and ship

My four trophy skins and skulls have arrived in the USA. Portland, Oregon. I post this so new hunters, or those returning after a long absence, can better plan costs.
Namibia: One eland, skull, horns and cape
South Africa: one Nyala and one impala S, H and C. Plus one zebra flat skin, no head or hooves.
Costs: Namibia dip and prep $180. Yorck Hufnagel
Namibia ship of one eland $860.04 Pronto Air
RSA dip prep of 3 total.....$580 Bullseye Taxidermy, ship of these: African Legacy $785.88
Customs in Portland, Oregon and ship to my taxidermist in Idaho, $1935.26 Brownstone International

I hear you @flatwater bill, it ain’t cheap!

Wow that's crazy. We have a sable, kudu, red hartebeest and Impala that should be shipping soon from RSA, I'll have to post what the total comes to all the way back to the taxidermist when we get all the bills

I guess I lucked out, as I have a really good taxidermist in RSA.

Okay, had I not gone off a relatively straight there (home to Coppersmith to home) and back, I could have saved a few dollars. But hey why rush things, it's always nice to visit friends. Especially when one is able to show them some (mounts) of animals they haven't seen, first hand, (except maybe on TV), share a hunt story or two, and photos/ videos. And generally just catch up.

Now anyone whose has seen my various posts here on AH. I did have a problem with 2017 mounts being damaged. I can say that the problem was resolved satisfactory. Shit happens.

As there were posts by AH members who also received their trophies, or ship and dip damaged.

I'm just adding my 2 cents as to what to expect other costs could be incurred.

NOTE: With my outfitter my hunt was paid for prior to departure to RSA, including international and in country flights. The only extra costs upon arrival- that is after my hunt- extra animals, tips, and taxidermy, and souvenirs.

Taxidermy payment and shipping were paid a year +/- later: Due when taxidermy is ready for shipment.

Rex Shipping, and I coordinated shipping payment through Coppersmith along with Coppersmith's import fees.
M

This is good thread.

This is what I was looking for as preliminary info and could not find before my first safari. I just had rough idea.

Basically, trophy shipping cost is the biggest uncertainty when planning a budget for safari.

I live in Europe and shipping costs are smaller then those compared to USA from what I can see:

Dip and pack from Namibia:

Above are all inclusive price dip and ship, plus delivery to my door. When I put it on the scale, it came as average between 30 to 35 Eur / kg.
Last edited by a moderator: Dec 15, 2019

Sounds awfully high.
Tommorow is promised to no one. Go live your dreams.

My animals will be shipping out tomorrow to Chicago. Sable, kudu, Impala and red hartebeest all skulls, capes and backskins. Cost for dip pack and ship came in at $1680. Now just waiting on customs broker fees and what the quote is to ship to the taxidermist. If the shipping is high I will just be picking them up myself and driving the 10 hrs to pick them up, drop them off and drive home.
Last edited by a moderator: Dec 15, 2019

Just got my 2018 June hunt dip/pack ship done. Crate is airborne on its journey to Dallas from Johannesburg.
Cape buffalo, Nyala, Sable and Springbok
All skull capes and backskins.
Dip/pack and paperwork $850
Airfreight and all brokerage fees and delivery from Dallas to Eric in Amarillo $1290

Tom at Trophy Shippers handled everything and was great to work with.

Ok.. dip/pack for full skin leopard/skull, full skin Damaras dik dik, two springboks, steenbok, duiker, full skin zebra, and kudu cape/horns. $1400. Air freight/pick up $1275, Hunters international with shipping to my taxidermist$900. Taxidermy....well that’s going to be another heck of a bill!
Tommorow is promised to no one. Go live your dreams.

I'm waiting for my trophies to leave Tanzania, but it's only been two months since my hunt. I'm told it will take three months to leave Tanzania, and perhaps be held up because of the baboon skull. I'll have 1 hide, 2 shoulder mounts, and 5 European mounts. I'm also using Coppersmith for stateside customs. I'm interested to see how the Tanzanian costs vary from the above prices. More later...
H

Dip/ pack should average no more than roughly 150 per animal skull cape and backskin. If your spending more your getting stiffed, add 20-30 each trophy for crating costs
First suggestion, #1 Don't use a taxidermist for DIP PACK use a soley dip pack company. # 2 Get multiple freight quotes. CHECK the price they charge for Documentation,Vet check all inclusive Average is 350 per safari unless you have cites than 110 more. My clients CLEAR in my case Chicago always . Use coppersmith or AH sponsor Trophy Shippers least expensive and do EXACTLY what ANY broker is doing for you now. Shipping to taxidermist , in my case you DONT . You ship to my tannery 120 miles away from Chicago. Once there, I cover all other expenses, horns to studio and anything in the crate, average cost from Chicago broker to tannery after landing and clearing in Chicago- $200.00
Last edited by a moderator: Dec 15, 2019 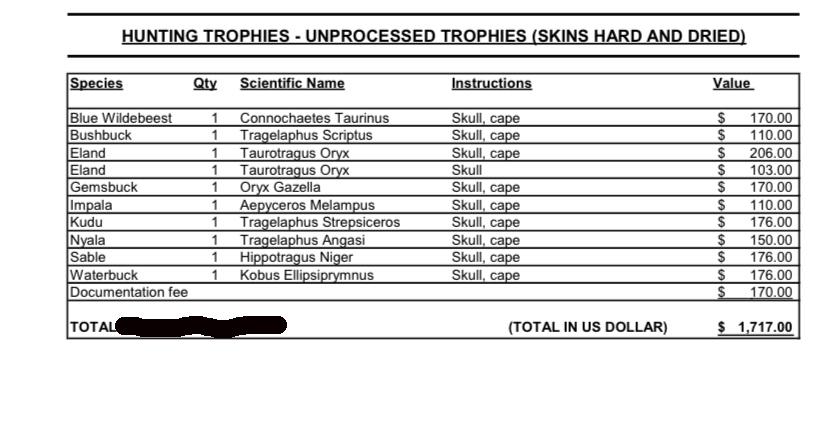 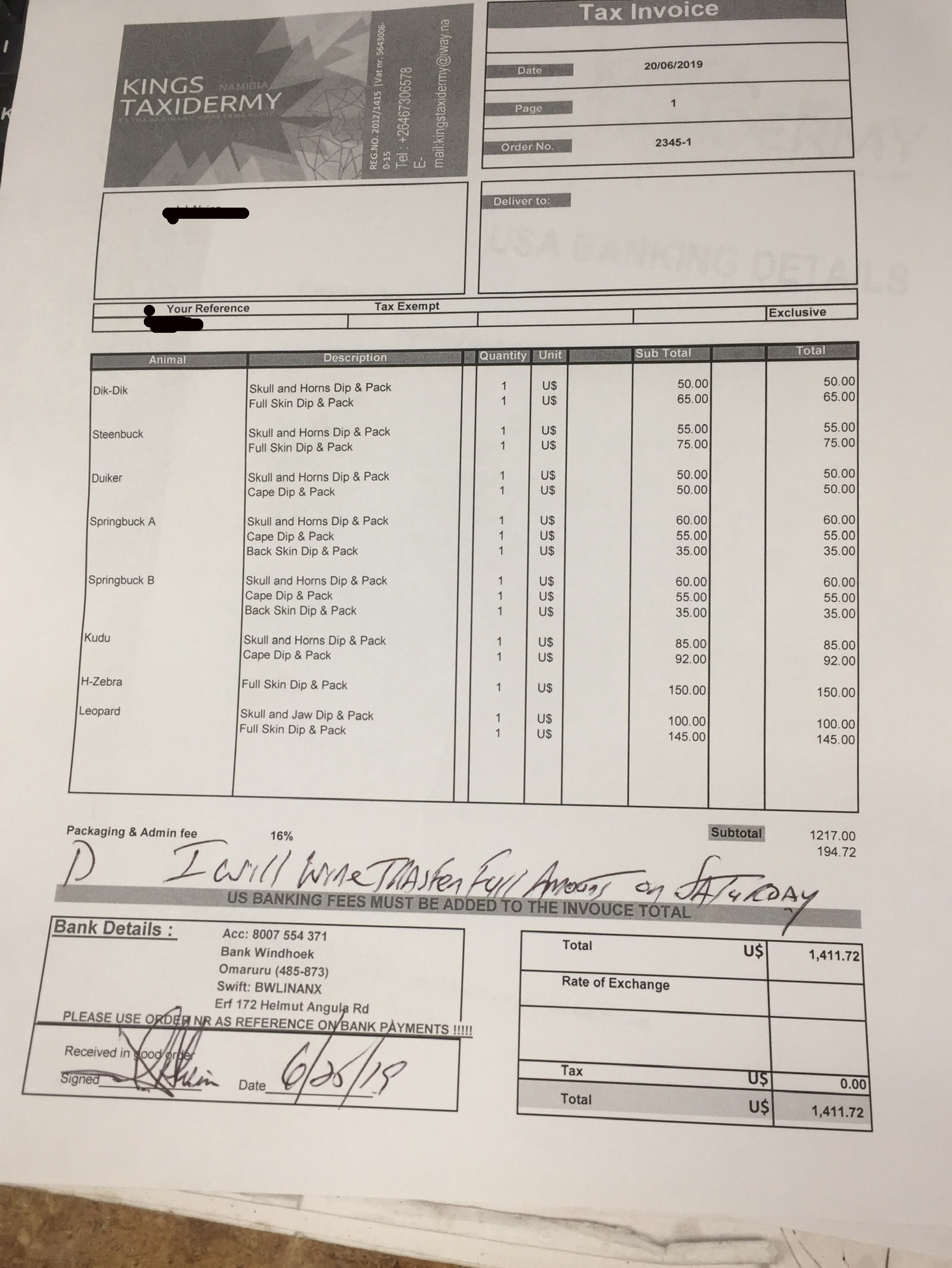 Last edited by a moderator: Dec 15, 2019
Tommorow is promised to no one. Go live your dreams.

I have just started researching the dip and pack portion of this July's safari. I am in shock at how much this portion of the safari has increased. Maybe 25 animals was too many??? Being Canadian we have the old rule now being followed of possibly/probably shipping to a taxidermist for the Canadian dip and pack/cleaning process, this adds possibly $150 per species. Wow Need this figured out!!

Dip and pack plus shipping was around 2300 for 6 animals out of Namibia to Chicago. Then around another 200 for a taxi to inspect in the USA. Plus to ship capes and horns to your house. Price will continue to go up. Best advice is just to keep the skull and horns unless you kill a monster then keep the cape. Flights and dip and pack will cost just as much as the hunt it's self. Good luck
M

I have investigated more, prices seam to vary wildly. I like Dennis's post above and am trying to use his numbers as a guide. He deals with this more in a month than I will in a lifetime so using his experience. Trophy fees and daily rates and even air travel have increased "normally". Hotels, dip/pack, freight, and the extras in a safari seam to have gone over the top with price increases. Things are different being Canadian and also being on the less populated/abandoned far west coast. Lots more options in interior Canada. Any off you Canadian hunters who have recent first hand SA dip and pack, tan, shipping info, feel free to jump in or PM me.

Just got our shipping quote back from August hunt in RSA.

Swift Dip was $190 per animal, regardless of style (horns or skulls, full hide, cape, or backskin) and no additional fees such as packing or crating.

SCS (Safari Cargo Systems) is our shipper, and combining all 3 hunter crates to one shipment from Johannesburg to Dallas. $2193.55 total. All animals will be shipped as skull/horns, cape, and back skin. Crate 1 has kudu and black wildebeest. Crate 2 with two Gemsbok, one each impala and springbuck. Crate 3 had one each impala, blue wildebeest, black wildebeest, red hartebeest, and blesbuck.

Local taxidermist handles the pickup and clearance at no charge (if they're doing the taxidermy work).

Just under 4 months from hunt completion to ready to ship. Estimated 6-8 months for taxidermy work still to come.
M

I was hoping a fellow Canadian with some current first hand knowledge/recommendations would jump in with names, advice and specific details to give me assistance. I have researched a ton, sent emails and received a few quotes, some are in line with Dennis's numbers above and seam OK but I worry that these companies are experienced with US importing but are "guessing" when it comes to first hand Canadian knowledge. I read twice the old thread here about Canadian import changes but am unsure of new real world info. I did call CBS but was told basically its up to agent who opens crate, if all IAW regs and paperwork perfect trophies could be released, any bad signs, paperwork issue or anti hunting person and shipment is sent for Canadian redo Dip and pack. Any one help?

I finally got an invoice to crate and ship my 8 trophies from Tanzania: one zebra hide, one cape buffalo shoulder mount, one oribi shoulder mount, and five European mounts (cape buffalo, heartabeast, reedbuck, impala, baboon). $2,092 to ship to San Francisco; a four month wait.
You must log in or register to reply here.

Things to Consider for the Cost of your Safari?!?!
2

News From and About Africa

Elephants: A Crisis Of Too Many, Not Too Few