Cape Town – Between 3 000 to 4 000 people are still displaced in Knysna after being evacuated from a fire that threatened to engulf the town this week, local authorities said on Friday.

"Some areas that were evacuated have been declared safe and people from those areas have been allowed to return home," said local government spokesperson James Brent-Styan in the latest situation report.

"In areas that have NOT been declared safe, people will not be allowed to return till the situation is safe," he said.

At least five people died during the fire – a family of three, a small child, and firefighter Bradley Richards among them.

"Each fatality is a new tragedy. We do what we can to prevent tragedies like this but the nature of these incidents are serious and often life-threatening. We are thinking of the emergency services personnel still in action, especially following the latest tragedy."

A second firefighter was also injured while fighting the blaze.

But as authorities work on restoring water supplies, communications systems and essential infrastructure, some families and friends are frantic about not being able to get hold of their loved ones in the area which is popular with retired people.

To help families in this regard, the Gift of the Givers has stepped up to help locate missing people.

The charity's director Imtiaz Sooliman said they would set up a team to help worried families locate people they have not been able to make contact with.

"In the chaos, people lost their phones," said Sooliman.

Anybody who needs help locating a person can SMS a picture, the name and where the person lived, and relief workers will put feelers out to find them at the above number.

Sooliman said that people should also say on the SMS if the missing person has a medical condition and if they are on chronic medication.

Meanwhile, a misplaced people register has been set up on Facebook by volunteers at Eden/KnysnaFire Misplaced Persons Register.

A list of missing people is available on Found People - Reconnected with Loved Ones and they are marked found as they are connected with their loved ones.

There is also a list of evacuees available on A-Z People in known Shelters at 12h30 8th June - details to be added as we find info to help families make contact.

Facebook also activated its service where people can mark themselves safe.

Western Cape Social Development Department spokesperson Sihle Ngobese said staff and management of residential facilities for the elderly had reported to the department to say that everybody had been evacuated safely, and had been reported to their families.

Ngobese said social media had helped a lot in tracking down missing relatives.

One woman, Michelle Thomas, pleaded from Abu Dhabi where she works, for information on her father Lou, who was incommunicado.

Her Facebook friends immediately leapt into action, sharing information on where evacuees had been taken.

One suggestion was to call the National Sea Rescue Institute, which had evacuated many of the elderly people from the area her father lives in by rubber dingy through the estuary, to St James.

Eventually, a relieved Thomas posted that he had been tracked down.

Pictures of the Knysna fire uploaded by users on Twitter. 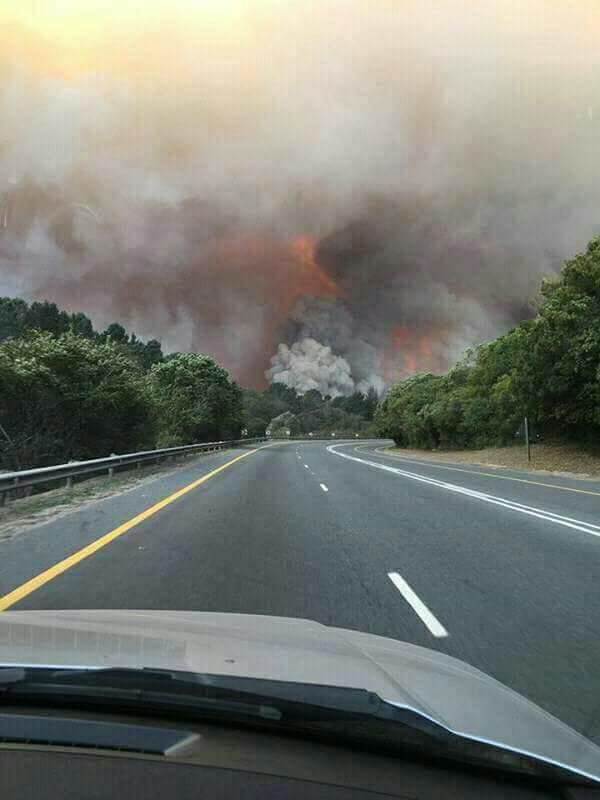 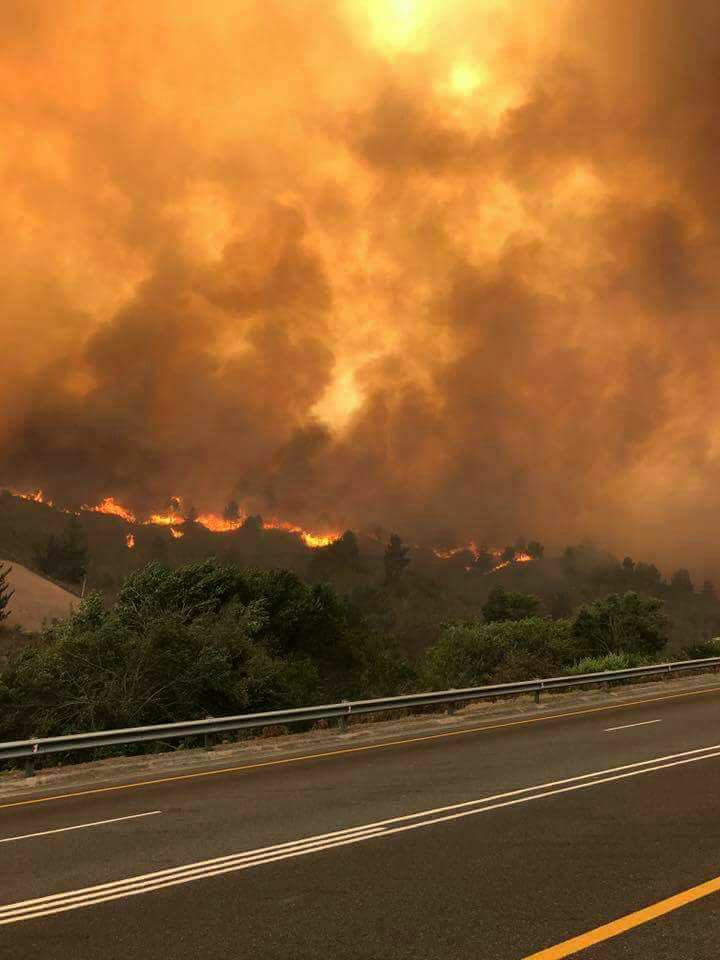 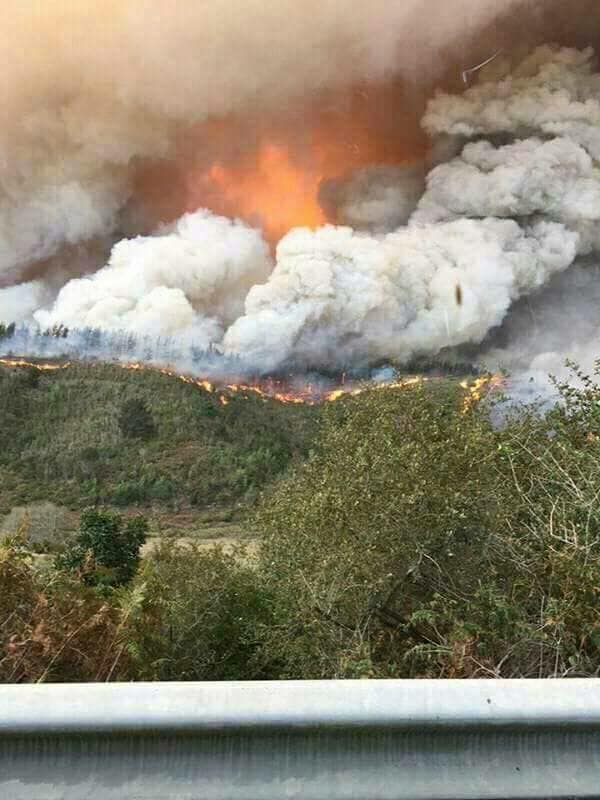 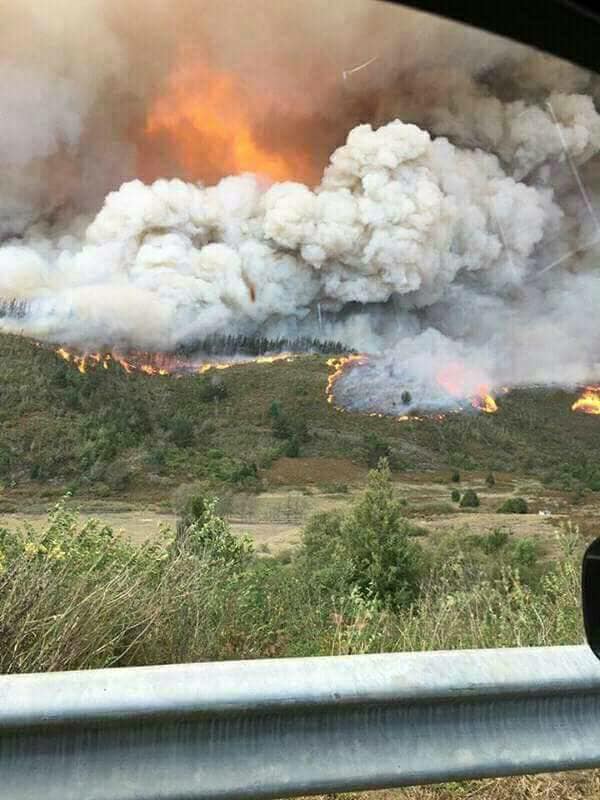 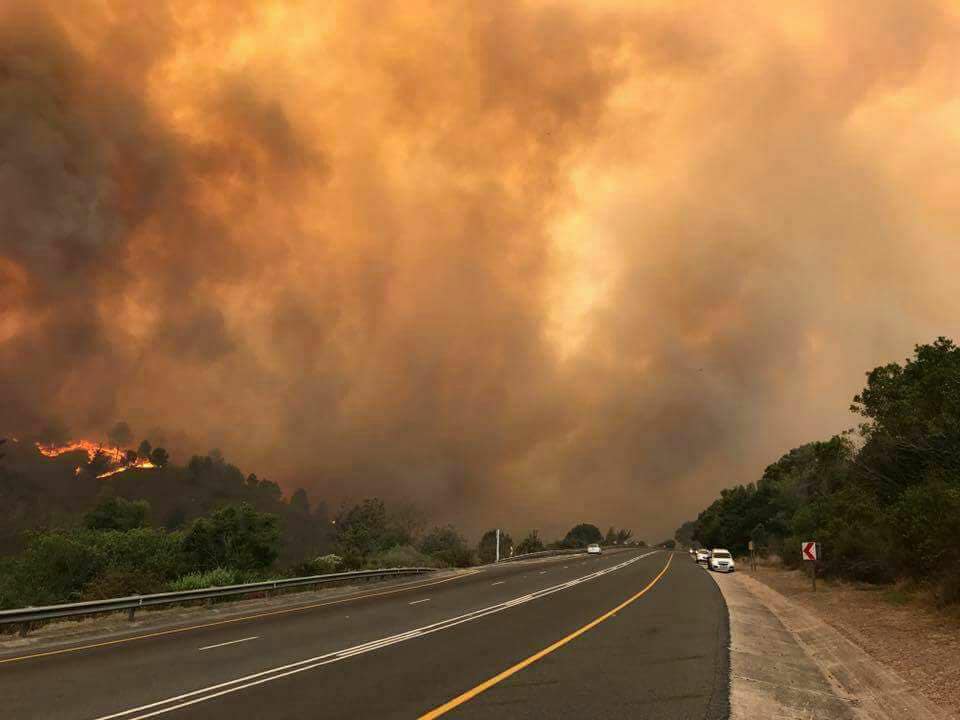 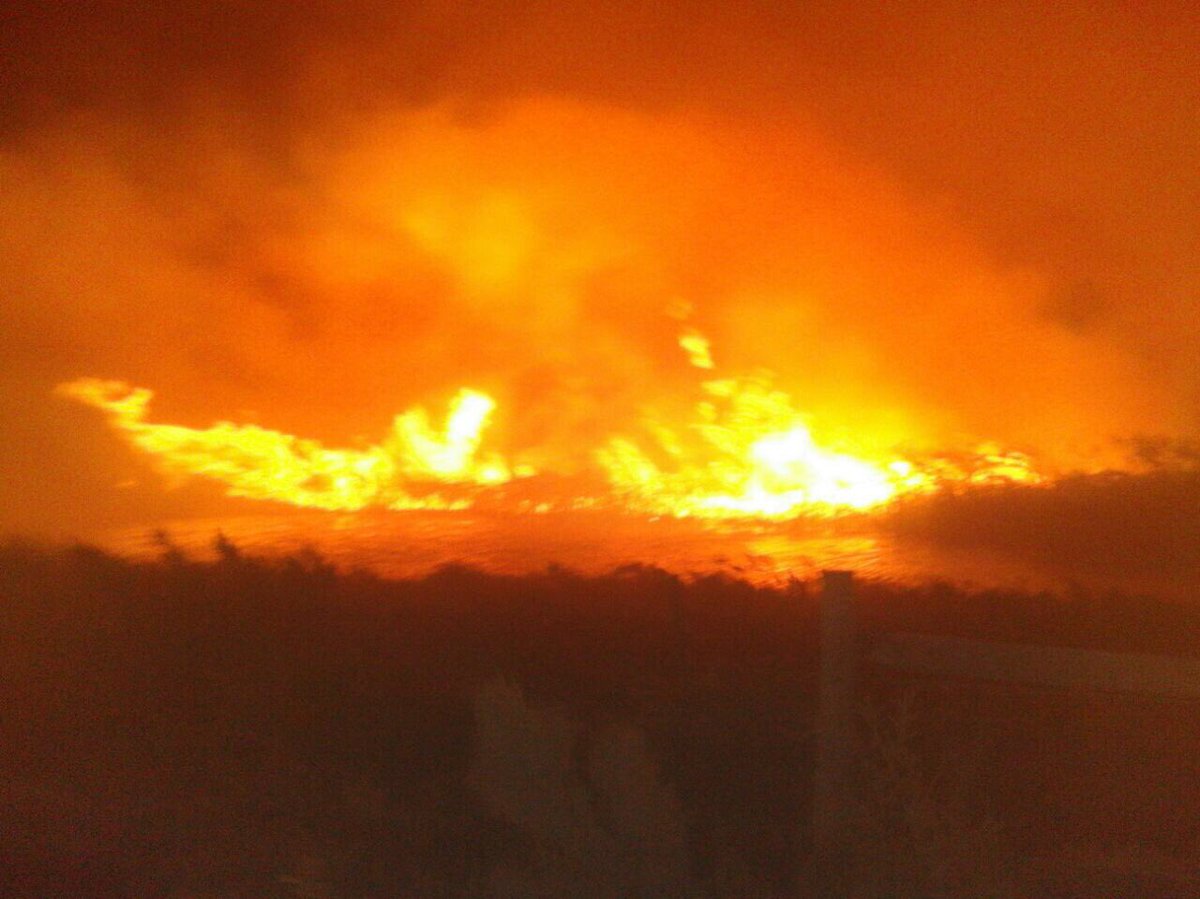 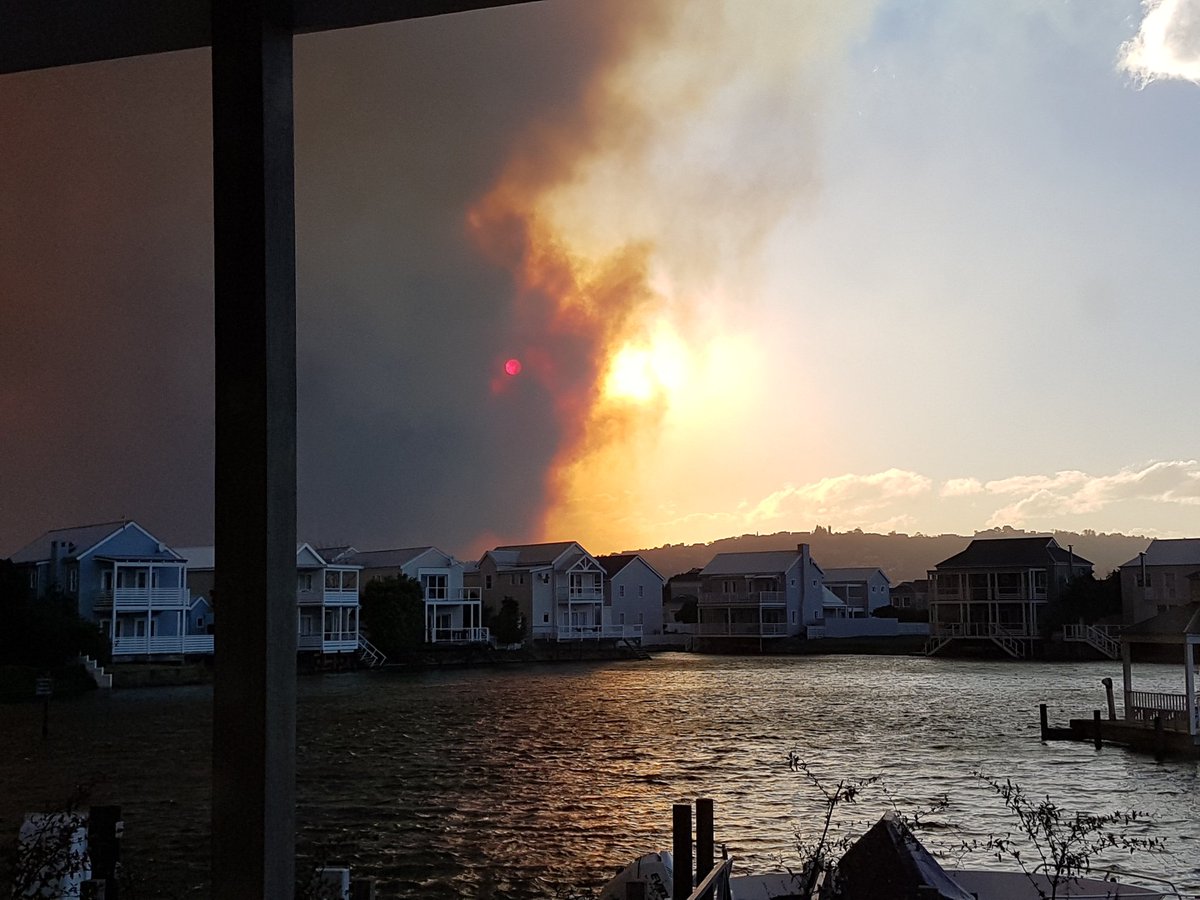 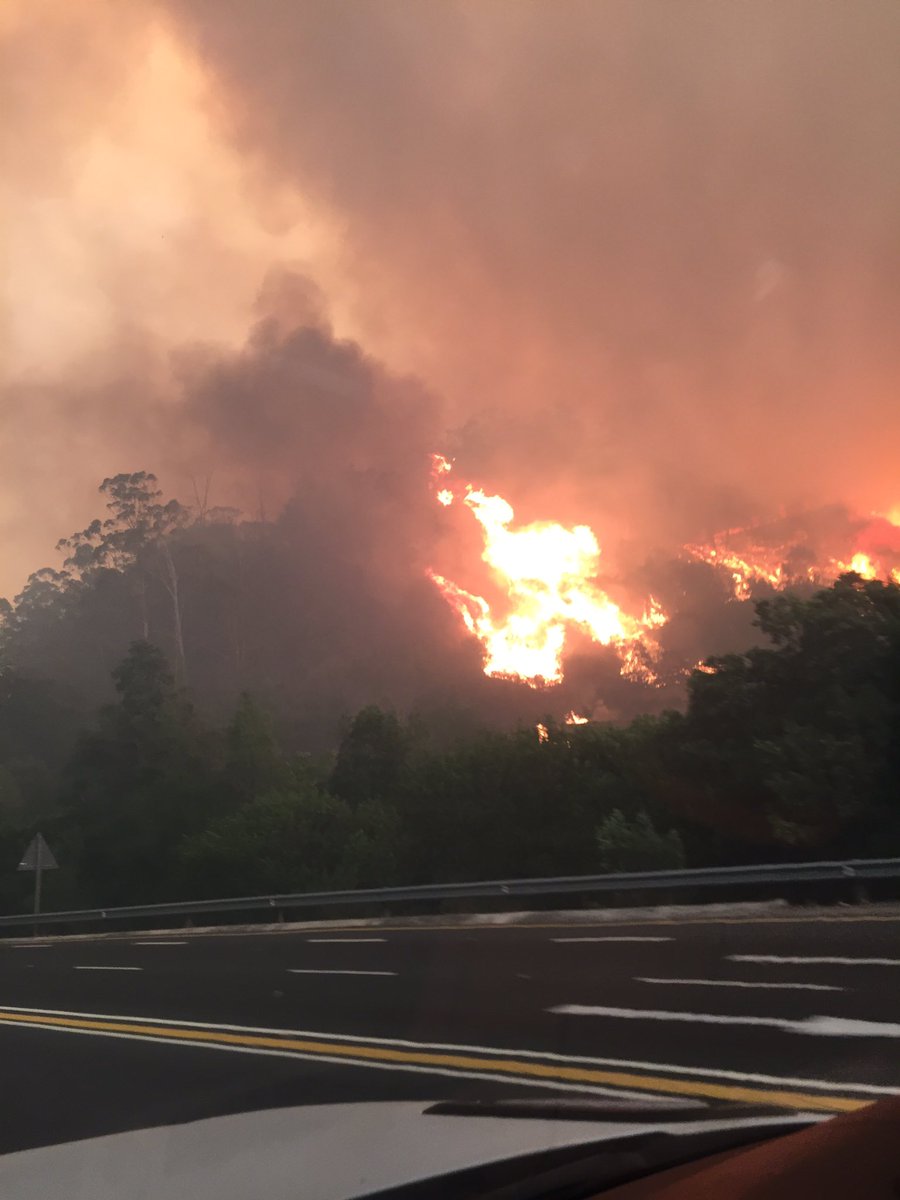 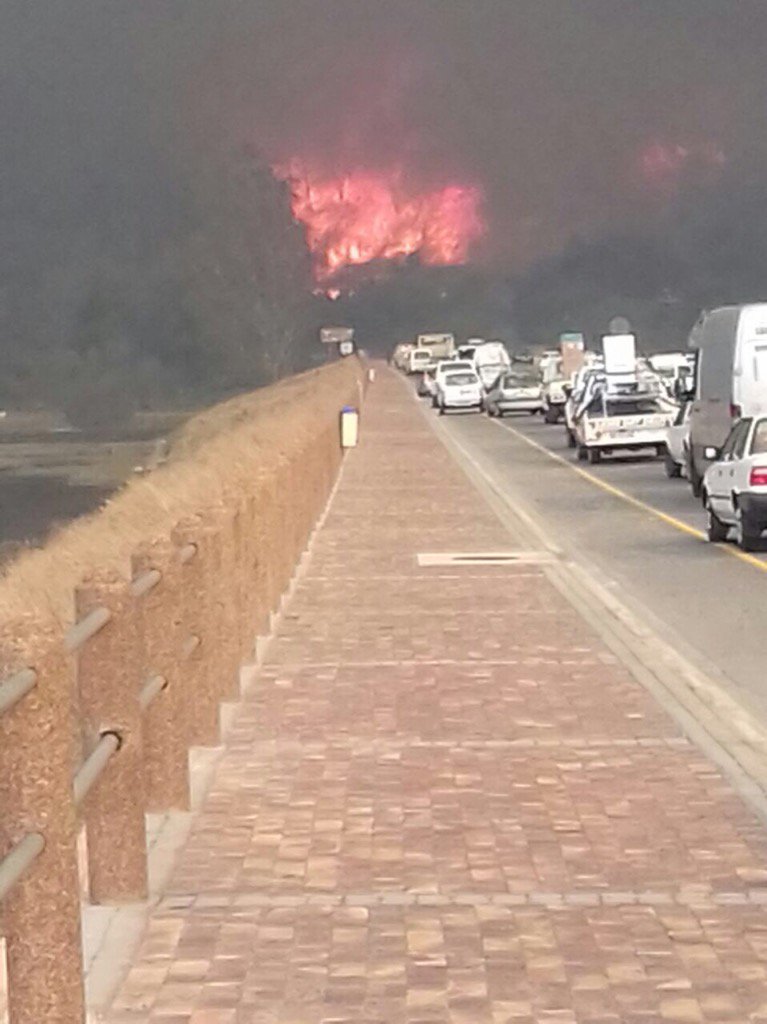 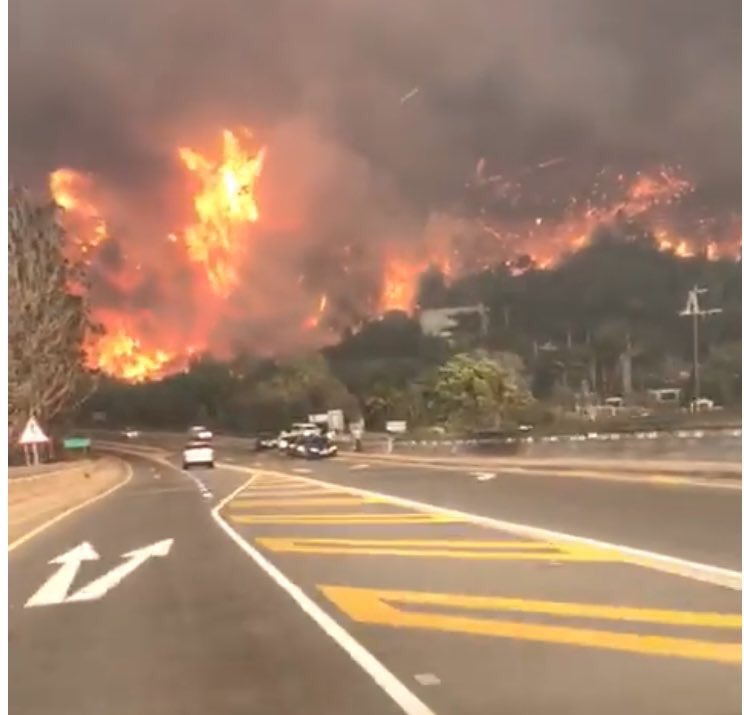 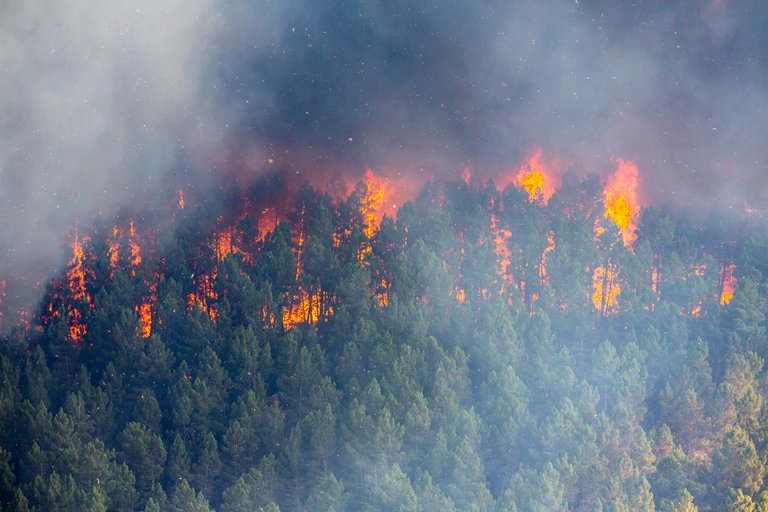 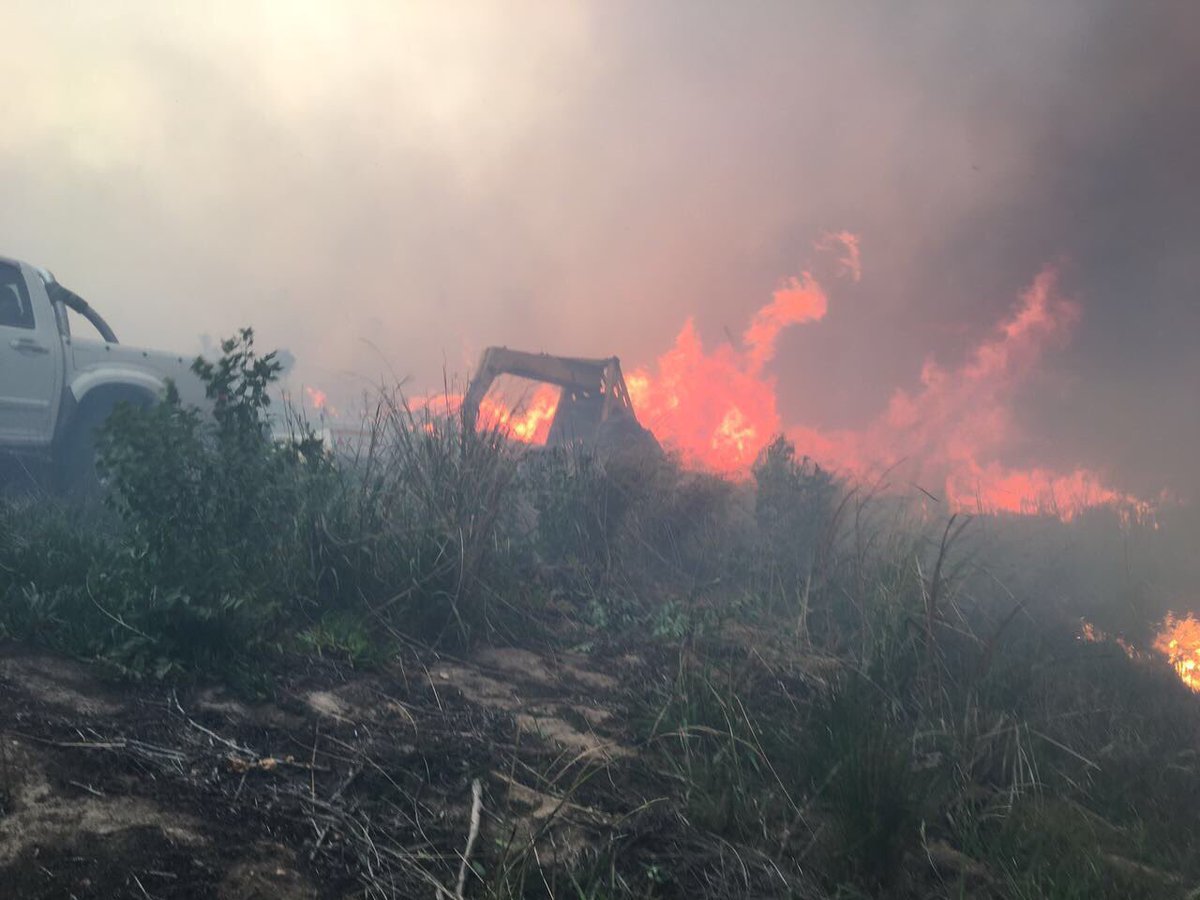 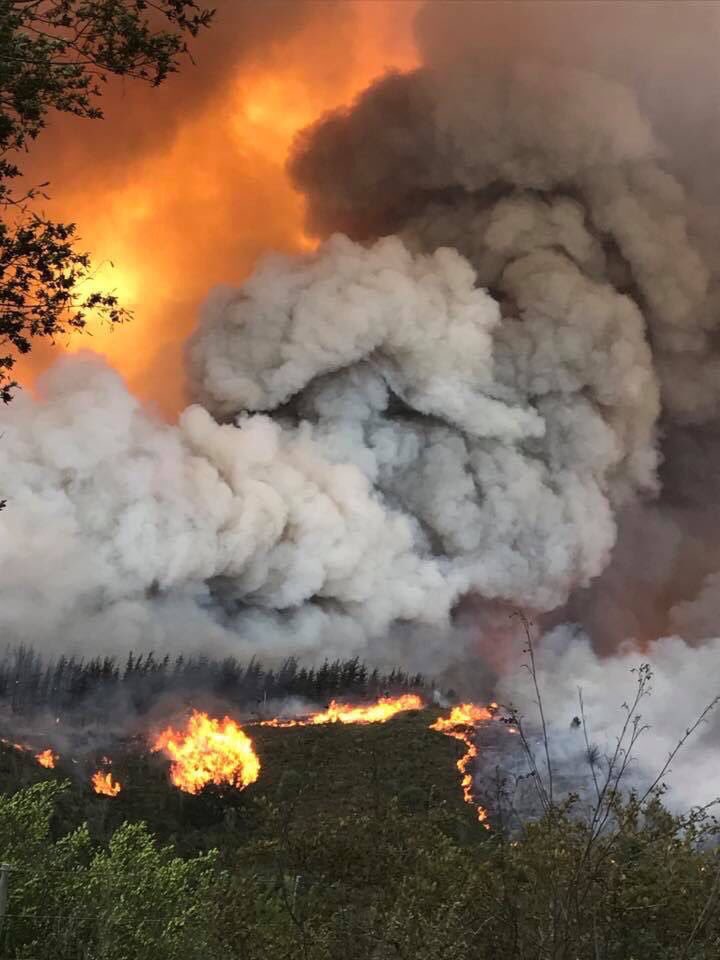 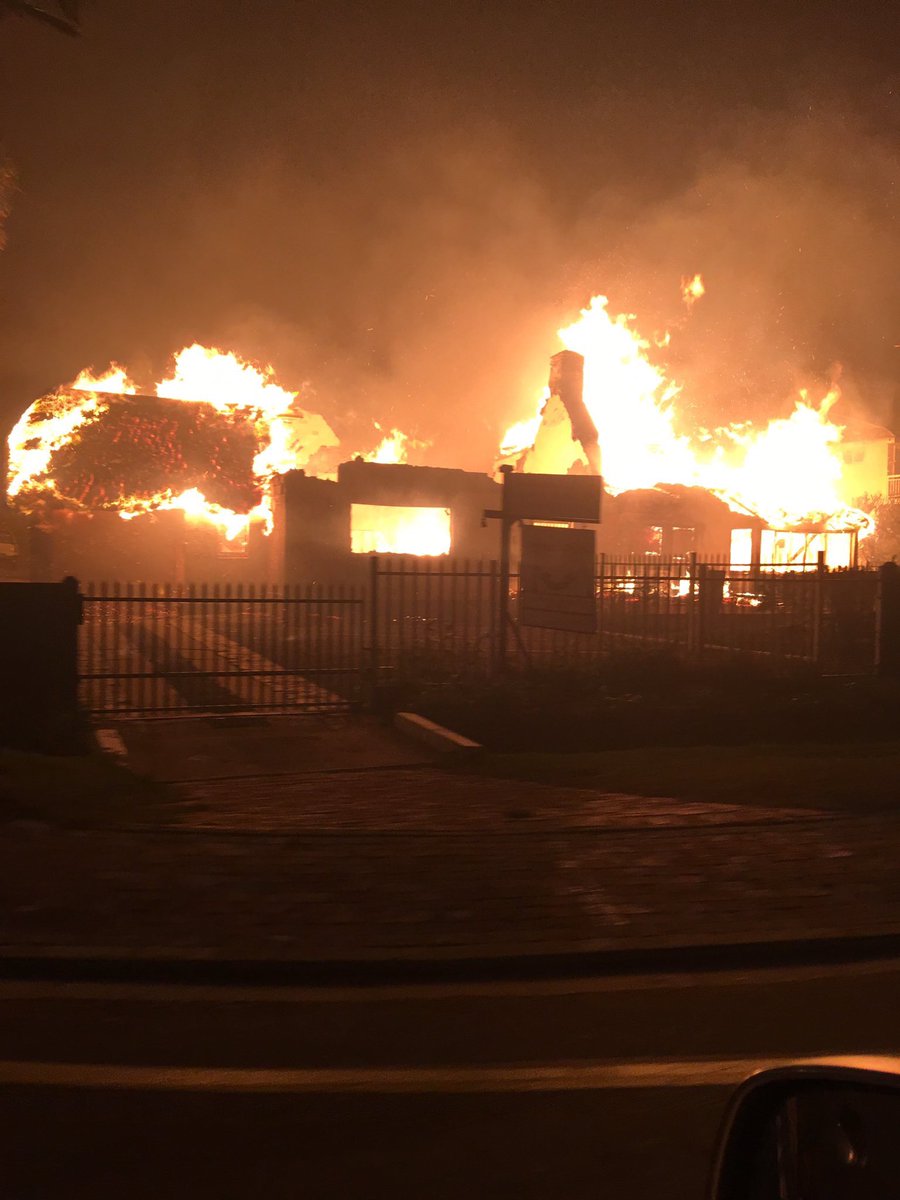 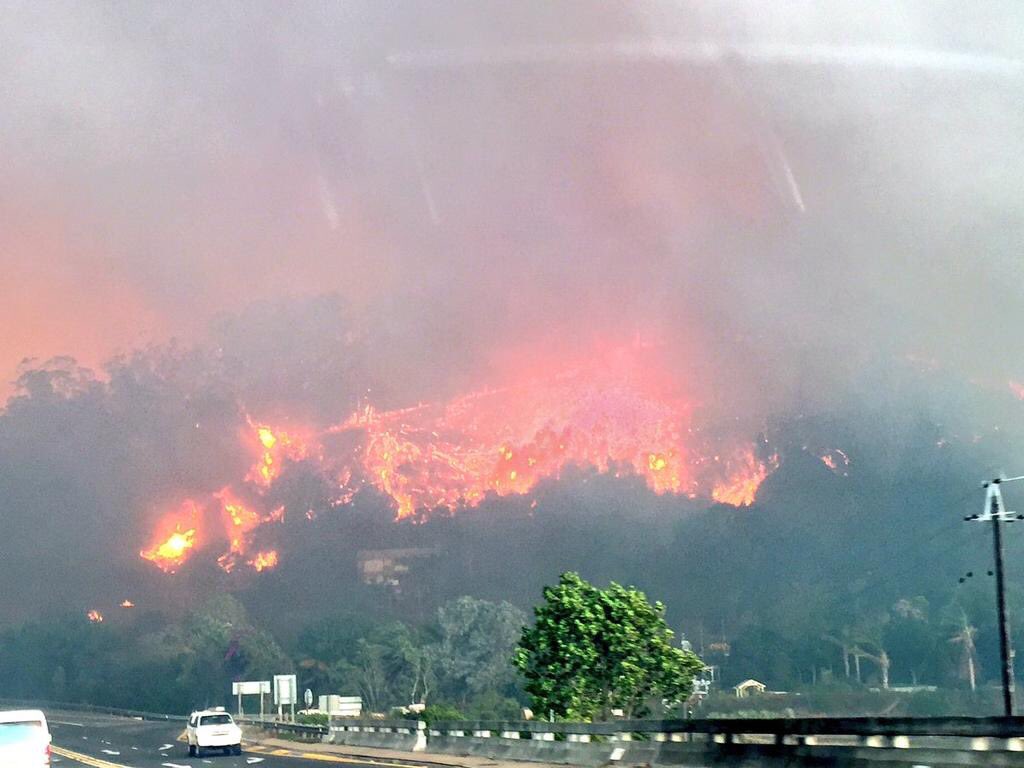 Well said, my friend. My thoughts and prayers go out to the people of Knysna, stay strong. Brings back memories of our Fort McMurray wildfire from last year. A fire such as this affects everyone not just a select few.

Are these arson cases trying to drive people from the land?


Are Knysna fires the result of arson?
By Katharine Child and Farren Collins

On Tuesday‚ it was reported fire fighters were battling 26 separate fires in the Knysna area.

Klatzow said an investigation was needed whenever there were multiple fires simultaneously.

He said arson is not suspected or being investigated.

More than 10‚000 people have now been evacuated from various Knysna suburbs and 150 homes destroyed by flames fanned by heavy winds.

“It is unusual for fires to start simultaneously‚” said Klatzow‚ one of the leading fire investigators in the country.

He said “hard questions needed to be asked“.

“When you start an investigation‚ you need an open mind. You start looking for an innocent source [for a fire]. You look at negligence such as cigarettes tossed away and carelessness….somebody who was welding‚ a camp fire not put out properly.

“There could be an Eskom power line that fell down and short circuited. This could start two fires.”

But he said “once there are three‚ four‚ five‚ 20 fires [ at the same time] you need an investigation [into the cause of the fires]“.

News 24 previously reported an acting municipal manager Bevan Ellman as saying that fires in Knysna in December were arson.

Children who started them returned to help firemen put out fires‚ according to Ellman.

Some of the fires in Cape Town in the past year have been arson‚ said Klatzow. Some were caused by negligence.

A fire in January this year in Signal hill was arson‚ according to JP Smith‚ member of Cape Town’s mayoral committee. A teenage boy was identified by Bo Kaap locals as starting the Signal Hill blaze.

When several fires broke out in the Western Cape in January‚ Premier Helen Zille also asked if the fires were the result of arson.

Absolutely horrible situation! I truely hope this tragedy does not escalate.

I just want to give the creator of this video

This guy is a part of the solution, and I hope his message gets out.
"When my friends tell me that I have led a remarkable life, I have to admit having done my best to make it so" - John Kingsley-Heath

Thoughts and prayers to those families

The fires are bad enough that it made our local news this morning.

I wish the firefighters good luck getting this one under control sooner than later.

Fires of this nature do a lot of damage and displace a lot of people, also have effects for years to come. Hope for the best for everyone

I have seen nothing about it here, I had to go look it up.

Thoughts and prayers for all affected!
John 3:16
You must log in or register to reply here.

Missing grandma found crushed to death by an elephant

Prayers for El Paso and Dayton