This article is from the South Africa Predators Association and certainly as such its motivation can be questioned. The suggestion of poaching of these animals will increase is perhaps a bit premature. But I do believe its worth keeping an eye on. The USFWS decision to ban lion imports and therefore curtail lion hunting resulting in the opposite effect on lion populations would be no surprise and of course expected by many. So if the black market value goes high enough, any supply of the cats will be targeted.

They miscalculated the amount of poison it would take and the big, husky male lion took too long to die. So they shot him.

"We heard the shots," a distraught Mr Christo Gomes told SAPA's media team. "It seems my foreman disturbed them."

The poachers fled, but had by then already hacked away the lion's head and paws. These body parts are presumably destined for the traditional African muti market.

Inside one of the handling cages, Mr Gomes and his staff found one of his lionesses. The poison had savaged her veins, arteries and internal organs. She was dead, but outwardly intact. The brutes had clearly lacked the time to mutilate her carcass to obtain her head and paws. Upon more investigation it appears that even some of the hyenas on Mr Gomes' farm had been poisoned.

Lion breeders are bracing themselves while conservation officials are keeping an uneasy eye on the situation. This is the third of these brutal incidents in less than a week. Once is an event and twice a coincidence; now there is real concern that these are the first occurrences of what could be a rash of lion killings. Is poaching coming to the domain of the lion?

While rhino and elephant populations have been decimated, South African lions have mercifully been spared the horror of poaching, largely due to the efforts of lion breeders. They had kept the price of lion products low by satisfying the relevant markets. There are now indications that poachers are finding the margins to undercut even the lion breeders. The question arises: what will the resultant impact be on the wild lion population?

According to the CEO of the South African Predator Association, Carla van der Vyver, the signs are ominous. "Security at lion farms has been designed to keep the lions in, rather than poachers out. Now that there is a real threat facing the breeders' animals, they will change their security strategies. Because it is much, much easier to protect captive-bred lions, it is reasonable to assume the poachers will then look to the wild lion population to source their products."

There is real alarm among lion conservationists that government will in response follow the same devastating procedure as with rhinos. Once teetering on the edge of extinction, rhinos, both black and white, were saved by the efforts of private game farms. These farmers bred and protected the rhinos, financing their efforts through judicious, sustainable hunting of the animals. Government, seduced by the sirens of animal rightists, intervened with a moratorium on rhino products, and all poaching hell broke loose. The farmers' revenue streams through the sale of trophy rhinos and rhino products were pinched off. They reluctantly, but swiftly, stood away from the conservation of these animals. This led to supply being outstripped by demand. It is heyday for the poachers and sad times for the rhinos.

According to Van der Vyver it is significant that the first lion poaching incidents came hot on the heels of the United States' Fisheries and Wildlife Services decree listing the African lion as a threatened species. This move brought uncertainty in the market with an expected decline in the number of lions hunted in South Africa. On the principle of total utilization of a hunted animal, the remains of lions killed by hunters were sold into the traditional market for use as muti. Fewer animals are being hunted, creating an escalation in demand. Poachers are exploiting the situation. If the game farms can no longer supply these products, the poacher is all too eager and able and will definitely step in to take up the slack. The USFWS' fine intentions have created grievous results. The lions will continue dying, many of them from precious wild populations.

Smuggling as an industry can only thrive in situations where legal production of a commodity is hobbled. The only way to smother poaching is to make their efforts unprofitable. Government should encourage the lion farmers to produce enough animals to make poaching unviable. Should government heed the incessant screeching of animal rightists, there will soon be no captive-bred lion industry. That would be a green light for poachers to devastate the remaining wild lions of South Africa.

Should that happen, the lion would become the new rhino. 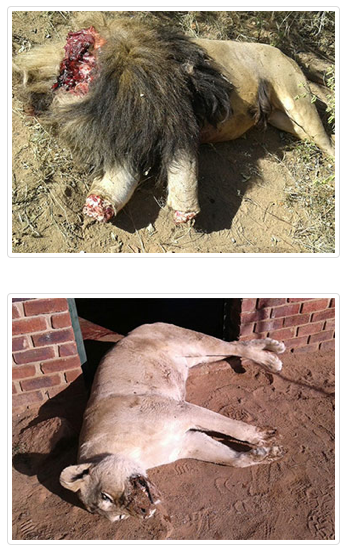 Thanks for sharing Phil
John 3:16

Phil this is an interesting watch situation. We have already heard of ranchers culling the numbers of lion and now this begins. I do hope this doesn't turn into the Rhino all over again. Thanks for sharing.

Sad times for lions. Thanks to the anti hunting morons thru out the world. Here again should the industry have a powerful public relations firm to put this news out to the public in its proper forums and social media outlets maybe just maybe public opinion can be altered. I've repeatedly expressed this thought , I hope someone in the higher ups can figure a way to implement it.
Tommorow is promised to no one. Go live your dreams.
You must log in or register to reply here.

Economy To Suffer If Lion Breeding Is Banned

Cervus elaphus Bob Nelson 35Whelen Cervus elaphus wrote on Bob Nelson 35Whelen's profile.
Hi Bob, how's things going in Wyong?. Down your way a couple of years back but haven't been in NSW since Ebor for the fishing. just getting over some nasty storms up here in Qld, seeing the sun for the first time in a few days. I'm going to NZ in the spring and hope to clean up a few buns while there and perhaps shake the spiders out of my old .303LE (currently owned by my BIL). Cheers Brian
Today at 8:56 PM •••
D
drbeech1968
A couple pictures of the sable i chased for miles in Mozambique, Coutada 9!! We finally caught up to him and I had the trophy of a lifetime. Mokore Safaris, Doug Duckworth PH