The Rhino bull was lying down under a Big Marula tree with his eyes closed and only his ears waving at the occasional fly that bothered him. We were 32 yards away seeking an opening from which we could safely launch an arrow into his lungs.

The stalk was hampered by a few Giraffe that followed us and stamped their feet every few minutes. This disturbed the half blind (tank) that we tried so hard to get close to. He wanted to be left alone and did not fancy the long necked animals that prevented him from having his siesta in the blistering February heat.

The wind was good. The Mopani flies were all over us and trying to get into our eyes, ears and noses to find some moisture. There was no clear path for the arrow if we wanted to stay behind some sort of cover. We had to wait for him to go to sleep in order to step around the bush we were hiding behind. That was the only option. We would be in full view if something went wrong and no where to hide or run. He seemed asleep but I wanted to be very sure about it and decided to wait a few minutes longer.

Finally we stepped out and around the small Buffalo-thorn tree we were hiding behind and suddenly felt very vulnerable as our last cover was gone. Funny how a few twigs and leaves makes you feel safe. It was now or never.

My client (Mr X) was on his first African Safari. For some reason he wanted to hunt the (Big Six) with a bow without working his way up through the normal plains game species. He told me that he was afraid that the time would pass for us to legally hunt these animals and that he was not prepared to wait. At the time I did not realize how true his feeling would be as this was arguably the last Rhino ever to be hunted legally in South Africa before the ban on bow-hunting thick skinned animals was introduced.

I was very concerned about the fact that he did not have any experience in Africa prior to this hunt. Not only was I responsible for his safety, but mine and my tracker,s lives relied on his ability to shoot one good arrow. Many inexperienced guys think that a White Rhino is not dangerous. Tell that to the 6 people that died by White Rhino attacks between 1998 and 2000 in South Africa.

Mr X had a good setup for this hunt. His arrows weighed 970gr and was tipped by the awesome 210gr German Kinetics broad heads. The bow was a Mathews Safari set at 88lb. I personally thought that it was too heavy for him after I had him shoot at the target a few times but he would hear nothing of it. He said that he could put the arrow in the kill-zone when the time arrived. I surely hoped that he could. I had him sign a contract that if I thought that the shot was not good enough, I would immediately put a .416 solid into the animal as backup. It was that way or no way as I have hunted these animals before and knew how tough they were.

The tension took its toll on him as he struggled through the draw. I thought that the arrow rattling on the rest would surely alert the bull as they have very acute hearing. The distance was now only 28 yards. (Keep your mouth shut) went through my mind when I spotted a Crowned Plover not 10 yards from the sleeping Rhino. These birds have the habit of making a huge noise when they are alarmed. With sweaty palms holding my rifle at the ready I watched him settle into his anchor point. I clearly remember the Plovers voicing their disapproval as the arrow hit the Rhino with a dull (thud).

He came to his feet in a fraction of a second and charged the way he was facing. The only evidence of the arrow was a white feather sticking out 3 inches from the very thick skin that covered his shoulder. We were frozen to the spot as we really did not want any of his attention.

I heard him crashing trough some scrub before the bush became silent. Even the ever present flies disappeared. I sat down and lit two cigarettes, passing one to my tracker. Mr X was craning his neck to see where his Rhino went.

(Sit and be quiet) I said to him. (Now we wait for 30 minutes). The adrenalin was racing through our vanes and all of us were breathing heavily to get some oxygen in our systems. Half an hour later my tracker took the blood-spoor with me right next to him scanning ahead. Mr X was a few feet behind me. Less than a hundred yards further, I spotted a huge grey body to our slight left. Slowly we crept closer until we were within bow-range again.

Mr X could not draw the bow again to put a second arrow into the Rhino just to make sure he was dead. My tracker threw a rock at the Rhino. Nothing! He was dead.

I suddenly felt weird. I always get this feeling when we hunt one of Africa's great monarchs. It is a sad-like feeling that I can not explain.

After the customary handshakes and photos were done, we started the real work. Near the place were we hunted was a rehabilitation programme that looked after and treated Hyena. They were looking forward to receiving two tons of meat that would go a long way to feed them. The programme relied heavily on us to supply them with meat for the animals they cared for. This Rhino would surely help their plight. 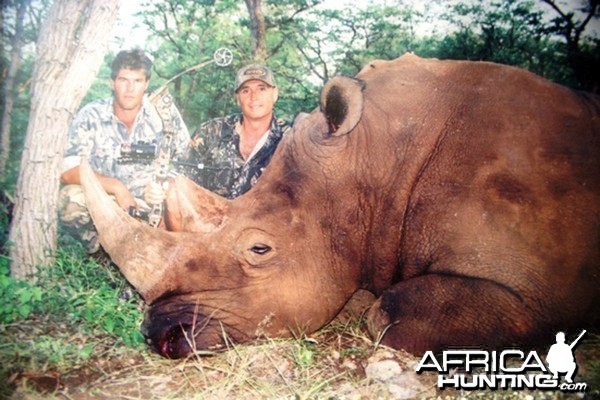 It is such a pity that greed and ignorance was responsible for the law against bow hunting these animals as I am sure that it can be done in a safe and responsible way that will further the cause of the specie. Not only are we equipped with ever better equipment. We are realising the importance of doing it in an ethical way to help us educate those that do not understand our passion.

Hopefully we will all work together as bow-hunters, to safeguard our sport/profession or hobby, so that those that come after us can enjoy it as much as we do and not only read about it in the past tense.

This was Nr.7 that I guided with a bow. I do not know if I shall ever be privileged to hunt a Rhino again in this manner. All the other heavies can be hunted in other countries. The only place where Rhino can be hunted is on our own doorstep and we better make sure that we do it right.

Fritz Rabe
Askari Adventures / Fritz Rabe Bow Hunting
Last edited by a moderator: Dec 1, 2016
You must log in or register to reply here.