The Evolution Of CITES

Willem Wijnstekers, a former Secretary General of CITES participated in CoP 17 Sandton/South Africa in the team of the CIC International Council for Game and Wildlife Conservation. Here is his report on African hunting related matters discussed at CoP 17. Willem is also the author of “The Evolution of CITES”, now in its 10th Edition launched in Johannesburg during the CIC Press Conference “Keep Calm and Let Africa Speak“. 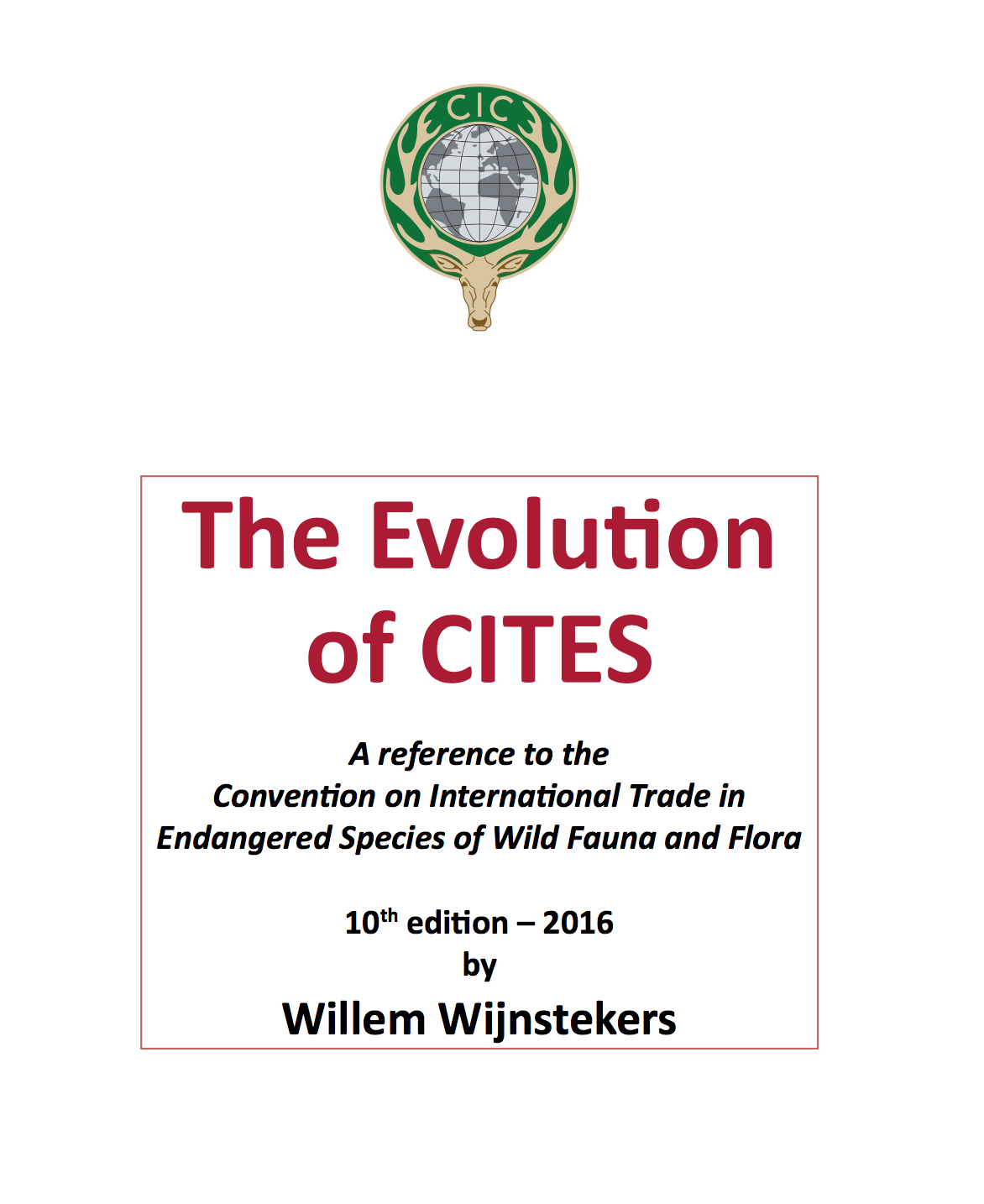 The EU proposed a far-reaching set of proposals containing a series of new requirements and conditions for the international movement of hunting trophies. South Africa made a counter proposal with less conditions. The two (together with Canada, which made a number of amendment proposals to these texts) in a small working group discussed and agreed on a common proposal, which was then unanimously adopted by CoP 17.

The new set of ‘rules’ in a nutshell:

CONTROL OF TRADE IN PERSONAL AND HOUSEHOLD EFFECTS

A second EU proposal was to amend Resolution Conf. 13.7 (Rev. CoP16) on the Control of trade in personal and household effects. At CoP16 it was already decided that for the export of rhino horn or elephant ivory contained in hunting trophies export permits are required. CoP17 unanimously adopted the following addition:

A strange thing happened with the Annex to Resolution Conf. 13.7, point 16 of which states that hunting trophies are personal effects (and are thus exempted from the issue of an export permit if both the countries of export and import apply the exemption).

This paragraph was deleted and now only notes that the export of rhino horn and elephant ivory contained in hunting trophies does not qualify for the personal and household effects exemption. This implies that all other Appendix II hunting trophies do qualify for the exemption, but this is made meaningless because the provisions of the newly adopted Resolution as well as the revised one require an export permit anyway.

On top of this, the EU, the USA and a number of other countries will maintain their legislation requiring an import permit for personal effects.

PROCEDURE TO REVIEW THE QUOTAS ESTABLISHED FOR LEOPARD SKINS

A third proposal was adopted under this agenda item with regard to a procedure to review the quotas established for leopard skins: Parties, which have quotas, established under Resolution Conf. 10.14 (Rev. CoP16) are requested to review these quotas, and consider whether these quotas are still set at levels which are non-detrimental to the survival of the species in the wild, and to share the outcomes of the review and the basis for the determination that the quota is not detrimental, with the Animals Committee, which may lead to proposals for amendments at CoP18.

A working group drafted the following decisions: Subject to external funding, the Secretariat shall, in collaboration with African lion range States, the Convention on Migratory Species and IUCN:

The Standing Committee shall, at its 69th and 70th meetings:

African lion range States are encouraged to collaborate in implementing the decisions.

All Parties, governmental, intergovernmental, non-governmental organizations, donors and other entities are encouraged to support the African lion range States and the Secretariat:

Transfer of all populations of Lion to Appendix I: A working group proposed the following Decisions instead:

South Africa: Transfer of the Cape Mountain Zebra from Appendix I to Appendix II.

The proposal was adopted by consensus.

Swaziland: Permit trade in white rhino horn from natural deaths or recovered from poached Swazi rhino as well as of future harvest of a limited number of animals: The proposal was overwhelmingly rejected.

Namibia and Zimbabwe: Unqualified listing of Elephant in Appendix II by deleting current restrictive annotation: The ‘threat’ that the countries concerned would ignore the restrictive annotations if the proposal would be rejected was considered as blackmail by many and clearly had a counterproductive impact: 27 Parties voted in favor, 100 against, and 9 abstained. Note that Botswana indicated to have banned ivory trade (probably including trophies) until at least 2024.

Transfer of populations of Botswana, Namibia, South Africa and Zimbabwe from Appendix II to Appendix I: This proposal even had, not surprisingly, a worse outcome than the previous one: 21 Parties voted in favor, 107 against, and 11 abstained.

[1] This was brought in during the COP by Canada, which creates an exemption for itself to issue export permits for hunting trophies exported to the USA and vice-versa. An intervention by CIC was made to have the word neighboring in the text in italics above deleted. This would have given for example Southern African countries the possibility to make bilateral arrangements with for example the EU and the USA. The proposed amendment was supported by Mozambique, Namibia and Zimbabwe. The European Union, India and Kenya opposed this.

[2] The bottom line of this is that for all Appendix II hunting trophies an export permit is required, as is also the case under the new Resolution discussed above, with the likely exception for Canada-USA exports.

Just curious, is CITES pronounced with a long I sound and one syllable or with a short I sound and two syllables?

I believe its pronounced "cities," like the "cities of Chicago and New York."
You must log in or register to reply here.

A Reflection Of CITES COP17 By Local Hunters

Will CITES Fail Africa For The 44th Year?

CITES – A Flawed Convention That Does Wildlife Conservation No Favours