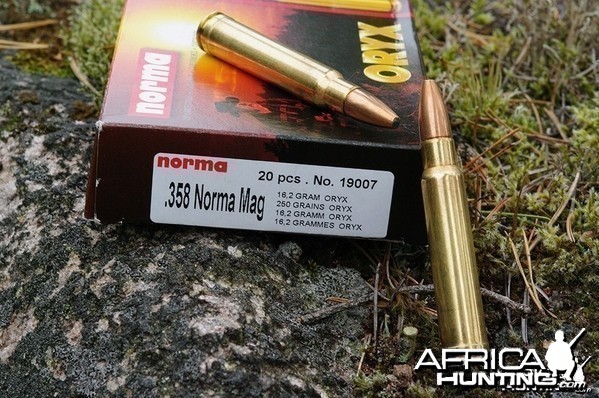 I make no apologies for preferring a bigger gun when big game hunting, and shield no secrets that I like .35 caliber rifles. I own rifles in all the current .358 cartridges with factory ammo still available. (There are not that many!) I also have a couple of Mark Bansner-built custom rifles in 35-caliber wildcat cartridges; one on the Remington Ultra Mag case and another on the Winchester Short Magnum case. I even have a few of the old timers like the .351 Winchester Self Loader. I feel safe in saying that for the cartridges available today in factory ammo, the .358 Norma may well be the best of the lot.

The 13th edition of Cartridges of the World lists the .358 Norma in the European Sporting Rifle Cartridges section, even though it was developed for the American market. I suppose that's a step up over previous editions which listed it, erroneously, as "obsolete."

Factory rifles were made for this cartridge by Husqvarna of Sweden and Schultz & Larsen of Denmark. Rifles are currently available in the U.S. from custom makers or from small rifle producers like E. R. Shaw.

Big mistake, if you ask me.

Had Norma been able to persuade any of the larger American rifle manufacturers to make rifles in the .358 Norma when it was developed, the cartridge would probably have given the .338 Winchester a serious run for its money. The cases are nearly identical but, due to the ratio between the bullet diameter and the case capacity, the .358 Norma can push bullets of the same weight a little faster.

The .358 Norma is an excellent all-around cartridge for big game. It may well be one of the best elk and moose cartridges ever conceived and it will handle any game in North America, including the big bears, with ease. It's also a great choice for the larger African plains game like kudu, zebra and eland.

In fact, it's a good all around cartridge for any big game hunting and I know from experience that it is not out of place shooting whitetails, hogs or black bears.

Norma currently offers two factory loads. One is a 232-grain full metal jacket with a muzzle velocity of 2,625 fps and designed for target practice. The other has a 250-grain Norma Oryx bullet. I have used the bonded core Norma Oryx bullet, in this cartridge and others, extensively in the U.S., Africa and in Europe and it performs very well on big game.

The 250-grain Oryx load produced a MV of 2,825 fps from my E. R. Shaw rifle's 24-inch barrel. This is faster than the advertised 2,756 fps, which is a phenomena you don't often see with factory loads and a testament to Norma's quality. Five, three shot groups averaged 1.1inches from that rifle.

Like all 35-calibers, the .358 Norma is misunderstood. It seems that American shooters often think that a 35-caliber cartridge is for short range hunting only, but with the .358 Norma they could not be further from the truth.

When handloading the cartridge and using the some of the polymer tipped bullets available like the Nosler 225-grain AccuBond or the Barnes 200-grain TSX the .358 Norma actually shoots flatter than many .300 Winchester loads and always carries more energy.

Why risk an important trophy with a lesser cartridge?
Last edited by a moderator: Dec 1, 2016