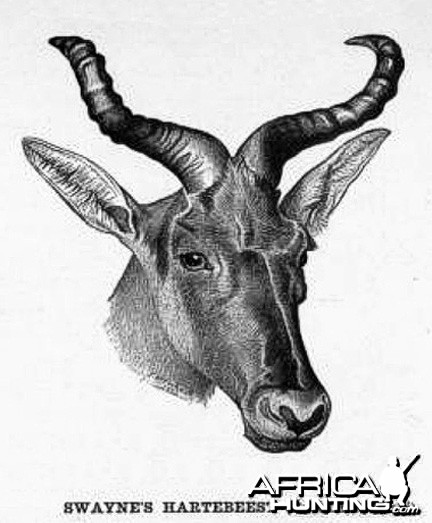 Ethiopia is one of the few countries in the world, which possess a unique and characteristic fauna with a high level of endemicity (World Conservation Monitoring Center (WCMC), 1991). Ethiopia is endowed with extensive and unique environmental conditions ranging from Ras Dejen (altitude 4600m) to Dallol (altitude 100). This large altitudinal and latitudinal range makes Ethiopia an ecologically diverse country and home of several unique habitats. 277 Mammalian species are known in Ethiopia of which 31 Mammals species are endemic. Swayne's Hartebeest is one of the 31 endemic mammals of Ethiopia. However, due to man-made and natural resources degradation processes, these wildlife resources have largely been restricted within a few protected areas of the country. These include 9 National parks, 3 Sanctuaries, 8 Game Reserves and 18 Controlled Hunting Areas. Except few, most of the protected areas are found only on paper. Background Information about Swayne's Hartebeest Alcelaphus buselaphus swayeni (Amharic: Korkay): The hartebeest was first named by Pallas in 1766. Hartebeests belong to Class Mammalia, Order Artiodactyla, Family Bovidae, Subfamily Alcelaphinae, Genus Alcelaphus. The hartebeest is described as probably the strangest looking antelopes as they appear to be part buffalo, part horse, and part antelope. It is no wonder that its scientific name is derived from the Greek word alke (the elk), elaphos (a deer) and bous (a cow), aptly reflecting the strange appearance of the Alcelaphinae antelopes. The hartebeest, Alcelaphus buselaphus, was originally found in grassland throughout the African continent (Nowak, 1991). It ranged from Morocco to northeastern Tanzania and south of the Congo; and also from southern Angola to South Africa. Hunting, habitat destruction and foraging competition with domestic cattle have drastically reduced its range. Now the hartebeest is found only in parts of Botswana, Namibia, Ethiopia, Tanzania and Kenya.

There are now seven recognized subspecies. Out of the seven subspecies, the Tora hartebeest of the Sudan and Ethiopia, and Swayne's hartebeest of Ethiopia are endangered because of small and declining populations. The bubal or northern hartebeest, which ranged north of the Sahara, slipped unnoticed in the early years of the 1990's. The horns carried by both sexes, spread into the wide graceful brackets. They are heavier in the males with more pronounced knobs. Horn shape and growth vary with age, but at maturity the horns generally diverge widely from the pedicel and the points are usually turned back.

By the 1960s Swayne's Hartebeest was thought to be extinct in Somalia and remained in only very limited numbers in Ethiopia (Bolton, 1973). At present Swayne's Hartebeest are found only in four localities in Ethiopia. Namely, Awash National Park, Senkele Swayne's Hartebeest Sanctuary, Nechisar National Park and Mazie Wildlife Area. In May 1974 the Ethiopian Wildlife Conservation organization (EWCO) caught and translocated 210 hartebeest from Senkele. 90 of these animals went to the Awash National Park and 120 to Nechisar. Unfortunately none of the translocated animals were marked for later identification and detailed monitoring of the eventual success of the operation was not possible. It appears, however, that only few of the translocated animals have survived (Stephenson, 1975; Tesfaye Hundessa, 1997). 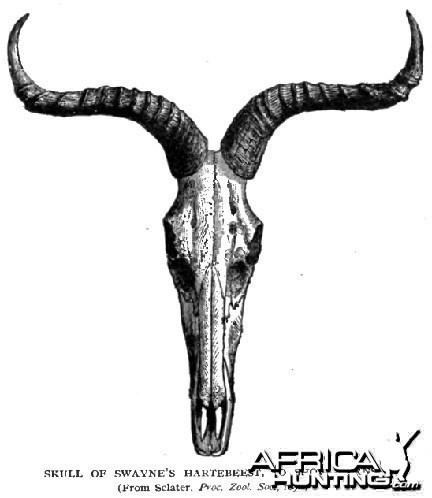 This animal was previously found in both Somalia and Ethiopia, is now restricted only in Ethiopia. The Status of the animal is classified as å¦¬mminent danger of extinction" by IUCN (IUCN, 2002). The Swayne's Hartebeest are in greater danger of extinction now than any other time in the past. Its range in all over four sites in Ethiopia, threatened by further loss of habitat for the sake expansion of agriculture and livestock overgrazing. Although poaching, illegal hunting and uncontrolled wildfire are the main threats to the survival of the animal. In 2001 around Senkele Swayne's Hartebeest sanctuary and in 2002-2003, around Awash and Nechisar National Park as well as around Mazie Wildlife Area ground total counts of wildlife both at wet and dry seasons were performed. The total count of the Swayne's hartebeest of in above mentioned areas result showed that the maximum number of Swayne's hartebeest counted was 550 during the dry season and the minimum counted number was 468 during wet season. The census result of Swayne's hartebeest of four protected areas showed that there is unequal sex ratio in the population. The ratio of Adult Male to Adult Female was 1:1.9 and 1:7 during wet and dry seasons respectively.

Source: 5th Annual Sahelo-Saharan Meeting, Tunisia, 2005
Last edited by a moderator: Dec 1, 2016
Gerhard R Damm
AFRICAN INDABA - Dedicated to the People & Wildlife of Africa
You must log in or register to reply here.

Six Elephants Killed In One Day By Poachers In Ethiopia