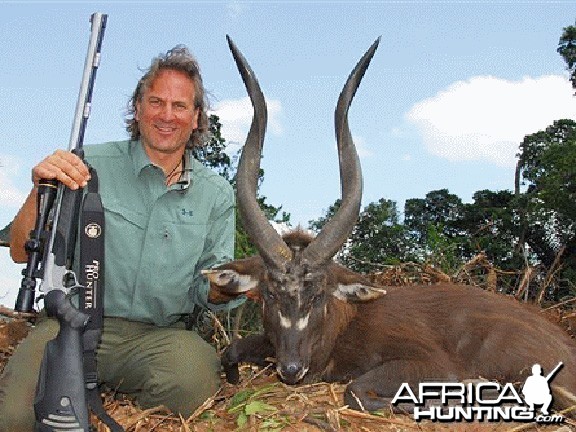 Rowland Ward's Records of Big Game contains the following reference to Island Sitatunga (Tragelaphus spekii sylvestris), æ³¥istribution the Sesse Islands of Lake Victoria (Uganda). The validity of this sub-species has not been fully established, as it is known that sitatunga swim across from the islands to the coast of Lake Victoria where they doubtless mix with the mainland population. It is true however that certain specimens have horns more rounded in section rather than triangular, but it may be that the differences between the island and mainland forms will prove to be individual rather than of sub-specific character.?/em>

There are only 38 entries in Rowland Ward's Records of Big Game of which the biggest, according to the current measurement method (around the spiral), is 26 ï½¾ inches which was shot in 1965 by Rudolph Sand. Many famous hunters have visited the islands to hunt this sitatunga. Colonel Meinertzhagen appears to be the most prolific island sitatunga hunter with three entries to his name, the largest measuring 25 ï½½ inches which comfortably beat the minimum entry level of 22 inches.

Last month the Uganda Wildlife Authority (UWA) reopened island sitatunga hunting after it had been closed for a period of 32 years. The first three hunters have come and gone. The first one went home empty handed after a two week hunt. The next two both shot excellent quality animals which, if the field measurements hold up, will be the new numbers two and three, respectively.

Both these animals were shot over dogs. In the first case, local dogs were used which physically captured and restrained a three legged sitatunga the fourth leg appeared to have been lost in a snare.

Poaching is rife on the islands and it has been estimated that as many as 200 animals a month are being taken and sold into the bushmeat market. A number of poachers have been employed by the hunting operation which should reduce this number significantly. The poachers use dogs to chase the sitatunga into the water where they are then speared or drowned while swimming. Peter Kennedy, a South African professional hunter, bought a set of horns for $15 - the going price payable to a poacher for a sitatunga - from one newly killed. The horns have been officially measured at 30 1/8 inches which make them the new world record.

The Sesse islands make up a chain of over 200 islands, both big and small. Sitatunga is the only game animal present on the islands which are almost all privately owned. The land owners have formed a body, organized by Mr. Bruce Martin of Lake Albert Safaris, to regulate the hunts and a quota of ten island sitatunga has been granted by UWA for 2009. The 14 day safaris are expensive. Steve Kobrine Safaris is the sole booking agent. 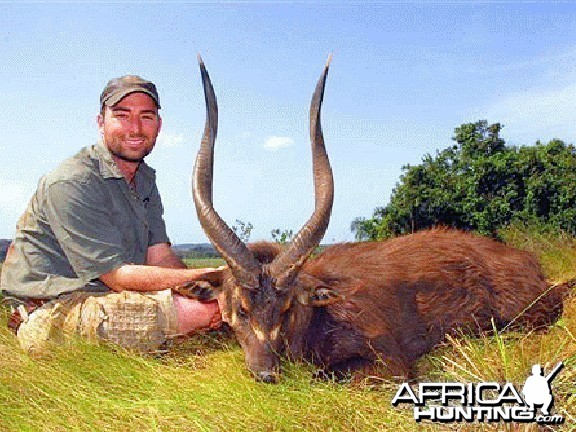 An old article but still an outstanding hunt and trophy!
You must log in or register to reply here.