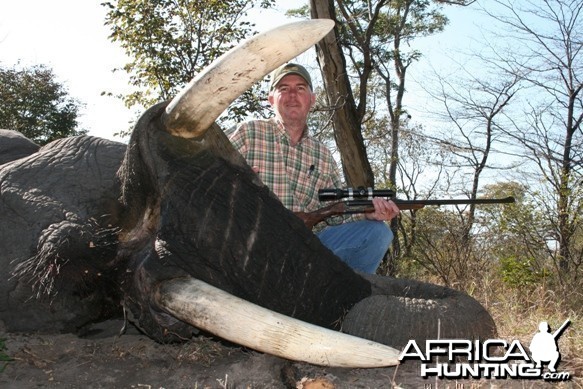 First off the scope is simply a better sight because it places the target and the cross hair on a single plain! Contrary to popular belief the human eye can only focus on one distance at a time. The iron sights ask the eye to focus on three distances at the same time, the rear sight, the front sight, and the target! This is impossible, though most who shoot open sights think they are doing just that! The fact is they are focusing on the rear sight only, and the rest are a blur! It works but is not as precise as is the placing a CLEAR crosshair of a CLEAR target! This has nothing to do with distance of the shot, but is simply a better designed sighting system!

On a double rifle the scope sight is normally the secondary, or specialized sight, while the irons are primary! The exact opposite of the scope on a bolt type hunting rifle! Both should be fitted with both types of sights! But the scopes on both should be mounted with quality quick-detach scope mounts so the scope can be removed, and replaced with absolute return to zero every time! With the doubles mentioned in the quotes above, either of those rifles could be used with the scope for almost all purposes, because they are both medium chamberings not big bore! Both are very good cartridges, and are very versatile hunting cartridges that will do things well far above their size, yet are very well suited to things like deer and plains game as well. These are two chamberings in double rifle that are most often seen wearing scope sights!

On the .400 cal and up scopes have a place as well, but are far less likely to automatically come with facility for scope mounting unless ordered that way or modified later! Still even 470 NE doubles can benefit from scope sights if properly selected and mounted for the purpose the rifle is to be used! The selection of scopes is far easier for a bolt rifle than for a double rifle. The bolt rifle can work properly with a very heavy scope, and/or mounted as high as it needs to be to make the objective bell clear the top of the barrel! This, however is not the case with a double rifle for a couple of reasons!

A scope mounted on a double rifle needs first to be as light as it can be, and still stand up to the recoil of the rifle, and the larger the chambering to more recoil you get!

This is because when a side-by-side double rifle is fired the sights are ON the aiming point, but the line of sight through the bore of the barrels is not! The BARREL TIME is the time the bullet is traveling down the bore to the muzzle, and is combined with the amount of flip in the barrel to position it to be pointing at the place where the sights were pointing when the trigger was pulled! Example: when the sights are aligned on the point of aim, the RIGHT barrel is pointing at a place on the target that is LOW, and on the LEFT of where the sights are looking, but by the time the bullet exits the muzzle it too is pointed at the point of aim. Which ever barrel is fired, that barrel will rise, and move away from the other barrel, so, anything that retards that movement will not allow the correct amount of flip to regulate! The higher the scope has to me mounted, and/or the heavier the scope the more it will effect the regulation. This is the reason small straight-tubed scopes are most often seen on double rifle, so they can be mounted as low as is possible and are usually aluminum to save weight to avoid retarding the flip! All this is the reason people who know double rifles never use a regular gunsmith to have a scope mounted on a double rifle, because most gunsmiths do not understand double rifle either.

Mounted properly a scope on a double rifle is a real benefit especially if illuminated, and low power! On a dangerous game double rifle the 1 power is perfect because it can be used up close with both eyes open, for things like elephant or charging cape buffalo where pin point bullet placement is a must to hit the brain, because nothing else will stop him when he is that close! Normally one removes the scope when going into the weeds with a wounded animal, but sometimes you don't have a choice because you may run into the animal before you expect to, and have to shoot with the scope attached. The power of a scope doesn't make long shots any easier, it only magnifies the target the hold over or under is the shooter's job. A perfect scope for a double rifle is the 1-4X28 Trijicon scope that uses no batteries but is illuminated by a combination of sun lighted fiber-optics in day light, and continued by Tritium in night or failing light! This scope is light, and with a small objective lens so it can be mounted as low as possible!
Last edited by a moderator: Dec 1, 2016
DUGABOY1
DRSS Charter member
"If I die today I have had a life well spent, for I have been to see the elephant, and smelled the smoke of Africa" qt by Me 1982 (mac)

I have lots of muscle memory invested in over/under shotguns. What are the dynamics of over/under rifle scopes and sight regulation? Would a double barrel set with 9.3x74 and 20 gauge be desirable? Lots more bird than buffalo not to mention skeet shot around middle Tennessee!
B

OK ... very interesting!
Your opinion, please, about a "red dot" like Aimponit H1 .., Doctor, Trijicon and so on ? :hmmmer:
You must log in or register to reply here.

Those Thinking About Buying a First Double Rifle

N
How Many Rifles To Carry On Safari?