Joy of the Hunt: Why can't Postmodern Society Acknowledge its Inner Wild Man?
by Peter Shroedter 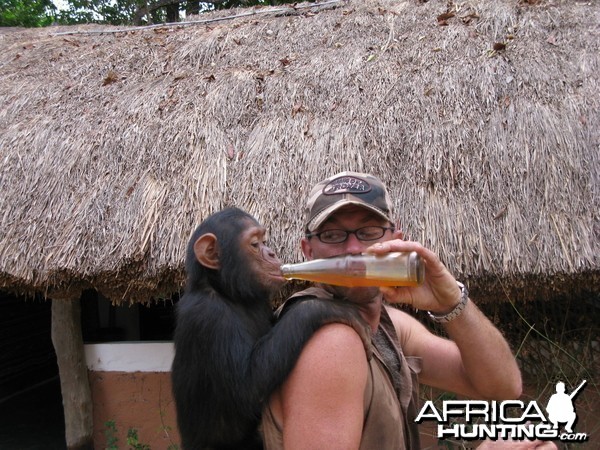 Hunting is a highly charged emotional issue, much like abortion, and people generally hold fast to the position they choose early in life all too often before they understand the consequence of their decision. Hunting is as natural an activity as falling in love and making babies. It's how families were sustained since the dawn of time.

The only people who can speak against hunting with some moral authority are true vegans; everyone else's comments are tainted by varying degrees of hypocrisy. Anyone who eats meat or uses animal products is responsible for killing on an industrial scale unimaginable in hunting.

Even the vegans' moral authority is in question when they criticize hunters because the market gardens that grow their vegetables have degraded the ecosystem and caused the demise of some wildlife somewhere. The cities and suburbs where they live have killed and displaced countless animals. The fact that they participate in our modern economy puts blood on their hands as well.

It is amazing how our society gorges itself nightly on virtual violence against people in movies and video games. We can also sit passively while politicians debate the finer points of genocide in far-off places and still somehow decry hunting. Perhaps this dichotomy should not come as a surprise in a society where most people live their entire lives without being part of the food chain except as consumers. In a culture where the word hunting is another word for killing, it is easy for earnest young people to conclude that hunting, like dog or cockfights, is part of a senseless brutal past.

The act of hunting in the pure sense of the word is a communion with nature and an acknowledgment of our species' past and its enduring dependency on the environment for survival. The fact that human beings are genetically programmed to hunt should be enough reason to acknowledge that hunting is part of being human. We are omnivores at top of the food chain, able to eat almost anything between meat meals, but it is meat that gives us the protein we need. It is the act of hunting that connects us to the essence of our existence and our dependency on our environment.

I've been a hunter since childhood and still hunt actively. I make no apology for it. The process of hunting has made me keenly aware of my place in the environment. Through hunting I learned early about the importance of conservation. It was through hunting I learned patience and perseverance and became a student of nature. I also learned about the sacredness of life and how all life is interdependent.

People who speak the loudest against hunting have turned the campaign to stop hunting into a very profitable industry. They choose to forget that it was hunters like Theodore Roosevelt who created the concept of national parks. They ignore that hunters pay for conservation efforts and give of their time to organizations like Ducks Unlimited and other conservation efforts that have undone the damage our modern economy has done to the environment.

The least part of hunting is the killing but you cannot hunt without intending to kill. In the words of Spanish philosopher Ortega y Gasset, in Meditations On Hunting: "One does not hunt in order to kill. On the contrary, one kills in order to have hunted."

One of the problems we have as hunters is that we do not talk about the hunt to non-hunters and when we do we make assumptions that non-hunters can appreciate the fine details of our passion without having experienced the "hunt." Hunters know about the range of emotions and state of heightened physical awareness that only the hunt can provide.

Non-hunters assume hunting is all about killing because to have blooded your own hands for something to eat is such a rare experience today. I have killed many animals for food because for most of my life, the only meat I ate was that which I slaughtered myself. There is no similarity between that bloody work and hunting.

When hunting with city friends I see the transition from urbanite to "the hunter" once we get into the bush and I point out the game sign. In less time than it takes to program a VCR, people who have never hunted before begin to see and hear things they never noticed before. They learn to sort out the forest sounds and begin to see in a new way. They begin to see the world through a hunter's hungry eyes searching for prey. They lose their sense of time and become acutely aware of minute changes in temperature and wind direction. As novices they can't understand the information their senses are detecting, which only increases the intensity of the experience. An excellent article describing the transition from urbanite to human hunter was written by Michael Pollan, for the New York Times entitled The Modern Hunter Gatherer, published March 2006. Pollan is an urbanite non-hunter and he took a walk in the woods with hunting friends. He used to scoff at Gasset and Ernest Heming- way for writing what he called hunting porn. But, before the hunt ended, he felt the depth of the emotions that hunting arouses and experiences what he calls "a cannabinoid moment."

Cannabinoids are compounds that affect the neurotransmitters, creating an intense sensory experience. I never knew the scientific cause for the altered physical and emotional state hunting brings on but it is the reason I hunt. I hunt to be part of the great thing that is the environment and to take my place in it.

Scientific explanations aside, suffice it to say that for many hunters, hunting is as important an experience and as spiritually uplifting as a religious pilgrimage.

So why, in a pluralistic society that tolerates so many spiritual pursuits, is hunting becoming an anti-social behavior. Is it that postmodern society is still afraid to acknowledge the inner wild man?
Last edited by a moderator: Dec 1, 2016
Gerhard R Damm
AFRICAN INDABA - Dedicated to the People & Wildlife of Africa

Avery valid article in today's society that has so many people against us hunters.
I find the same when I take city slickers bush. They just seem to change and a little switch flicks on in the brain. A great time to introduce them to game meat and target shooting.
Bob
You must log in or register to reply here.

Joy of the Hunt: Why can't Postmodern Society Acknowledge its Inner Wild Man?

Why Botswana Is Lifting Its Ban On Elephant Trophy Hunting

Why We Hunt: Two Important Perspectives