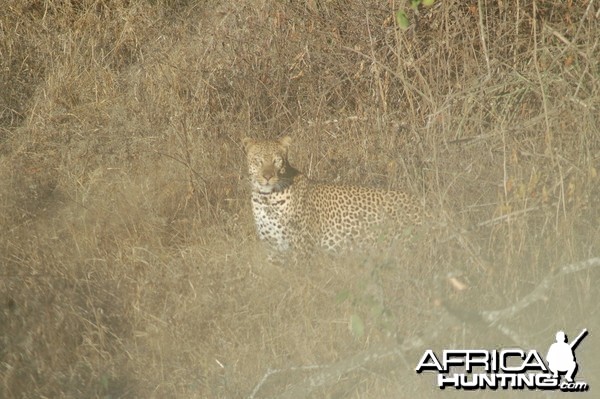 ABERDEEN, South Dakota, October 30, 2009 (ENS) - A leopard shot seven years ago in South Africa caught up with a South Dakota man in an Aberdeen courtroom today.

A federal jury in Aberdeen found Wayne Breitag guilty of smuggling the skin of a leopard into the United States in violation of the Convention on International Trade in Endangered Species, a treaty to which the United States and 174 other countries are Parties.

According to a grand jury indictment issued in August, Breitag traveled to South Africa in August 2002 to hunt leopards while guided by a South African outfitter named Jan Groenewald Swart doing business as Trophy Hunting Safaris.

Breitag shot and killed a leopard at that time.

Swart arranged to have the hides smuggled from South Africa into Zimbabwe, where he purchased a fraudulent CITES export permit for the leopard hide.

Breitag then submitted an application to the U.S. Fish and Wildlife Service falsely claiming that he hunted and killed the leopard in Zimbabwe.

On November 5, 2004, Fish and Wildlife Service inspectors seized a shipment of five leopard hides and three leopard skulls at the Denver International Airport, which included the hide of the leopard that Breitag killed illegally in South Africa in 2002.

On May 21, 2007, Swart pleaded guilty to smuggling charges in federal district court in Colorado for his role in the illegal hunts. Swart served an 18-month long prison sentence; he has since been released and deported.

Leopards, Panthera pardus, are listed on CITES Appendix I, which prohibits all international commercial trade in live animals or their parts, with exceptions for scientific research and a quota system for certain African countries

Legal international traffic in leopard parts is limited to exports of skins and hunting trophies under a CITES Appendix I quota system by 13 African countries.

The CITES authorities in South Africa set a yearly quota on the number of export permits issued by that country for leopards. These permits are issued only for leopards that have been killed with a valid hunting permit.

The authoritative Red List of Threatened Species compiled by the International Union for the Conservation of Nature, IUCN, classifies the leopard as Near Threatened.

Leopards have a wide range and are locally common in some parts of Africa and tropical Asia. Still, the IUCN says the species is declining in large parts of its range due to habitat loss and fragmentation, and hunting for trade and pest control.

Scientists estimate that leopards have disappeared from at least 36 percent of their historical range in Africa. The most marked range loss has been in the Sahel belt, as well as in Nigeria and South Africa.

The IUCN says, "The impact of trophy hunting on leopard populations is unclear, but may have impacts at the demographic and population level, especially when females are shot."

Safari Hunter you can say that again!!

It really sickens me what people do in our Safari "industry" in the pursuit of a fast buck and in the process bring down the image of all hunters and outfitters, something in this day and age we can ill afford happening.

These "gentlemen" deserve everything that is sent their way. The worst part of it all is that such a small percentage of these crimes are detected, I hope that this case and the possible penalties involved wake up any other unscrupulous individuals out there engaged in similar activities and act as a deterrent to them for future similar acts.

The population dynamics of solitary, secretive species like Leopard are such a mystery and the current export quotas in some countries are very generous and have never been completely filled, in fact some, on average, are only exporting 50 - 60% of the possible allocation, this with as many cat hunting days as the outfitters can fit into a season, clearly this situation is open to abuse by people in countries with less generous quotas (as happened here) and these current quotas should be reviewed before irreversable damage is done to this vulnerable species in all countries. The biggest problem is the lack of data on the populations and their densities in varying habitats, so there is no rule for a per square km population density and hence accurate quota setting, this also means no-one really knows what impact the current levels of hunting are having on these ambiguous populations. With the advent of hunting outside of huge wildlife concessions, i.e. on privately owned smaller areas, the fact that adult males have huge home ranges means that several land owners are applying for permits to hunt the same male as he is present on all of their areas, obviously, easily leading to over-hunting in some districts or provinces. Many areas in this situation rely on displacement from adjacent National Parks to maintain a population, but often the males are shot before mating or if not before their offspring have passed a year old where if a new dominant male finds them before then he will kill them to get the female to come into season again so he can get his genes into the system, obviously this high turnover can cause huge secondary mortalities in areas where it occurs and spreads further than the "simple" hunting of males.

Don't get me wrong, there are good viable populations of Leopard in many places across Africa, but there are some areas where things are not so good, I really feel this needs to be addressed before it is too late for those populations.

Sorry I have sort of digressed, but it is all part of the big picture for the continued success of Leopard populations across Africa.
T

Thanks to some good work done by the USF&WS these poachers will be wearing stripes instead of spots. Although I feel it would be much more appropriate that he serves his time in a South African prison, I hope he thoroughly dislikes his time spent in the grey bar hotel here in the U.S. I am curious to hear if the poacher from the U.S loses his hunting privileges here in the States.

ABERDEEN, S.D. (AP) - An Aberdeen man who is awaiting sentencing for smuggling the hide of a leopard he shot from Africa into the United States has had his bond revoked and been turned over to the U.S. Marshal's Service.

Federal Judge Charles Kornmann says Wayne Breitag (BRY'-tag) violated the terms of his bond by driving into a walk-in hunting area while deer hunting earlier this fall in McPherson County.

Breitag says he thought the land he was driving on was a designated trail that could be used by vehicles.

Breitag was convicted earlier this fall in the smuggling case and is to be sentenced Feb. 1. He faces up to 20 years in prison.


WASHINGTON - Wayne D. Breitag of Aberdeen, S.D., was sentenced in federal court in Aberdeen yesterday to pay a $20,000 fine and serve six months of home confinement for smuggling the hide of a leopard into the United States in violation of the Convention on International Trade in Endangered Species of Wild Fauna and Flora (CITES), the Justice Department announced today.

The leopard was hunted and killed in South Africa illegally and then smuggled into Zimbabwe to obtain a false CITES-permit for shipment to the United States.

Breitag was also sentenced to serve three years of supervised release during which time he cannot hunt or accompany anyone on a hunt and must forfeit the hide. He was convicted by a jury on Oct. 30, 2009, for violations of the Lacey Act, the federal wildlife statute that makes CITES enforceable.

Leopards (Panthera pardus) are listed on Appendix I of CITES. CITES requires that prior to the transport of any part of an Appendix I species from one country to another, an export permit from the country of origin (or a re-export certificate), and an import permit from the country to which the specimen will be shipped, must be obtained and accompany the shipment. The CITES authorities in South Africa set a yearly quota on the number of export permits issued by that country for Appendix I species, such as leopards. These permits are only issued for leopards which have been killed with a valid hunting permit.

Breitag was found guilty of traveling to South Africa in August 2002 to hunt leopards while guided by a South African outfitter named Jan Groenewald Swart doing business as "Trophy Hunting Safaris." Breitag shot and killed a leopard at that time.

Swart arranged to have the hide smuggled from South Africa into Zimbabwe, where he purchased a fraudulent CITES export permit for the leopard hide. Breitag then submitted applications to the U.S. Fish and Wildlife Service (USFWS) falsely claiming that he hunted and killed the leopard in Zimbabwe. On Nov. 5, 2004, USFWS inspectors seized a shipment of five leopard hides and three leopard skulls at the Denver International Airport, which included the hide of the leopard that Breitag killed illegally in South Africa in 2002.

On May 21, 2007, Jan Groenewald Swart pleaded guilty to smuggling charges in the U.S. District Court for the District of Colorado for his role in the illegal hunts. Swart served an 18-month prison sentence, has since been released and deported.

The investigation of this case was lead by the USFWS. The case was prosecuted by the Justice Department’s Environmental Crimes Section and the U.S. Attorneys’ Offices for the District of South Dakota and Colorado.

I am glad justice is served for story's like this gives all the South African Outfitters a smack in the face!

Rod Smith, your understanding of the current dynamics in Leopard conservation are evidence that you have some involvement, or at least completed some research, in the matter.
There is an organisation called Mun ya wana, operating in Northern KwaZulu-Natal province of SA, which have completed some comprehensive research regarding the specific impacts of trophy hunting on a fairly isolated population of Leopard.
They are based in the Phinda reserve and are bordered by a combination of tribal land and private hunting ranches.
Check out their website here:
Panthera

Ultimately, if we are to responsibly consider the sustainable use of Leopard in the hunting industry, we must improve the skills of the Professional hunters, make use of hunting methods which are single animal selective and complete a population dynamic research of the hunting area prior to commencing the hunt.

I think the new Namibian predator ordinances have implemented most of the required procedures to insure the hunts are completed in this way. It is just a pity that they did not include the use of hounds as there is no method that can compare with the single animal specific qualities of being able to select an individual Leopard by track and pursue only that individual, that hunting with dogs provides.
Gav Lipjes
You must log in or register to reply here.