How did everyone make out at home this year? Post some pictures

I haven't had a lot of time hunt due to uncle sugar here at Fort. Campbell for the past couple years. I did get back to WI for a buddies wedding and was able to smoke a few ducks the morning of the wedding. Missed the KY deer season due to being in the field for most of the duration. I'm reenlisting soon... Germany (so I can get a smoking deal on a heym) or Alaska so I can get some good hunting in. I love being in a combat arms unit but I'm thinking the hospital will give me a little bit more leeway. 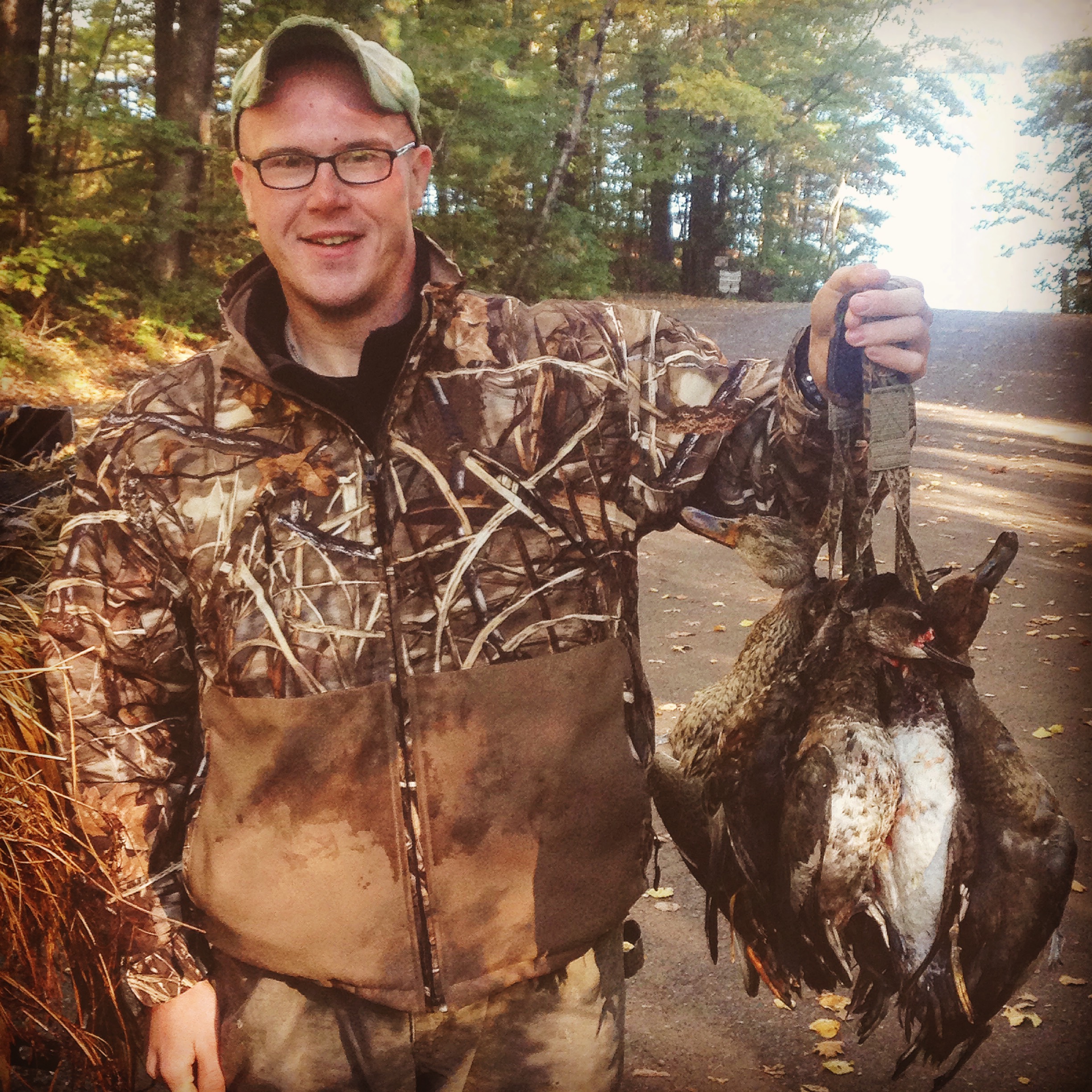 The rut in Alabama has finally started this weekend and things have started off right. I got a few does down this year and finally a nice buck with my rifle. Starting this afternoon I am bowhunting.

This buck came up after I shot a hot doe at daylight, he was in the thicket and was raking the dead doe with his horns to the point he had blood on his horns. This went on from 7:30 am till about 8:00 am at which time the buck wandered off. After this I hit the bleat can and 3 bucks came in. A fork horn, a cow horn and a seven point. After a few minutes the buck I shot came charging back in and fought the seven point about 40 yes from my stand where I could see them, but they were in a thicket. After driving off the seven point this buck started making a rub and a couple of scrapes until about 9:00 am when I hit the bleat call again. With this he came out of the palmetto thicket at 60 yes into a road where I took a broadside shot dropping him in his tracks. 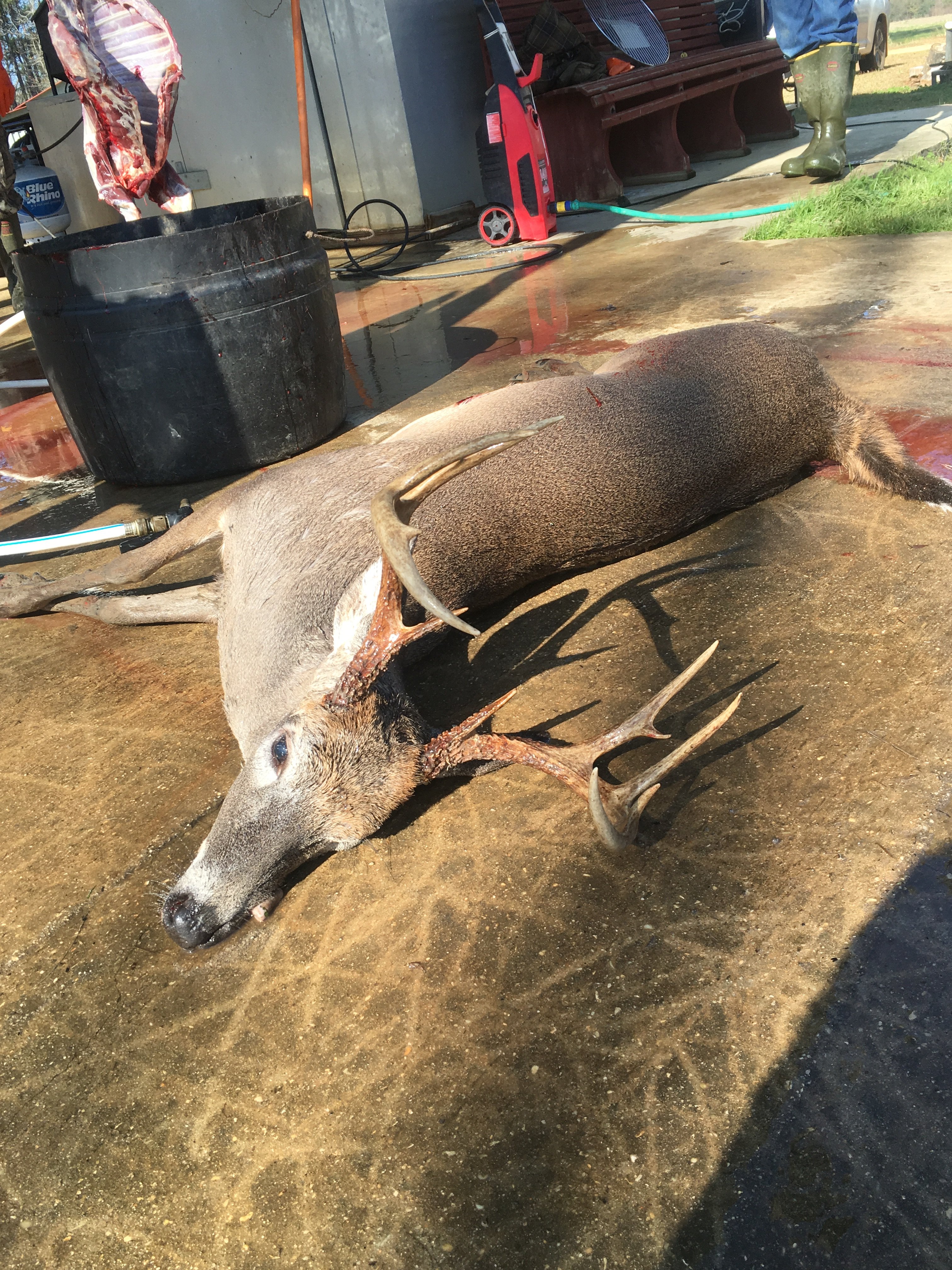 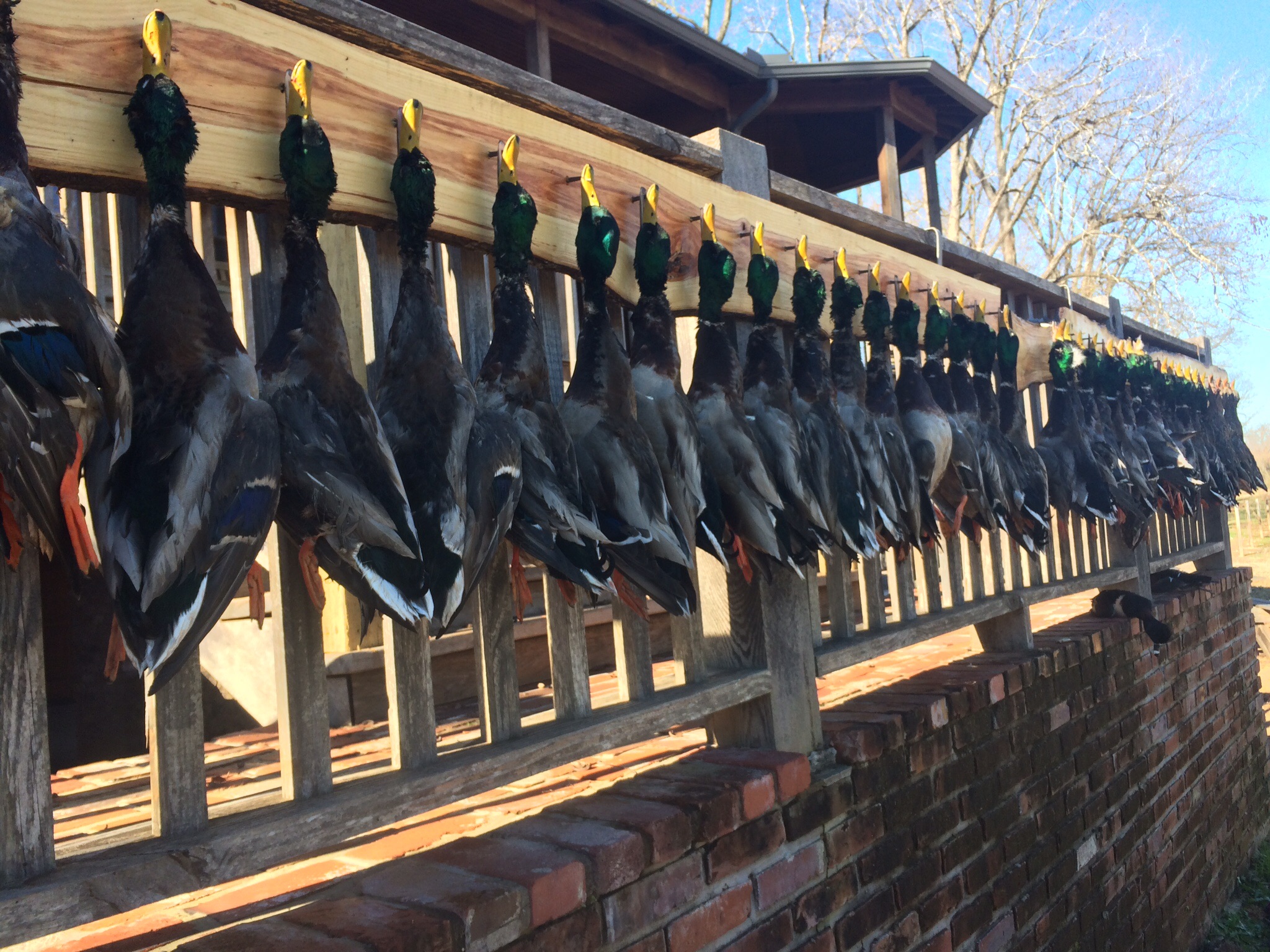 thriller said:
On an unrelated hunt a few weeks ago we did well on mallards at a friend of mines campView attachment 54066
Click to expand...

Damn Thriller! What I wouldn't give to hunt greenheads like that. We just don't get them quite as thick here in Colorado, although some private properties near the border get a few good runs. Good job!
Facta non Verba
A

I had a great year in Alaska. I was able to get first grizzly. It was a small sow, but she was a beautiful blonde. Had spotted a large blonde boar that we had seen the year before and put an unsuccessful stalk on. While beginning to hike towards him we spotted this sow about 300 yards upwind with the morning sun blinding if she looked in our direction. With everything in our favor we got to less than 100 yards before settling in. Dropped her on the first shot but put a follow up into her to ensure there was no tracking through thick brush.
Next hunt was a great one on Kodiak island. Was able to take a beautiful old nanny goat the next to last day of the hunt. Also got a few ducks and a red fox on the hunt. The group of us ended with lots of ducks, 2 nice blacktail bucks, 1 nanny goat, and a red fox. 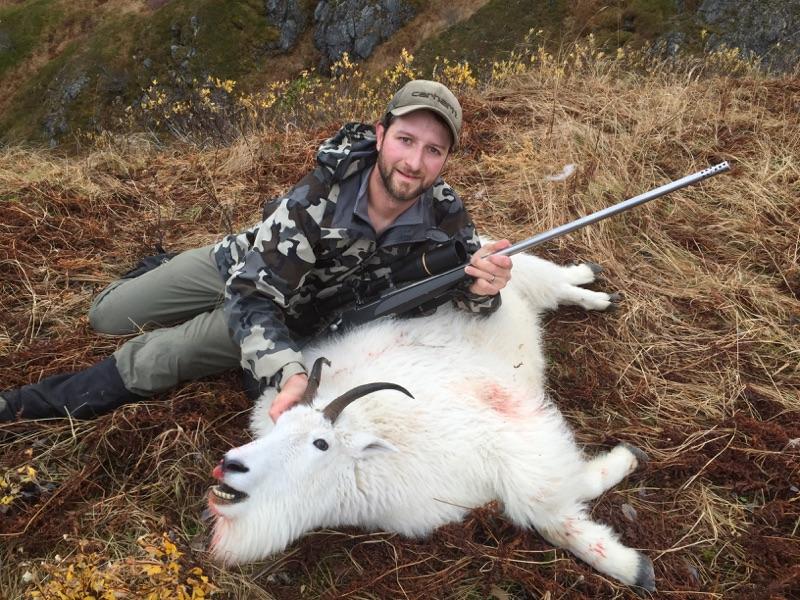 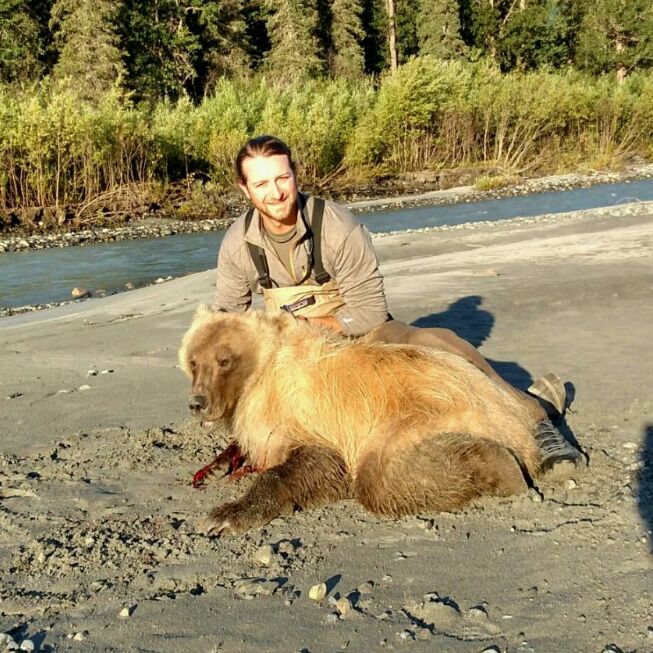 Heading out right now to go for one last kick at the season.

The cover you get to work with. 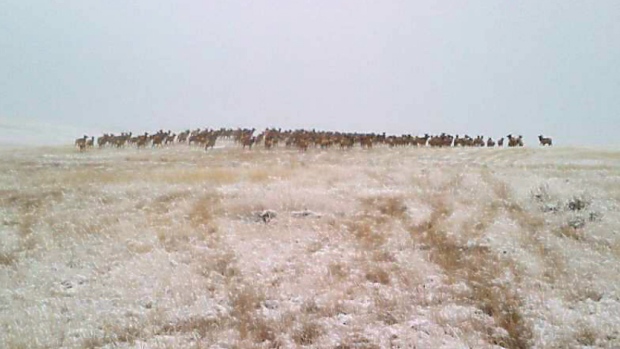 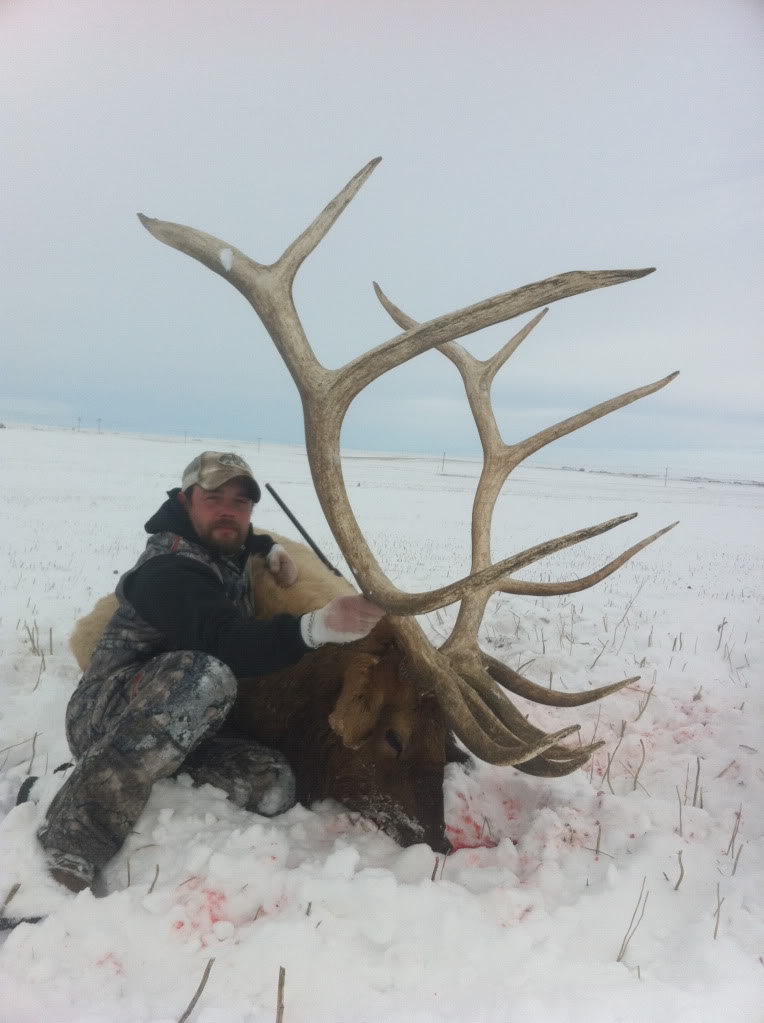 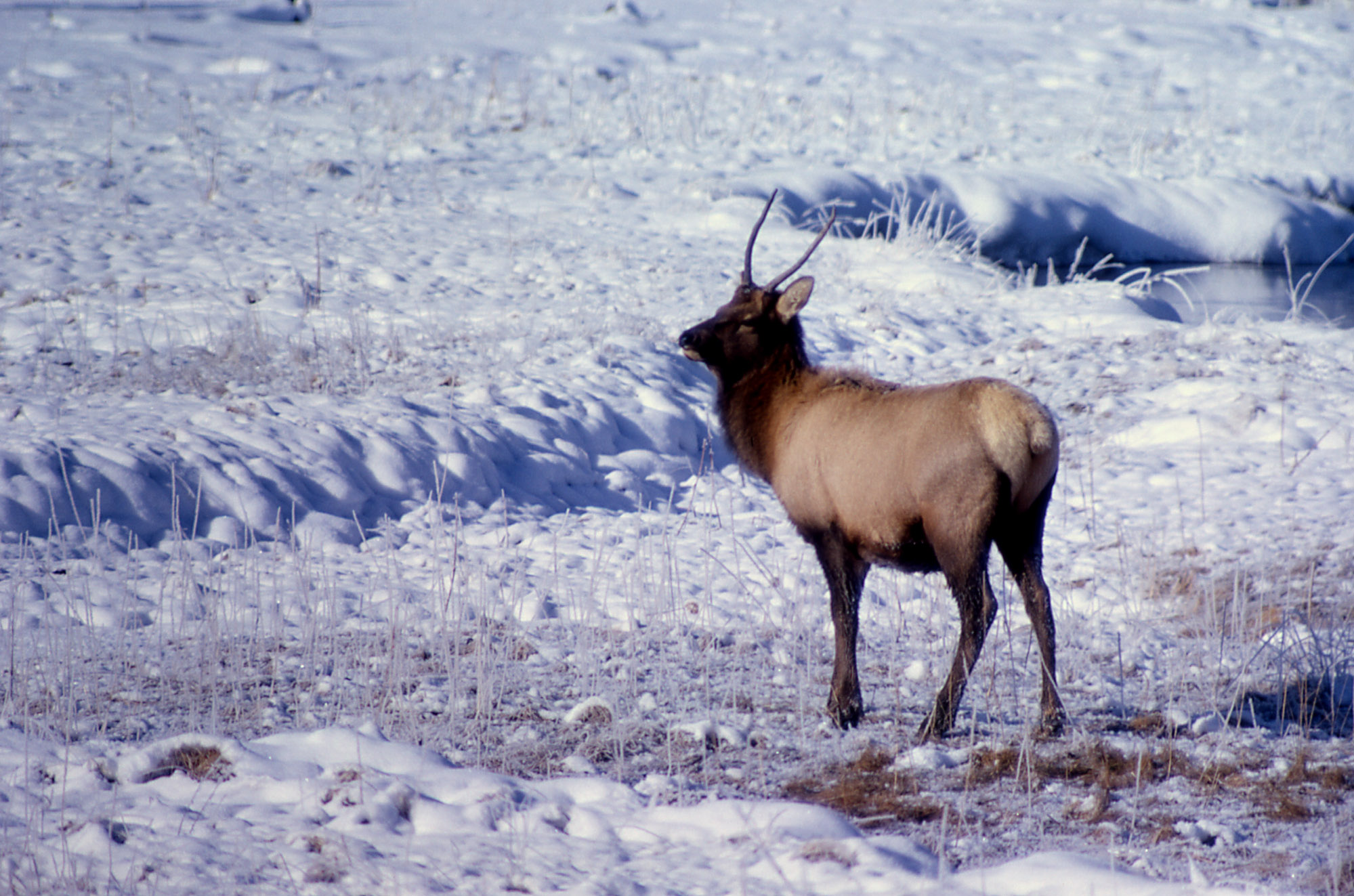 Good luck Wayne, there are some monsters there!

Is that bull you posted from the block?
Why we hunt, even lions? Real hunters need thriving wildlife, so we help make it happen. - Olivia Nalos Opre

Diamondhitch said:
Good luck Wayne, there are some monsters there!

Is that bull you posted from the block?
Click to expand...

Derek, It is from the Block.

The hunt yesterday started late, as is apparently typical. Stragglers (hunters) dragging in and registering.
Then a delayed "briefing" : "Don't pick up the bombs stupid." (Active Military base)
Oh yeah, someones vehicles was shot last week, so don't shoot at long distances and skylines and over hills!
(Ricochets apparently hit a truck last week)
Don't flock shoot, wait until the animal clears.
I can not believe I am being told this.

Delayed because of FOG. Held back another half hour.
Daytona 500 race to get into the base. not for me.


Entire day of fog and ZERO sighting on ungulates. A few Antelope tracks.
One Coyote,( protected)

At this late stage the Elk Herds are now trained. Stay in the OOB area in the Sanctuary and you are safe.

150 hunters and the grand total - One fork horn elk calf someone bumped in to.

Clear and mushy this morning and all the critters in OOB.
Went and scouted hunting areas on the way home and got pictures of wildlife.

This little calf was hiding a willow swamp. Nice to see twins out on the prairie. 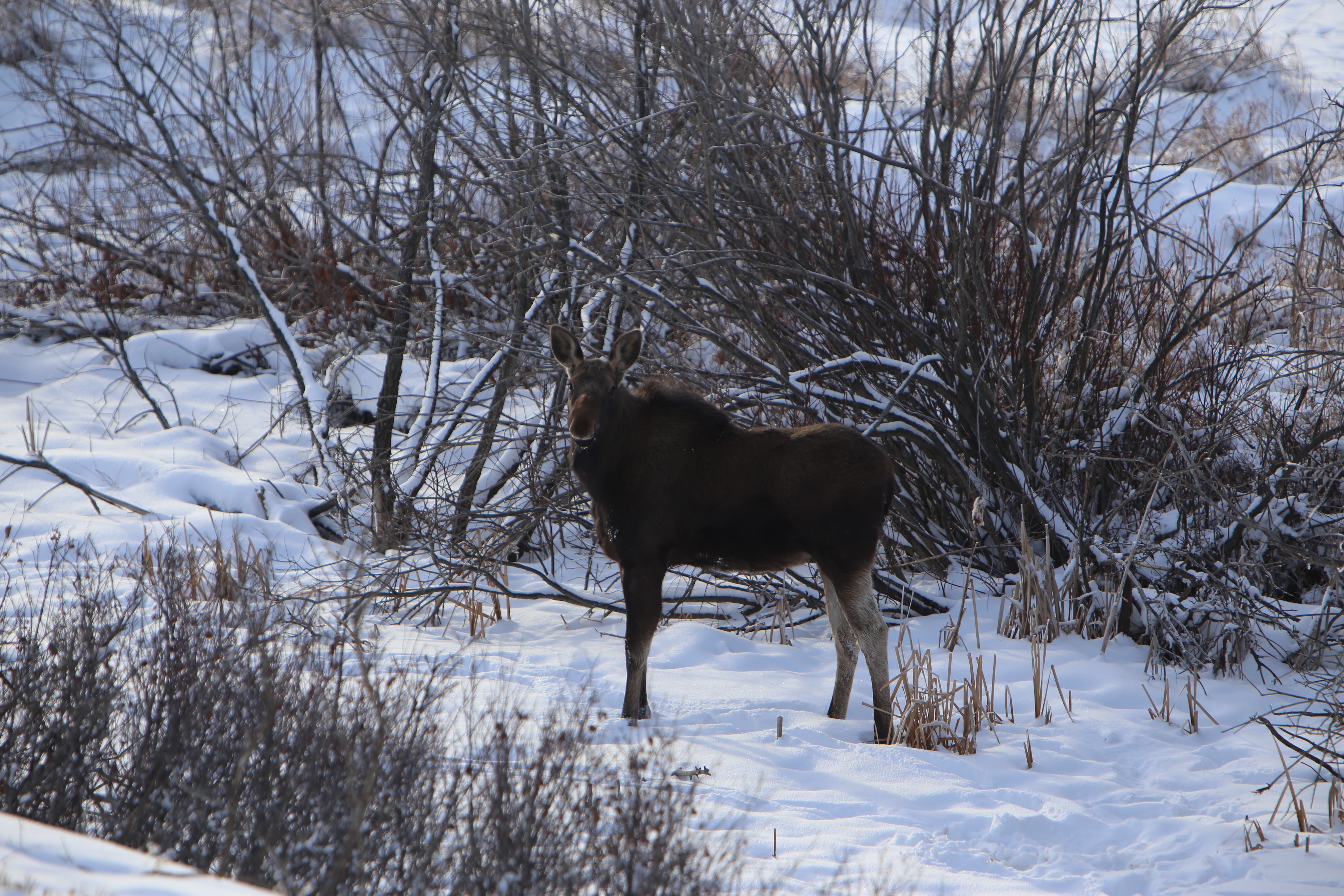 I took this snap shot as this monster (look closely) crossed back into the base. 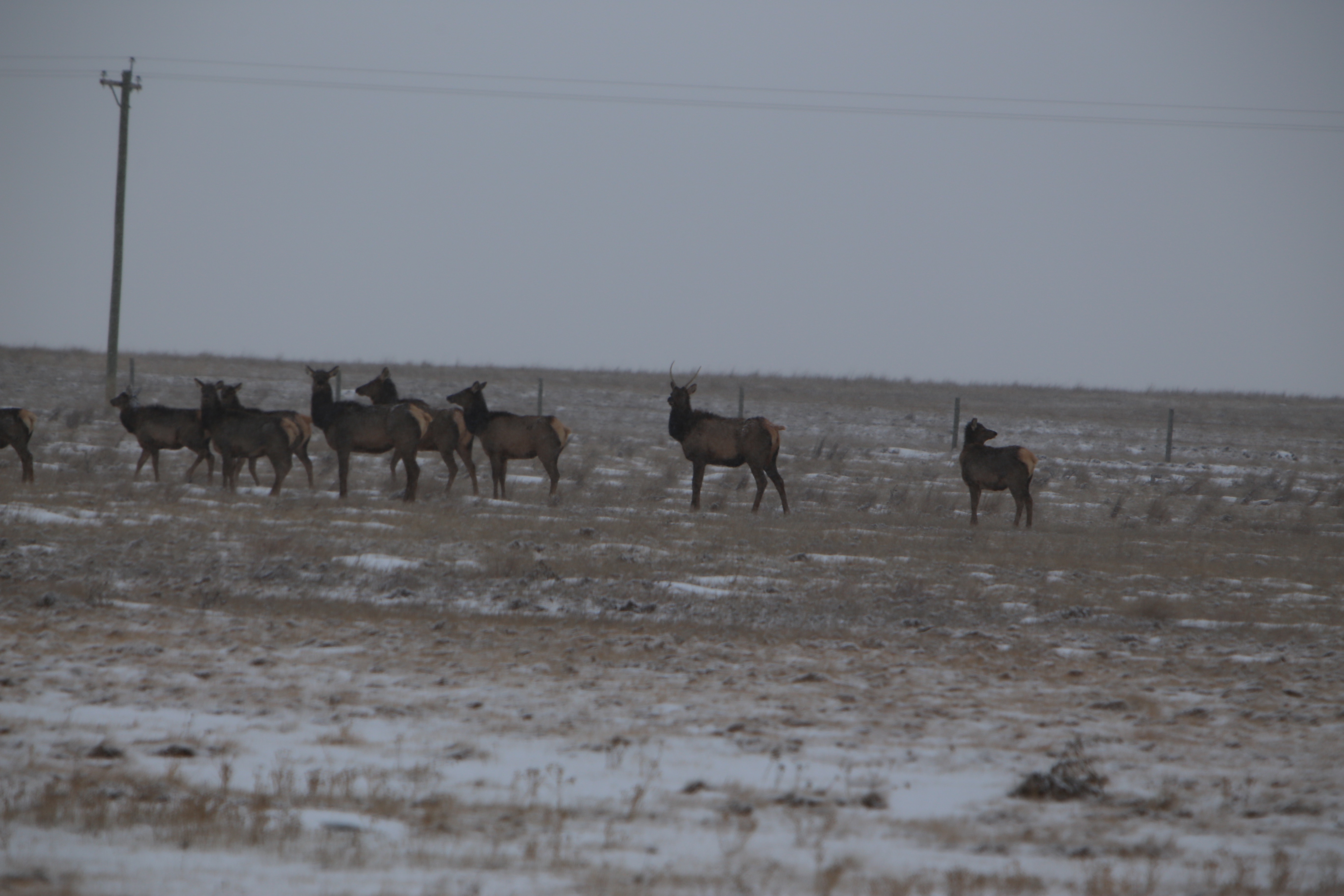 Kicked these boys out of their beds to get a better look at the head gear. Nothing too good, but they are "one day bucks" 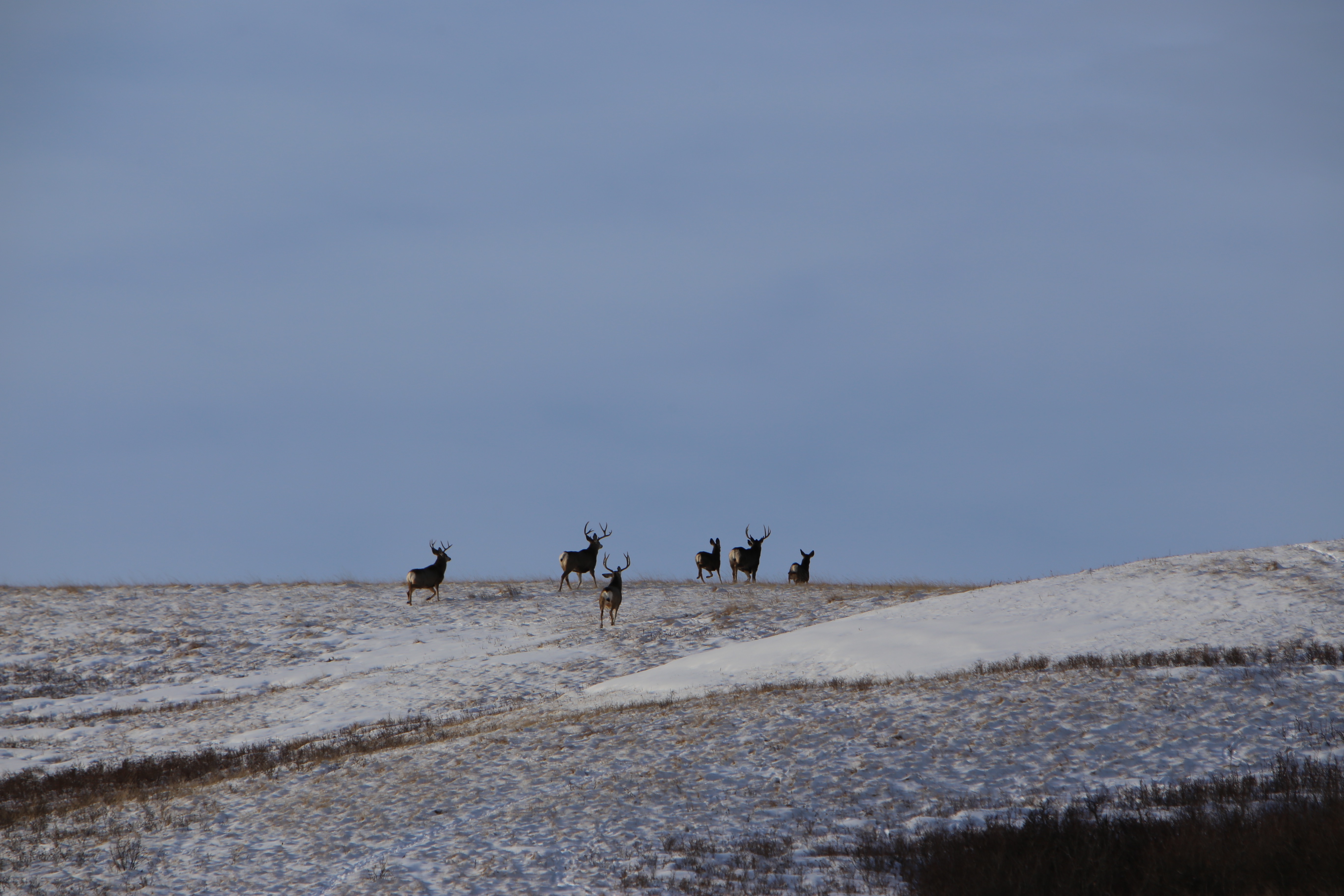 Thankfully, there is some wildlife outside of the National Wildlife Area.


Nice aged Rum this afternoon and I'll spend the gas money saved on a Lotto ticket.
Much better probability of winning.

Now officially into Next Year Country!

Looks like the residents that don't require licences filled their quotas at Suffield as usual
"A man and a gun and a star and a beast are still ponderable in a world of imponderables." Robert C Ruark

Drove to Calgary yesterday.....that fog was still thick from Suffield to Brooks and that was at 13:00. Big herd of elk just on the west side of the highway (off base).

vinnymbogo said:
Drove to Calgary yesterday.....that fog was still thick from Suffield to Brooks and that was at 13:00. Big herd of elk just on the west side of the highway (off base).
Click to expand...

Fog never lifted in the hunting area.
We were told they were all off base or in OOB. Oh, well.

That's too bad about the fog @BRICKBURN . Those elk are pretty educated now for sure. I know a couple of guys that had the first bull hunt and wasted a P 12 on it and were very pissed at all the " special rights Canadians " shooting everything that moved and wrecking other people's hunts!

BRICKBURN said:
Fog never lifted in the hunting area.
We were told they were all off base or in OOB. Oh, well.
Click to expand...

Ya can't shoot what ya can't see!

There's an elk farmer about 50 Km away from here who lost a herd of elk when they broke out of his fence a few months ago. They have turned feral and are getting into stored grain and hay stacks and other such mischief. The elk farmer just announced he has given up trying to round them up and will take $500 each from anyone willing to shoot them for him. The herd is not far away the last few days, about a 10 minute drive. I need to check with the authorities about legalities, but if legal I might just give it a go, more fun than ice fishing.

Longwalker said:
There's an elk farmer about 50 Km away from here who lost a herd of elk when they broke out of his fence a few months ago. They have turned feral and are getting into stored grain and hay stacks and other such mischief. The elk farmer just announced he has given up trying to round them up and will take $500 each from anyone willing to shoot them for him. The herd is not far away the last few days, about a 10 minute drive. I need to check with the authorities about legalities, but if legal I might just give it a go, more fun than ice fishing.
Click to expand...

I think the fish cops will see the ear tags on the ranched elk, so you shouldn't have a problem. You also might ask for a bill of sale from the rancher [owner of the elk] to avoid complications should you be pulled over. Good luck...and $500 is not bad for a freezer full of meat and hopefully a nice rack to boot!

Today was another fine day to be a redneck from Alabama, so I did what we do in late January and put on the mosquito repellent and hit the deer woods to catch our rut. After spooking a 200lb ish boar I got settled in to a ladder stand overlooking a creek bottom. After about an hour a 8 point stepped out of a thicket at 20 yards being the largest 8 point I have ever seen on our property I promptly shot the magnificent beast and for your viewing pleasure here it is, it shall take up its new residence in my rec room as soon as the taxidermy is complete.
-"You don’t hunt turkeys because you want to; you hunt turkeys because you have to." —Tom Kelly
-“Look deep into nature, and then you will understand everything better.” — Albert Einstein
-"Accept the challenges so that you can feel the exhilaration of victory." George S. Patton 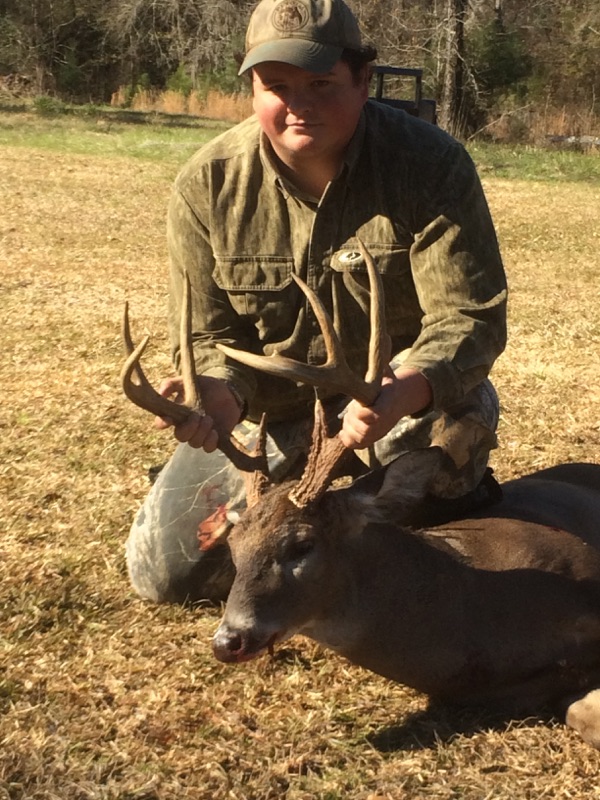 Nice deer! congratulations
You must log in or register to reply here.

Colorado Draw Results are out, what did you draw?
2