After an "Act of madness", I have two rifles .458 Winchester-Magnum in my gunrack. Probably, I do not need even one. But anyways, there is always someting to improve.
Does ist make sence, to altern one to .458 Lott. I had a close look into Norma´s Reloading Manual #2.
.458 Winchester seems to perform better than .458 Lott, even with a shorter barrel! Are there any experiences out there? From the chronograph and from field....

HWL said:
.458 Winchester seems to perform better than .458 Lott, even with a shorter barrel!
Click to expand...

Interesting ! I was on the fence about the Lott as I have two 458 WM already. I will be interested to see what AH sage members say about the comparison. thank you for posting.

The Lott as I understand it was created because the 458 Winchester lacked the punch of it's newer cousin. I have heard it said that with more modern powders hand loaders can increase the capabilities of the Winchester.
@HWL in what areas do you see the Winchester outperforming the Lott as I would like to understand?

CAustin said:
The Lott as I understand it was created because the 458 Winchester lacked the punch of it's newer cousin. I have heard it said that with more modern powders hand loaders can increase the capabilities of the Winchester.
@HWL in what areas do you see the Winchester outperforming the Lott as I would like to understand?
Click to expand...

But the Lott is a much bigger (longer) case, and I expected a little more punch....

As already stated, proper shot placement is/should be the primary goal. If you are comfortable/accurate with your WM your option should be a pretty easy choice. Have you have ever had a chance to test fire the Lott to give you a comparison in regards to recoil?
In regards to the WM outpreforming the Lott, I personally have never read or heard that info.
Best of luck on your final desicion.
Nathan T.
R

The 458 Win Mag has a water capacity to the bullet base of 86 grains. Compared to other "African" cartridges this is rather miniscule and would seem to be insufficient to propel a 500 grain bullet to the desired velocities. However with proper powder selection pressures of 62K psi can be developed and with sufficient duration that muzzle velocities over 2000 fps may be obtained. This was the goal of the Winchester designers. The limitations are that the powder selection that will achieve this goal is limited. Some powders are so heavily compressed that the burnrate is disrupted and situations such as Mr. Lott endured may result. Faster burning powders achieve the desired pressure with less volume so as not to be compressed, but have insufficient duration to get the bullet to the desired velocity. But there are powders presently available that give the desired results. The advantage of the Lott is that it has about 10 more grains water capacity which translates to about 12 more grains of powder space, so more powder of slower burnrate may be used to provide more acceleration to the bullet and achieve higher velocities, or Win Mag velocities may be achieved with a larger list of suitable powders. the result is an equal velocity with lower peak pressure is possible due to longer duration with the Lott.
The increased case capacity opens the doors to several options. But with all options there is a trade-off. Before I had the barrel rechambered I'd list the advantages and disadvantages of each and place the items in a listing of importance to me. Reviewing the list would show which cartridge is best for me.
C

Doesn't really make financial sense, but it makes sense performance-wise. ..if you have a use for the performance. However, I suggest taking a look at the .450 Watts. The Watts is the forerunner to the Lott and preceded it by many years, but Watts wasn't a gun writer. One can shoot Lott or Win Mag in the Watts. A PH friend of mine has a Watts and loves it. The Lott is better known nowadays but, as I said, Watts wasn't a gun writer. The only reason I haven't changed over to .450 Watts from my .458 Win Mag is because my .458 Win Mag is a custom job and the action simply isn't long enough for the Watts or Lott.

Maybe something interesting mentioned by Terry Irwin, PH in Tanzania , the Selous Game reserve many years ago.. He used a .458 Mannlicher Schoenauer, custom made for him by the Mannlicher Schoenauer company...he ordered a custom fitted .458 MS since it had a rotary magazine that will not drop rounds out when using it in stress fire situations..as Richard Harland had used as well....Terry ordered it in a 24" barrel length..The company refused and stated that the barrel needs to be 26" to 28" long to ensure sufficient burning of the propellant to ensure proper muzzle velocity . Terry had to get use to the longer barrel but mentioned it never bothered him..
According to him the .458 MS killed every elephant and other dangerous game dead...he was a proponent of shot placement as the only criteria to consider when shooting at dangerous game...or any game ...

I used a Westerly Richards .458 and various other large calibres with Mauser type actions. One of the problems I experienced with all of them was magazine plates popping open and spilling all the rounds or, when flicking the bolt open quickly, the top round may pop up right out of the magazine causing a jam. This problem was solved with the Mannlicher's revolving magazine. It holds each round individually and feeds one at a time and the base plate does not open on a hinge. The barrel is also longer than other .458s. I requested a shorter barrel when I had mine custom made but they refused to shorten the barrel saying it would not be ballisticly perfect with a shorter barrel. I did not experience all the under powered shots, with early Winchester ammunition, that gave the .458 a bad reputation when it first came out. I think this was because of the longer barrel. The action is also the smoothest I have used but I had to get used to using the flat bolt I would have preferred a straight bolt with a ball end. Otherwise I think the Mannlicher Schonauer is the best .458 I have used. Enjoy7 it! - Terry

Although, the longer .458 Lott version really looks good, bigger and potentially more dangerous than the .458 WM round when standing alongside each other.....

I fired an old 500 gr FMJ Winchester Cartridge in the long barreld Mannlicher. 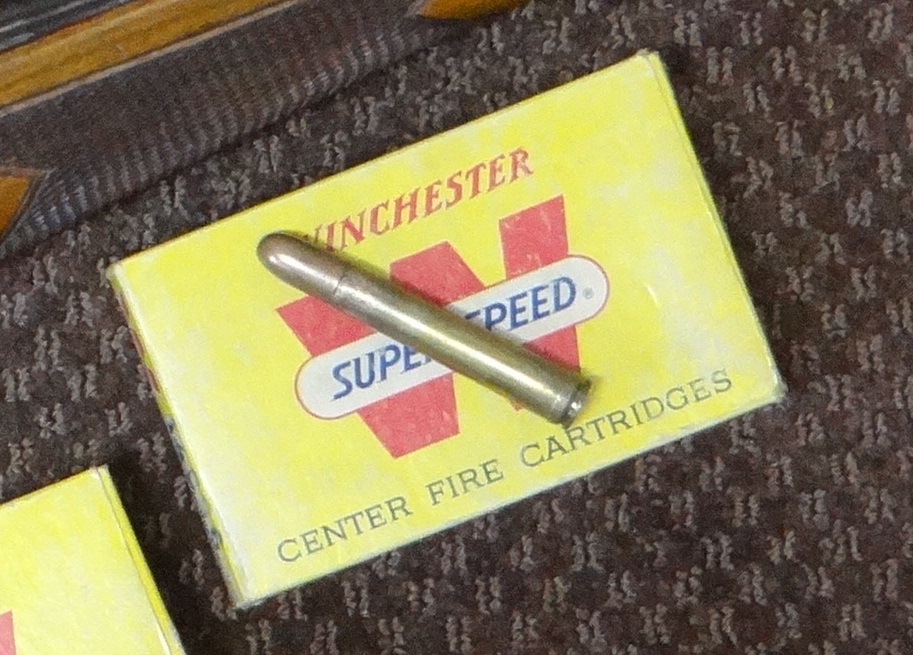 HWL
Relying on Mauser M98,.... but having an ever lasting love affair with Mannlicher-Schoenauers....
A

Hendershot's does a lot of DG custom ammo and this is what's listed on their webite. Not a huge difference in velocity or price. 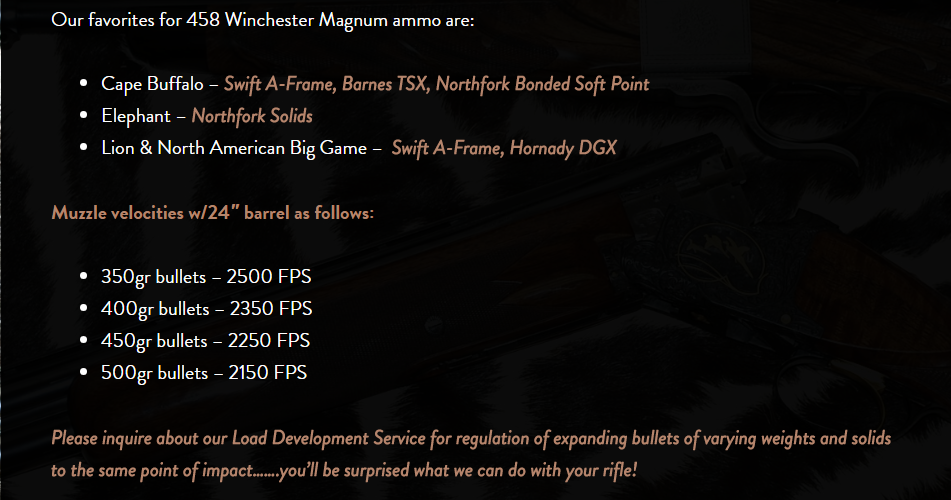 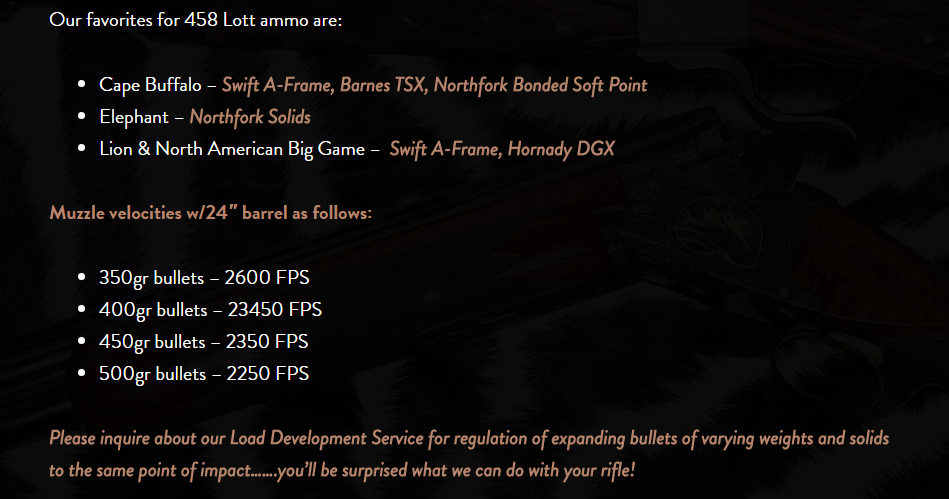 Relying on Mauser M98,.... but having an ever lasting love affair with Mannlicher-Schoenauers....

So if I was tempted to buy a 458, seems like it makes sense to get the Lott and it can shoot either. If anyone already has a 458 WM, it's not a big enough jump to a Lott to justify getting one. Of course, one should never let sound reasoning and good judgement get in the wasy of a gun purchase.

BC.Pat said:
Interesting ! I was on the fence about the Lott as I have two 458 WM already. I will be interested to see what AH sage members say about the comparison. thank you for posting.

If going to South Africa or Namibia I suggest you check the availability of factory ammo in case yours goes astray
I believe, personally, tHat it's a matter of Bullet placement rather than 100 fps for example
I don't like short barrels even though they make finding the target fractionally quicker
It's the muzzle blast for those near you I think is an issue

Maybe another interesting factor I should mention about Terry Irwin when he worked as a geologist for Anglo American company in Tanzania back in those years. He ( other prospectors ) were not allowed to have rifles with them when traversing the vast expanses of the Tanzanian wilderness searching for minerals , diamond rich deposits. Terry mentioned one fact that he learned to become a great skill assisting him in the future was to learn the body language of game. This afforded him the skill to get extremely close to dangerous game animals he later cull, hunt or getting his clients extremely near their quarry.
This on it self is a great advantage when hunting these dangerous game with a client..it afforded the client a much bigger chance to get shot placement correct...using any caliber from .375 H&H upwards on dangerous game when you are a few feet of your quarry really gives a hunter an edge...
Clients hunted with Terry Irwin, numerously mentioned his skill in getting them sometimes just out of arm`s reach of their dangerous game animal they hunted...
Bush craft skills seems to be less important with hunting scenarios today since time is of the essence and safari hunting is too expensive to make time for walk and stalk hunts .

HWL
Relying on Mauser M98,.... but having an ever lasting love affair with Mannlicher-Schoenauers....
You must log in or register to reply here.