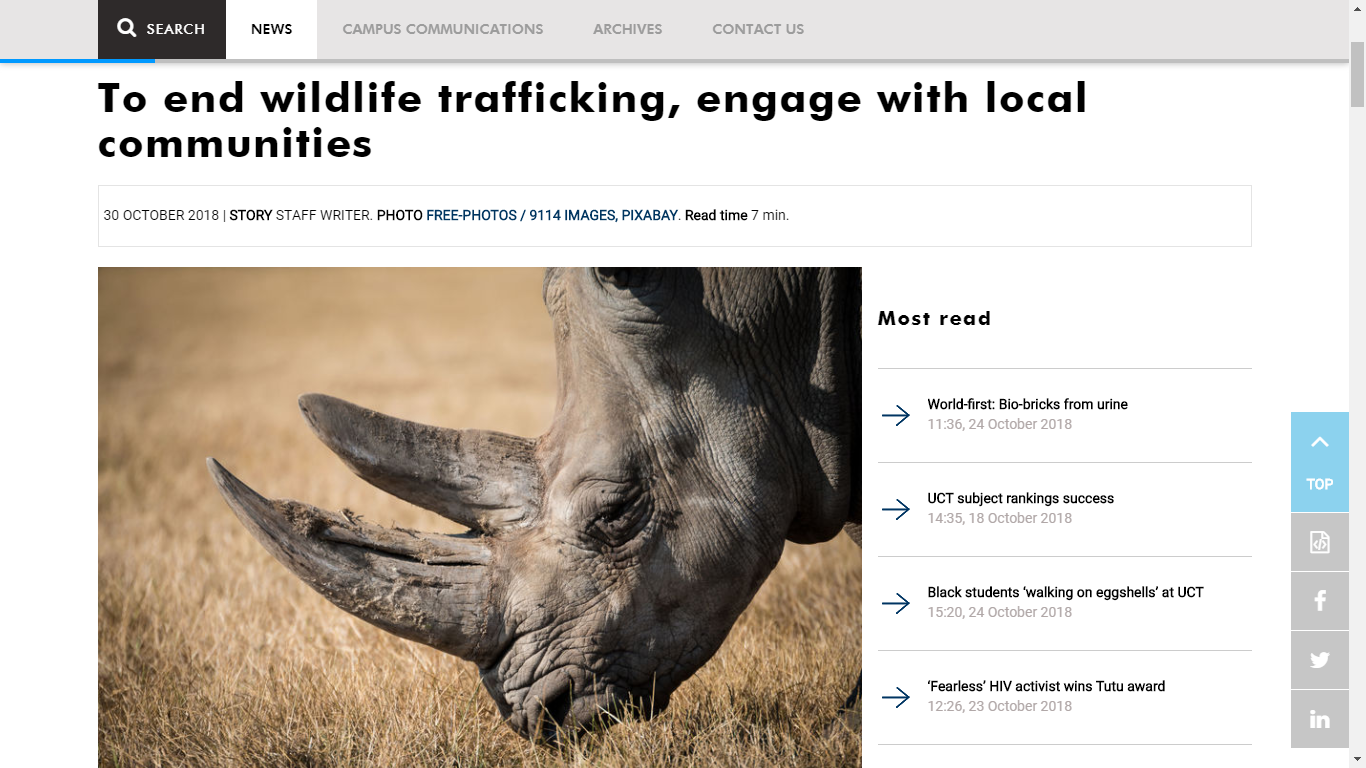 The international donor community and governments have invested heavily in fighting illegal wildlife trade, but so far, they haven’t succeeded in ending rhino poaching. New research from UCT shows that for these initiatives to succeed, local communities – many of which live in or near protected areas – need to be involved.

Local communities in rural areas in South Africa tend to be on the periphery of basic service delivery and only a few conservation initiatives partner with or enrol local people in their work. As such, often the only benefits community members can gain from wildlife economies are through poaching.

The study aims to show how to change the incentive structures for members of local communities so that they participate in legal economies rather than illegal wildlife trafficking. Some of the case studies in the report illustrate how former poachers and wildlife traffickers have turned into wildlife guardians.


"The study aims to show how to change the incentive structures for members of local communities so that they participate in legal economies rather than illegal wildlife trafficking."


“In such instances, we have documented examples where poaching numbers were lower than in other protected areas where local communities are excluded from beneficiation, ownership and management,” says Hübschle.

Although the study focused on rhino poaching, its findings and recommendations are applicable to all forms of wildlife trafficking. The pangolin, for example, is now considered the most trafficked animal in the world, and cycads the most threatened plant species.

While rhinos may be protected by the South African National Defence Force, looked after by wildlife veterinarians and given supplementary food and water by conservation authorities, some of the communities living nearby do not have a permanent police presence, basic healthcare facilities, schools or shops.


“...we have documented examples where poaching numbers were lower than in other protected areas where local communities are excluded from beneficiation, ownership and management”


There are, however, limits to what conservation authorities can do to uplift communities that live near national parks. Hübschle highlights the need to “explore other forms of rural employment, resource sharing and income generation beyond hunting, anti-poaching and tourism.”

She recommends that the needs of conservation initiatives be provided through community empowerment projects that contribute to teaching community members the skills to develop and maintain their own projects. Furthermore, women should be involved in mediating positive conservation outcomes.

“Women command considerable power and influence in the communities in question,” Hübschle explains. “In light of the patriarchal structure of many rural African communities, this suggestion may appear counter-intuitive. However, there are countless examples that demonstrate that women can exert a strong influence on conservation outcomes.”